Briefings: Ramos Gets a Spotlight during Warren Visit… 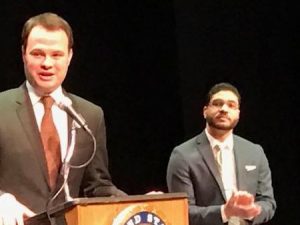 SPRINGFIELD—During her visit here Monday, US Senator Elizabeth Warren received a warm introduction from State Senator Eric Lesser. It was hardly their first interaction. Warren campaigned for Lesser in each of his runs for the 1st Hampden & Hampshire district. But the event also offered a big moment for Orlando Ramos, the City Council’s new president.

As moderator, Ramos announced numbers attendees received upon entry. Those called then asked a question. It was a modest role, but an important one and perhaps the highest profile political experience he has had since joining the Council. The turn in the spotlight comes as Ramos makes his own mark leading the city’s legislative body.

“I realized it was something bigger than just saying a few words in front of a big crowd,” Ramos said in a brief interview after Monday’s Council meeting.

Ramos said he got the call over the weekend from Warren’s staff while taking trip to New York with his daughter. 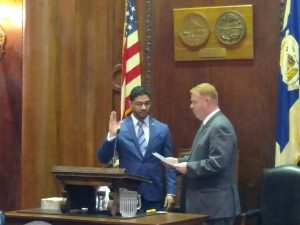 City Council presidents in Springfield can be a visible position, but rarely beyond the city itself. Ramos’ predecessor, Michael Fenton, was a rare exception in part due to his three years as president. But Fenton was also a prominent supporter of former Treasurer Steve Grossman, who ran for governor in 2014, adding to his profile.

Elected to represent Ward 8 in 2013, Ramos became council president this past January.

It’s not clear that Ramos’ role Monday will have an impact on his goals of improving quality of life issues and police-community relations. But having his own connect to a United States senator’s office certainly cannot hurt.

By day, Ramos serves as West Springfield Senator James Welch’s district director. It was in that role he said he had spoken before a bigger crowd once. He presented a proclamation to Paula White, a minister, during an appearance at the MassMutual Center. Until Monday he said he never had such a prominent role in a program involving a major statewide figure like a senator or governor.

To have it be Warren was an honor. “We are fortunate to have somebody like Senator Warren representing us,” he said. “She’s not intimidated by any means.”

“She represents what we represent,” Ramos continued, apparently referencing the diverse interests of Springfield and Massachusetts more broadly. “There’s a reason people really love her.”