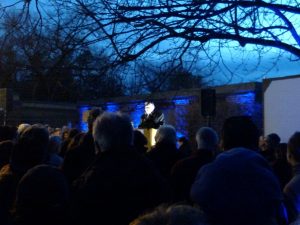 SPRINGFIELD—Responding to a wave of threats and vandalism targeting Jewish institutions and facilities that had lapped into the Pioneer Valley, an interfaith crowd of hundreds representing multiple faiths rallied in solidarity with the local Jewish community and against hatred and bigotry of all kinds.

Dozens of anti-Semitic incidents have been documented since Donald Trump’s election. A bomb threat last week at the Jewish Community Center here forced an evacuation. But Thursday night, Christian ministers, rabbis, imams, elected officials and laity stood outside the JCC’s main entrance to reject fear and a reaffirm the strength of a broader community.

“They want to prevent us from coming here,” said Dan Levinson, an associate regional director of the New England Anti-Defamation League.

It was not the only such show of support for religious groups facing harassment since Trump’s inauguration. Last month people rallied in support of the Muslim community near the Islamic Society of Western Massachusetts in West Springfield.

Among incidents nationwide were the desecration of Jewish cemeteries, harassment of immigrant communities and violence aimed Muslims and members of the transgender community.

Speaking as Rabbi Raquel Kosovske invoked the story of Queen Esther and Mordechai, associated with Purim which is this weekend.

“We remember the strength and all of the support it took” Kosovske said to thwart a genocide premised on slander against the Jews. “Today, there is no Queen Esther or Mordechai to save us,” but rather it falls to the community to call out the bigotry targeting of any community.

“Who knows that we did not come into the world for this,” she continued.

Over 150 people gather @SpringfieldJCC to stand up against hate following 2 threats in the last month pic.twitter.com/vMK3E5A9jH

The bomb threat last week appeared in the men’s locker room at the JCC, a sprawling campus of recreational, daycare and educational facilities straddling the Longmeadow line. Though Springfield Police and Fire found no suspicious packages, the threat obviously set the community on edge.

Mayor Sarno, who spoke at the event, said the perpetrators would be caught.

“The message must be sent that this hate cannot be tolerated whether it is the Jewish community, the Muslim community or the Christian community,” Sarno said. He added that rhetoric from the federal level down must go down a notch.

Martin Pion, President of the Interfaith Council declared, “Our message very consistently is that people should be able to practice their religious traditions without harassment, without a sense of fear.” He also noted the murder of several transgender individuals since 2017 began.

Dr. Mohammad Bajwa, representing the Islamic Society of Western Massachusetts, said the recent rash of threats seem the work of ignorance. But, he added, “most of this seems to be intentional and bland.”

He mentioned was the shooting of a Sikh man—ostensibly mistaken for a Muslim—in Seattle. The perpetrated allegedly yelled “go back to his own country.”

“The Islamic Society would stand shoulder to shoulder with our Jewish brothers and sisters” and anybody threatened as they had done for those of his faith community, Bajwa said. “I must thank you very much for that,” he added.

Situated between Longmeadow and Springfield’s Forest Park neighborhood, which hosts synagogues for all three Jewish mainline traditions, the JCC does serve a large Jewish population. But its gym, pool, daycare center and classes have long been accessible to the wider, diverse population of Greater Springfield.

Because it serves a varied, interfaith community already, there was an urgency to reject fear stemming from the bomb threat. Multiple speakers refused to let threats like the one made last week sow division and undermine the JCC’s mission.

Senator Lesser spoke to this directly. Lesser, who is Jewish, described the role the JCC played in his life. There he learned “to fight for justice and to repair the world,” referencing the Jewish precept of Tikkun olam.

Proud of our Western Mass family who came together to support the Springfield JCC after last week's bomb threat. We will stand strong against hate and intolerance in all it's forms.

“Jewish Community Centers were started because we needed a safe space,” after fleeing persecution. But, he continued, they turned around and invited everybody in to use and enjoy them.