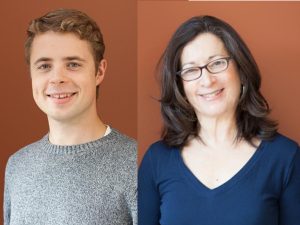 New England Public Radio, the National Public Radio affiliate licensed to the University of Massachusetts-Amherst, has long been a fixture in Pioneer Valley Media. However, it has sought a more prominent place in the local news business in recent years. NEPR relocated its headquarters to downtown Springfield from the UMass campus. It expanded reporting in the Berkshires and began a weekly show on local affairs.

But two prominent journalists during this period have announced their moving on. Henry Epp and Susan Kaplan, NEPR’s hosts for NPR’s flagship broadcasts Morning Edition and All Things Considered, have taken jobs at other public radio networks.

While a charter member of NPR, WFCR—now branded as NEPR—has historically had a tighter relationship with Hampshire County. Its move to Springfield in 2014 represented a deliberate effort to break out of that shell. From there it could reassert itself as the dominant public radio network for Western Massachusetts and beyond.

Epp’s career coincided with this transition, rising from reporter to Morning Edition anchor. Kaplan, who joined WFCR in 1995 and has hosted All Things Considered for the past seven years, began NEPR’s week in review program in 2015. Now both are moving on. Epp will become Vermont Public Radio’s All Things Considered host while Kaplan has taken a job as a news editor for WGBH’s Boston Public Radio.

The Reminder’s Mike Dobbs first reported Kaplan’s departure in his weekly column. The Republican originally reported Epp’s move in an article about both reporters’ new jobs.

While it had a small studio in WGBY’s building, locating to the Fuller Block in Springfield put the station and—more importantly for political implications—its news staff in downtown. The move was ostensibly part of UMass’s broader efforts to place a foothold in Springfield. Yet, NEPR could also more forcefully compete for Hampden County news.

At the same time, NEPR aggressively expanded its reach. NEPR purchased WAIC from Connecticut Public Radio to carry WNNZ, an AM station featuring all news, on the FM spectrum. (WFCR carries NPR’s flagship broadcasts, but carries classical music and jazz at other times). Meanwhile, a donor helped finance a full-time Berkshire County reporter.

Within a year of opening its new studios, Kaplan began hosting what is now The Short List. During the roughly eight-minute program Kaplan discussed local and state news with guests from Pioneer Valley media outlets large and small. WMassP&I’s editor-in-chief Matt Szafranski is often a contributor to the program.

In 2015, the same year that The Short List began, NEPR staked a big claim on the local elections. Epp, as Morning Edition anchor, interviewed leading candidates for mayor in Holyoke and Springfield. Even Domenic Sarno, who campaigned minimally and participated in no debates, came into the studio to chat. Epp’s interviews were in-depth and at times pushed his subjects off-message.

Epp and Kaplan had an impact as correspondents as well. In an interview with The Republican, both discussed subjects that have interested them over time. Kaplan noted work she had done on sexual assault and returning Afghanistan and Iraq veterans. Epp highlighted the continuing drama around casinos and MGM specifically.

Not surprisingly, both reporters’ work made them attractive candidates for their new public radio homes.

“We’re delighted to have Henry join our news team as a reporter and our All Things Considered host,” John Dillon, Vermont Public Radio’s News Director told WMassP&I in an email. Highlighting Epp’s NEPR work, Dillon continued, “We were extremely impressed by his reporting, interviewing skills and on-air presence.”

WGBH was also enthusiastic. “We’re thrilled to welcome Susan to our expanding newsroom,” news director Kate Zachry said in a statement. “The experience and hard-earned reporting chops that she brings to our team are invaluable to the substantive local news we deliver everyday,” Zachry continued.

Kaplan told The Republican she will be helping reporters edit stories and craft projects. She will still report herself, too.

“I find that storytelling and communicating through audio is the closest that I can come to bridging the gap between two people,” she told the paper. Kaplan added, “I think it’s intimate, it allows people to think and use their imagination. I love it.”

We're going to miss these two. A big farewell today to hosts Susan Kaplan and Henry Epp. May their futures be bright at WGBH and VPR! #publicradio #NEPR #morningedition #allthingsconsidered

Epp, whose college internship with NEPR in 2011 morphed into a full-time gig, noted public radio’s reach in the Green Mountain State.

“They have a little over 200,000 listeners, so about a third of the state is listening to Vermont Public Radio,” he told The Republican. “It has a big influence on state government, state policy and what people are talking about and paying attention to.”

The Republican reported Carrie Healy, NEPR’s Weekend Edition anchor, will fill in on Morning Edition. Kari Njiiri, a reporter and host of NEPR’s Jazz Safari, shall host All Things Considered—as he had once before—for now. In his column, Dobbs wrote The Short List shall continue as well.