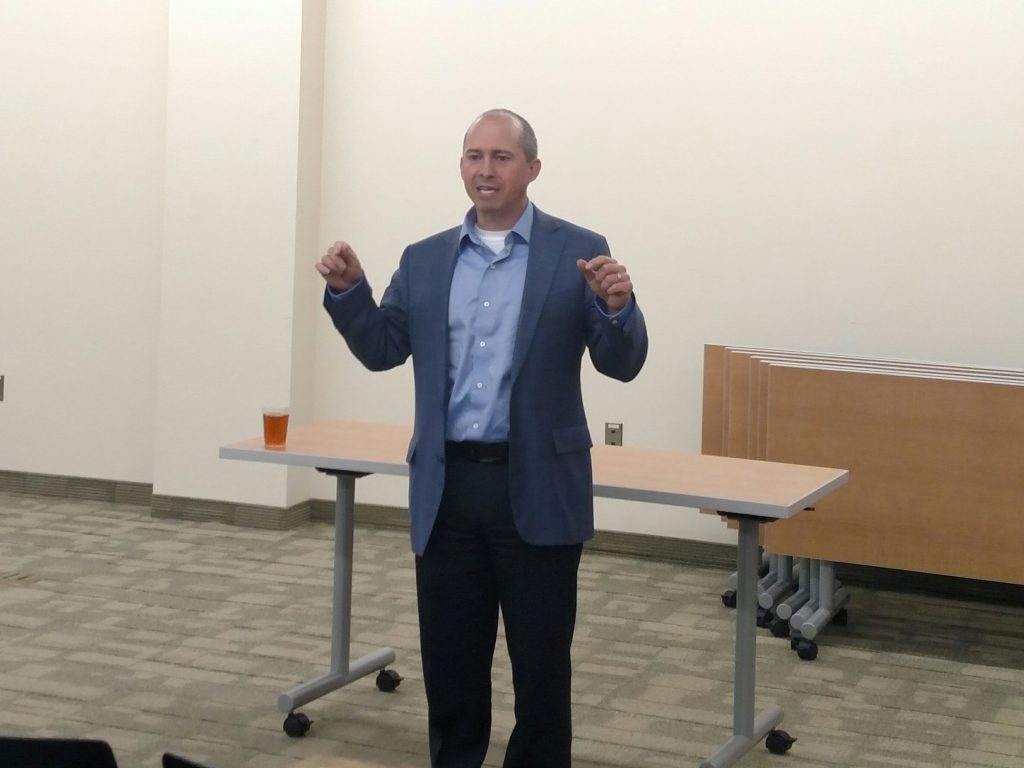 WEST SPRINGFIELD—Although the campaign war chest of Governor Charlie Baker bursts with cash, the Republican is not the first major party candidate to declare his candidate for 2018. That title goes to Jay Gonzalez, a former Deval Patrick cabinet secretary who launched his campaign in January. While he faces a long path to unseating sky-high polling Baker, Gonzalez has eagerly embraced the role as foil to the governor.

“We’ve always been striving to move forward and make progress,” Gonzalez said. “Not only are we not making progress. We’re not even trying,” he said of Massachusetts under Baker. 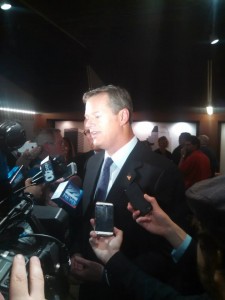 Gonzalez and Baker are former secretaries of Administration and Finance (A&F) who worked for transformative figures in Massachusetts politics, Patrick and Bill Weld respectively. Both had careers in healthcare thereafter.

This background fits Massachusetts’s skepticism of long-serving politicians in the corner office. Democratic party figures, attorneys general and a state treasurer fell to Republican after Republican for this reason. Patrick became the first Democratic governor since Michael Dukakis in part by being such an outsider. But Gonzalez’s primary opponents have non-Beacon Hill credentials, too.

Gonzalez’s resume—if not his height, he jokes—may mirror Baker’s. Yet, Gonzalez also challenges the governor’s 2014 promise, however unfulfilled, to be a steady hand at the wheel. Though necessary, it is “not sufficient” to meet the commonwealth’s needs.

No Siesta Till Boston

In an interview at Crepe’s Tea House in Westside late last month, Gonzalez discussed his decision to run, the commonwealth’s budget situation and, of course, Baker.

Gonzalez came to Massachusetts by way of Ohio. His mother and father met while she was studying abroad in Spain. They returned together. She was pregnant with Gonzalez and his father, then-19, spoke no English.

The story takes a quintessentially American turn. His father owning his own business and his mother ultimately returned to college, becoming a teacher. After attending Dartmouth and Georgetown Law, Gonzalez found his way to the Boston area, working as a municipal finance attorney. Active in politics, he jumped on Patrick’s bandwagon and later joined his administration. 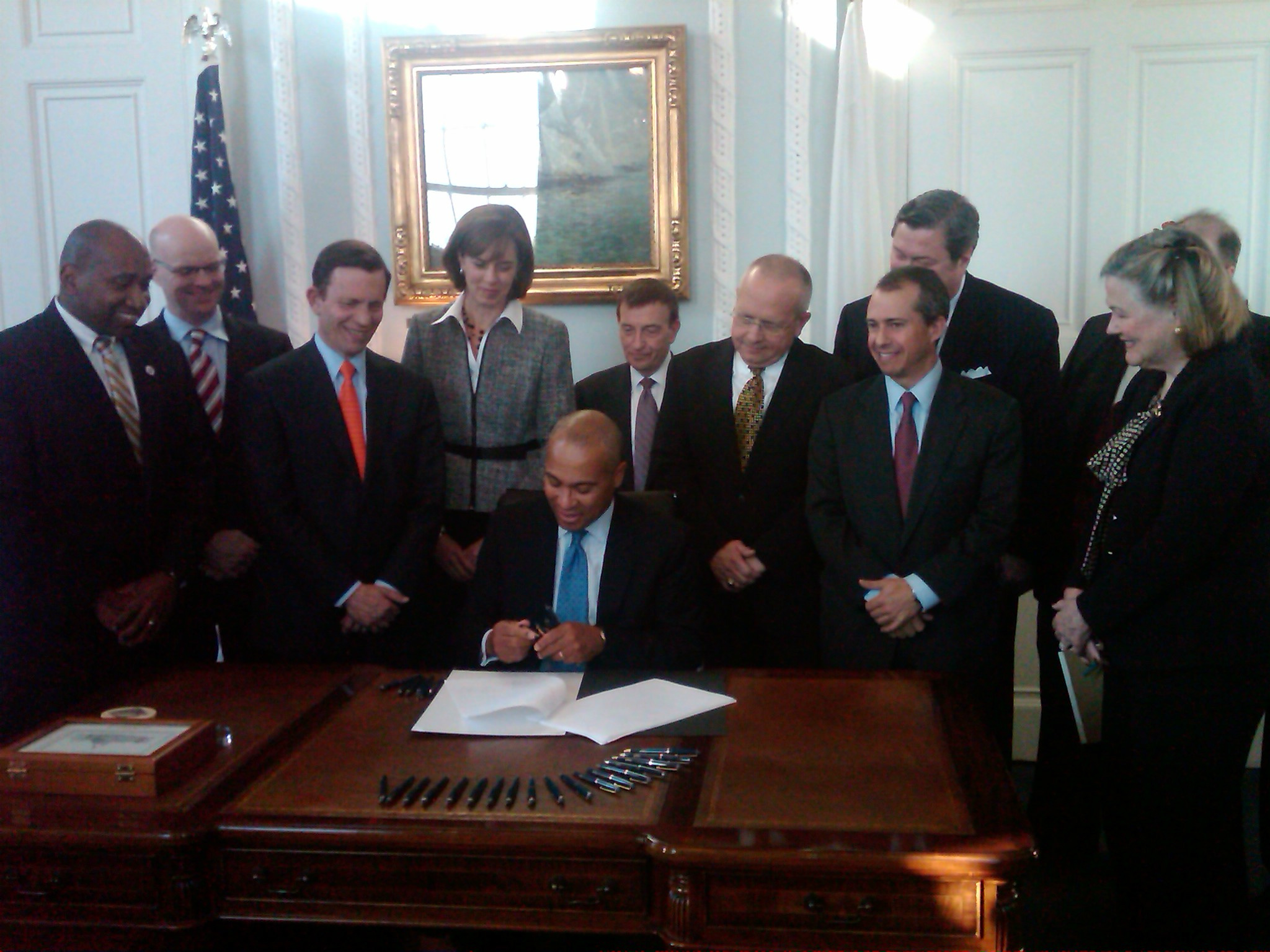 Then-Sec. Gonzalez, third from right with burgundy tie, with Gov. Deval Patrick in 2011 (via Twitter/@massanf)

After six years—nearly four as A&F Secretary and two as an undersecretary—the Needham Democrat left to later become CelticCare Health’s CEO. He left that job to run for governor. Gonzalez lives with his wife Cyndi, a political communications consultant, and his two daughters.

“It is an absolute privilege to have been able to do this,” he replied when asked about pursuing the slog of electoral politics.

As to why he’s running, Gonzalez argues Baker’s tepid governorship has cost the commonwealth needed infrastructure, educational programs and opportunities for residents.

“I am running on an ambitious agenda to move us forward including making investments in a lot of areas that are going to make a difference in people’s lives,” he said.

To pay for it, Gonzalez backs the Millionaires’ Tax likely to be on the ballot next year. Estimates suggest it could add up to $2 billion to the state’s coffers.

Riffing on childcare, he spoke in detail about its high cost in Massachusetts—$30,000 for two kids—becoming a lodestone around the neck of many families. He said federal Head Start allowed his wife’s mother work while she and her sister went to preschool. 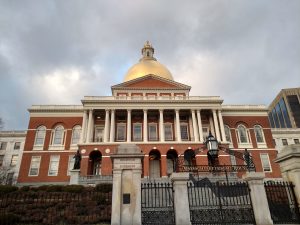 Gonzalez said Gov. Patrick encourage his staff to get out of “the building” and into the commonwealth. (WMassP&I)

On the 413’s needs, Gonzalez said Patrick instructed his cabinet to hold meetings out here and to interact with area residents. Gonzalez learned about the region’s needs and its suspicions of Boston. He championed expanding broadband Internet access, an ever-unfinished goal in the commonwealth’s hinterlands.

“Many people in Western Mass feel Boston doesn’t care about them, isn’t interested in their issues,” he said. He observed the commonwealth’s occident has “gotten shafted for decades when it comes to transportation.”

“I’ll be your governor as much as anybody else’s,” Gonzalez assured.

“It could be a gamechanger,” he said. Though he declined to commit to it without knowing if he could deliver on it. Gonzalez said he would be meeting that night with local rail supporters.

Baker stopped the East-West rail study in its tracks (via wikipedia).

“We need leadership right here in Massachusetts,” he told Westside Democrats, his voice rising to slightly Patrick-esque occasionally.  “There are consequences to his lack of leadership.”

Gonzalez admitted that Baker had not sold himself as a grand visionary. Rather, Baker promised to be a manager. But the recurrent budget crises seemingly upended that claim. With a growing economy—which has cooled this year—Gonzalez said this was unacceptable, noting he managed the budget during the recession.

Speaking to WMassP&I, he concurred with US Senator Elizabeth Warren’s critique of Baker not forcefully opposing national Republicans’ healthcare repeal enough. Indeed, Gonzalez sees a pattern. He pointed to Baker’s timidity on Syrian refugees, transgender rights—he signed the bill, but out of public view—and even the confederate flag.

“It is really important that people in Massachusetts know that their governor is there for them,” Gonzalez aid. “On the policy and symbolically.”

A touch of lofty rhetoric and an aspirational pitch evoke Patrick’s tenure. But Gonzalez will have to contend with good and bad from his former boss’s tenure—or at least the part during which he served. Gonzalez observed he was not Patrick, although proud of his accomplishments in Patrick’s administration.

Some in labor have grumbled about Gonzalez’s role in collective bargaining changes for municipal workers’ healthcare. Not backing off the issue, he observed labor backed the final bill.

“During a really hard time,” he said of working with labor generally, “I think if you ask the head of the state employee unions, they would say I was fair.” Gonzalez added, “I think we need unions now more than ever.”

But Patrick’s legacy may not be the immediate hurdle. Baker and his heady, if possibly fragile polling numbers are.

Gonzalez told WBUR, a Boston public radio station, Election Day 2018 is a long way away. There is time to challenge Baker’s tenure on the merits and cut into his support, he assured.

The national political mood looms large, too. While Massachusetts voters do distinguish between federal and state officials, electoral tides have swept out popular pols before. How a rising left flexes its muscles could sink or sustain any of the Democratic gubernatorial candidacies.

Gonzalez, who has held office as a town meeting member, is still at the introductory phase, however.

While speaking to West Springfield Democrats, he recalled driving a United States Senator around Ohio, John Glenn, for what would be his last reelection bid. It was a mind-blower for the then-21 year-old Gonzalez “that this guy in Friendship 7 orbiting the earth was sitting in my Ford Tempo.”

The anecdote was apt. After all, Gonzalez must himself reach beyond Baker’s stratospheric approval ratings to secure a more earthly seat in the State House.