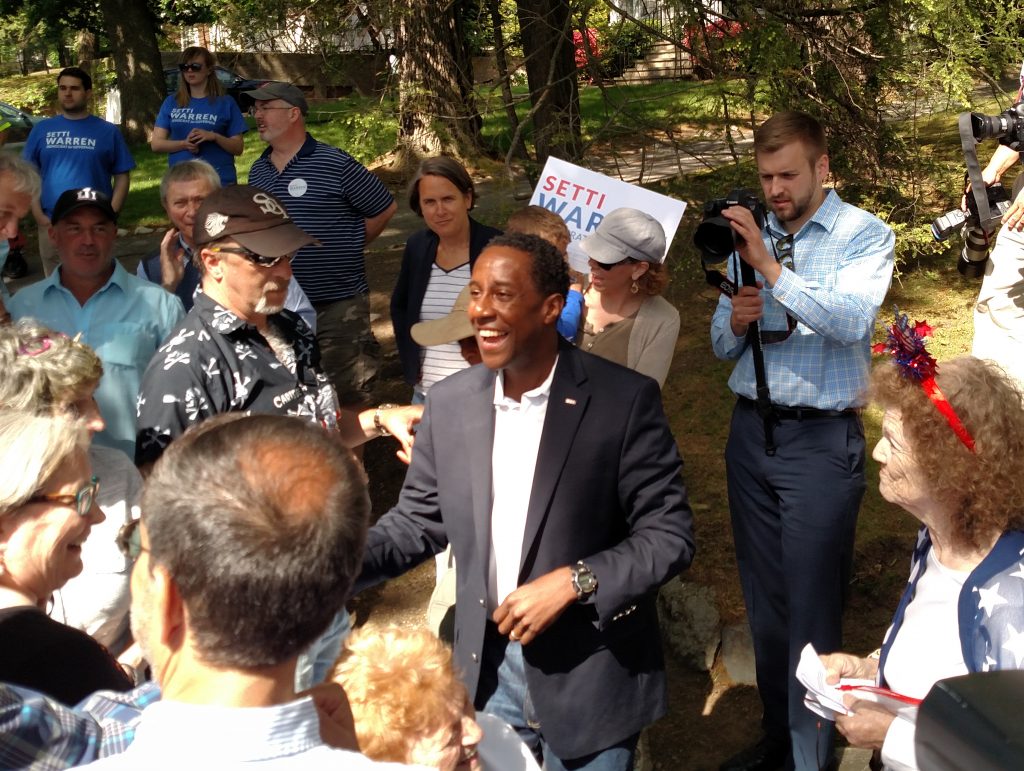 Mayor Setti Warren of Newton at his block party kickoff May 20. (WMassP&I)

NEWTON—Along a hilly street, one of many here, a crowd of all ages scarfed down ice cream and waited. It was a warm spring day, but a canopy of tree shaded much of the block party below. Perched on the undulating landscape was a podium framed by an American flag and a roomy home. From here, in his neighborhood, not a banquet hall or the steps of a civic building, Newton Mayor Setti Warren would formally declare his candidacy for governor.

Like his other fellow Democrats, Warren faces a daunting challenge in taking down the commonwealth’s ever-smiling Republican Governor, Charlie Baker. Yet, he is not concentrating his fire on Baker specifically. Rather, Warren underscores his distance from Beacon Hill, while touting his city and mayoralty as proof he can address the commonwealth’s manifold needs.

“Today, we start a long and challenging journey. It will not be easy, but working together, we can move Massachusetts forward to tackle economic inequality once and for all,” Warren said on May 20, as he formally declared his candidacy.

Most expected the two-term mayor of this built-up, but affluent Boston suburb to run since he said he would not seek reelection. Warren’s announcement comes shortly after former lieutenant governor candidate Bob Massie’s and several months after former finance secretary Jay Gonzalez’s declaration.

A theme is developing within the Democratic field of candidates from outside the swirl of State House politics. In Warren’s case, that puts a spotlight on this city of 13 villages.

Been There. Fixed That.

A week before his kickoff at a diner overlooking the Turnpike’s jaunt through Newton, Warren discussed his candidacy and mayoralty. He said he held off on declaring to hear from Massachusetts resident, but also to finish work up on the city budget. The delay notwithstanding, former Governor Michael Dukakis (whom Warren’s father, Joseph, advised) and former Treasurer Steve Grossman have signed onto Warren’s bid.

Warren grew up in Newton. His parents were active in the Civil Rights movement and bought a home here—the one Warren now lives in with his family—through the G.I. Bill. His parents were not wealthy, but the affluent environment provided Warren with many opportunities.

He went on to Boston College and Suffolk University Law and served in the Clinton administration. Warren worked on John Kerry’s presidential campaign where he met his wife Tassy. They have two children.

Among the issues facing Warren when he was elected were massive overruns on the new Newton North High School, pictured above under construction in 2009. (via wikipedia)

After a stint in the naval reserves including a deployment in Iraq, he came home to a city in crisis. He decided to run, despite a lack of electoral experience “to make sure Newton was on the right path.”

“When I was running for mayor for 2009, Newton had a $40 million structural deficit. Two of the worst conditions elementary schools in the state. Overcrowded classroom. No rainy day funds.”

The turnaround did not come easily he explained. It required “Being direct and honest about the decisions we make.”

There were 70 town meetings, sober reviews of expenditures and labor negotiations. Yet voters approved several Proposition 2 ½ voter overrides for schools and fire services despite a history of their failure here.

“We weren’t afraid to ask people for more revenue,” he said. One referendum package came only months before Warren romped to reelection in 2013.

Given the state’s budget malaise, the tale Warren tells about Newton invites comparisons to Massachusetts at-large and that’s the point.

Though Warren called economic inequality the challenge of our day, he has made a more fundamental call to level with Bay Staters. Both Baker and Beacon Hill Democrats deserve blame for a rolling problem of budget deficits, he argues. Neither are reckoning with the state’s budget issues by raising taxes or passing unpopular cuts. Meanwhile, infrastructure and education languish.

Though he has slapped back at the governor from time to time, Warren avoided the governor’s name in his announcement speech. The campaign prefers to a contrast with the governor, who has largely settled into Beacon Hill’s traditional groove, by implication.

“This is not about Charlie Baker,” Warren said. “This is two decades about how Beacon Hill is not addressing the needs of people across the state.”

Still, one Baker allusion was unmistakable. “But just getting to next year is not enough,” Warren told the block party. It was a dig at the raison d’etre of Baker’s candidacy: to be a manager. But Baker’s blindered focus on the day-to-day, year-to-year has made what vision or plan he has difficult to divine.

Of course, Warren is not looking to merely balance the budget. He has an ambitious agenda of free college tuition, infrastructure and a path to single-payer healthcare to counter “a growing divide” in the state.

In this city of beautiful homes tucked into rolling hills, charming neighborhood centers, and shopping plazas of every post-war decade’s style, it may be hard for Warren to scale out to the whole state.

But looks, deceive, Warren says. While Newton has several millionaires, 1/8 of its schoolchildren live in poverty he says. Income inequality lives here, too. (Though, Warren claims, the achievement gap has narrowed). Newton’s wealth and prosperity did not inoculate it from such troubles, just as Massachusetts’s growth has not held off budget crises or stark economic disparities.

Supporters point to potential models for the commonwealth such as Newton’s solar share program. The city erected solar panel canopies on the public works department’s yard. The energy generated was used to defray the energy bills of eligible Newtonians.

An energetic approach to environmental issues has earned support from the 413, namely Amherst Rep Solomon Goldstein-Rose, a dogged climate hawk.

The construction of the Turnpike demolished charming stations in Newton along the very route that goes to Springfield. Service along the route through Newton remains poor, clogging traffic through the city. (via wikipedia)

Warren, who briefly ran for US Senate in 2011, sees the schism on a regional level, too. Areas like Western Massachusetts have gotten the shaft on transportation funding and other resources. He signaled support for effective rail service between Springfield and Boston.

“Senator Lesser really presented a vision of transportation through high-speed rail,” Warren said referencing Longmeadow state senator Eric Lesser. He alluded to a “bullet-train” between the commonwealth’s first and third cities in his announcement.

Lesser has pushed for a technical study to implement such service. The Senate included it in its budget this year after Baker vetoed it out of last year’s spending plan. “It is unfortunate the governor vetoed that study,” Warren added.

In sculpting an optimistic message that exposes an inadequacy in Baker’s governance indirectly, Warren seems to be trying pick up lessons from 2016. In the interview, he described his utter disappointment at Hillary Clinton’s loss and maintains a commitment to oppose Donald Trump’s most destructive policies.

However, harkening back to the comradery he found in the armed services, Warren said common ground with Trump voters must be found. It exists not only in Iraq, but in Newton, too. Warren said he got some Republicans behind a sanctuary city initiative by underscoring how it could build trust between police and immigrant communities. 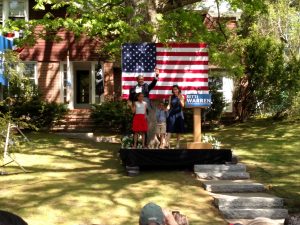 Mayor Warren with his family on May 20. (WMassP&I)

That focus on common goals, he argues, is especially important now and was front and center in his announcement remarks.

“What kind of Commonwealth do we want to be? Will we keep our promises to previous generations?  Will we live up to our obligations to the generations to come?” he said.

They were not just wonky or bureaucratic questions, however. “These are moral questions,” Warren said. “These are questions that get to the core of who we are as a Commonwealth, as Americans, as thoughtful and caring citizens.”

Should that message jolt voters out of complacency, Baker may have trouble.

One thought on “Executive Privilege: Warren’s Pitch to Voters Highlights His City of 13 Villages…”