Take My Council, Please: Are You As Cold As ICE?…

SPRINGFIELD—Donald Trump’s policies, like his “Mexico-financed” wall, face push back everywhere. It is no different here. However, an effort to urge Springfield’s Finest to stay out of immigration enforcement ran aground procedural complaints and clerical minutiae.

The result was a flip from the prior regular meeting where the food truck ordinance screeched to halt. Monday night that ordinance easily passed first step. However, a non-binding resolution calling for the Police Department to limit if not eliminate inquiries into immigration status fell apart. Its lead sponsor, Ward 1 Councilor Adam Gomez, sent it to committee.

The resolution, timed to coincide with May Day, or International Workers Day, may have been cursed from the beginning. A late edition to the agenda last week, the original version was missing much of the resolution’s text. Thus Gomez and supporters needed to amend it on the floor. While the new language was always meant to be there, many councilors were skittish about voting on it with such short notice.

A crowd of activists who had finished a May Day march crowded the Council chamber. Early outbursts almost led councilors to briefly clear the gallery. Later on Council President Orlando Ramos reminded the crowd to be respectful.

Much of the rest of the meeting passed without incident. The revenue and expenditure report raised no red flags. The Council accepted Finance, Maintenance & Development and Public Safety committee reporters. It approved utility provisions and forwarded a zone change to the Planning Board.

The Council sent a Pioneer Valley Transit Authority request to build ADA-compliant landing pads to committee. The public transit operator has plans to consolidate bus stops across the city. Councilors made clear they intended to use the landing pads to resist that proposal.

Elder Affairs and Fire grants received acceptance. Councilors approved about $806,000 in transfers to pay for snow removal across city departments. The funds came from free cash and other extra funds. The Council also authorized a $450,000 transfer for police vehicles. Another $40,500 was transferred within the Treasurer’s office from its professional services account to pay for advertising and legal fees.

A labor contract between the city and the American Federation of State, County and Municipal Employees, Local 3065 and the Parks department had its moment, too. Ward 7 Councilor Timothy Allen drew attention to a provision seemingly creating a job for an AFSCME official who works for the city.

Councilor Tim Allen at a previous meeting. He raised concerns about a labor pact. (WMassP&I)

Allen said a grievance had been filed only two days before the bargaining unit and said the special jobs in the contract were “unusual.”

Councilors seemed uneasy about wading into a grievance, which seemed to supersede the body’s usual willingness to question labor pacts. Though Allen avoided naming the employee involved, at-large Councilor Kateri Walsh asked whether the Council could even discuss the issue. City Solicitor Ed Pikula told councilors they could, given the unique circumstance of the contract. He warned litigating the grievance itself was inappropriate.

Ultimately, the contract passed 11-1 with only Allen in dissent.

At the meeting’s very end, the Council went into executive session to discuss pending litigation.

After failing to advance on April 10, the food truck ordinance took a big leap forward Monday night. Gomez, who as Ward 1 councilor represents downtown, had objected to issue downtown permits on a first-come, first-served basis. However, a compromise came together in committee.

Monday’s food truck ordinance movement had been shepherding the item on the Council. (via Facebook/Williams campaign)

The number of downtown slots were upped to eight in both the Lyman and Kaynor street area and by Riverfront Park. Originally, the ordinance called for six in each area. There is no numerical limit on food truck permits outside downtown. Gomez said if there is “an enormous volume of applicants, then we can look into a lottery situation.”

Christopher Cignoli, whose Department of Public Works will enforce the ordinance, asked the Council to alter the fee schedule to reflect other DPW fees. Councilors agreed, voting to lower the application fee to $75 from $200 and raising the quarterly fee to $150 from $75.

These amendments and a third, a clerical change to add Kaynor Street, passed on voice votes.

Cignoli had asked for the Council to harmonize the fines with the DPW’s existing ones, too. “We want them steep enough so people will comply with rules and regulations.”

But no amendment to that effect was offered. The Council passed first step on the ordinance.

That left only the pro-immigration resolve. An earlier attempt to handle the matter out of order faced an objection, leaving the item to the end. The crowd had dwindled a bit, but remained robust enough to fill the role of Greek chorus, murmuring its discontent and snapping fingers with approval. 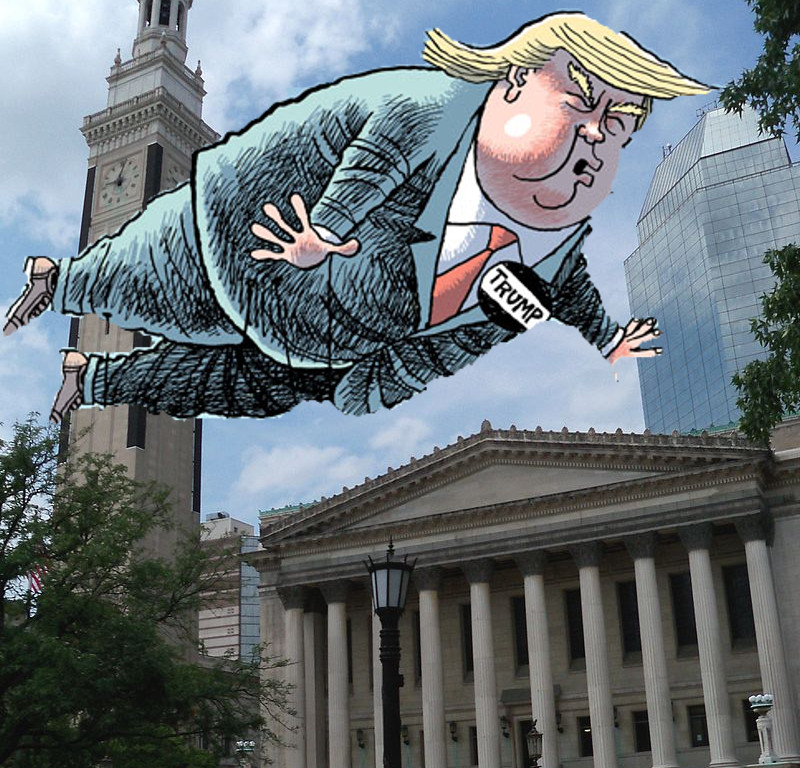 The resolve was not fated for passage, but it is not clear that substance was the culprit.

Gomez, the lead sponsor, moved quickly to amend the resolve. When Monday’s agenda originally came out April 26, the May Day ordinance was not on it. A revised agenda the following day had the resolve, but much of its text was missing, including the actual call to keep the Springfield Police out of immigration. The Open Meeting Law likely prohibited fixes before Monday night.

Not surprisingly, the City Council, a procedurally-minded institution, rebuffed Gomez’s attempt to amend the resolution on the floor.

The resolve was not a slap at Pearl Street. Nor did it force Springfield into the amorphous definitions for a sanctuary city. Rather, Gomez emphasized public safety. Since Trump’s immigration crackdown, fears that undocumented immigrants might avoid courts and local law enforcement have spiked—and with good reason.

Gomez’s substitute language urged cops to not inquire into immigration status—unless pertinent to an investigation—or hold individuals on immigration matters without a federal warrant. It also opposed contracting with Immigrations and Customs Enforcement (ICE) to enforce immigration law. The language also disclaimed any suggestion police should not investigate actual crime—immigration violations are civil matters—or participate in federal task forces. 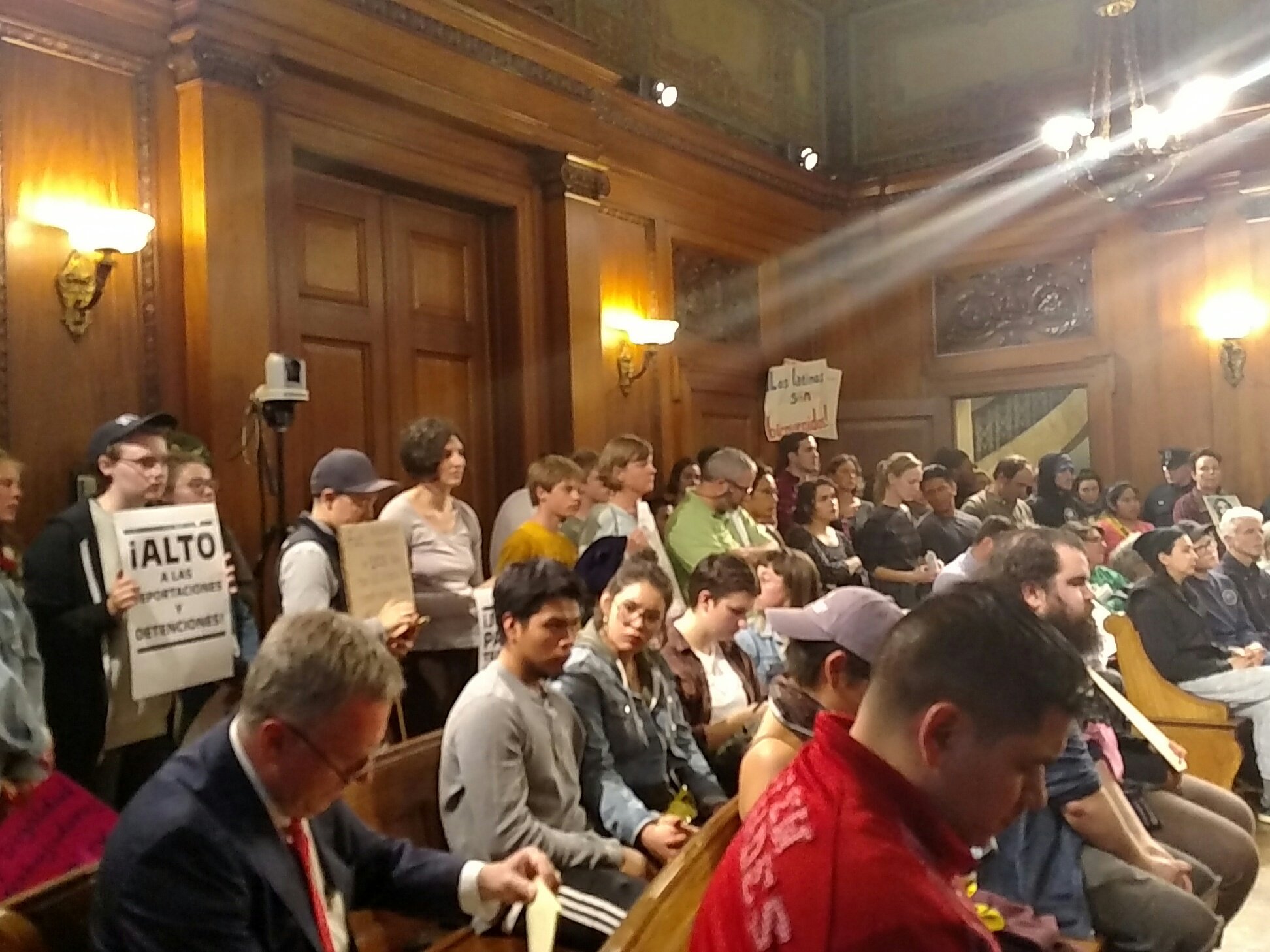 As activists quietly urged the crowd to stay calm, a clearly disappointed Gomez excoriated his colleagues’ opposition. He noted the safety issues, and the city’s changing demographics but also the turmoil Trump’s policies brought.

Marcus Williams, the Ward 5 councilor noted the resolve’s lack of legal force. He also highlighted the impact on those fleeing domestic abuse.

Allen explained councilors only saw the replacement language that night.

“But we have a process for having opinions given to us by the solicitor,” he said, noting Pikula, the city solicitor was not prepared to opine on recent case law freezing Trump’s anti-sanctuary city efforts. He said the Council had an obligation to consider the broader implications—should Pearl Street adhere to the resolve—but underscored this was not a judgment on the issue.

Other councilors agreed. “Let’s not do it the way we did it tonight,” Ashe said referring to the notice.

Ramos, the Council President and a cosponsor of the measure, stepped down to speak on the public safety dimension. “We just don’t have the manpower, we don’t have the resources to allow our law enforcement officers to be doing the job of immigration officers,” he said.

Rather than put the incomplete resolve up for certain defeat, Gomez motioned to send it to committee. “I honestly just want to say to whoever felt blindsided, I apologize,” he said.

But he struck a defiant tone, too, pointing again to May Day, which commemorates events at Chicago’s Haymarket Square in 1886. A peaceful rally for an eight-hour was broken up by police and devolved into a riot. Seven cops and four civilians died.

The United States is, Gomez observed, “the only country that doesn’t stand in solidarity of their citizens who died that day.”

Still, the pushing the resolve for May Day may have been its undoing in part. On balance, the votes for the measure are probably there. But a combination of rushing to coordinate the resolve with the May 1 meeting and the mechanics of Open Meeting law left far too much room for the Council’s institutional—not political—conservativism to take hold.

The resolve may yet pass, but not on International Workers Day.