SPRINGFIELD—Its agenda was long and several items dragged, but the City Council’s mid-summer regular meeting largely featured uncontroversial items and housekeeping. Potentially big matters like an MGM request for more time to build its housing units prompted questions, but won acquiescence. Typically hum-drum matters hit a few snags while others were amended on the floor.

At-large Councilor Kateri Walsh, who chairs Maintenance & Development, reported on several items. She noted concerns about an ordinance raising the bulk curbside pickup fee to $10 from $8. The increase was part of broader change to harmonize ordinance and department practices. City officials said the hike came about due to higher costs as part of the contract with the vendor.

The ordinance passed first step, but councilors removed the increase.

Another item that got bogged down was a quitclaim deed under the city’s abutting lot program. Such transactions, wherein the city sells excess lots to adjacent landowners, involve lots too small for development. Otherwise, they would go out to bid or auction.

Robert Demusis from the Office of Housing explained that path was impractical for 62 Bowdoin Street. The McKnight Historic District’s rules would require a large house like others already there. Demusis said the cost would be prohibitive, perhaps $400,000. 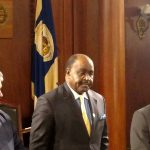 At-large councilor Bud Williams disagreed. “I think we should do a better job of having that lot built upon or something,” Williams said.

Elsewhere the Council advanced petitions for utility work on Island Pond Road and accepted grants for the dispatch, emergency management, health, library and police departments. One was a donation for the police department’s K9 unit.

The Council authorized the Fire Department to seek a six-year lease for a new firetruck at the Mason Square fire station. It also authorized a $47,000 transfer within the animal control department.

The MGM’s amendment to the host community agreement (HCA), it was one of many casino matters. Earlier councilors tabled an item on MGM Way, because Public Works director Chris Cignoli was absent Monday. Two others were permits for petroleum storage and an open-air parking lot. Both passed.

However, the amendment to the HCA sparked a broader debate. MGM wanted to push out its deadline to open market-rate housing units promised in the HCA now planned for outside the casino’s footprint. The former School Department building was a potential site, which, with MGM’s help, the city repossessed after the prior developer’s plans fell apart.

Now, MGM may assist Opal—a Peter Picknelly company—to redevelop the Court Square Hotel as apartments. Yet under the HCA, the unit were to open next month. That is all but impossible.

Court Square Building, the yellow building at right. (via Wikipedia)

MGM had been somewhat quiet about its apartment plans. The gaming company did not respond to an inquiry last week as to whether any units would be on-site. Increased focus on the Court Square Hotel left the ex-School Department building at 195 State Street in doubt. At-large Council candidate Jesse Lederman highlighted this concern in a press release.

To their credit, the company, through its attorneys Seth Stratton and Frank Fitzgerald, and city solicitor Ed Pikula had some answers.

Pikula emphasized the amendment merely reset the clock. “MGM remains obligated to meet all of the other conditions in the HCA” including building the apartments, Pikula said.

Among the three attorneys, it was clear that MGM wants the time to finish discussions with Opal. The new goal is to complete some apartments in 2018 and the rest in 2019.

Though the answers satisfied councilors, non-sequiturs dragged out the debate. One that was tangentially related concerned rumors the Court Square development could require the demolition of 1208 Main Street. It would be replaced with a parking lot.

The building in the foreground is 1208 Main Street. It is at the corner of State & Main.

“I’ll be lobbying against you putting a parking on Main Street,” Councilor Twiggs said. Fitzgerald chimed in to note such decisions would be Opal’s and not MGM’s.

As debate meandered toward a vote, Pikula also revealed 195 State’s possible fate. The ex-School Department building could host MGM apartments whether an Opal-MGM pact materializes or not. Pikula said it could also attract other offers given remediation work the last developer had performed before Springfield took the property back.

The rest of the agenda was legislative. The Council held off on further action on an air pollution ordinance to allow the Public Health Commission to hold a meeting on the subject.

The Council granted first step to set up a revolving funds ordinance. Chief Administrative and Financial Officer Timothy Plante explained that a 2016 state law requires ordinances for such funds. A revolving fund is a pot of money used by the city for a specific purpose—library donations or the trash fee are examples. The final two enacting votes will come at the next meeting.

A hike in petroleum storage fees, unchanged since the 1990’s, received final, unanimous approval. The indifference to this hike compared to residential bulk pickup fees did not go unnoticed.

The formal agenda concluded with a vote to advance the Apremont Triangle historic district. Adjacent to the Quadrangle/Mattoon district and the one-building Willys-Overland historic area, the new district covers several older buildings near the intersection of Bridge, Chestnut, Hillman and Pearl streets. It includes the Kimball Hotel and former YMCA, now both apartments.

Historical Commission Vice-Chair Benjamin Murphy answers councilors’ questions. He said there had been opposition the Willys-Overland’s designation because it failed to capture many of the buildings in the Apremont Triangle district. Now the local neighborhood association, the Armoury-Quadrangle Civic Association, was fully on board. Ward 1 Councilor Adam Gomez, who represents the area, also endorsed the proposal.

The former YMCA Building on Apremont Triangle. It is the among the buildings the new historic district would protect. (via Wikipedia)

Councilor Walsh asked whether the more commercial nature of the district’s buildings affected the restrictions. Murphy indicated it would not and added that the designation could help leverage funds for maintenance and restoration. Indeed, preserving and renovating historical structures often qualifies as a public benefit under programs like the Community Preservation Act.

Ward 7 Councilor Tim Allen asked about the fragmentation of historic districts downtown. Murphy said many other communities have separate commissions for separate districts. Springfield only has one. Therefore, having three districts abut one another has little real impact.

Like the revolving fund ordinance, the historic district will require additional votes. However, it will require a two-thirds vote of the Council under state law.

A few items under suspension at the end of the meeting passed unanimously. The Council limited parking on Detroit Street in East Springfield. The move is meant to discourage employees of nearby businesses from parking all day. The Council also accepted a law change that allows the city change speed limits without state approval.

The Council does not return full-steam until September. However, Monday’s meeting underscored the casino’s continued prominence. Over the next year, the Council may need to ratify other HCA changes and provide additional oversight. While MGM and the administration were forthcoming this time, the Council must remain vigilant. Councilors cannot get lightheaded from the good news in the air.

One thought on “Take My Council, Please: Summertime & the Agenda’s Easy(ish)…”