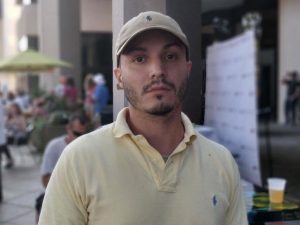 The body found early Monday in a Chicopee park belonged to a prominent Springfield activist according to multiple sources close to the victim.  Jafet Robles, a Springfield resident, was the Western Massachusetts organizer for Neighbor 2 Neighbor (N2N), a community-building organization.  Public Works employees found him dead of a bullet wound this morning in Szot Park, which straddles the city line with Springfield.

Robles’s activism extended beyond N2N, spreading into social justice circles and the political realm. Along with N2N, Robles was among a clutch of younger of activists in the city who agitated against the city’s political status quo, particularly as it relates to minority groups. He was regular presence at progressive, social justice, criminal justice reform, and voting rights events.

The Republican reported this evening that the Hampden District Attorney’s office had confirmed Robles’s death.

Robles’s murder prompted wide-spread shock and disbelief across the region’s activist circles. As N2N’s lead organizer in the 413, he was well-known up and down the Connecticut River.  Some contacted for reaction about the news struggled to contain their emotion as they related what they knew. A gathering this evening at the N2N office in Springfield drew friends of Robles from across the Valley.

Jossie Valentin, a City Councilor in Holyoke, posted about the memorial and Robles’s life on her personal Facebook page. She said she first met Robles when he was a student in her wife’s class.

“I reconnected with Jafet through Adam Gomez and I’m so grateful I had the chance to be a witness to his work and dedication as an activist and organizer,” Valentin wrote. “He will be truly missed.”

Further tributes came in from other officials including community groups and elected leaders from Springfield’s North End including the city’s Ward 1 Councilor Adam Gomez and State Representative Carlos Gonzalez.

“I am at a loss for words during a sorrowful time,” Gonzalez wrote on his Facebook page. “May there be comfort in knowing ‘Jafet’ will never be forgotten. Comunidad”

This is a developing story. More to come.