Courting 36 Court: Felix Ready to Get into the Game…

Marilyn Felix says raising her kids kept her from diving into the political arena, but it has always held her interest. Now, changes in her life make that contribution possible. Felix argues her experience managing housing programs and related budgets give skills that could contribute to the Council.

WMassP&I: What made you decide to run this time around?

Marilyn Felix:  Well, around the end of last year, my daughter graduated from college. She was away for four years.  I’m a single parent [and] have a 16 year old. She’s coming back [and] can take care of a lot of the stuff.  I’ve always looked at the political scene. I’ve always paid attention what’s going on in Springfield.  But I didn’t have a whole lot of time to give and now I do.

WMP&I:  You work as the section 8 director for the West Springfield Housing Authority. Tell us a little bit about you do in that role.

MF:  Well, I do it from the front end to the back.  I’m the person who handles, talks to the tenants and the landlords, and HUD whenever we need to.  I meet with them as well, help [tenants] find apartments, talk to landlords.  I oversee the budget monthly and annually.  We have to make sure that our budget comes as close as possible to what we’re being funded. So I’ve been doing that for 13 years.

WMP&I:  You mentioned financial issues in your platform.  Is housing an issue you’re looking at, too, and how would you apply your experiences from that to the council?

MF:  Housing has been in my background for a long time.  Thirty years as a matter of fact.  As far as housing goes, I think that we need to find out what we have here as far as housing, with apartments, with single homes, with multi-family homes before we even tackle anything.  We don’t…I know that a concern is market rate housing. I believe that we don’t want to push out the middle-income people. We want to make sure that we do have market rate housing.  But we also want to make sure our lower income residents are able to continue to live in the city. Its a balance, and I don’t think we can actually get that balance until we know what we have.

WMP&I:  A census of sorts for housing stock?

WMP&I:  What are some other issues you would focus on if elected?

MF:  I think the economic development is… They’re doing a really good job with it.  I think we want to make sure, when we do have developers come into the city and develop properties, that the benefits to the community, to Springfield, are just as good as it is for them.  We want to make sure it’s beneficial for both of us.

WMP&I: Do you think that the city is providing the kind of attention that it needs to those areas outside of downtown, and if not, what would you want to see the council do to change that? 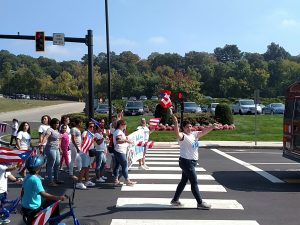 MF:  Well, because recently we received a lot of funding to develop Springfield and downtown Springfield and the South End.  I understand that that funding was geared toward that community, especially because of the tornado and MGM. I know that with the development, we’re receiving additional income. I’d like to see more of that happening in the rest of the neighborhoods, more of the parks get redone.  The North End needs a little bit of help.  I see that they’re doing the streets, but there are some parts that I’d like to see taken care of. We need to bring some of what we’re doing in downtown [in] the rest of the neighborhoods. I think in the newspaper today, they’re going to match the rent from Tower Square to Union Station. I think something like that would be beneficial in other areas. There’s funding for storefronts, but only for certain areas.

WMP&I: How has being a candidate been? What’s the experience been like?

MF: The people that I’m meeting when I’m going door to door are very, very nice. It’s been a lot of work.  It takes a lot of guts to do it. There’s cliques. I find that having thick skin, having a lot of guts, having a lot of courage has helped me get through this initial part.  I think I’m at a place where now maybe the…It’s been difficult because I was not involved in the political scene and I came in after people had already aligned themselves with other candidates.  They didn’t really have an opportunity to learn my views and who I was because I had not been involved, because I was too busy raising my daughters, running a household and having a career.

WMP&I:  Shifting gears to something more lighthearted.  What are some of the unique places in Springfield you like to spend your time, your money?

MF:  Downtown Springfield, I enjoy the arts, cultural events.  I really enjoy it and I have a daughter who does spoken word and she’s been doing that for a while now so I take her around a lot. Daryl Moss has a lot of stuff that he has for people for us, you know.  There are just so many of these jazz festivals that happen.  There’s so many things that are really good and people don’t about.

I’ve gone into stores or talked to people, and talked: I’m going here or I’m going there.  They’re like “Really? I didn’t know that was going on.”  I think that’s a little piece of what Springfield should be focusing on.  I know the police department is focusing on marketing to get them out there the positive. People have a bad perception of Springfield. If we did a little campaign of how wonderful Springfield is and the different things that are available, that’ll be helpful.

WMP&I:  Are there any political figures within the area that model how you would be as a city councilor?

MF:  I think [Ward 7 Councilor] Tim Allen. I’ve watched him in the meetings. He pays attention a lot to the budgeting and he asks questions. I think that [State Rep] Carlos [Gonzalez] is really good. He’s a really decent person, a people person.  I like the way he interacts with people, and he makes people feel comfortable. I’d like to make everyone feel comfortable so that they tell me concerns so that I can in turn do something about that.

WMP&I:  Is the anything else you’d want to add?

MF:    Yes. I think that a lot of people have not seen me in the community and that’s been…Some community leaders have made that some type of issue. What I do, I don’t highlight my life. But I’ve been doing community building for 30 years.  I worked out of CVC when I was 20 years old. It was based out of Boston and we had an office here. We worked in the North End.  We worked with Heriberto Flores, with Mike Rivas.  There was Austin Miller. I was there.  I’ve been doing this for a while. So I have a huge background in community building and fiscal background that I know I can offer to the city council.

Interview conducted at Dunkin Donuts at the “X.”