Two years ago, Jesse Lederman fell short of an at-large Council seat in a year with no retirements. Now two councilors are retiring. Lederman has added to his political organizing and issue advocacy resume. He has also sharpened the neighborhood plank of his platform in hopes to win a seat this year.

WMassP&I: You ran last time around for at-large, didn’t quite make it. What made you try to go for it again this time?

Jesse Lederman: I think the important thing to recognize is that after 2015 we didn’t fade away. So, myself, my supporters, we ran, because I had been doing a lot of work that led me to interact with local government. After the 2015 election, though we weren’t successful, I essentially went back to doing what I was doing before, advocating for Columbia Gas to fix 500 gas leaks, working on the Springfield climate action plan. When 2017 came along, we looked at our numbers from 2015, I talked with folks who had supported me before from different parts of the city and really felt very encouraged by members of the community to try again.

WMP&I: Obviously two open seats helps, but what have you done this time that will be helpful to winning this time?

JL: I think first of all over the last year and a half I’ve gained a lot more experience. Experiences that I’ve had has made me even more familiar with the process of local government. Also given me exposure to an even broad number of groups in the community.

Certainly [this] is something we did in 2015, but what I have really done is spent almost every evening, every weekend out knocking on doors and neighborhoods talking with people about the issues that impact them. And I think one-on-one connection is really helpful.

WMP&I: What issue would you like to see tackled on the Council, where in an ordinance or an order? Put it into concrete terms.

JL: The City Council does is [serves] as a conduit between the neighborhoods and the local government. We’ve put my cell phone number on every piece of literature. The reason is so folks can contact me issues as a candidate. In the event that I’m successful, we want folks to have a direct line to one of their at-large city councilors. As far as, how does that translate into legislation on the council? I think one of the things that I’d look at is how can we strengthen our neighborhood councils and create more local control. I’d like to formalize a longstanding practice to send special permit requests to neighborhood councils and civic associations before they’re voted on [by the Council]. Not just a courtesy we extend but actually part of our permitting process. 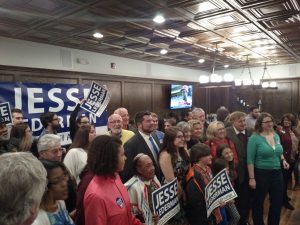 Lederman with supporters at his kickoff this year. (WMassP&I)

WMP&I: Your career has taken you to statewide political campaigns. Is there a role for a councilor beyond the city and how would you fill it?

JL: I think there’s absolutely a role for councilors beyond the city. What that can look like is working in tandem with our state legislators, keeping in very close contact with them around local budget concerns, local advocacy concerns. One of the roles that I took part in professionally prior to my to my current work was as a statewide political organizer. I’m very comfortable and have very strong relationships with folks throughout the state. I’d like to spend some time in Boston, talking with legislators, talking with state officials about the needs and concerns that we face here in Springfield. Not just going east to Boston, but also looking to our north, our west work together with communities like Holyoke, in the upper valley, Pittsfield. How do we create exchanges of ideas and information, best practices?

WMP&I: What are some of the unique Springfield establishments that you like to spend your time and money at?

JL: I think one of the great things about Springfield is the diversity and amount of things to do. I spend a lot of time in local restaurants downtown, regularly go to Theodores. Like going over to Russ’s diner and Murphy’s. I’m a big fan of breakfast. I think one of the other things I spend a lot of time in is in our public parks. We have a very large amount of open space for a city our size. One of things I’m concerned about seeing is those public parks and open spaces maintained. That’s a quality of life issue.

JL: Well I’ve been really fortunate to be mentored by some folks in Springfield government. Three really come to mind. The first being E. Henry Twiggs, one of the first people who I interacted with as a young person looking to get involved, took me under his wing, made me an associate member of the Democratic party in Springfield. The man has over 60 years of service to the city of Springfield. Fought in both the modern civil rights movement for ward representation in Springfield and having fought in THE civil rights movement alongside national leaders.

Another, State Rep Ben Swan [is] in that very similar vein. Now retired, always made public service about the people. It was never about him. The other person is city councilor Melvin Edwards. Another person who got his start on a very grassroots level. Started out picking up trash on his street. Then joined Keep Springfield Beautiful, became their president. Melvin was elected to the City Council in 2009 after being essentially a neighborhood activist. I got involved in local activism because of issues that impacted my neighborhood. I think one way I could effect change is to run for office.

WMP&I: Anything else you’d like to add before we close?

JL: I’ve humbled and grateful for the support that I’ve received from throughout the city. Looking very forward the primary election this coming Tuesday and seeing how the numbers go. We’ve been working hard and we take nothing for granted. Really grateful to all the people who are out there with me and the people who are opening their doors and talking to us. If I’m fortunate enough to be elected, we’d like to continue being out in the community. When we get through with this, I’m hopeful we can pick one weekend a month where we still go out into an neighborhood. Talk with folks, hold neighborhood town hall meetings and stay connected to neighborhood councils. What we want folks to hear is our accessibility, our commitment to that… Hopeful that folks will make us one of their five votes in the primary on Tuesday.

Interview conducted at the home of Jesse Lederman in Forest Park on 9/16/17.