Whatever the outcome in this year’s at-large Council election, Kelli Moriarty-Finn is leaving it all on the field. She’s new to city politics, but undeterred by the challenges it presents. The financial services manager and Holyoke native has taken on the role of Springfield defender while laying out ambitious goals if sent to 36 Court Street.

WMassP&I: Tell us a little bit about what you do professionally.

Kelli Moriarty-Finn:  So my entire 25-year career has been spent in the financial services sector.  I work for a global asset management firm by the name of Invesco where I manage projects geared mostly towards our global trading team. My annual project budget is in excess of two to three million dollars.

KMF: When the business, internal to Invesco, brings me the need for a project, it is my sole responsibility to address the necessity of the project, understand its scope, its breadth, its depth, understand what the resource issues will be and then develop a budget.  Then I put into a state of execution and manage it until completion. If I run out of money, did I do a bad job or were there mitigating circumstances necessitating more money? So that to me is budget management 101, which I will be able to bring to the Council from day one.

WMPI: What about Springfield given its virtue and vices, has drawn you in and makes you want to take this kind of step?

KMF:  I did grow up in Holyoke. My parents are still there and I was a product of the Holyoke public schools. I moved here in 2002. What attracted me to Springfield was that there was thriving downtown that I could live in and feel like I could walk safely in. I could walk to restaurants, and night life and I didn’t feel threatened. Then I bought into the Classical condominium building where I lived for many years and spent time on their board of trustees. And it wasn’t until I met my husband that we found our [current] home in Atwater. It was foreclosed property, needed a lot of TLC. Why would we need to move to a Longmeadow and a Wilbraham? We are perfectly in between Boston for work and New York for fun. Springfield has everything we need.

WMPI:  What would an issue area that you’d like to see turn into legislation and put before the council?

KMF:  I’d really like us to work hard in the area of public safety. I’d really like us also to abolish the notion of charter schools. Certainly, I don’t think they’ve been as successful in Springfield as we had expected them to be. What bothers me most about the whole charter school process is that the administrative and the teachers staff qualifications can’t be or don’t have to be as tight or that the spend for a student stays with the charter school even if they transfer mid-year. I also disagree with the concept of schools of choice in Springfield.  There are kids who have been on that list and will graduate high school without ever getting off of that list.

WMPI:  You seem to have a lot of focus on education that traditionally has not necessarily been an area that the City Council…

WMPI:  focused on.  Part of it is due to the nature of the state laws and everything.

WMPI:  How would you try to use your role as a councilor to have an impact on [education] policy?

KMF:  We need to make sure when it comes time for budgeting that we are in lockstep with the School Committee and do our very best to make sure schools get proper funding. We need to make sure that the infrastructure [is maintained].  There are some schools because that are so old they’ve never even had a working cafeteria. I’m so I’m so gung-ho on education because there’s a two-prong misperception about Springfield.  One is the public safety aspect and the second is our public schools.  If you are a young family that’s coming into the to Western Mass, you will think twice about whether not you want to move to Springfield because of the public schools.  As city councilors, we can make sure that [education] budget items are really included, give our teachers and our schools a better than fighting chance [and change] the perception of the school system and the city.

WMPI:  Do you still work in Boston, so you’re there quite a bit… 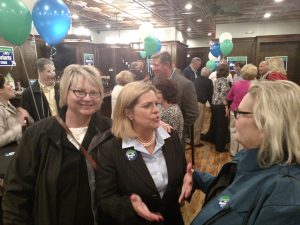 KMF:  So, no. I fully support Senator Lesser and his high-speed rail initiative because [when I do go to Boston for work] I can leave my house at ten of six in the morning and sometimes I’m not there on till 9 am.  When I took my current job, I made an arrangement to start earlier and work later if I can do work from home.  On average, I get up and I am at my desk by 7 am.  Most days I am not out until 6 or 6:30. But no, I don’t do the commute.

WMPI: That brings me to my original point, do you see a role of a councilor as being as advocating for the city also in Boston as well. Traditionally there’s been a very insular attitude like we’re out here and they’re out there.

KMF:  Excellent question.  Case in point, yesterday, Mike Ross, from Boston magazine came out and said that Springfield is New England’s version of Detroit and that Springfield is dying, and I was appalled.  So, I reached out to Shira Schoenberg with a little rebuttal saying this is totally absurd and inappropriate response.  I don’t know when Mr. Ross last came to Western Massachusetts and Springfield specifically. We have great neighborhoods.  I’ve been walking in them since April.  We’ve got theater and we’ve got business. We’ve got everything that people need. Now, I know colleagues in Boston think that one you pass Worcester your car falls off the Mass Pike.  So again, yes we sorely need Springfield advocates in Boston.

WMPI:  What are some like businesses or places that you like to patronize, spend your time that are unique to Springfield?

KMF:  Sure. Well, I’m going to botch the name because I always do.  Kim Sum Ba, the Korean food in downtown. Phenomenal food!  I love going there. Chef Wayne on Liberty Street love his jambalya. I love my Big Y out near Serv-U.  You know, this is a great city that has a lot things and people have as small business owners taken a big risk to stay in Springfield and put their name out on a shingle and make it work.

WMPI:  What area political figure would want to model as a councilor?

KMF: I have taken a lot of mentorship from former judge Mary Hurley, now a governor’s council.  Mary actually married my husband and me four years ago and has provided good counsel.  Mary is tenacious and outspoken as you saw today on MassLive.  She is calling for the governor’s council to actually have some formal written rules and regulations.  Mary is vocal and one of the reasons I decided to run is because I want to be a vocal advocate for Springfield too.

KMF:  It’s been a fun campaign season. It’s been a marathon.  It’s been a sprint.  I think the most enjoyable portion about all of it for me has been knocking on doors.  Because people when they do answer the door, which you know, happens occasionally, not so often, they just want, they want to be heard. Knocking on doors is been wildly fun and meeting people and seeing neighborhoods that normally I don’t get to go through.  And you know what? If I don’t get in, you’ll see me in a year and a half.