Justin Hurst says Springfield residents have been clamoring for somebody to speak out and argues he’s been doing just that. Residency remains a priority, but other matters are competing for his attention too even as the Council’s at-large membership undergoes major turnover.

WMassP&I: What do you want to accomplish in the new term?

Justin Hurst: First of all, I want to continue to be a voice for the citizens of Springfield. I think for far, far too long, we’ve had a lot of things happening that the general population has been disappointed with or not satisfied with. [But they] haven’t really had a vocal mouthpiece who wasn’t afraid to address the tough issues—residency, transparency, and accountability in city hall, the police department or the fire department. I want to be that, I want to continue to be that voice and speak up when most people might be a little apprehensive to do so.

WMP&I: It’s not a dramatic statement to say the incumbents are favored this time around with two open seats. You’re going to have two brand new at-large colleagues no matter what happens in January. How do you see that affecting the council?

JH: Let’s me start off by saying the councilors who are leaving the Council will be sorely missed. I think they have contributed a lot over the years. They certainly have served as my advisers in terms of acclimating me to the City Council. I certainly, I will miss them. I do think that a lot of people are asking for fresh ideas and new energy, so hopefully the candidates that are elected will bring [that]. I’m excited, but at the same time, you might have to play a leadership role a little earlier than anticipated. I don’t mind. I’m excited about the pool of candidates. Every last one of them has something to offer.

WMP&I: Over the last year or term or so, you’ve developed an image as a residency hawk. The next front on that is enforcement. Given the restraints like civil service, what is a win on enforcement going to look like?

JH: That’s a good question. You have to have some follow-up and accountability. It seems to me there needs to be a coordinated effort from the mayor’s office in conjunction with human resources, the law department to make sure individuals in violation are held accountable. There needs to be a little bit more due diligence in terms of monitoring. It is easy to hire somebody and have them commit to residency at the outset, but what happens two years from now, five years from now? I mean ideally if everybody is on the same page and if everybody wants their tax dollars to stay in the city of Springfield, then they will be receptive to enforcement.

WMP&I: Do you see the Council as perhaps legislative or more oversight in trying to make that happen?

JH: I think it’s a combination of both. I think from a legislative standpoint, we still need to approve the collective bargaining that comes before us. You still have two big unions–I think the teachers’ union is a bit far off–but you still have the rank & file police officers, police union [without a contract]. The hope is that that’ll come before us and have residency language in it similar to what the firefighters did. You still have the district chiefs, who we’re going to have to revisit. I’m not 100% sure that there is a clear-cut resolution, but I’m hopeful we can find [one] that at the very least doesn’t allow over $1 million to be taken outside this city.

WMP&I: Other than residency what are some of the issues you’re looking to address in the upcoming term? 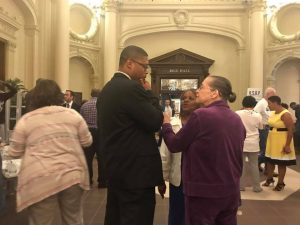 JH: Everybody has talked about the police commission. My hope is that we can get that done. I’m eager to see the results of the committee that [Council President] Orlando [Ramos] put together and what the general public has had to say regarding the police department. What type of police commission or police oversight committee, what they think would be the best fit? On a campaign trail, I’ve seen a lot of issues regarding public safety. Not public safety in the sense in terms of crime, but whether there’s adequate street lighting, adequate crosswalks where they need to be. It’s something that I need to do my due diligence on.

We also have the trash fee and the potentially increases in the trash fee and possible decrease in barrel size. Then you have MGM. You can’t forget about MGM. There needs to be a lot of oversight. I think the City Council has done a pretty good job, but to be honest with you it’s a mammoth project and there are a lot of nuances that, if you’re not paying attention, will be missed.

WMP&I: What are some of the institutions in Springfield that you like to patronize, spend your time at, spend your money at?

JH: Some of the institutions?

JH: My wife [School Committee member Denise Hurst] and I love to eat and so we’re constantly ordering pasta buckets from Typical Sicilian. We’re also down at Theodore’s quite often. I’m excited for MGM and the fact that there might be some more entertainment here. I also look what [Springfield Cultural District Executive Director] Morgan [Drewniany] is doing down in the cultural district just in general. I had the opportunity to go to one of her art stops, or art walks. That was a great time. I think there are a lot of things happening here. There are a lot of things going on in Springfield. If you just do your research you’ll be able to find something that will excite you.

WMP&I: Who do you try to model yourself after in terms of local politics, that you try to emulate?

JH: I look at my mother [former School Committee member Marjorie Hurst] and my wife. They have a similar mentality, when it comes to engaging with people that I would love to acquire. It’s not easy putting yourself out front, networking, just showing up in a lot of places and interacting. I know that something might seem easy, but I take a little bit more after my father. It’s easy for me to be a vocal mouthpiece, but it’s not as easy for me to get out front and make those connections.

WMP&I: Anything else you’d like to add before we close?

JH: It’s been an honor and privilege serving the citizens of Springfield. I’m hopeful that people see the work that I do every day and that they’re proud of work as I’m proud of [it]. I have two young kids. I want my kids to enjoy Springfield the way I did when I was growing up. I’m hopeful people will take note and I encourage them, even if it’s not me—although I would love for it to be me—to get out and vote on September 19 and then in the general election.