This post is the second of several profiles of Springfield at-large School Committee candidates. 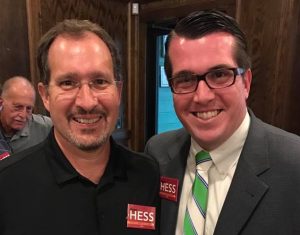 Ryan Hess, right, thinking ahead to his kids education perhaps as father Ralph, left, did for him. (via Facebook/Hess campaign)

SPRINGFIELD—A more frequent phenomenon is the tendency of the area’s young people to depart or not return after college. Job prospects or new ties draw them away. For the Valley, it means a graying population and fewer skilled residents, who got their start in area schools, coming back. Those that do return need things their young families will need, like schools.

The public schools’ reputation in recent years has not always favored Springfield, exacerbating the brain drain here. But some do remain or move back to the City of Homes and start families.  One, Ryan Hess, is running for School Committee at-large, having returned to Springfield a few years ago. Implicit in his campaign is a counterpoint to prevailing wisdom about the intractable inadequacy of city schools, by the extension Springfield itself.

“The conversation started with my wife around how I could create a bigger impact on the city,” they had recently moved back to. “It seemed to fit right,” Hess said or running for School Committee.

In the at-large Committee race, Hess has the role of the school parent-to-be.  His two daughters, one not yet six months, are a bit off from school. He is also an alum of Mary Lynch Elementary and Chestnut Accelerated Middle School himself.  Hess went on to Cathedral—as other family had and for religious reasons, he says—and later Stonehill College in Easton.

To be among them…the Springfield School Committee circa 2016. (via Focus Springfield)

A few years ago, Hess and his wife moved back to Springfield where he has pursued a career in banking.  Currently a vice-president for commercial lending on People’s United Bank, Hess joined the Zoning Board of Appeals this past summer.

In an interview with WMassP&I, Hess said he would apply his finance background to the School Committee’s budget. His job has him working closely with commercial businesses—and some nonprofits—in Western and Central Massachusetts. That includes analyzing their budget and how they spend, cut, obtain grants and invest.

Analogizing it to the schools, “Step one is making sure that the school budget is allocated correctly.” “Only then,” Hess continued, “can we make sure our teachers and our schools themselves have the right resources…to deliver that great service to our students.”

Finances will loom large with education funds at risk in the current environment in Washington.  Hess said charter school reimbursement were on the top of his list, namely ensuring the state fully reimburses.  As with other candidates running, Hess said cuts must fall on the classroom lastly if at all

In terms of resume, Hess makes a compelling case, but politically he faces some headwinds.  Though there is an open seat with Norman Roldan’s retirement, Hess placed fourth in the September preliminary. Incumbent Denise Hurst, former City Councilor Jimmy Ferrera, and fellow newcomer LaTonia Monroe Naylor were ahead of Hess.

At the same time, Hess has noteworthy support for somebody his age and newness to city politics. It does not hurt that his uncle is at-large City Councilor Thomas Ashe. But Hess’s supporters include Mayor Domenic Sarno—who by virtue of his office also sits on the School Committee—Ward 2 Councilor Michael Fenton, several labor organizations and State Representative Jose Tosado.

In an email, Tosado said he and Hess’s family go back years.  “I know Ryan to be a person of high values and committed to making Springfield a City that values education as a means for upward mobility for the people who live here,” Tosado wrote.

On the trail, Hess has emphasized student performance, school safety and parental involvement.

In public appearances Hess has emphasized the support—and expectations—he had at home, but he acknowledged not all students do.  However, reflecting on his experience in both public and private school, Hess said there a support system consistently existed at school, too. That may be lacking today.

“I think there is an opportunity for parents, teachers, and administration to communicate in a much better way,” Hess aid.

An app for that? (via wikipedia)

Speaking to WMassP&I and in campaign stops, he suggested looking to technology, such as apps and mobile device, to help connect schools to busy parents working several jobs or lack effective transportation.

For Hess, safety takes on many dimensions. Hess spoke at length about reviving peer-mediation programs the middle and high school level.  He acknowledged such programs can be “capital intensive. However, they pay off in the end.  Mediation could also be a solution to bullying, Hess said.

Yet, safety is a complex issue especially in schools. Concurrent to a growing desire for criminal justice reform are questions about the role and place of police in schools.

“As a member of the school committee, never would I have any intention of setting up a school environment that sets up our child up to be sent to jail rather than continuing their education,” Hess said.

Hess said they are not there to investigate petty incidents, but to ensure physical safety and guard against Columbine or Newtown-style attacks. However, school resource officers could play a positive role in students’ lives with the interaction an opportunity to benefit both and their relationship.

Hess has also incorporated the battle against the opiate crisis into his campaign. Last week he called for opiate education and professional development programs for students and faculty respectively. Hess also called for school nurses offices to stock Narcan, an anti-overdose medication. 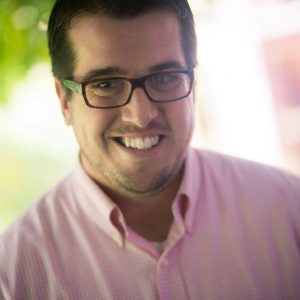 The transition to candidate is daunting for anybody and Springfield is huge city in which to campaign and knock doors.

“You don’t understand how large Springfield is until you try to walk it,” despite being born and growing up here he joked.

Breaking through can be tough. Nonetheless, Hess argues being new to the political scene is an asset. He can approach issues with an open mind and listen.

“This has been a tremendous experience, one I’ll never forget,” Hess said. “Hopefully we’ve put enough work in to make sure it’s successful.”