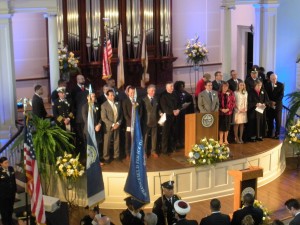 All the fixings were in place. The table was set. Surely, this would be the year Springfield voters would awaken to scarf down the opportunity two open at-large Council seats presented. But once all the ballots were in, turnout was just as disappointing than past cycles, if not more so. City democracy champions were the ones going home hungry.

The open seats this year were not the first thing activists hoped would jolt Springfield voters into action. Before that came ward representation. It has not—though ward races are reassuringly competitive. This indifference from the populace is corrosive and threatens the very legitimacy of the city’s government. It must be reversed. But how?

Springfield did not arrive at this sad place—less than 11,000 residents voted last month—overnight. Turnout has been iffy in the city for at least 35 years. Mayoral turnout collapsed in 2015 mayoral race undermining the suggestion of some the Council should have four-year terms to match the mayor’s. The 2015 turnout was lower than even years the mayor ran unopposed. 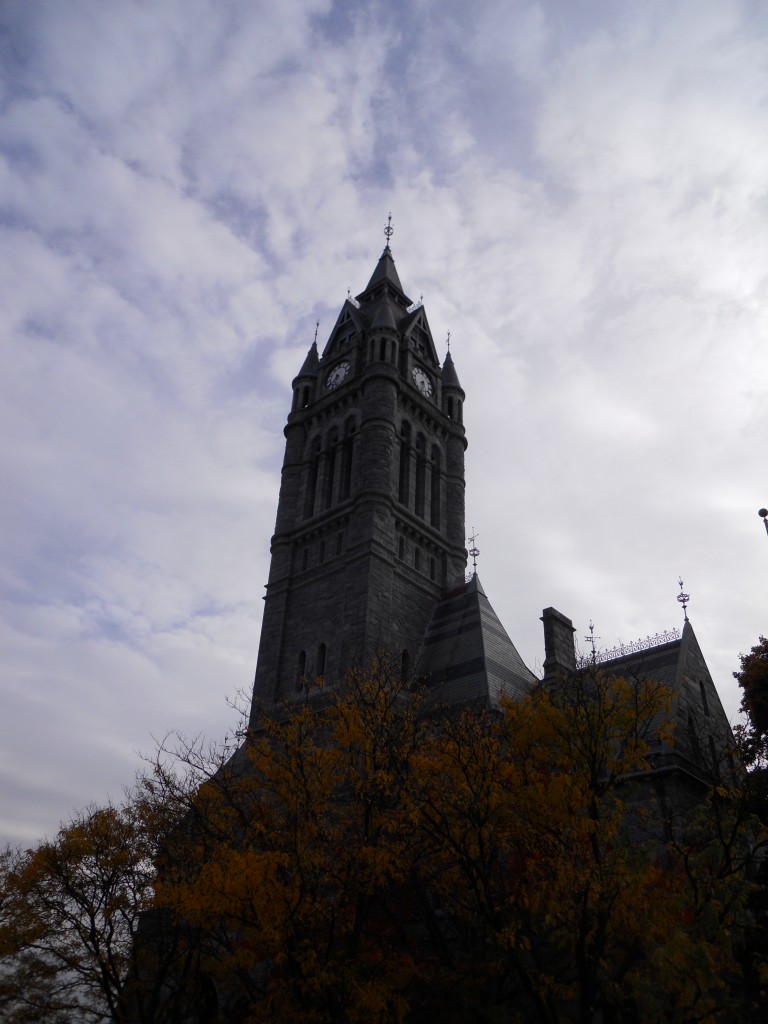 What is in Holyoke’s Secret Sauce? (WMassP&I)

Many observers will reach for is the city’s demographics. This analysis is lazy. When turnout began to plunge in the late 1970’s and early 1980’s, Springfield was considerably wealthier and whiter than it is today. Moreover, Holyoke, which though smaller mirrors many of Springfield’s demographics, has posted turnout surpassing 40% in recent municipal elections.

In Springfield’s most competitive mayoral contests of the last 25 years, not even 30,000 voters have participated, 1995 aside. That year the battle royale between Michael Albano and Charles Ryan drew 36,000 voters. Percentage-wise, turnout may have been higher, but far fewer than the roughly 100,000 registered voters today were signed up for those elections.

The low turnout is not entirely an accident. Some forces behind the scenes like it that way. Political conditions in the city have perpetuated a frustration that city elections are irrelevant or unlikely to change much. That leaves a smaller pool of people to influence and, even control.

There is another factor. While residents have responsibility for disengaging, Springfield officeholders are guilty too. Holyoke’s turnout was not sui genesis. It happened in part because of groups like Citizens for the Revitalization and Urban Success of Holyoke (CRUSH). Then, once elected, Mayor Alex Morse solicited the broader public for appointments to boards and commissions. That fostered ownerships among residents and, in turn, awareness of municipal elections and their importance. 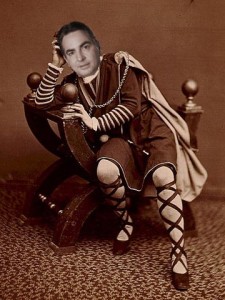 Those with sound and fury get appointments. (image made via Springfield mayoral portrait & loc.gov files)

By comparison, Springfield Mayor Domenic Sarno has said he doesn’t actively solicit the public, but waits for residents to express interest. In his defense, Sarno has appointed some who have written him. But given already anemic participation, this “come-to-us” posture only discourages participation.

What is the solution then?

The first requires the city and its officials to reach out by any means necessary. This means embracing new methods and ideas, even in this notoriously conservative city.

When the Control Board came to town 13 years ago, it found some departments still using paper filing systems other communities had long since computerized. Getting its risk-averse officials to embrace social media fully and completely will not be easy.

Ironically, some departments including Elections, Fire, Police and Public Works are among  the city’s most prodigious social media users. Those departments must broaden their reach. Individual electeds also have to consistently engage city’s cyberscape or reassess how they do.

Voting Lists for Springfield are ready for the election on Tuesday! Is your name on one of these lists? GO VOTE. #mapoli #gotv #votespfld pic.twitter.com/ula8jbYIzJ

City officials have claimed many communities, especially poorer ones, do not respond to outreach. For what it’s worth, councilors from those neighborhoods have said, aside from Pearl Street’s C3 program, 36 Court Street’s outreach efforts have been lacking. Nonetheless, Springfield government must continue to bring itself to residents and keep trying whatever the interest.

Again, the Holyoke example is helpful. Springfield’s boards and commission are packed with familiar faces, much as Holyoke’s once were, or are vacant and rendered functionless. Sarno should appoint all legally constituted positions, but the city should also advertise them and encourage residents to apply. We have beat this drum before, but this change must come. 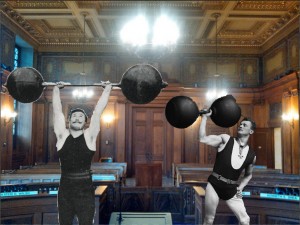 Up and at ’em boys (and girl). (created via WMassP&I, Wikipidia, and Google image search)

This is where the Council comes in. It can use its legislative powers and oversight responsibilities to goad the administration into reaching past the usual suspects when searching for appointees. In fact, the body has done this itself when appointing ad hoc committees.

One consequence of this would be a realization that councilors have power and those who would prefer they keep quiet have less. It comes at a time when the old powers in the city are fading.

Old guard political figures and The Republican lack the influence they once had. The former group tend to keep up the charade. The latter, suffering circulation declines and staff cuts, also faces competitive pressure from its online alter-ego Masslive and New England Public Radio.

The city’s small “d” democrats could also appeal for help beyond the city’s borders.

For example, it is in statewide (capital “D”) Democrats’ interests to boost turnout in Springfield. While presidential-year turnout in the city has ratcheted up, it remains stagnant in gubernatorial years.

Former President Barack Obama’s 2008 election followed by his 2012 reelection—bolstered by Senator Elizabeth Warren’s ground game that year—seemed to establish a new floor for Springfield turnout, which Hillary Clinton maintained. Despite Springfield’s economic troubles and population stagnation, 11,000 more Springfield residents voted in 2012 and 2016 compared to 2000. Even fewer voted in 2004 when Massachusetts’s own John Kerry was the Democratic nominee for president. 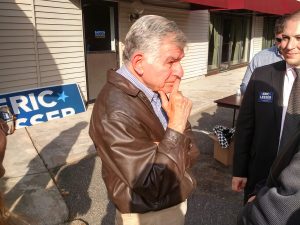 The year the “Duke” (unsuccessfully) ran for lieutenant governor with Boston Mayor Kevin White, more than 44,000 Springfieldians showed up at the polls. (WMassP&I)

Very likely anybody who votes in municipal elections will show for gubernatorial elections. Because Springfield is so Democratic, added city turnout could bolster statewide Democrats or push Republican leftward—Springfield used to spawn many liberal Republicans itself.

State political parties or advocacy groups have historically avoided Springfield politics or engaged superficially. Though some groups have engaged, many prefer to not upset alleged powers that be. Such groups should brush aside such concerns or any complaints that do arise. Somebody protecting their own at the city or state’s expense is no ally worth placating. Those actually worth the time, however, will make a fair deal.

A final component of this is media. This one may be the hardest problem to correct. The Springfield-area media is in a strange place where there is more competition, but insufficient newsgathering especially in Springfield proper. Content milling and boilerplate fire and crime stories may drive clicks and attract eyeballs to televisions, but they add little to the texture of Springfield life.

There is good journalism in, on or about Springfield from all outlets, but it is spare relative to the stories in need of telling.

Masslive, The Republican, NEPR, The Reminder and Focus Springfield, the city’s public access network, have been trying with tangible results. Yet, at the risk of throwing our hands up in despair, the economics of good, particularly local journalism remain daunting

The sooner a viable strategy to fund local media is found, the better for Springfield and its residents’ ability to connect with their local elections, politics and government.

The consequences of the status quo are not good. As this blog observed before, Domenic Sarno has no real mandate. He may have slaughtered his opposition in 2015, but the turnout was so low, he earned only the right to rule. Yes, decisions are made by those who show up. Yet, to govern—especially as absolutely as Sarno does—with the sanction of but a sliver of the population, tests the boundaries of representative government.

For residents, it means a familiar cycle of under-administration set against the region’s poor economy. The need for economic development far outstrips even the rosiest of projections due to come from MGM other developments.

Moreover, economic policy is not the only need. Policing, neighborhood development, parks, planning, etc, etc require attention and innovation. The head of many of those departments are doing well enough, but dismal citizen participation limits their potential.

It will take commitment to correct these problems. It must produce a common solution, not something to one’s own advantage. Those who won’t offer that commitment in earnest, have strut and fretted upon the city’s stage for long enough.