The Not Quite Glorious Property Tax Burden in Springfield… 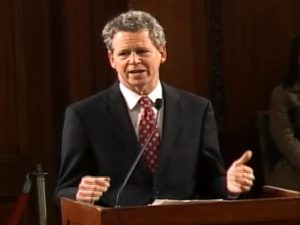 Board of Assessors Chair Richard Allen (via Focus Springfield)

SPRINGFIELD—The annual tug-of-war between residential and commercial property owners and their tax rates ended slightly in favor of residents this year. Each year, the City Council must set the rates, which distribute the property tax burden. The total amount to be collected was already determined with the budget before July, but who pays what attracts just as much attention.

Richard Allen, the chair of the Board of Assessor, presented Mayor Domenic’s Sarno recommendation to the Council.  Residences would be taxed at $19.69 per thousand of value while commercial property would be $39.25. The rates may also be seen as 1.969% and 3.925% of value.  This represents an increase of 3 and 19 cents respectively from this year. 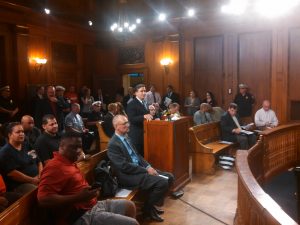 Mayor Domenic Sarno at the 2016 budget vote. The total amount of taxes to be collected is decided then, not at the rate-setting meeting. (WMassP&I)

The city should collect about $198 million in property taxes in 2018, not quite $7 million more than the previous year. Last year the city enjoyed a larger increase and avoided hitting its levy ceiling under Proposition 2 ½. That 1980 law caps year over year property tax increases at 2.5% plus new growth, together known as the levy limit. It also imposes a hard cap or levy ceiling on property tax revenue of 2.5% of all taxable property in a community.

Richard Allen said the city’s property values continue their claw out of the abyss left by the Great Recession. Like last year, the recovery is uneven, particularly for commercial property.

“Commercial/industrial overall has not grown at the rate residential has,” he said.

According to documents the Assessor’s office distributed, this year the value of all taxable property in the city rose to approximately $7.93 billion from $7.66 billion. Nearly all of that was residential value growth, which leapt $220 million from FY2017 to FY2018. Commercial only grew by about $48 million.

However, Creed pointed out that despite representing barely more than a quarter of all taxable property, commercial property bore nearly 43% of all property taxes.

“The chamber recognizes the difficult task you have in front of you,” Creed said. Yet, she urged them to send businesses a message of support by not letting the rate exceed Sarno’s $39.25 recommendation.

Allen also noted that MGM has a PILOT itself under Chapter 121A, the commonwealth’s urban redevelopment code. The casino is already paying a pre-set amount to the city that avoids the hassle of trying to value the casino itself. He observed that shifting casino market conditions have wreaked havoc on gaming towns like Atlantic City. The PILOT, part of Springfield’s host community agreement with MGM Springfield, avoids this problem. However, Allen demurred on whether that money could offset future tax bills.

As MGM pays a PILOT, it is not part of the $7.93 billion in taxable property in the city. (via Springfield City Hall)

“That’s really a conversation with the budgetary officials and the mayor,” he said. “I’m not in those discussions about how to spend the money.”

Because of the PILOT, MGM’s property is not part of the city’s total taxable property figure.

The Council ultimately rejected Sarno’s proposal on a 6-5 vote. Seven votes were needed.

Councilors Allen, Thomas Ashe, Melvin Edwards, Adam Gomez, Ken Shea and Kateri Walsh backed the rates the mayor suggested. Ward 2 Councilor Michael Fenton then moved to reduce the residential rate by a penny to $19.68 per thousand. That, in turn, kicked the commercial rate up to $39.28 per thousand. Those rates passed 9-2. Councilor Bud Williams and Marcus Williams dissented.

Since regaining power from the Control Board, the Springfield City Council has not gone full populism.  It has seesawed between the pleas of commercial and residential landowners. Although in this circumstance it favored the latter, the shift was slightly enough to maintain the current gap between how each class of property owner pay.

Not surprisingly, the subject of broader tax relief hovered over the whole debate.  However, as Allen noted on several occasions, most of the power there lies on Beacon Hill.