No Better Kickoff to 2018 than a Local Inauguration… 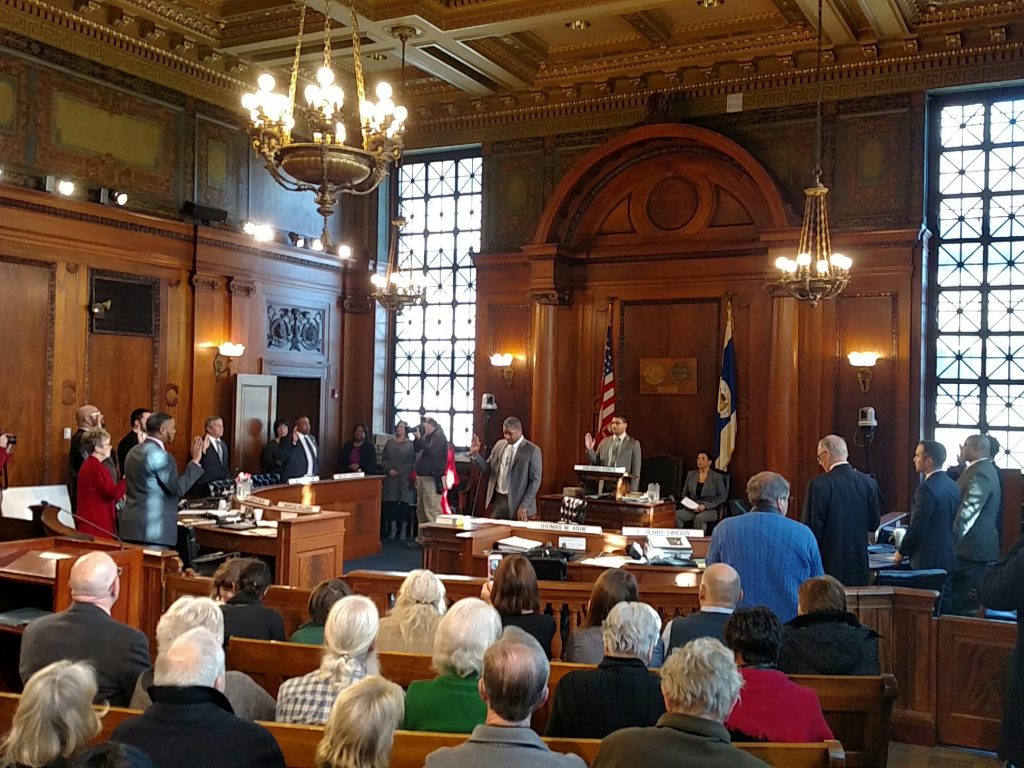 SPRINGFIELD—Amid frigid temperatures, rare New Year’s Day inaugurations formally installed new councilors two of the region’s largest cities installed last week.  Both Chicopee and Springfield swore in their city councils Monday. Council races were the highlights of both cities’ elections and the beginning of the term marked the culmination of months of campaigning.

In Chicopee, Mayor Richard Kos was also sworn into the third term of his current tenure, although he was unopposed in November. Springfield Mayor Domenic Sarno is midway through a four-year term and did not face voters last year. 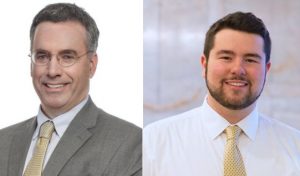 Although turnout was poor, especially in Springfield, the inaugurations represented transition in both cities. Lederman, who unsuccessfully sought a seat in 2015, became the body’s youngest serving city councilor. Joining him was Ryan, who had served from 1994 to 2003 and been away from politics—other than his father Charles Ryan’s mayoralty—since. However, they replace councilors Timothy Rooke and Bud Williams, whose 22 years of service each spanned a period of particular Council weakness.

“I wanted to take this opportunity to show my daughter and to show other young women her age just like her that there are many women here in the city of Springfield who accomplish great things,” Ramos said in his speech. 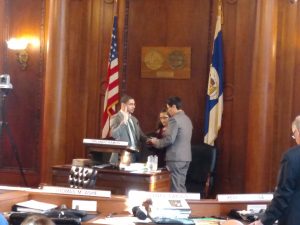 Left unstated, but clearly implicated by Ramos’ choice of ceremony participants is the dearth of elected women in Springfield. Women only hold five seats across all levels of government particular to the city. Four women hold School Committee seats and Kateri Walsh holds one on the Council. No women currently represent Springfield in the legislature.

Women do hold state and Hampden County-based offices, however.

Ramos promised to act on the police-community relations work begun last year. His ad hoc committee on the subject recently delivered more than 150 pages of recommendations for the body’s review. He also noted progress on enforcing residency.

Ramos also said he wanted the city to have a conversation about race. He was reluctant to even broach the subject, which is often charged, manipulated and misunderstood.

“While we may differ in several ways,” he said, “I’m certain that we can agree that what bonds us together is our love for the city of Springfield and our desire to contribute to its success.” He expressed pride in the Council’s passage of a resolution condemning bigotry and hatred follow the white supremacist rallies in Charlottesville. One white nationalist from the rally later allegedly killed a counter-protester.

At-large Councilor Thomas Ashe and Ward 4 Councilor E. Henry Twiggs were absent from the ceremony. Sources say the death of a close friend prompted Ashe’s absence while Twiggs has been unwell of late. City Clerk Anthony Wilson, who administered the oath to all councilors Monday, will likely swear in Ashe and Twiggs at the next meeting they attend.

Typically, the Springfield School Committee take its oath a few hours after the City Council. However, members will take their oaths Tuesday.

Holyoke and Westfield will swear in its mayors and councilors on Tuesday. Alex Morse shall become the first Holyoke Mayor sworn into a four-year term. The Council is also changing. Per a 2015 charter change, the city elected two fewer at-large councilors, pushing out two incumbents. Juan Anderson-Burgos will also succeed Kevin Jourdain, who retired from the Ward 6 seat.