SPRINGFIELD—The first regular City Council meeting coasted to a quick finish Monday night, a consequence of its small, uncontroversial agenda. Timing likely played a role in the slim to-do list. The body was only sworn in last week and submissions for this week’s agenda were due last Wednesday.

There was consequence, nonetheless. A student-led proposal to raise the age to buy tobacco products passed unanimously. The item had received initial approval at the last meeting and face no opposition on the Council.

Councilors Adam Gomez, E. Henry Twiggs and Timothy Allen were absent. Allen and Gomez were en route, but the meeting ended before they arrived.

Monday’s vote to approve second and third steps advances the tobacco ordinance to Mayor Domenic Sarno for his signature. Given that his Health & Human Services chief Helen Caulton-Harris is a big proponent, the ordinance will almost certainly become law.

Technically, the ordinance does not raise the buying age to 21. The Public Health Council already did that. Rather, the ordinance harmonizes applies existing fines for noncompliance to the new age.

With most details hashed out last month, councilors praised the involvement of students.

“It’s not easy as a young person to come forward to speak in front of an audience like this especially on an issue that sometimes can get into the media,” at-large councilor Jesse Lederman said. Currently the youngest councilor, he observed that he got his start advocating before the Council.

At-large Councilor Kateri Walsh, too, waxed optimistic about the potential to develop leadership.

The measure was not without its critics, but second and final step of the ordinance passed in one 10-0 vote.

The rest of the agenda related to grants. There was another ordinance on the agenda. Allen had sponsored a bill on notice requirements for tax incremental financing (TIF) agreements. TIFs cut property tax bills in exchange for job guarantees. However Allen’s absence, Ward 2 Councilor Michael Fenton moved to table it again until the next meeting.

The Springfield Police Department administers the state-funded Shannon Grant for at risk youth. Efforts within the department, the courts and nonprofits like the YMCA are among those funded by the money. Councilors accepted the $595,000 on a voice vote. However, Councilors Thomas Ashe and Timothy Ryan recorded abstentions because of their relationships with the YMCA. 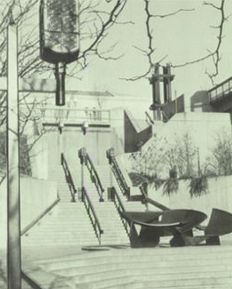 The other grant was a $3.5 million grant from the Massachusetts Executive Office of Economic Development and Housing. The money will fund a renovation of Pynchon Park, the concrete landscape at the end of East Court Street. Set between Chestnut and Dwight Street, its defined by features have been its stairs and abused elevator. The renovation will, among other things, bring the park into compliance with the American with Disabilities Act.

Deputy Director of Economic Development Brian Connors acknowledged his department (and its state analog) do not usually do parks.

“We felt that this was an economic development project because of our growing tourism industry,” he said.

Ward 6 Councilor Ken Shea asked about vandalism, which had bedeviled and doomed the park since its circa 1977 opening. Connors said the planned downtown police kiosk nearby and better coordination with downtown stakeholders would help address those problems.

Responding to Ward 5 Councilor Marcus Williams, Connors said the city did not need to offer a match. However, it was going to pay for design work. The grant passed on a voice vote.

Smaller grants for animal control, fire and library departments passed without any debate.

In the new year, the Council has a quiet January. The timing of inauguration and Martin Luther King Day, occupying what might otherwise be meeting days, are likely why. The fate of the Councilor Allen’s TIF notice ordinance may be an early sign of what lies ahead in 2018. It could pass easily with little mayoral noise—or it could be the starting gun for rollicking year at 36 Court Street.