Analysis: In Response, the Once and Future Kennedys… 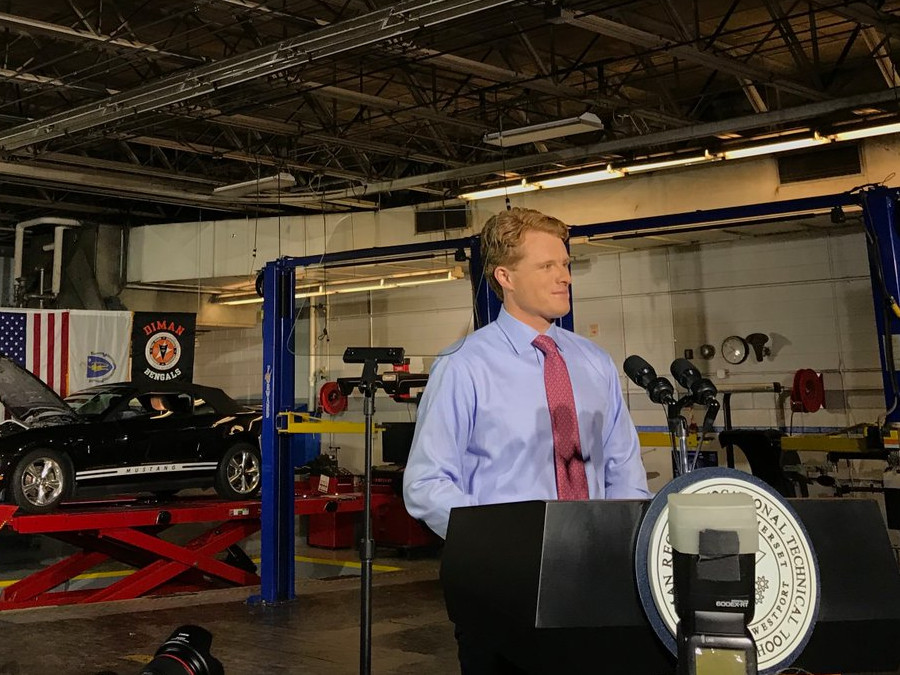 What do ya know, Joe? (via Twitter/@RepJoeKennedy)

Like many responses to a State of the Union, Newton Congressman Joseph Kennedy, III’s reply to Donald Trump Tuesday was not without its quirks. However, for those who could get past the mythical disastrousness of responses, there was a lot going on in Kennedy’s speech. The choice was not without criticism, but that seemed a risk Democrats were willing to take.

A namesake for the Kennedy family’s patriarch, Kennedy set his speech in a trade school in Fall River. It was an appeal to the history and roots of the Democratic Party’s 20th Century rise. And in the person of Congressman Kennedy, Democrats chose a deliberate link to the party’s heyday to bring that legacy forward to the here and now.

“Their record,” Kennedy said of Republicans, “is a rebuke to our highest American ideal, the belief that we are all worthy, that we are all equal, that we all count in the eyes of our law and our leaders, our god, and our government. That is the American promise.”

However well delivered and on message, Democrats faced rebukes. They chose a straight, white, cisgender man to represent a party embracing diversity. That is a fair critique, but, aside from avoiding picking a 2020 contender, there appeared more to this just capitalizing on Kennedy’s boyish good looks.

Some Twitterati could not help but compare Joe Kennedy, 37, to his grandfather, Robert Kennedy. That was likely intentional. While fewer and fewer alive today could have voted for Bobby or John Kennedy, they remain lionized figures in American history. The optimism of the era that largely died with them stirred many to service and higher calling for decades thereafter.

Critics might charge, not disingenuously, that a Kennedy harkens back to the past. Yet Joe Kennedy, drawing on themes from his grandfather and granduncles’ speeches, seemed to try bridging their era with his own.

At the same time, Joe Kennedy spoke about immigrants and transgender citizens in his speech. His State of the Union guest was a transgender servicemember—Trump tried to ban them. 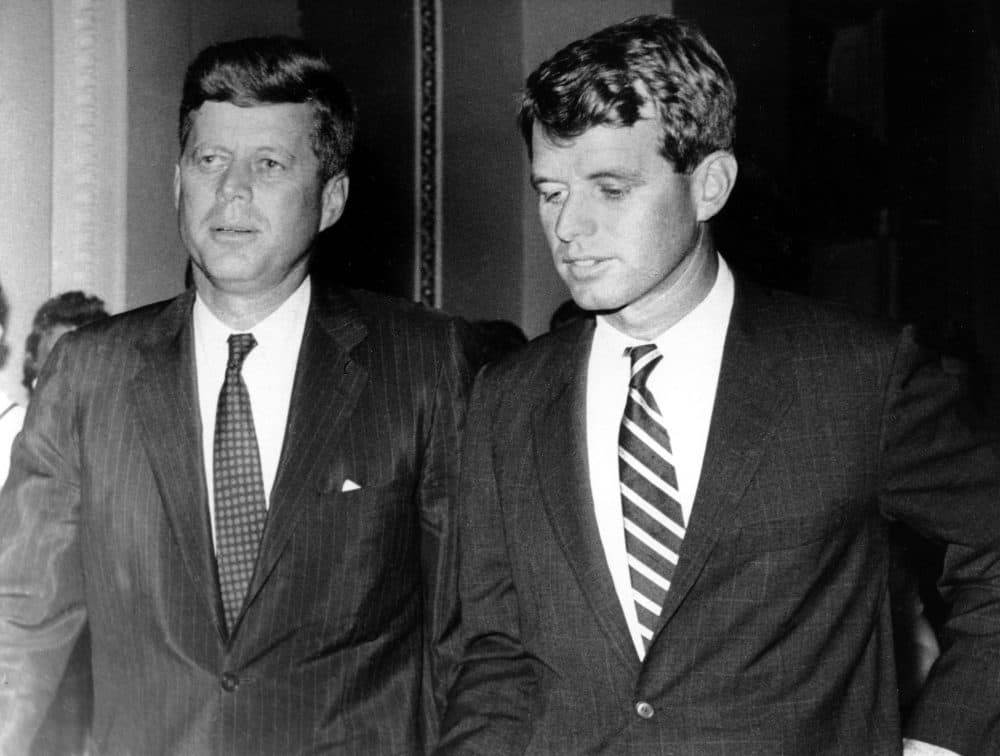 In Massachusetts’s gateway cities like Fall River, there is a gnawing nostalgia for a bygone era. That longing for the past can neglect the gross inequities and outright travesties of the time. Yet that time had undeniable optimism too. That optimism the Kennedys projected, whatever their flaws, helped glue another generation and half of people to the Democratic party through civil unrest, deindustrialization, and naked appeals to racial resentment.

The depths of those challenges were beginning to manifest in the final months of Bobby Kennedy’s life. This June will mark 50 years since his murder. Only months before his own assassination, RFK had calmed nerves in Indianapolis during remarks announcing the death of Martin Luther King, Jr.

But Joe Kennedy was not trying to evoke the past. He was rooted in the present, invoking #MeToo, Black Lives Matter, the Women’s March and the resolve, palpable among younger generations, to tear down the walls Trump builds.

That rhetorical boost in morale, a reminder of the power of movements, evoked his grandfather. In a 1966 speech in South Africa, Bobby Kennedy spoke about apartheid, reassuring his audience their efforts and individual’s efforts matter.

“It is from numberless diverse acts of courage and belief that human history is shaped each time a man stands up for an ideal or acts to improve the lot of others or strikes out against injustice,” then Senator Robert Kennedy said. “He sends forth a tiny ripple of hope” that may “build a current that can sweep down the mightiest wall of oppression and resistance.”

Congressman Kennedy’s offered reassurance, too. It was not an appeal for peace after a horrifying and senseless murder nor resolve before an abomination like apartheid. Still, Joe Kennedy’s words spoke to a nation—or at least 60% of it—“anxious, angry, afraid.”

“Politicians can be cheered for the promises they make. Our country will be judged by the promises we keep,” he said. “That is the measure of our character. That is who we are. Out of many, one.”

Kennedy spoke about America’s commitment to equality, weaving in a defense of American diversity. He excoriated the “zero-sum game” Trump and Republicans have pursued. It pits employed against employed, states against states, the sick against immigrants.

“As if the mechanic in Pittsburgh, a teacher in Tulsa, and day care worker in Birmingham are bitter rivals rather than mutual casualties of a system forcefully rigged towards those at the top. As if the parent who lies awake terrified that their transgender son or daughter will be beaten and bullied at school is any more or less legitimate than a parent whose heart is shattered by a daughter in the grips of an opioid addiction. So here is the answer the Democrats offer tonight. We choose both.” 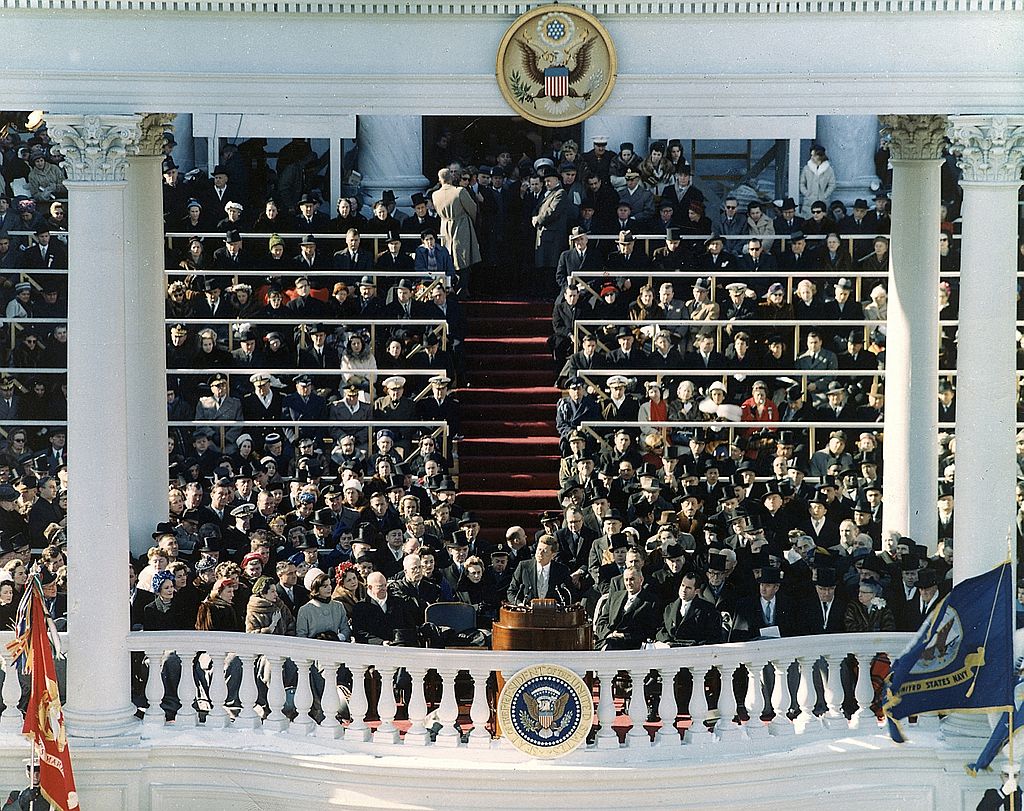 Though he was speaking in an international context, President Kennedy spoke to similar themes. “Man holds in his mortal hands the power to abolish all forms of human poverty and all forms of human life,” the late president said at his inauguration. “United there is little we cannot do in a host of cooperative ventures. Divided there is little we can do,” he continued.

Both then and now, the alternative to working together is failure for the American and human enterprise.

While Edward Kennedy may have become a giant in the Senate, he never had quite the same impact on the national imagination. Chappaquiddick and his primary challenge to Jimmy Carter are likely to blame.

But his impact remains difficult to dispute. Arguably the most liberal of his generation of Kennedys, Senator Kennedy advocated for those from far humbler circumstances than he.

“Instead of shutting down classrooms, let us shut off tax shelters. Instead of cutting out school lunches, let us cut off tax subsidies for expensive business lunches that are nothing more than food stamps for the rich,” Senator Kennedy said at the 1980 Democratic convention. He was riffing on what would become President Ronald Reagan’s tax proposals. 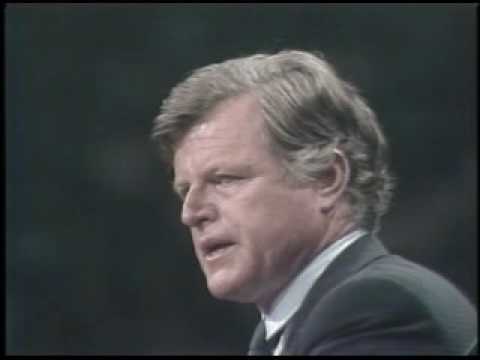 In his own speech, Congressman Joseph Kennedy hammered the policies that only benefit the rich and their bulging stock portfolios. It matches well a shallow president who bullies, self-aggrandizes and obsesses about celebrity.

“For them, dignity isn’t something you’re born with but something you measure,” Joe Kennedy said. “By your net worth, your celebrity, your headlines, your crowd size. Not to mention, the gender of your spouse. The country of your birth. The color of your skin. The God of your prayers.”

Kennedy’s grandfather said something similar in South Africa. “Therefore, the essential humanity of men can be protected and preserved only where government must answer-not just to the wealthy, not just to those of a particular religion, or a particular race, but to all its people,” Bobby Kennedy said.

Only a fool could deny Joe Kennedy harbors higher ambitions. A presidential run in 2020 is unlikely. Though Massachusetts should expect a Kennedy on its statewide ballot someday, it probably will not be for governor. 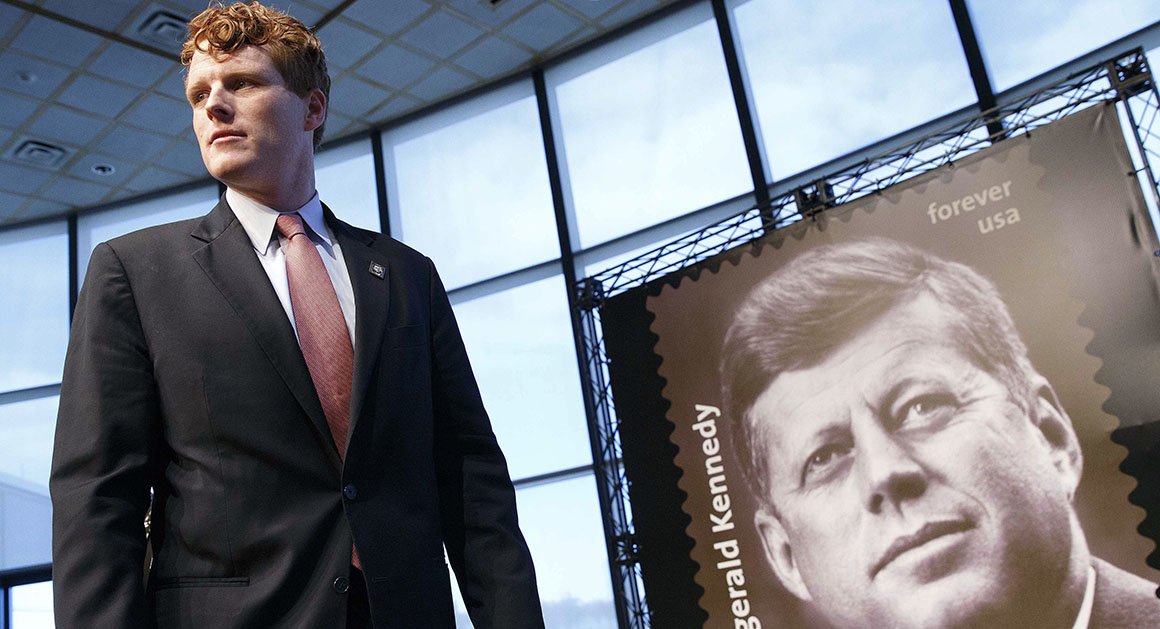 Kennedys move to national stages and with this speech, Joe Kennedy escaped mere legacy. Among Bay State pols, his identity is unique from the fire of Elizabeth Warren—his former law professor—or the wonky mien of Ed Markey. He occupies a space between Deval Patrick’s call to action and Obama’s command of the moment. For a Democratic party that has founded its revivals in charismatic speechmakers, this Kennedy ulimatley echoes his literal forefathers.

However, Joe Kennedy’s rhetorical place or future is not the issue. The next election and the next opportunity to correct course are nine months away. So Kennedy had to plead for Americans that want more than Trump’s confidence game to hang into there.

“Ladies and gentlemen, have faith. Have faith. The state of our union is hopeful. We’re resilient and enduring,” Congressman Kennedy

Senator Edward Kennedy offering like encouragement in 1980, subtly reminded his audience the job is never finished.

“For all those whose cares have been our concern, the work goes on, the cause endures, the hope still lives, and the dream shall never die,” he said.

This response Tuesday was not about one man or yet another Kennedy. The Kennedys, in their day, were flawed leaders. And yet, they did inspire and give hope.

The next generation doesn’t have to be led by Joe Kennedy or any Kennedy for the nation to recapture the values of which Joe Kennedy, his grandfather and his granduncles, spoke. A commitment to common purpose, asking not what your country will do for you—you know, getting yours—but what you will do for your country, is timeless.

Like any good politician Joe Kennedy brought it back to the city he represents, to make a broader point.

“We choose Fall River. We choose the thousands of American communities whose roads aren’t paved with power or privilege but with an honest effort, with good faith and the resolve to build something better for your kids. That, that is our story.”

…If Americans seize this opportunity to remember.