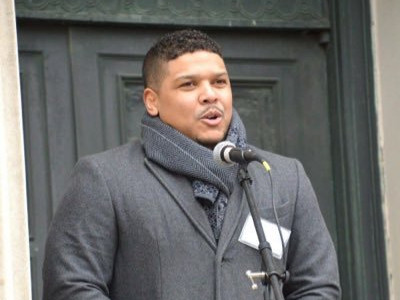 Taking down a sitting state senator will not be easy. Although much of the district is in Springfield, higher turnout elsewhere, particularly West Springfield has favored Welch. That is not discouraging Rivera. He says he will offer a bold vision to counter the Trump agenda on the state level while mustering the support and money needed to compete.

“This isn’t about an incumbent or a former councilor, it’s about putting ourselves on the right foot for the 21st century,” Rivera said.

Among them are Downtown, Hungry Hill, the Hill neighborhoods, McKnight, Maple Heights/Six Corners, the North and South Ends, and parts of East Springfield, Forest Park and Indian Orchard.

Rivera served as the councilor for Ward 6 in 2011, completing Keith Wright’s term following his late 2010 resignation. Despite losing to Wright in 2009, a city charter quirk let Rivera fill the vacancy as the next highest vote-getter. That set the stage for a divisive, though productive tenure. Rivera left the Council after running at-large unsuccessfully in 2011.

For much of the last six years, Rivera has worked for US Senator Ed Markey, starting as a campaign staffer in 2013. After Markey won, Rivera served as constituencies director and state policy director. Interspersed were gigs as housing policy director for the Massachusetts Commission Against Discrimination* and leading a small business initiative at Babson College.

“I think I’ve had not only a lifetime of advocacy, but I’ve worked on the federal level advocating for the entire state and, in particular, Western Mass,” Rivera said in a phone interview.

Many big items passed during Rivera’s year on the Council, often unanimously, despite several rocky moments.

Rivera acknowledged that period was a “tough political time” for him. Still, he observed, “We were able to have an incredible legislative record that made the lives of Springfield residents better.” 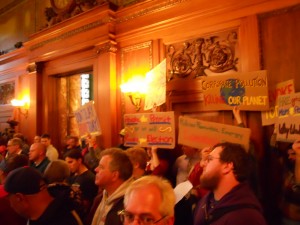 Opponents of biomass in 2011. Though courts technically ruled against the city here, too, the project has yet to recover from the revocation. (WMassP&I)

Rivera contributed pro-labor and pro-immigrant resolutions, revocation of the biomass permit, and ordinances for language access and foreclosure, a pet issue of his. Although courts later ruled state law preempted the ordinance, bills to permit local foreclosure regulation have moved in recent years.

Speaking to disagreements with colleagues, Rivera said, “I have learned to build even better bridges to move our community forward.” Yet, he maintained progress should outweigh pleasing everyone and doing nothing.

Rivera had been considering a bid for months. But while in Markey’s employ, Rivera could not officially campaign leaving a lot of uncertainty in the race. He said he left Markey’s staff last week.

Rivera brushed off the late start. He claimed to have already collected 1000 signatures for the ballot over the weekend. Only 300 are needed for the ballot. Rivera must still open a new campaign account, although he insisted he alrady had fundraising pledges equalling five figures.

For Springfield candidates, the path from the city to… (WMassP&I)

But political handicappers see bigger challenges. Whether one views the race through the lens of geography or race, two Springfield Latinos seem likely to split key voting blocs that might otherwise overcome Welch’s institutional advantages.

Welch last faced a competitive election in 2012, just after redistricting. He faced Springfield Ward 3 Councilor Melvin Edwards. While losing the two-third of Springfield in the district, Welch prevailed by flattening Edwards in West Springfield and the Chicopee precincts.

However, both Gomez and Rivera have observed Edwards suffered a devastating double-knee injury that effectively sidelined his candidacy. But the two will be splitting what potential there is. Welch meanwhile enjoys solid if not monolithic support in Westside after nearly 20 years in politics there.

“I think every vote matters in this race but it doesn’t matter if it is in Chicopee, Springfield or West Springfield,” Rivera said. In other words, winning votes at the margins of his opponents’ bases add up.

…to the State House is narrow. (WMassP&I)

Welch did not immediately respond to a query for comment. When Gomez announced, Welch told The Republican he respected anybody who decides to run for office.

Rivera also noted the region’s willingness to pass on familiar faces. He pointed to Domenic Sarno and Alex Morse, who ousted incumbent mayors in Springfield and Holyoke respectively. Rivera also noted West Springfield elected William Reichelt mayor in 2015 over Rep Michael Finn. Like Welch, Finn, too had a lengthy elected record in Westside.

However, Democratic primaries may be different. No House or Senate district that includes Chicopee, Springfield or West Springfield have turned out a primary incumbent since 2000 absent scandal. That year, now-disgraced ex-Rep Christopher Asselin dispatched incumbent Jack Keough. Asselin later lost renomination in 2004, but only amid a corruption investigation.

Still re-nomination for Welch is not a layup, even with two challengers splitting Springfield. Despite generally poor turnout in elections, Springfield punches above its weight in primaries. Unlike in 2012, statewide primaries, namely for governor, are on the ballot this year. That could goose Springfield turnout, balancing out West Springfield further.

The Hampden Senate primary could come down to the white, principally Irish vote in Springfield. That demographic in the district may look across the river warily and embrace the election of Springfield’s first resident senator in 14 years.