Even as it remains unclear whether a special election will occur or not, contenders to succeed the late Peter Kocot have already lined up. The last 48 hours brought a pair of announcements for the Northampton-anchored 1st Hampshire House seat. Among them are Noho’s City Council president and Kocot’s aide.

Kocot died after a brief illness on February 22, creating the third vacancy among Upper Pioneer Valley seats. While Northampton is not the only community in the 1st Hampshire, it will likely dominate the primary. It is no surprise then a city political figure, like at-large Councilor Ryan O’Donnell threw his hat into the ring with a Monday morning Facebook post.

“Rep. Kocot cannot be replaced, and more to the point, none of us have any desire to replace him. I don’t think there will ever be a time that feels exactly right to discuss the practical realities that now face us,” O’Donnell said on Facebook. “I do, however, firmly believe we need to keep fighting.”

O’Donnell is not alone, however. On Sunday, Diana Szynal, who served as Kocot’s district director, jumped into the race according to The Daily Hampshire Gazette.

“I know the district like the back of my hand, and I know the people and the communities,” she told the paper. “My strengths have always been constituent services and my grasp of municipal issues and procedures,” the Hatfield resident added. 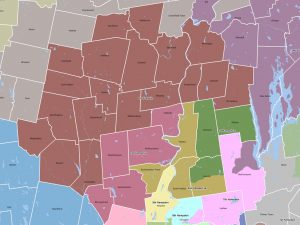 Upper Valley House seats. The 1st Hampshire is in fuscia Click for larger image (via malegislature.gov)

The race has developed quickly. O’Donnell has already repurposed his city campaign committee—and its $1604 as of December 31—for state campaign use. Szynal has not yet filed with the Massachusetts Office of Campaign and Police Finance.

Though O’Donnell attended the Western Massachusetts Young Democrats kickoff on Sunday, he did not speak as a candidate. By comparison the entire field of 1st Franklin Democratic candidates did speak as did others running in races from Springfield to Easthampton and Amherst. Szynal did not speak either. WMassP&I could not immediately confirm her attendance.

At this very early stage the advantage may be O’Donnell’s. His meteoric rise from ward to at-large councilor to president made him an obvious candidate in the wake of Kocot’s passing.

Northampton’s urban roots could seed the race with more intrigue. Though smaller than Amherst, Noho’s long history as a city mirrors the industrial cities downriver. With that comes the potential for the rough and tumble of coalition building, factionalism and arm-twisting.

At the same time, the prominence of Northampton in the district means O’Donnell may not be the only city candidates to emerge. A similar dynamic played out in 2016 where the open 3rd Hampshire race was dominated by Amherst candidates. By comparison, no one community stands out among the others in retiring Reps Stephen Kulik or John Scibak’s seats.

It’s not clear yet who else could materialize from Paradise City. However, if others step up, Northampton could fracture in the primary, leaving a clear path for someone like Szynal. That and ties to the late rep could be more than enough to win a crowded primary.

This story is developing.