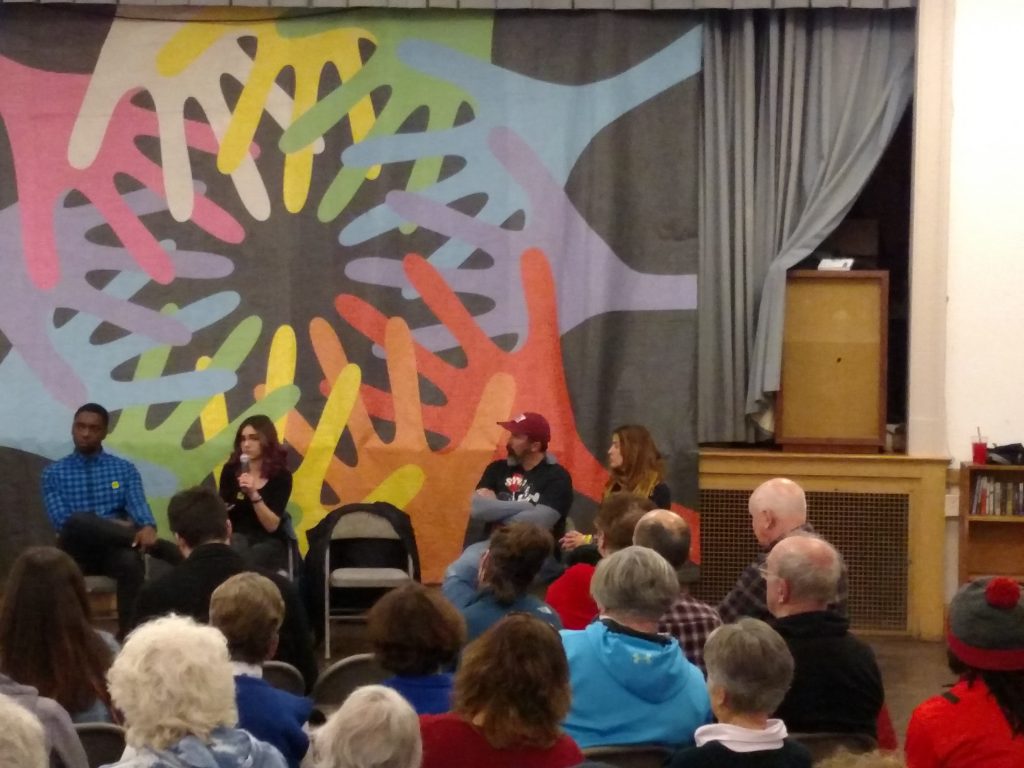 From left, Trevaughn Smith, Sarah Reyes, and Manuel and Patricia Oliver at South Congregational Church Friday. The Olivers’ son Joaquin was among the victims at the Parkland shooting. (WMassP&I)

SPRINGFIELD—History is not without a sense of irony.

Two hundred plus years ago, George Washington sited the national armory here, spurring a weapons industry. Today, though much retrenched, gunmaker still employ hundreds. But Springfield-made firearms are not just mowing down Redcoats, Confederates, Imperial and Nazi Germany’s soldiers, or al-Qaeda. They are being turned on Americans in schools like Marjorie Stoneman Douglas High in Parkland.

Into this context Manuel and Patricia Oliver joined local student gun control activists at a forum at South Congregational Church. Their son, Joaquin, died in his Parkland, Florida high school on February 14. The shooter used a weapon manufactured here.

On Friday, Manuel Oliver unveiled a Parkland-related art exhibit, one of 17 around the nation. Each represents a victim at MSD High. An artist and photographer, Oliver now describes himself as a “graphic activist.” Both he and Patricia, originally from Venezuela, are now traveling the country in effort to change the culture around guns.

“I only turned activist because I lost my son,” Manuel Oliver said Friday at the forum. 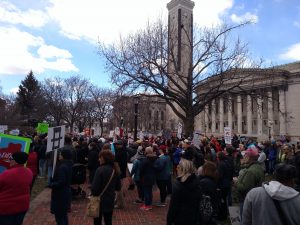 The Springfield March for Our Lives March 24 at Court Square. (WMassP&I)

The event echoed themes Parkland students have broadcast since the shooting and during the March 24 Marches for Our Lives. Yet as Springfield plays home to Smith & Wesson, now publicly traded as American Outdoor Brands, area students have sought meetings with the gunmaker’s leadership. They made clear they want to work with the company to figure out how ways to keep guns out of dangerous hands.

Reyes noted Smith & Wesson is likely skittish about straying from National Rifle Association dogma. Smith & Wesson once agreed to develop smart gun technology, but there was a massive backlash from the NRA and the most zealous gunowners. When Smith & Wesson was later sold, the new owner disowned the plan.

The students approach reflects a sensitivity to the gunmaker’s role as an employer. Indeed, even Joaquin Oliver’s parents, in the city where the Parkland shooter’s AR-15 was made, urged compromise. Patricia Oliver explicitly urged both sides to go to the “middle” on guns, which is well away from the near-maximalist position of gun rights activists.

The invocation of the NRA also prompted points about the industry lobby that masquerades as a gunowner-advocacy group.

A memorial to Joaquin in the Oliver home in Coral Springs, Florida (via Miami Herald)

“They are valuing that money over the lives of people like Joaquin Oliver,” Reyes said of the NRA.

The NRA and other gun advocates—ammosexuals, specifically, to be pejorative, if not wholly unfair—have found countering the Parkland students and their peers nationwide difficult. Petty insults have led to advertiser boycotts while teenaged activists have ably turned other attacks around on social media.

“As a response, all I have to say is I turn 18 in a couple of weeks,” Smith said regarding attacks back on his and peer’s youth. “It just seems childish in my opinion.”

Manuel Oliver spoke of the need to cross a barrier on the issue of guns not unlike his wife’s point about the middle. He never advocated for something as dramatic a Second Amendment repeal. Yet, Oliver did seem to hit on the national miasma that fuels gun ownership.

Verging into the philosophical, he noted that some think something “requires you to carry a gun so you can feel free.” People who think that have no idea what freedom is, he argued. That, in turn, undercuts the nation’s ability to sell itself as a model to the world.

If we still think of ourselves as a first world nation under such conditions, Oliver continued, “We’re either lying to everybody or we’re lying to ourselves.”