With Rail Study Lurching Forward, Thoughts of Lesser’s Next Stop…

UPDATED 8:22PM: For clarity and accuracy. 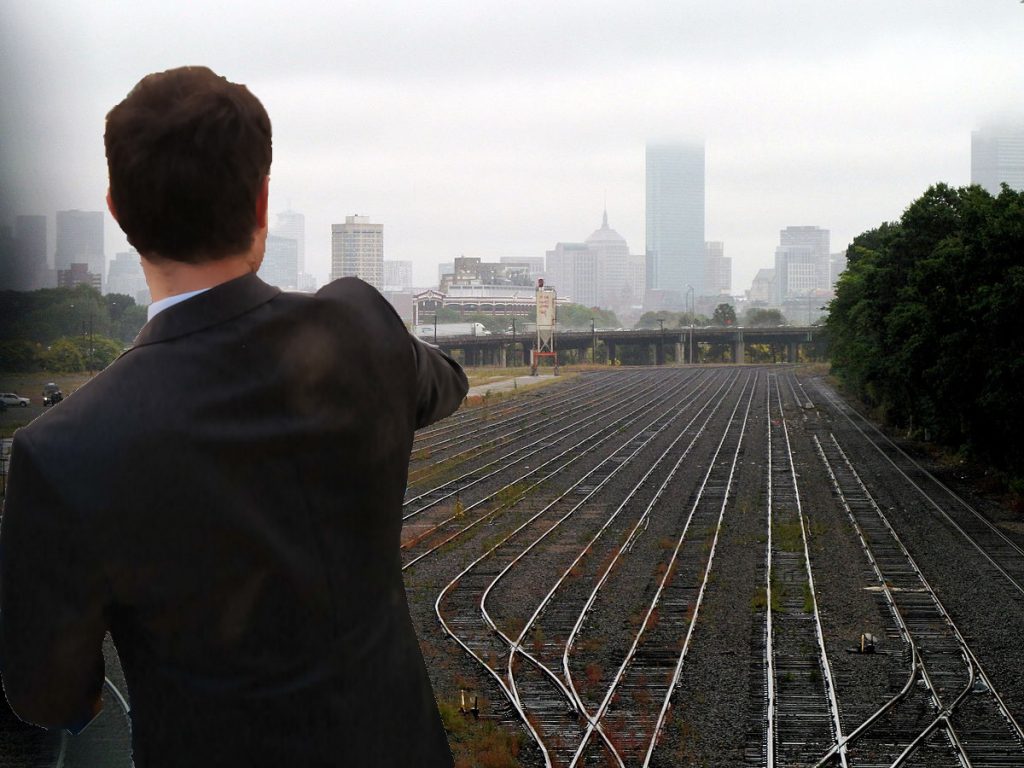 Where to now? (created via WMassP&I and wikipedia images)

EAST LONGMEADOW—Four years ago, Eric Lesser drilled his campaign down to a few simple themes. Yet the one that came to define his political identity was rail. It remained so even though efforts to secure a comprehensive study on the service ran aground Beacon Hill politics.

The Massachusetts Department of Transportation’s decision to add a study of east-west rail to the state rail plan represented a tremendous shift. Tangible progress is still years off and Governor Charlie Baker’s administration is hardly enthusiastic. But with Lesser’s marquee chugging forward, hopes are high more transformative action lies ahead.

Just getting the study was not easy. Baker had vetoed it in 2016. The following year, the study got stripped out of the budget in the House-Senate compromise budget. Even now, this is only beginning

“This is like the starting gun going off for a long marathon,” Lesser said.

From his earliest stump speeches Lesser has invoked the opportunities available to his Baby Boomer parents that led them from New York’s public housing and cramped apartments to tony Longmeadow. Like the referendum to save teachers’ jobs 15 years ago, Lesser sees his agenda in terms of allowing people to reach their potential.

The Lake Shore Limited, pictured here in Boston, is the only rail connection between Western Mass & its capital. (via wikipedia)

“I view the lack of adequate transportation and the shunning of East-West rail discussions as a form of economic injustice toward the people of Western Mass,” he said.

In an interview at his district office here a few weeks after MassDOT announced its rail study, Lesser acknowledged service is almost certainly years off. However, it opens the door to taking other steps that were not possible before, like contemplating funding sources.

“One of those things that when I was advocating for rail back in 2006, anytime I’d be talking to people about north-south, people would say that good but what about going to Boston,” said Rebecca Townsend a member of Trains in the Valley, a pro-rail group.

However, there was some rhetorical differences between Lesser’s campaign platform and what the planning and rail advocacy community had been pushing. Lesser has called for “high-speed” rail while others were using terms that reflect the simpler upgrades discussed in the Northern New England Intercity Rail Initiative (NNEIRI) study. 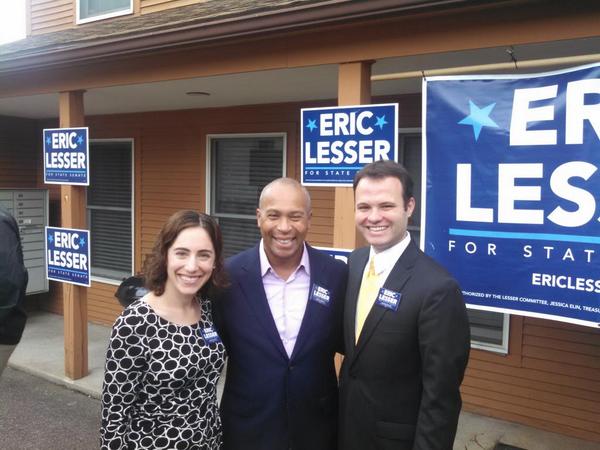 When Lesser was first running, many thought there was a good chance a Democrat would win and carry on the pro-rail policies of Deval Patrick, pictured here with Lesser and his wife Alison Silber in 2014. (WMassP&I)

Former governor Deval Patrick had advanced rail projects along the East-West and North-South axes. When a Democratic successor to him seemed possible, the rhetorical differnces surrounding East-West rail seemed academic.

Baker’s election derailed that notion. The clashing rhetoric and strategy, if not the substantive goals, allowed the Republican administration to dawdle. That alleged lack of consensus creeped into MassDOT’s talking points on the issue.

Differences aside, rail advocates agree the Longmeadow Democrat’s public campaign put pressure on the administration and engaged the public. Townsend, who studies public engagement processes, pointed to the bus Lesser chartered to bring constituents to testify on Beacon Hill.

“I’ve seen him make a genuine effort to make people’s voices heard,” she said. Indeed, Townsend herself was among those who traveled to Boston last October to testify in favor of Lesser’s rail study.

However, these ballsy moves also stoke speculation about Lesser’s endgame. The commentariat from Springfield to Boston to Washington muse about what Leesser’s political future holds.

Electorally, he is as solid as ever. In 2016, he even won East Longmeadow. It was the first time a Democratic state senate candidate did that since the year Lesser turned one. Yet he dismisses talk about his next political step. 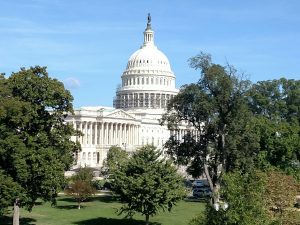 Not on the Lesser itinerary…so far. (WMassP&I)

“I honestly don’t think about it very much. I’m not focused on that,” he said. “I view my role as giving voice to a community.”

Realistically, there are no obvious paths to higher office. Should Democrats take the House, US Rep Richard Neal would become chairman of Ways & Means, not plan for retirement.

At the time of the interview, Lesser had telegraphed interest in a bid for Senate president. But he emphasized he was only considering it. Lesser ultimately backed Ashland Democrat Karen Spilka.

Rather, with Donald Trump in Washington, Lesser said reforms and change was going to be coming from the states.

“At our best, we’re a beacon for the rest of the country about our values and where we want our country going,” Lesser said. Among examples he cited were abolitionism, progressive-era trust-busting, and marriage equality.

In Washington, by contrast, Lesser said “everything is an abstract cable news show.” On the state and local level, people won’t tolerate point-scoring when issues like health and education are at stake.

“I’m a part of the community I serve. The role is very real and very immediate,” he said.

But that doesn’t mean Lesser is ignoring the national implications. He said federal rollbacks of net neutrality and student loan protections gave states an opportunity to fight back. 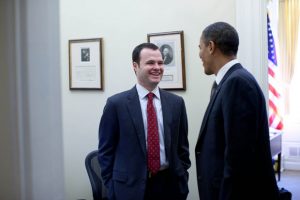 As a veteran of Obamaworld, he also plays a mentoring role for Democrats his age who are entering politics themselves.

“I think Eric was one of the first who had worked closely for the president and the White House who came home and ran for office,” Josh Lipsky a friend and fellow former Obama campaign and White House staffer said of Lesser.

Greater Springfield mirrors many places they had visited as Obama staffers in 2008. Strengthening and reviving these communities were a key concern then and remain a vexing problem for policymakers.

“You have to find a way to build an economy and community where the children of the community still have the opportunity and ability to stay there and live there,” Lipsky said.

Rail, and its capacity to connect stronger economies with other regions, was one such answer the Obama administration had considered.

In Massachusetts, the Baker administration is not anti-rail, but it is cool to East-West proposals. Advocates see the study as a positive development. However, there are fears MassDOT could exploit rhetorical divisions and study only something grandiose. A true “high-speed” bullet train would require expensive land takings and new infrastructure.

Planning entities from the Pioneer Valley Planning Commission to groups like Trains in the Valley are eyeing upgrades to the existing state and CSX-owned line between Boston and Springfield.

Baker has done little to allay concerns. Speaking to The Republican editorial board, he suggested a whole new line would be necessary for East-West rail service. Some rail advocates think he meant adding a second track—CSX’s predecessor single-tracked the Springfield to Worcester track in the 1980’s. Still, it was worrisome.

MassDOT did not offer comment as of posting time.

The department’s intentions may begin to become clear as the public participation process begins. How broadly it casts its outreach net will be a signal, Townsend said

“If MassDOT engages in a shallow public engagement process”—by studying a Cadillac instead of something affordable—”they will be wasting taxpayer dollars,” she explained.

Sure, it’d be great, but not realistic and rail advocates know it. (via wikipedia)

“Few are arguing that we need a Japanese-style high-speed” system, she added.

Of the obstacles between the present and future rail service, the direction and pace of the study may prove to be the most consequential aside from securing funding. If too much time passes, the useful findings in the NNEIRI study could be stale and unusable in grant applications.

Lesser said he had received encouraging signs from MassDOT, adding residents would not accept a sham study.

“The public is not going to tolerate that if they try to do that,” he said. “We have an obligation to hold their feet to the fire.”

He noted he could still press for his legislation if the study gets off track.

Prior to 2014, Lesser said he had “abstractly” thought about running for office. Now, even as he denies looking beyond the state senate, the outcome of his rail efforts could define his political future. Still, he resists that framaing.

“At the end of the day I’m one person. What we have with us is a huge coalition,” he said of rail.

Sketching out the journey from here. (created via wikipedia & Lesser campaign images)

That mindset that could comport with the national context Lesser mention when he discussing his legislative work in Boston. Back in 2014, rivals knocked Lesser for his ties to a political universe larger than the Pioneer Valley.

Now in the Trump era, work on the local level may be what Lesser brings back to that wider now post-Obama universe. Indeed, friends like Lipsky point to Lesser’s time in office as proof that “change starts in your community.”

“Eric showed many people in the Obamaworld that this was possible,” Lipsky said, “and it was part of what we worked for.”