SPRINGFIELD—A bevy of ordinances and several financial items greeted the City Council Monday night. The broad range of the policies under consideration ranged from rules for signs to outdoor dining. The Council also sought to leverage Springfield tax incremental financing (TIF) programs to ensure tax breaks do not go to wage and hour scofflaws.

At the same time, the meaty agenda moved furtively. Some delay and committee referrals are dilatory and annoying. Others reflect councilors’ sincere desire to better understand programs before them. One such item was the annual Chapter 90 road moneys, whose holdup apparently had gastroenterological consequences in the mayor’s office.

Although the Council did not grant first step, councilors welcomed the TIF ordinance. A squad of carpenters attended to support ordinance. Ward 8 Councilor Orlando Ramos, a former carpenter himself, Ramos, ceded the podium to speak on the bill.

It would require future TIF’s to include contractual language restating the obligation to follow minimum wage, prevailing wage, worker safety, and work classification laws, among others. Once part of the TIF agreement, the city could claw back the benefits should the recipient flout these laws later.

“They’re using our tax dollars to cheat,” Ramos said of TIF beneficiaries who pocket the tax savings and stiff workers. The Council referred the item to committee for fine-tuning.

The Council accepted Comptroller the revenue and expenditure report and petitions for utility work. Also gaining approval were grants for the Elder Affairs, Fire, Library, and Elder Affairs departments as well as the area’s bikeshare program.

The Council was asked to approve a memorandum of understanding (MOU) with the Springfield Redevelopment Authority (SRA). In the MOU, the city agrees, subject to Council approval, to act to enforce the host community agreement (HCA) should MGM not deliver payments promised to the SRA. Under the HCA, the gaming behemoth agreed to pay $500,000 annual to the SRA in lieu of renting space at Union Station. 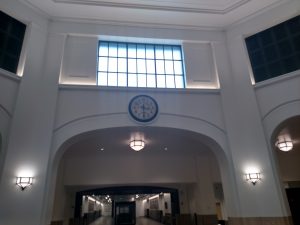 The SRA is seeking a $2.7 million loan from Mass Development to finance work to make Union Station’s office usable for tenants. SRA Counsel Thomas Moore explained normally the SRA would seek a loan, but that is impossible because Union Station cannot be used as collateral. The MGM payments can, but the SRA lacks standing to sue for enforcement of the HCA. Enter the City of Springfield, which has legal rights under the HCA. The MOU only really recognizes this situation, as the city could, in theory, decline to enforce the HCA on the SRA’s behalf.

Nonetheless, the item prompted a wave of questions about whether and what the Council would be getting the city into. That segued into talk about the much-delayed high-level platform, the most prominent unfinished feature of Union Station.

A committee vote on the MOU failed 5-6. Councilors Ramos, Michael Fenton, Justin Hurst, Jesse Lederman and E. Henry Twiggs supported the move. The vote for final passage was 7-4 with Fenton, Hurst, Ramos and Twiggs in dissent.

A $145,606 payment to correct Union Station’s deficit could not avoid committee.

“I really thought that Union Station was all set,” at-large Councilor Kateri Walsh said. She asked if other projects would be disrupted because of the need to appropriate those funds. Chief Administrative & Financial Officer Timothy Plante said because the funds were coming from free cash, the answer was no.

Springfield officials said Union Station’s deficit is partly driven by low rents to attract tenants. The building was said to be 71% occupied. 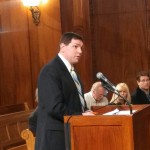 Even if fully occupied deficit are likely. Union Station will need another $1.2 million in the new budget that begins July 1.

Plante said he welcomed a broader conversation about the subsidies for Union Station. While he encouraged approval of the $145,000 for this year’s deficit, Plante did not object to committee review.

Also sent to committee was Springfield’s annual chunk of the Chapter 90 highway disbursement from the commonwealth. Each year, all 351 Massachusetts communities receive funds for road projects.

Ward 7 Councilor Timothy Allen made the motion after noting questions about utilities tearing up recently paved streets and which street were on the paving list.

At-large Councilor Timothy Ryan asked the Public Works official on hand if the delay would be a problem.  The department’s representative did not object to a delay until the regular Council meeting next Monday.

Little did anybody realize the move would prompt a complete failure of the mayoral sphincter. 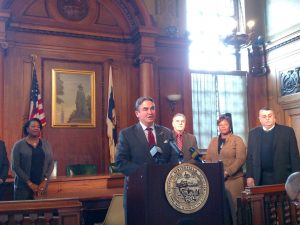 The Mayor letting loose under much different circumstances. (WMassP&I)

“This has always been a routine acceptance and not only could this jeopardize this funding, but just as important, delay and/or postpone any neighborhood street repaving,” Mayor Domenic Sarno discharged in a Tuesday press release. He went on to note Chapter 90 “has been on the books for decades” and has funded millions of projects.

It is not clear how Springfield could lose the money. Chapter 90 is essentially an entitlement program for municipalities, based on a formula. The award letter from Gov. Charlie Baker did not specify a deadline either.

Councilors defended the move to committee as due diligence. Speaking to The Republican, Ramos noted that the delay would only be a week. The Council has not referred Chapter 90 to committee in recent years. However, referrals for other annual grant programs is common, especially when councilors have questions about how it is spent.

Elsewhere, councilors approved a $328,768 transfer from free cash to clear the snow removal deficits. Plante said the city spent $1.9 million clearing snow during the past winter. Another $75,000 was transferred to parks to maintain terraces.

The Council allowed a waiver to the city’s demolition-delay ordinance for a structure in the way of the Six Corners reconstruction project. The Springfield Historical Commission had already declared the building not historically significant.

Parking changes on High and Pine streets passed on a voice votes.

The Council then returned to ordinances. One reappearing for second and third step was a crackdown on the proliferation of commercial signs appearing on telephone poles and municipal property. At Hurst’s suggestion, the lead sponsor, Fenton moved to exclude tag sales and non-commercial signs (i.e. lost dog) from the ordinance. Walsh was the only councilor to oppose the amendment, perhaps not realizing the new language would exempt children seeking lost pets. 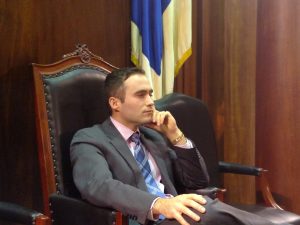 Still more rigmarole ensued. Councilors debated whether the fee was too steep or would harm residents. Including Fenton’s, there were at least three amendments from the floor.

A somewhat flustered Fenton noted the target was pervasive advertisements of bulk homebuyers, diabetic testing strip purveyors, and mattress sales. Many signs appear so high up, a cherry picker is necessary to remove their unsightliness.

“There is a room at the East Springfield Neighborhood Council filled with these signs,” he said.

The Council settled on escalating fines of $150, $250 and $300 per offense, which would likely mean per sign. That amendment passed 7-4 with Councilors Ramos, Twiggs, Melvin Edwards and Marcus Williams in dissent. The final vote on the ordinance was 10-1 with only Councilor Edwards in dissent.

Another glacially paced item was the outdoor seating ordinance. The new bill establishes a process for outdoor seating permits and fees. A business wishing to use city sidewalks must pay a $75 application fee plus an annual $200 fee. Councilor Lederman offered an amendment, adopted by voice vote, to make clear the application must go to other reviewing agencies before the DPW granted approval.

There were other concerns, too, leading Councilor Ryan to move for a committee referral. He ultimately withdrew that, allowing first step approval.

The Council eventually allowed first step to another ordinance banning the burning of construction waste. The fines, which run into the tens of thousands of dollars, are consistent with Massachusetts law. Indeed, the entire structure of the ordinance is based on state legislation.

From there the meeting wound down. The Council opted not to raise the district fire chief’s contract or other items still in committee.

Monday night’s meeting reflected a recent uptick in legislation for the Council. The volume of items partly represented backup from the time passed since the last meeting. But practically speaking, it also reflects an interest and willingness on the part of the Council—and event some city agencies—to effect policy through legislation.

That also means sharing power, which as Sarno’s fit over Chapter 90 shows, is not always welcome.