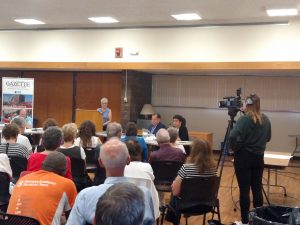 Now this is the be all & end of the 3rd Hampshire. (WMassP&I)

Solomon Goldstein-Rose, the 3rd Hampshire state representive who left the Democratic party earlier this year, has ended his his for reelection as an unenrolled candidate. This leaves the ongoing race for the Democratic nomination as essentially tantamount to election.

But Goldstein-Rose didnt just drop out. He endorsed Mindy Domb, the executive director of the Amherst Survival, in the primary. With no general election on the horizon, Goldstein-Rose’s departure leaves a new race

Goldstein-Rose’s decision to leave the Democratic party was greeted with confusion in and around Amherst, the heart of the third district.

News of Goldstein-Rose dropping out of the race was first reported by The Daily Hampshire Gazette. He said he planned to pursue work in federal energy issues.

This is a breaking story & will be updated as information becomes available.