For Domb, a Career Could Come Full Circle in 3rd Hampshire… 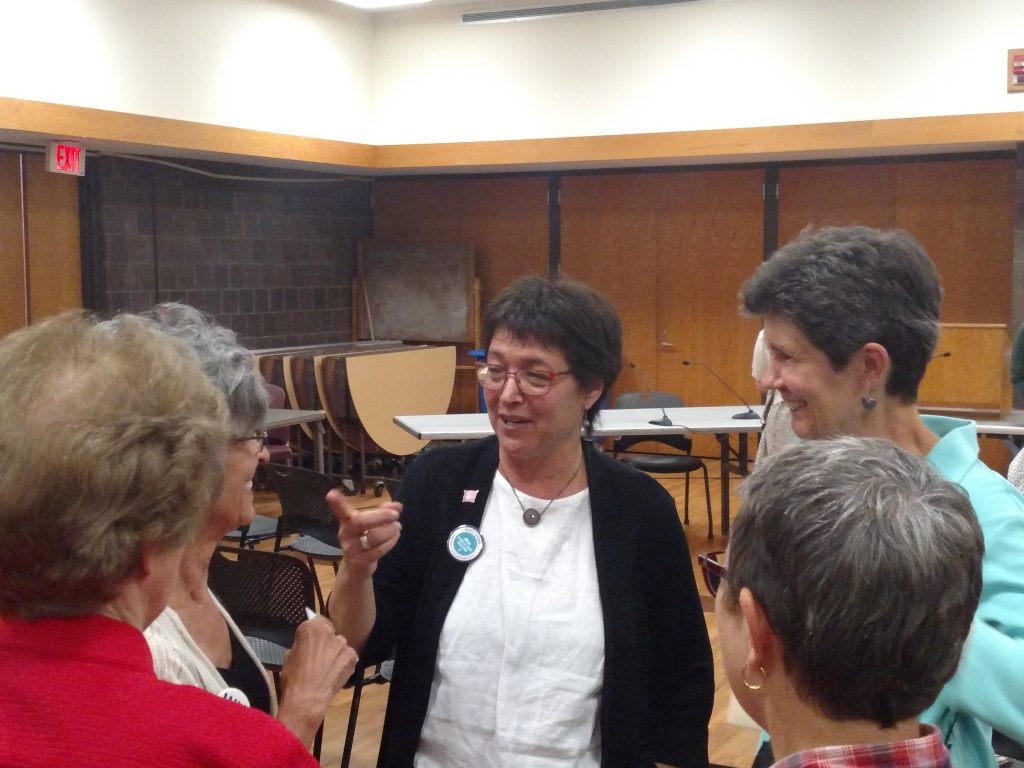 Mindy Domb chatting with people after a recent debate. (WMassP&I)

AMHERST—Two years ago, Ellen Story’s retirement from the 3rd Hampshire House district seat, let loose a flood of candidates.  Mindy Domb, the Director of the Amherst Survival Center, a nonprofit here that caters to people’s food, clothing and healthcare needs, was not among them. The center had just adopted a strategic plan and she wanted to see it through.

That changed this year when Solomon Goldstein-Rose, who won the seat in 2016, left the Democratic party. Domb began receiving calls for her to run. Goldstein-Rose’s predecessor, Ellen Story, had been among those urging Domb to run in 2016.

“‘Oh thank you Ellen, but no,’” Story recalled Domb saying in 2016. Story and others had to lobby Domb to run again, but she got in.

After Goldstein-Rose became an independent, Domb began thinking what she wanted in a state rep: advocacy and persistence. “Then I started thinking that sounds a lot like me,” she said. 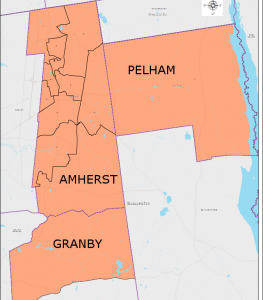 The race changed dramatically again when Goldstein-Rose bowed out entirely and endorsed Domb. She still faced Amherst School Committee member Eric Nakajima in the primary though. Having placed second in the primary two years ago, he is a formidable foe during a wild Upper Valley primary season.

The 3rd Hampshire consists of Amherst, Pelham, and a precinct in Granby.

Domb’s decision to enter electoral politics at 59 surprised some, like Jim Gottlieb, who has known her for years. Gottlieb had been an administrative assistant and chief of staff to Ted Weiss, a New York City Congressman for whom Domb also worked.

“I don’t know why she’s decided to get involved in state politics, but I have an incredible opinion of her,” Gottlieb said. After 40 years in Washington he hadn’t “met somebody better prepared to be an elected official than Mindy Domb.”

During an interview at a café in downtown Amherst, Domb, a New Jersey native, traced her start from New York’s bare-knuckle political scene to a career in AIDS detection, care and prevention. With her short hair and red-framed glasses, she projected the relaxed mien of a friend’s cool mom.

While finishing up Barnard College, she had been angling for a congressional internship. When she got Weiss’s offer, she knew nothing about him.

US Rep. Ted Weiss in an undated photo. (via Wikipedia)

“This person could be the total opposite of my politics,” she remembered worrying. In both her worldview and perspective on college life, she was quite open-minded.

In fact, Weiss, who served from 1977 until his death in 1992, was a noted progressive champion. She had gone to political heaven.

In 1982 redistricting had pushed Weiss’s Upper West Side district into Greenwich Village. Domb, by then a staffer, was to open his new downtown office. Her responsibilities ranged from constituent casework to representing Weiss at events.

Domb and Weiss arrived in the Village, the center of Manhattan gay community then, just as the AIDS crisis detonated. A lack of understanding spread fear and inhibited efforts to treat and control the disease. Weiss sat on committees that oversaw the Centers for Disease Control and other agencies, slow to respond during the Reagan administration.

“Initially we had issues of just insurance covering it,” Gottlieb recalled. Then came reports of mistreatment in hospital and denying partners hospital visits.

Gottlieb noted that Domb’s casework would inform AIDS-related legislation Weiss pushed throughout the 1980s. “Mindy was intimately involved in that,” Gottlieb added. Though passed after Domb left Weiss’s office, that work culminated in the Ryan White CARE Act in 1990.

“For me,” Domb said, reflecting on how AIDS patients were ignored or deliberate pushed away from care, “being involved in the epidemic is about how we take care of each other.”

Domb and her family later moved to Western Massachusetts where she continued her AIDS work. In Pittsfield, she helped found the Berkshire AIDS coalition. Emily Fox, who worked with and under Domb at one point, said it was essential for the region to quality for federal funds to battle the disease.

Fox also noted that Domb was adept at explaining the science of the disease to tough audiences like jail populations, where people were close to together. HIV, a blood-borne disease, cannot spread through casual contact.

She “translated [the details] into a language a non-scientific person could understand,” Fox said.

Domb continued working with at-risk populations until 2013 when she took over the Amherst Survival Center.

“There’s nobody with her kind of background” in the legislature, Story said. She added she thought Domb would fit in well on Beacon Hill and could “end up being a power in the House of Representatives.”

This background has become essential to Domb’s campaign. The 3rd Hampshire has become a contest of experience for Domb and Nakajima, who has his own track record in economic development. With the primary now tantamount to election, voters may scrutinize the candidates resumes even more.

“I have an orientation that is different,” she said. It assesses whether policies are working as intended, she continued. In Weiss’s office, for example, that meant drawing from the expertise of constituents’ experience themselves while appreciating progress can be incremental. It may a bit more access to disease testing or a new bus stop outside the Survival Center.

Those interviewed for this article stressed coalition-building as one of Domb’s skills, a prerequisite for success on Beacon Hill. She has said she is already talking to her prospective colleagues in neighboring contests.

“I like to look, listen and engage with new people,” Domb said. “That’s how I anticipate spending the first couple of weeks” in Boston.

On the trail, Domb has discussed issues from transit to healthcare to education—including town & gown issues in Amherst. Both she and Nakajima support single payer and free college to some degree. 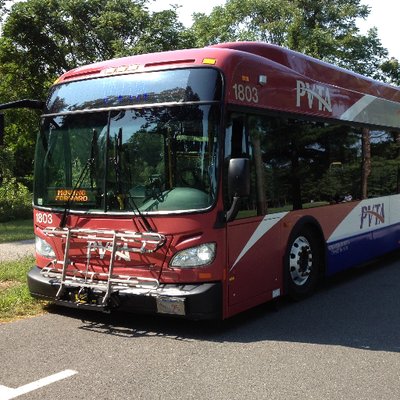 Transit cuts have hovered over the Pioneer Valley for the last several years. (via Twitter/@PVTA)

For example, transit cuts and unreliable buses prevent people in all three communities from being productive members of the community. Meanwhile, the governor was vetoing changes to the welfare cap, justified by slanderous stereotypes about the working poor.

Inarguably, the district’s most significant employer is UMass-Amherst.  However, there are still large gaps in the economy. Domb discussed economic diversification including greater emphasis on agriculture, environmental stewardship, and promotion of the arts and tourism.

“I grew up with ‘I love New York.’ That’s what we need,” Domb said referring to the Empire State’s T-shirt ready tourism slogan.

At the heart of the economic issues, however is inequality. Domb observed that a recent study tied the decline of unions to rising inequality. It may only get worse.

A recent Supreme Court decision could hobble public sector unions. It effectively legalizes theft of services as unions usually must bargain on behalf of all covered employees, even if they don’t pay dues. Domb has encountered people on the trail worried about the impact.

“We have to do a better job of educating about the benefit of unions,” to blunt the impact of the ruling Domb said.

Still, Domb has to win first. In recent weeks, her campaign has collected endorsements from local pols, the Massachusetts Teachers Association, MassEquality, The Daily Hampshire Gazette, and, making a rare step into a local race, Attorney General Maura Healey.

“Having worked with Mindy for many years, I know she will be a great advocate for her district and a leader in bringing people’s opportunities and challenges to the legislative process,” Healey said in a statement Domb’s campaign released. Healey added Domb would be a strong partner in the legislature.

“That’s an extraordinary feeling,” she said, flattered by Healey’s recognition.

With women potentially filling out all of Hampshire County’s State House delegation amid national threats to women’s rights, Domb appreciates the gravity of the moment.

Yet, Domb emphasizes the race as being about qualifications.

Though she has a substantial agenda, she kept returning to the importance of the official-constituent relationship. “The bedrock of our democracy,” she called it.

“Part of the state rep’s job is making sure neither people nor their concerns are invisible,” Domb said.