Upper House, Upper Valley: Comerford’s Break on through to the Inside?…

Upper House, Upper Valley is a series on the candidates for the Hampshire, Franklin, Worcester Senate Democratic primary on September 4. 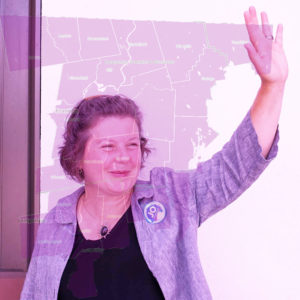 Jo Comerford has attracted a big following as a first-time (and write-in) candidate. (via malegislature.gov & Facebook/Comerford campaign)

NORTHAMPTON—Growing up, dinnertime conversations about democracy, the role of government and the good they can do were not unusual for Jo Comerford.  The daughter of public school teachers and active Democrats, she experienced some of the impact first hand. One day she might have a part in the process, too, perhaps in office.

Yet, Comerford’s role up to now has been on the outside, first as a social worker and later as an advocate for policy and people.  She was holding governments accountable rather than serving in them. Then her Senate seat became available. Comerford had that opportunity herself to push government toward the positive image of government depicted at the kitchen table.

“I believe that government can be a force for good,” she said. In the era of Donald Trump, especially, state governments must “keep the lights on in democracy,” Comerford added.

Running for office may be a logical step, but Comerford’s first bid has a handicap. She and two others, Ryan O’Donnell, and Steven Conner, are running as write-ins. Chelsea Kline is the only person on the ballot.

The district includes Amherst, Hadley, Hatfield, Northampton, Pelham and South Hadley in Hampshire County, Franklin County east of and including Colrain, Deerfield, Greenfield and Whatley, and Royalston in Worcester County. The primary, open to Democrats and unenrolled voters, is September 4. 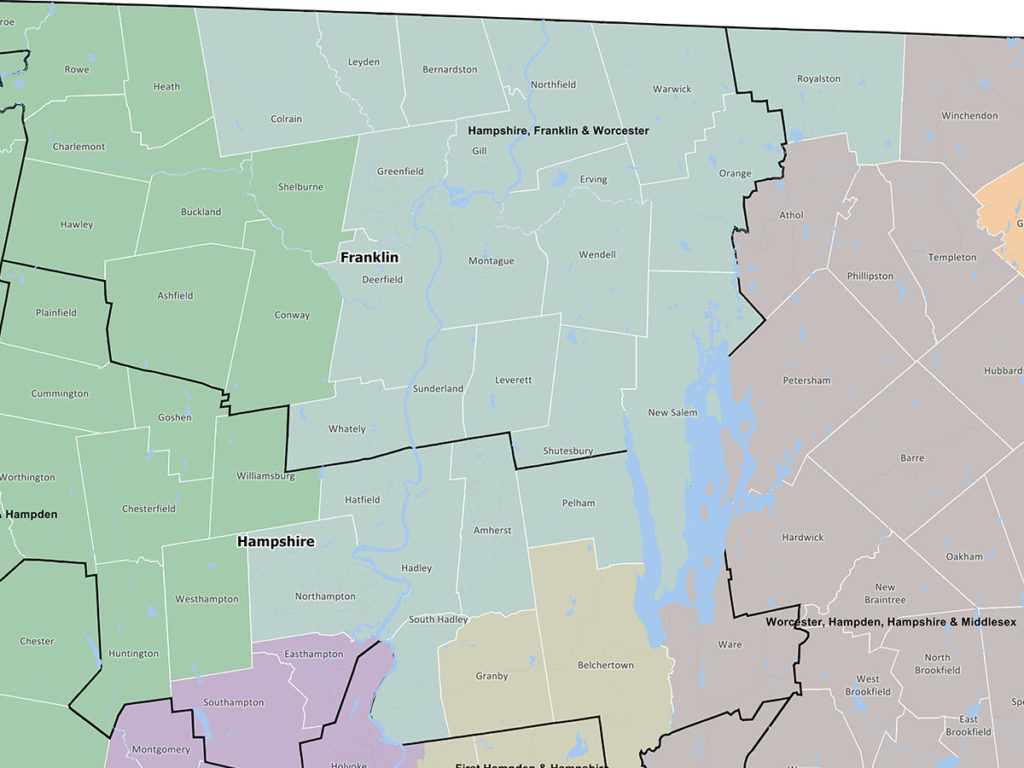 Comerford and her write-in rivals entered after Rosenberg resigned amid an Ethics Committees determination he had failed to protect Senate from his husband, Byron Hefner. In December, The Globe reported allegations Hefner had sexually assaulted men who work on or with Beacon Hill.

Still, the write-in campaigns were not without controversy, stoked by rumors of dissatisfaction with Kline as the sole name on the ballot. Comerford called this narrative “tremendously unfortunate” and rejected any involvement in candidate shopping. Rather, she praised Kline’s original and the write-in candidacies equally.

“I think it’s great to have a slate of candidate from which to choose,” she said, especially under the circumstances. “It makes us campaign harder.” Comerford even hoped she was challenged in future races if elected.

“The opportunity here is for the incoming senator to lock arms with Senators Lesser and Hinds and to go into the State House as a force to be reckoned with,” she said referring to Eric Lesser and Adam Hinds whose districts abut the Hampshire, Franklin & Worcester.

During an interview over breakfast at Jake’s in Northampton, Comerford discussed her path from working directly to social services to policy analysis and advocacy. 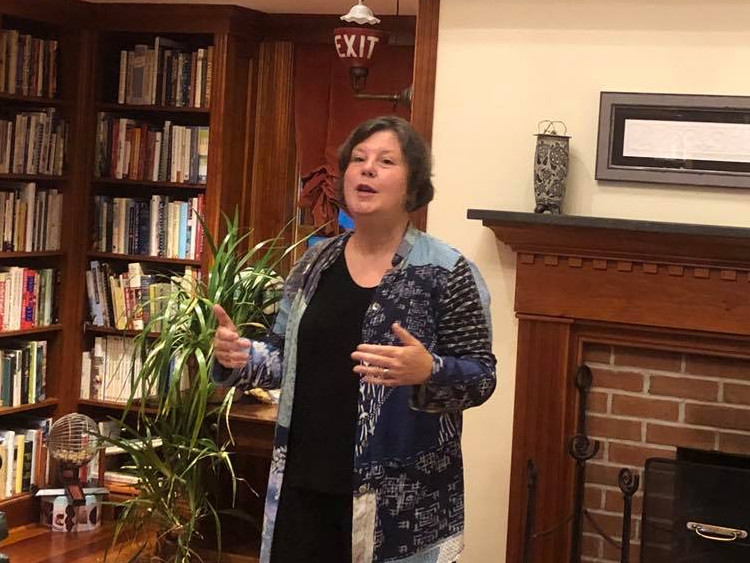 Raised on Long Island, Comerford came to Western Massachusetts for work. One of her earliest gigs was working on a crisis intervention team that helped people avoid recidivism. She recounted a harrowing example of helping a woman on the edge of relapsing. However, she could not find a treatment bed.

“I remember vividly having to race to Worcester with a woman who was going to use again, but she wanted to hang on to her kids,” Comerford recalled.

She held leadership posts with the American Friends Service Committee and the Food Bank of Western Massachusetts. Comerford then led the National Priorities Project (NPP), a Northampton-based nonprofit for six years. She was most recently Campaign Director for liberal advocacy group MoveOn.org.

Yet, MoveOn colleagues attested to her fortitude. Ilya Sheyman, the Executive Director of MoveOn Political Action, which has endorsed Comerford, highlighted her organizing accomplishments. He said she rallied gun owners to support then-President Obama to action on guns, defended the Iran deal, and fought to curb defense spending.

“Jo is a tremendous collaborator and doer who’s as effective at bringing people together to achieve goals as she is principled,” Sheyman said in an email. MoveOn staff know her to be “whip-smart, a superb listener, and a dogged organizer who lives her values every day,” he added.

Sheyman and others interviewed underscored her ability to organize on multiple levels.

“I know what it is to set strategy to build power, to find allies, to move a plan,” Comerford said.

That background is key to Comerford’s pitch. It has attracted volunteers and endorsements galore. They include unions, advocacy groups, former rival David Murphy, and a bevy of prominent electeds including Northampton Mayor David Narkewicz, despite O’Donnell, the City Council President, being in the race.

Back in June outside Northampton City Hall, Narkewicz said he could have stayed neutral. Yet he explained, “The critical issues facing our district are simply too important for me to sit on the sidelines.” 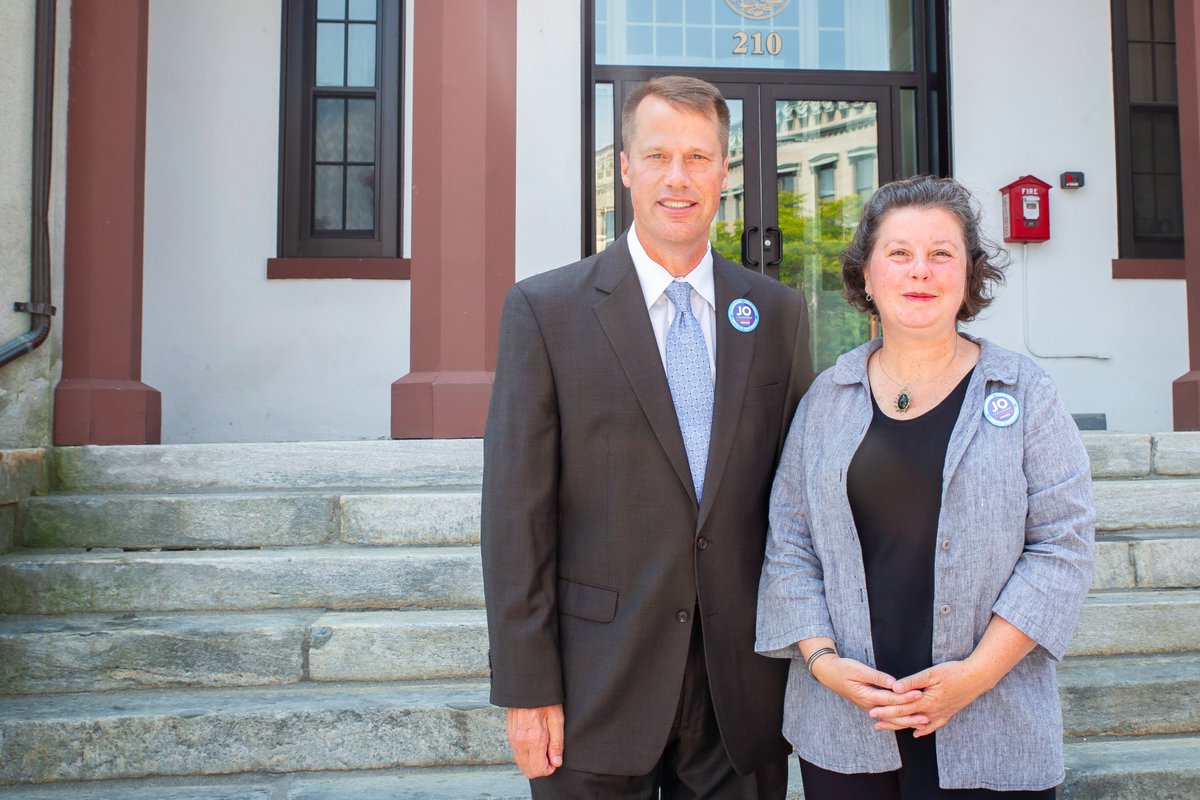 Mayor Narkewicz with Comerford last month. Though Noho is only one community of 24, Narkewicz’s support for Comerford was likely a blow for his City Hall colleague Ryan O’Donnell. (via Twitter/@jo_comerford)

Elizabeth Silver broke her longstanding rule to not endorse in primaries—she is the Northampton Democratic City Committee Chair—for the same reason.

Silver made clear the endorsement was not a critique of the other candidates in any way. Rather, it was about Comerford’s people skills and her command of issues.

“Having watched her through the campaign, I saw somebody who is tenacious and voracious about learning,” she said of Comerford. “Nothing halfway about Jo!”

On Monday, Comerford released an ambitious agenda for her potential first term filled with progressive priorities.

Education featured prominently. Like her parents, Comerford’s wife Ann Hennessey is a teacher and serves on the Northampton School Committee.  Their children attend public schools.

“I think it’s critical that this district send someone to the State House with a personal stake in the well-being of the public schools. I’m proud to have that personal stake,” she said.

Though she said charter schools had a “corrosive” impact on public education, Comerford focused on containment like maintaining the cap. She wants to fully fund the state’s charter mitigation budget line and regional school transportation. The latter is a perennial issue in the district.

On infrastructure, she mentioned affordabe housing and broadband Internet, another district concern. She also advocated rail service to Boston via Springfield and via Greenfield along the former Boston & Maine which Route 2 parallels.

Greenfield’s old station. You used to be to get there (Boston) from here without going to Springfield. (via wikipedia)

“For this region we have to think bigger,” Comerford said. “Twenty-five percent of emissions come from cars,” she said. She observed it’s a matter of environmental justice and climate issue as much as economic development. “We know the right things to do.”

While NPP’s executive director, the organization made federal budget information more accessible and localized. The International Peace Bureau even nominated NPP for the Nobel Peace Prize. The nod was for its work analyzing the allocation of military spending.

That familiarity with the finances, something her supporters almost universally noted, was apparent in her discussion of taxes. In addition to calling for corporate tax reform, she said the legislature should revive the Fair Share Amendment. Courts struck the amendment, which would raise taxes on Millionaires, on technical grounds.

Were the legislature, rather than a voter initiative, sponsoring it, the proposal could bypass the legal problem that doomed it this year.

“Tantamount to not talking about taxes is almost a willfulness to just be okay with continuing to disproportionately burden working people,” she said.

One example she used was transit cuts. With long distances and 21,000 people food insecure in the district (they don’t know where they can get their next meal) avoiding the revenue question left people without grocery store access even when they could afford it. 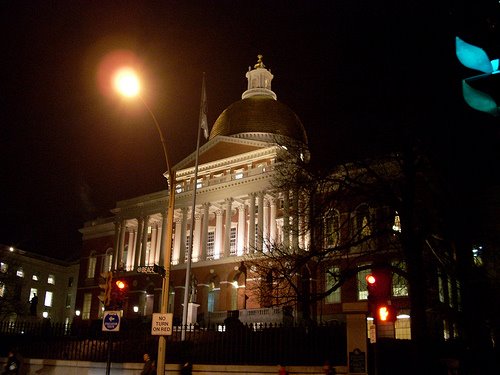 People have written their way in to Beacon Hill before. (WMassP&I)

But it will take more than compassionate wonkiness to win a write-in campaign across 24 communities.

Throughout the interview Comerford appeared confident. Yet, there was a sense it came from years of steeling herself against unfavorable odds. Though she has big-name backers and, presumably, fundraising, she is still running a write-in campaign in a sprawling district.

Indeed, she will need to supporters like Cherylin Strader, a Northampton High School student. She met her after co-organizing a senate candidate event.

“Since the forum, I’ve gotten to know both the race and Jo better and cannot express how impressed I am with Jo,” Strader said in an email. “As a young person, her detailed policy platforms, from health care to criminal justice to public school funding reform are exactly what I’m looking for in a candidate.”

The transformation to candidate is never simple and Comerford telegraphed a little amazement at the response.  Strangers were opening their homes, perhaps for the first time, to host her events because they think she can be their advocate.

“Few people who run for elected office bring such a powerful combination of talent, experience, humanity, and gumption to the table,” Sheyman, Comerford’s MoveOn colleague, said.

Comerford observed 100 years of regional legislative experience were leaving this cycle. “Whatever happens on primary day, this region, in this sea change, has an opportunity to redefine ourselves and head back to Boston in 2019 as a new force,” she said.

“I believe in the promise of this coming new chapter.”