Briefings: With Ashe Tapped to Be Chief of Staff, a Council Change Cometh… 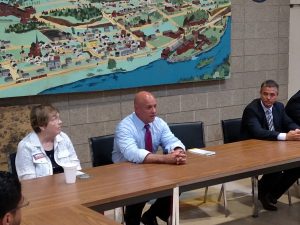 A seat at a different table for Tom Ashe. (WMassP&I)

Following state approval of Denise Jordan’s selection to lead the Springfield Housing Authority, Mayor Domenic Sarno has announced her replacement as his chief of staff. Thomas Ashe, an at-large city councilor, will take over as Sarno’s top aide. As Ashe is expected to resign his Council seat, his exit will provoke changeover on the chamber he has served since 2010.

Tracye Whitfield, a director of training and workforce development at STCC and a former city finance staffer, placed sixth in the 2017 at-large Council election. As the city has only five at-large seats, Whitfield did not become a councilor. However, under the City Charter, she is entitled to join the body should an at-large councilor leave before the end of the term.

Speculation about Ashe’s appointment began almost immediately after the Housing Authority board tapped Jordan to become executive director. Ashe is perhaps Sarno’s most reliable ally on the Council. Sarno has returned the favor with political support for Ashe’s bids for other offices. In addition, despite frequent splits on votes, Ashe generally enjoyed good relationships with his colleagues. That could be helpful as the city’s executive and legislative branches increasingly cross swords.

It is not entirely clear state Ethics law demand Ashe resign his Council seat. Yet two factors augur against him keeping it.  State ethics law doesn’t officially forbid holding two municipal jobs, but it does prohibit drawing two municipal salaries if one is for elective office. Moreover, the conflict of interest provision of state Ethics Law could effectively bar him from voting on all mayoral initiatives, which constitute an overwhelming majority of Council business.

The other factor is that as a candidate for other offices, Ashe has promised to resign rather than hold both positions.

News of Ashe’s selection was first reported by The Republican. The news was officially confirmed in a city Facebook post today.

I’m pleased to announce the appointment of Tom Ashe as my new Chief of Staff. Tom has served with distinction for 10…

Posted by City of Springfield, MA – Office of Communications on Saturday, September 8, 2018

Whitfield’s elevation, essentially a near-certainty, would alter the demographic and political makeup of the Council. In addition to upping its diversity, she would become the current body’s second woman. Whitfield, who is black, would make the Council majority-minority again, as it had been from 2014-2017. At-large Councilor Kateri Walsh has been the chamber’s only woman since Zaida Luna’s unsuccessfully sought reelection in 2015.

Although many women have served on the Council, Whitfield would be only its third councilwoman of color. In addition to Luna, Carol Lewis-Caulton served a term in the 1990’s.

However, the political impact could be just a consequential. Sarno and allies of his put their shoulder into Whitfield’s candidacy. However, it is not at all apparent that she would unfailingly toe the mayor’s party line.

To the contrary, Whitfield has signaled an interest in addressing some of the city’s social justice issues. For example, she has appeared, often prominently, at various demonstrations held in and around Court Square.

Still, her 2017 platform focused on more nuts and bolts issues.  Harkening back to her work as a fiscal analyst in City Hall, she emphasize economic development and workforce development.

“It’s mostly economic development,” she told WMassP&I in response to a question about raising new revenue. “We’ve got to continue to seek out small businesses because small businesses bring in the revenue, they add to the tax base and they also give jobs.”

At that point, Whitfield continued, residents can afford homes and cars which can contribute to the city’s bottom line.

As a Finance Department employee during some of the city’s roughest fiscal times post-Control Board, she is not unfamiliar with the Council. However, she would be joining an increasingly assertive body. The Council has been taking a more active role in city governance. Often times, it has come much to the consternation of the mayor.