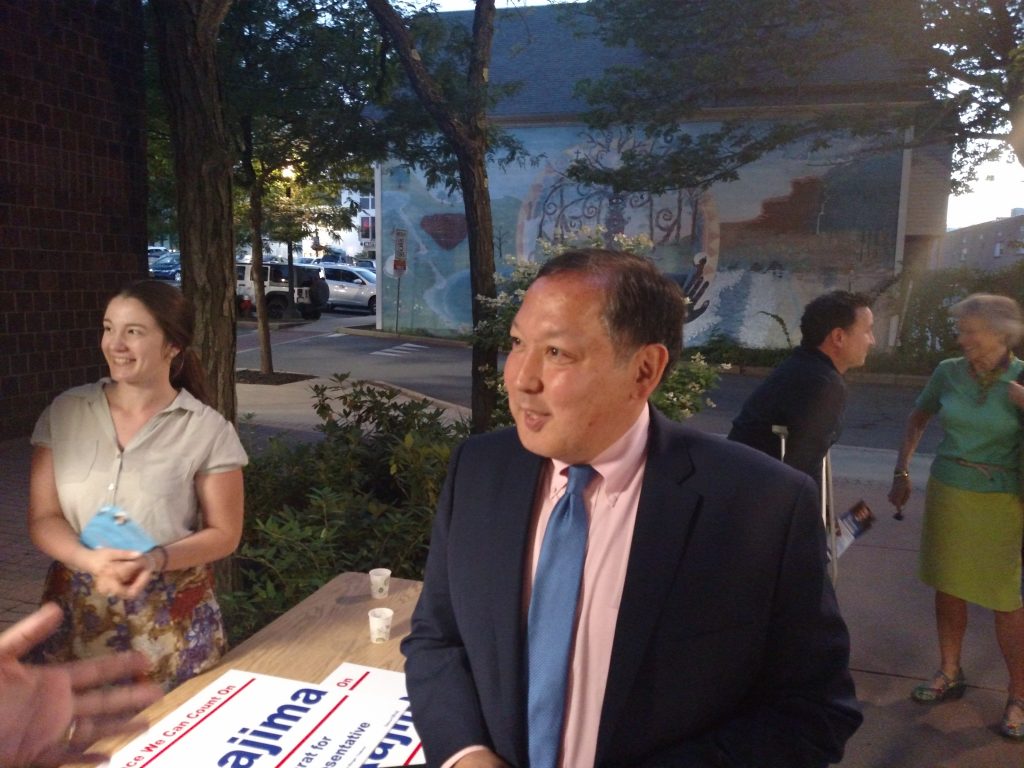 For all the anxiety of the present time, the United States had been through heart-wrenching change before. During the 1970’s and 1980’s, the economy was changing. Industrial powerhouses withered, and farms began to fail. It was a real fear to people in Eric Nakajima’s family. H went to college with and interest and an intent to do something about it.

Nakajima became an activist battling tuition hikes at the University of Massachusetts at Amherst. That rabble-rousing caught the attention of Governor Michael Dukakis’ staff even without graduating for the last year of the administration. There were some zigs and zags along the way, but it set him on a path to serve in the next Democratic administration and later compete for his hometown’s state rep seat.

“I really took advantage of that opportunity to just be an absolute sponge,” Nakajima said of his gig with Dukakis.

The 3rd Hampshire consists of Amherst, Pelham, and a precinct in Granby.

In taking on the 3rd Hampshire again, Nakajima, a member of the Amherst School Committee, is not facing a huge field as in 2016. However, Domb has countered some of his advantages with her own. Still, Nakajima has the benefit of name recognition and deep roots in Amherst.

When Nakajima first ran two and a half years ago, he was at an inflection point. At the time, he was heading the Massachusetts Broadband Institute (MBI) following nearly 8 years working for Deval Patrick. However, he saw the needs of the 413 extended beyond just economic development. With Story’s retirement he saw an advantage in being a legislator. One could be a generalist and touch many issues.

“I wanted to be in a place where I felt I could do the most good,” Nakajima explained.

In a phone interview with WMassP&I, Nakajima laid out his path from student activist to candidate for state legislature.

In his first race, Nakajima said he focused on income inequality and making college debt-free. He tied the two of them together as part of a broader failure to commit to raising standards of living ever as housing and transportation is deteriorating.

“We have substantially abandoned an commitment to building up the middle class,” Nakajima

He was candid with the ups and downs in his career path, noting diversions and unpopular calls. However, he conveyed an impression that he gained something from each such experience.

For example, his attention to activism and the governor’s distracted him from his studies and flunk out from UMass. In retrospect, Nakajima almost wishes the reason was partying, Animal House style. Rather, he was “just a nerd studying policy” all the time.

Ultimately, he got back on track and finished his degree in political science and later a masters in city and regional planning at the University of California, Berkeley.

After stints at policy institutes and consultancies, Nakajima joined the Patrick’s then-new administration. It was here that Nakajima would glean the knowledge of state government and other levers of power he says could be invaluable as a legislator.

Ascending from a senior advisor to an assistant economic secretary for innovation, Nakajima worked on several priorities of the Patrick administration. Among those were the innovation district strategy, workforce and advanced manufacturing programs, and Gateway Cities program. The last of those included efforts to spur growth in the commonwealth’s so-called Gateway Cities, which anchor major regions, but face persistent economic and social challenges.

He later served as head of the MBI amid growing ambitions, but also as it reckoned with the complexity of bringing high-speed Internet to all corners of the commonwealth. Nakajima called it one of the most difficult jobs he ever had, balancing the project needs against the costs, especially for communities.

“You can’t do novel and innovative public policy and execute it in the way that might dampen the long-term viability of your communities,” Nakajima said.

Such challenges have formed Nakajima’s views as a candidate. Drawing from his experience on the School Committee, he noted that the panel has had to close multimillion deficits. Among the reasons for the deficit were the legislature’s failure to update the foundation education budget stagnate. Complicating the problem has been the way charters draw additional funds away.

Elsewhere, Nakajima noted the limitations on the Massachusetts School Building Authority’s renovation prerogatives.  Currently, he said, the MSBA lacks the authority to help schools convert to net-zero energy policies so they produce as much as they use. Likewise, the MSBA cannot always fund roof reinforcements to install solar panels.

These experiences and background can, and sometimes do apply as much to 2016 as in 2018.

Nakajima said he had heard rumblings of discontent with Goldstein-Rose well before he left the Democratic party.  Specifically, the death with dignity coalition was unimpressed with Goldstein-Rose’s response. Others were critical of his views on nuclear power. 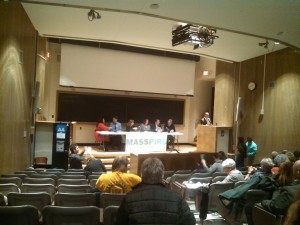 The candidate praised Goldstein-Rose’s focus on battling climate change. However, he conveyed a sense that some residents had become concerned other issues were getting some short shrift from Goldstein-Rose. Nonetheless, Nakajima did not plan to challenge him in the primary. Goldstein-Rose was new and needed time to learn.

But bailing on the Democratic party and sacrificing the district’s seat at the House majority’s table was a step too far.

“When he quit the democratic party, that propelled me into the race, literally,” Nakajima said. Within a day or so, he had announced his campaign for the Democratic primary.

Nakajima was able to revive parts of his 2016 coalition for the 2018 race.  Two years ago Nancy Eddy, a former chair of the Amherst Select Board, had highlighted Nakajima’s state government experience when she supported him.  As this year’s race developed, broader political events, such as the resignation of Stan Rosenberg, amplified her support for Nakajima.

“With the loss of our own Ellen Story and Stan Rosenberg coupled with that of three other Representatives in our region, it is critically important that we be represented by someone who knows his way around the State House,” Eddy wrote in a letter to the editor. She added that it needed to be somebody with a record of governmental accomplishment. 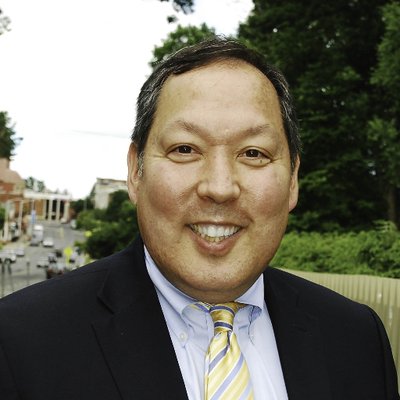 Eddy described how she and Nakajima worked together to get funding for the Hitchcock Center into an environmental bond bill.

Unions from the state AFL-CIO to locals of the Service Employees International Union and the United Autoworkers have lined up behind Nakajima’s candidacy. Though their endorsements have emphasized Nakajima’s commitment to organized labor and its issues, they, like Eddy, have highlighted his background in state government.

“If we’re having conversation about what we need to do next and what we have to do,” Nakajima said, “I’m putting into a deeper & richer context than someone who’s just getting started.”

The election of Nakajima, who is of Japanese heritage, would also help diversify the still largely white legislature. He was mentioned in a recent Globe piece about the uptick in Asian-American candidates this year. Supporters, too, have highlighted this.

There is something refreshing about Nakajima’s admissions that not all experiences in public life have been wine and roses.  Certainly, if he is successful, he will run into a House ruled by more conservative Democrats. Many are fearful of crossing the commonwealth’s moneyed interests.

Yet he also acknowledges that, even under the sunniest of expectations, to “substantially rebuild and reknit our commonwealth could take 8-10 years to do.”

Coming in with this recognition, Nakajima may be better prepared than some pols. The challenges haven’t dimmed his enthusiasm either.

Reflecting on how the system supported him even after stumbling during college, Nakajima noted how lots of people simply get lost in the shuffle.

“I not only had the general sense that we needed to improve society. I also had a personal experience.” Many were not as not as lucky as he had been.