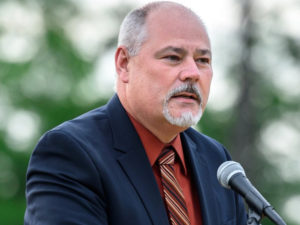 In a jolt to the Whip City politosphere, Westfield Mayor Brian Sullivan announced today he would not seek reelection to a third term. The decision not only marks the end of his mayoralty. It could signal a paradigm shift for politics in the city where the Sullivan clan has been a fixture in politics for years.

The mayor is not the only Sullivan—to which he was related—in city government. Brother Bo serves on the School Committee. But that Sullivan came to the position only after tragedy. Another brother, Kevin, then serving an at-large Committee member, died suddenly last year at the age of 52. Bo was appointed to finish the term. Although not decisive, Kevin’s death did weigh on the mayor’s decision to leave office.

“A lot has changed in my life over the last year,” he said according to The Republican, alluding to, among other things, Kevin’s passing.

Should Bo Sullivan not seek his own term on the School Committee, none in the family will hold town office.

Brian Sullivan’s initial mayoral run had been highly anticipated. In 2015, three-term mayor Daniel Knapik—scion of another Whip City political dynasty—said he would retire. Then-councilor Sullivan jumped into the ring, following in the footsteps of another brother, Richard. He won and took office early after Knapik resigned.

#Westfield Mayor Brian Sullivan officially sworn in! "I can finally lose the title of acting" he joked. @WWLP22News pic.twitter.com/g9g2bqmfoi

Richard Sullivan, Jr. had been mayor for 13 years before accepting an appointment from newly elected Governor Deval Patrick. He served throughout Patrick’s administration ending as the governor’s chief of staff.

The Sullivan family’s Democratic allegiance was also notable. Westfield has been politically fickle historically. Before Donald Trump, Ronald Reagan was the last Republican presidential candidate to win the city. Down ballot, the GOP has done better with noted exceptions like Democrats John Olver and, more recently John Velis.

Municipal governance, however, has usually followed consensus. For example, Democratic Sullivans and Republican Knapiks got along well. Former State Senator Michael Knapik even endorsed Sullivan in 2015.

Sullivan’s tenure has not been without turbulence, which probably factored into his decision. Efforts to pass water bonds needed to meet cleanliness standards descended into trench warfare at City Hall. In his second two-year term, Sullivan faced an empowered conservative bloc on the Council that decried the project’s cost. He ultimately prevailed, but only after weeks of bruising coverage and Council meetings.

In addition to the curtain falling, potentially, on his family’s electoral service, Sullivan’s retirement touches off Westfield’s most open mayoral contest in a decade. Although the seat was technically open when Sullivan ran in 2015, city political grandees essentially slid over to him from Daniel Knapik. The 2007 race between Brent Bean and Michael Boulanger was an open race after Richard Sullivan went to work for Gov. Patrick. Knapik later unseated Boulanger.

At this early stage, there are no obvious candidates. Until recently, many assumed Sullivan would seek reelection. His endorsement of Governor Charlie Baker, a Republican, seemed like an attempt to inoculate himself against potential charges of partisanism in the otherwise nonpartisan municipal elections.

Whip City watchers have eyed at-large Councilor Daniel Allie, who had faced off against Rep. Velis twice, as a Sullivan challenger. However, the conservative Council bloc Allie had putatively led for many years could rally behind Ward 3 Councilor Andrew Surprise instead.

A longtime Republican figure in Westfield and in the region, Surprise did not disclaim interest to The Republican. However, he indicated family conversations would precede any decisions.

Succumbing to peak speculation, other possibilities include once and again councilors like one-time mayoral aspirant Bean or former TV weatherman Nick Morganelli. But as much of Westfield’s pool of former councilors and other municipal notables still reside there, it may be unwise to limit conjecture to current officeholders.