Calculating Route from Orlando to City Hall…Turn onto Ramos’ Resume…

UPDATED 3/2/19 2:15PM: To reflect Ramos’ announcement he was delaying a decision on a mayoral run. 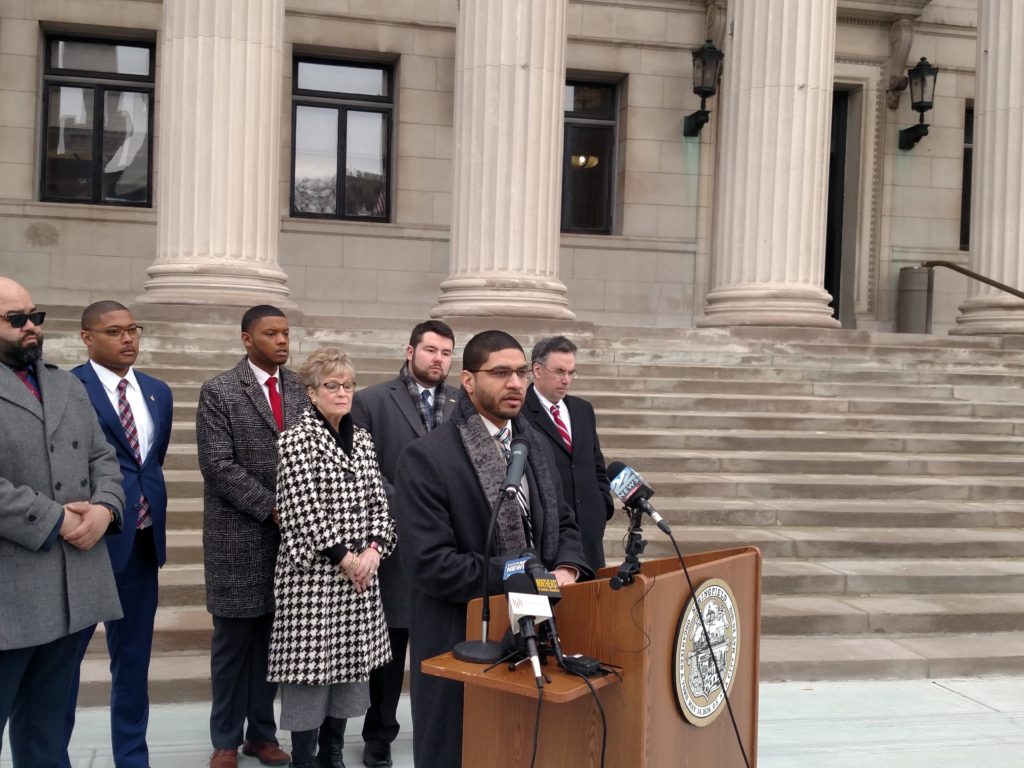 SPRINGFIELD—It took three tries for Orlando Ramos to join the City Council. But in 2013, he defeated the incumbent, John Lysak, Ward 8 two-term councilor. Rather than shunting him into perennial candidate status as many assumed, that election validated his stick-to-itiveness.

Now Ramos is setting his sights higher—maybe. Earlier this month, the 36 year-old councilor teased interest in running for mayor, breaking a citywide stupor that presumed Mayor Domenic Sarno would glide to reelection. Should Ramos enter the mayoral race, his chances may hinge on the very things that define his Council tenure and professional life.

On the City Council, Ramos has fallen solidly on the body’s activist bloc. Over the last five years, including his time as president in 2017 and 2018, councilors have grown more assertive and begun legislating at a pace not seen since before the Control Board era.

“I believe over my tenure, we were one of the most effective city councils in the history of our city,” he said. “I think we reminded ourselves of the powers that we do have as a legislative body.” 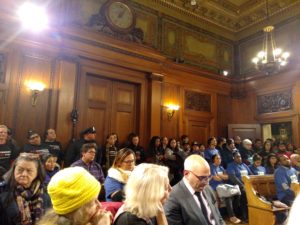 A view of the crowd at meeting on the WCT. (WMassP&I)

In 2018, the Council moved to block Sarno’s harassment of South Congregational Church after it began sheltering a woman slated for deportation. Those efforts culminated in the Welcoming Communities Trust (WCT) ordinance last month.

Other legislation passed included an affirmation of the Police Commission’s revival and a claw-back on businesses that obtain tax incremental financing (TIF) but violate building codes or workplace laws.

“Under Orlando’s leadership, he said we’re going to pass this [tax ordinance] and the city council got together, they passed it,” over Sarno’s veto said Jason Garand, business manager of the United Brotherhood of Carpenters, Local 108.

Ramos has filed legislation to expand that law to cover tax breaks like those Silverbrick received for its YMCA redevelopment. Work was halted last year for a host of violations.

Garand observed that Ramos continued the work and independence his predecessor, Ward 2 Councilor Michael Fenton had built, and handed current President Justin Hurst a stronger council. “Orlando took it to the next level,” Garand said of Ramos’ presidency.

Yet, Ramos has also seized on bad news from the Police Department’s Pearl Street headquarters, as his colleagues have. However, trickles of bad news on the eve of Ramos’ presidency—beginning with Gregg Bigda—became a flood afterward.

On Friday, the day after now-former Police Commissioner John Barbieri’s sudden retirement, Ramos and colleagues held a press conference on the steps of City Hall.

The controversy was bigger former Police Cmn’r John Barbieri. Now does the acting commissioner even have legal authority? (WMassP&I)

Some city wags feared the press conference would become a cop pile on. Rather councilors focused on the mayor’s refusal to appoint the Police Commission and the abruptness of police leadership transition. Ramos was blunter about Pearl Street’s woes.

“I don’t blame it all on the Police Commissioner. I blame the mayor,” Ramos said then.

During an interview in the Council committee room shortly after that press conference, Ramos emphasized the Council’s status as an independent organ of city government. But as it flexes its muscles, the mayor has pushes back, sometimes with outright misinformation.

“There have been times when the mayor has intentionally misguided the public in order to oppose something that is being proposed by the City Council,” Ramos said. “It was so blatant.”

The obvious example was the WCT. Sarno repeatedly made salacious claims and referenced financial risks federal courts had already obviated. But Ramos said Sarno also made false claims about the Police Commission ordinance and the TIF ordinance.

“He was probably more effective and stronger as a council president the more time went by,” Fenton said.

All three passed over Sarno’s veto during Ramos’ presidency or shortly thereafter. But that sustained mayoral resistance has pushed Ramos to consider a run for the city’s top job.

A spokesperson for Sarno did not returned a request for comment as of posting time.

Although he boxes, Ramos does not come off a political pugilist. Even when furious, he projects a controlled, even stoic mien. His battle gear is often a suit and tie, these days complimented by glasses that soften his intense hazel gaze.

Ramos said he never imagined himself in politics, let alone contemplating a run for mayor. 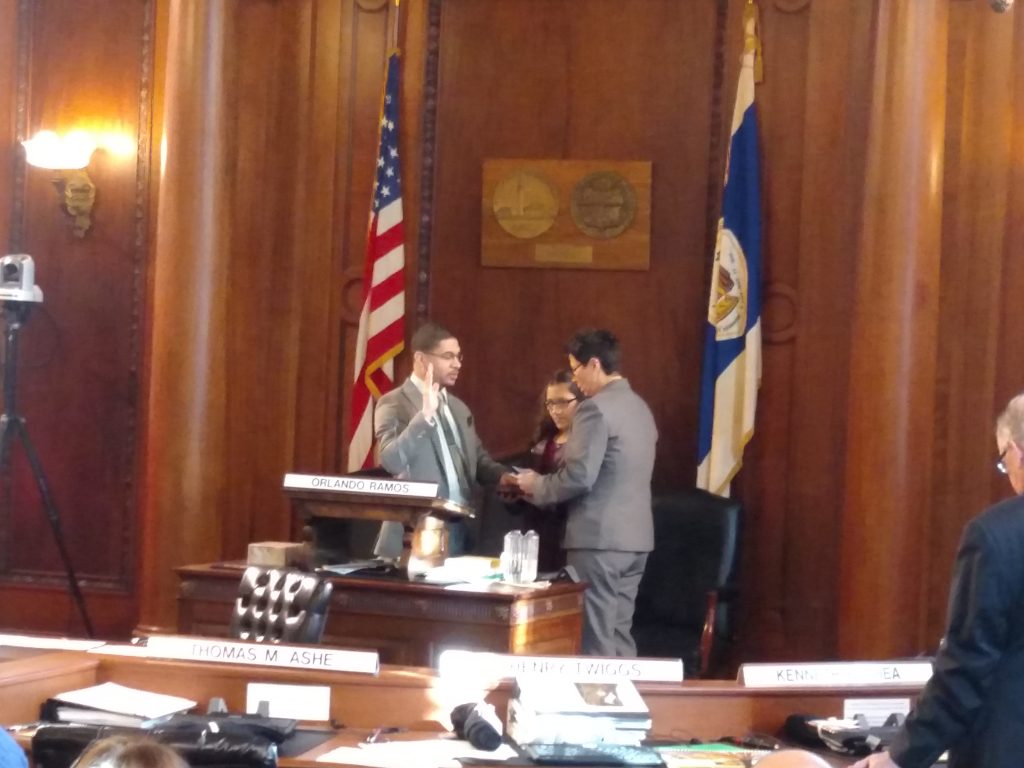 Former state rep Cheryl Coakley-Rivera swore in Ramos as Council President for the second time in 2018 as Ramos’ daughter looks on. (WMassP&I)

He doesn’t come from a political family. A chance internship in the governor’s office sparked his interest. But even then, Ramos thought he would be a carpenter. He participated in the union operations itself, serving as a steward and in other capacities. Ramos transitioned to politics full-time working in James Welch’s district office not long after his 2010 election to the Senate.

As an elected in his own right, Ramos’ path was a bit rockier. Lysak had bested Ramos in 2009 and 2011. By his third attempt in 2013, critics deemed Ramos an establishment tool. Compared to Lysak’s idiosyncratic tenure, the claim was not ridiculous. But after finally outhustling Lysak, Ramos has largely proven the charge wrong.

Supporters credit his service to Ward 8, which includes Indian Orchard, Boston Road, and parts of the Pine Point. Zaida Govan, president of the Indian Orchard Citizens Council, praised his engagement with her neighborhood.

“He is responsive to our inquiries when we make them. He attends our Citizens Council meetings when he can,” Govan emailed. That has included big community events like Indian Orchard Blooms and the food truck festival.

Govan also vouched for his judgment in the Council chamber.

“He might seem to be middle of the road on different issues. But in the end, I believe he usually makes the right choice and is on the right side of history,” she wrote.

Domenic I will not be vanquished easily. (created via Business West & Hyacinthe Rigauld’s Louis XIV images)

If he runs for mayor, Ramos must channel this background just right. He acknowledged that fundraising will be daunting. Ye, he indicated it could be easier since leaving his job in Welch’s office in January. Massachusetts bars government employees from soliciting donations for political campaigns, even their own.

Along with reforms at Pearl Street, Ramos said his platform would target diversity in the Fire Department. He was one of six councilors who voted against the district fire chiefs’ union contract. That bloc arguing the prior pact already had a residency requirement. That vote, and his management of debate of the issue, drew jeers in some quarters and contributed to the narrow margin by which he secured reelection as president in 2018.

Ramos also spoke about better communication and neighborhood attention.  Ramos, who has largely supported MGM, noted that gaming company sought support in all neighborhoods during the 2013 referendum. Now, those same neighborhoods feel left out from the casino’s benefits.

“What I would like to see is a better way to evenly distribute those funds across the city,” Ramos explained. One form that could take is tax relief.

One of Ramos’ biggest challenges is the mayor’s presumption of inevitability, thought shaken in recent months. He said he has reached out to several organizations, but sources are skeptical about those group’s interest in confronting the incumbent.

Look for the union label? (via wikipedia)

Ramos has one advantage: his union card. Though he left manual labor some time ago, he remains a member of Local 108.

Garand, the carpenters’ business manager, would not say what his union would do if Ramos ran for mayor. In a phone interview, he explained that Sarno had supported union priorities like restructuring the Responsible Employee Ordinance. The Council just passed a major revision aimed at bolstering the statute the mayor’s support.

“That’s an example of how the two sides can meet and really work together,” Garand said. It made Springfield a “leader on language like this that protects workers.”

Yet, Sarno also opposed the TIF ordinance. Garand indicated City Hall could advocate for more fairness on jobsites, pointing to MGM’s construction as a successful model. Silverbrick got attention because they got caught. However, safety, wage and hour, and other violations are all too common in the construction trades.

“If there’s a labor person who’s running, there’s a strong incentive to go for the next piece of the puzzle,” Garand said.

As for broader labor support, Ramos might have difficulty securing the Pioneer Valley labor council’s support. However, that is partly due to a 413-wide reorganization of local labor councils. The threshold for endorsement is also high. A candidate must receive the backing of 2/3 of the delegates on the council’s Committee on Public Education. But Ed Collins, a longtime labor activist in the region said no endorsement could be significant, too.

“The bigger question probably is not whether or not a city official who is card-carrying member would actually get the endorsement, but whether or not such an individual might be able to prevent an incumbent mayor from getting the two-thirds,” he said. “That’s the thing to watch for.”

Should Ramos run, he does risk joining the ranks of pols Sarno vanquished. But there is value in giving voters a choice.

“Democracy is stronger when municipal elected positions are contested,” Fenton said. “I think that Orlando would present a stark contrast to the approach that our mayor has taken on certain issues.”

Orlando Ramos a few weeks before he became Council President in 2017.
(WMassP&I)

Ramos had promised a decision by month’s end.  On March 1, he indicated he had been leaning against a run, but recent events had led him to reconsider. He said he would need more time to make a final decision. He told WMassP&I the week before, among the factors he is weighing are fundraising and the impact on his family.

However, Ramos is also considering whether this minority-majority city, can realize this aspect in its top job. Despite electing a rainbow of officials to Council and School Committee, doubts remain Springfield will elect a nonwhite candidate in a one-on-one nonpartisan race citywide.

“I know that there are many qualified people other than myself that can do a very good job,” he said. “That’s one of the things that weighs heavily on my mind. When is this city ready to elect its first mayor of color?”