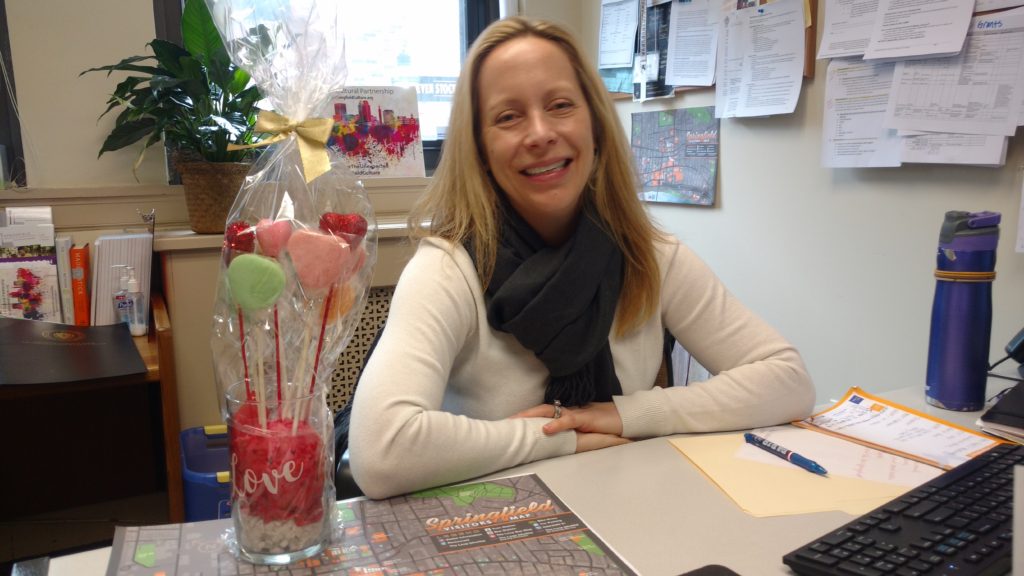 SPRINGFIELD—Eager and open, Karen Finn is a new face on the cultural scene in Springfield. The executive director of the Springfield Cultural Partnership has been on the job in her modest office space in the Community Music School in downtown Springfield since September. She replaced Morgan Drewniany, who was pirated away last spring to become West Springfield’s community development administrator.

I sat down with Finn this week to see how she’s settling in. Our conversation was an occasion to catch up on the contours of the developing cultural scene in downtown Springfield. Finn’s journey to Springfield is a story that underscores the importance of the city’s commitment to supporting and promoting its many cultural assets.

A native of Fort Worth, Finn is armed with an MBA in operations management from the University of Dallas. She worked in risk management for aerospace and defense giant General Dynamics in Virginia, owned her own business and then landed in academia as a program manager at Mamdouha S. Bobst Center for Peace and Justice at Princeton University. She first encountered Springfield when she was house-hunting here from southern Pennsylvania in advance of a job move for her husband.

The initial relocation advice was sobering, she says. “When we were moving here and getting input from real estate agents, from friends who live in the region, from people who went to school in the region, everyone said, ‘Stay away from Springfield.’ I was terrified.”

But then they began to explore the area on their house-hunting trips. “When we tried to come up with activities to do with our family we found events at the MassMutual Center, and we found a whole downtown filled with every kind of food you could want. And they were local one-off establishments, my favorite kind of restaurants,” she says. “But also, we could go to the Basketball Hall of Fame and the Springfield Symphony Orchestra. We took the kids to the Dr. Seuss museum and they ended up really loving the Springfield Science Museum just as much.”

The Finns bought a house in Longmeadow before she moved to the region with her children in June, but perhaps if the cultural assets of Springfield had been more apparent initially, it might have been different. Making that difference is the mission of her new employer. 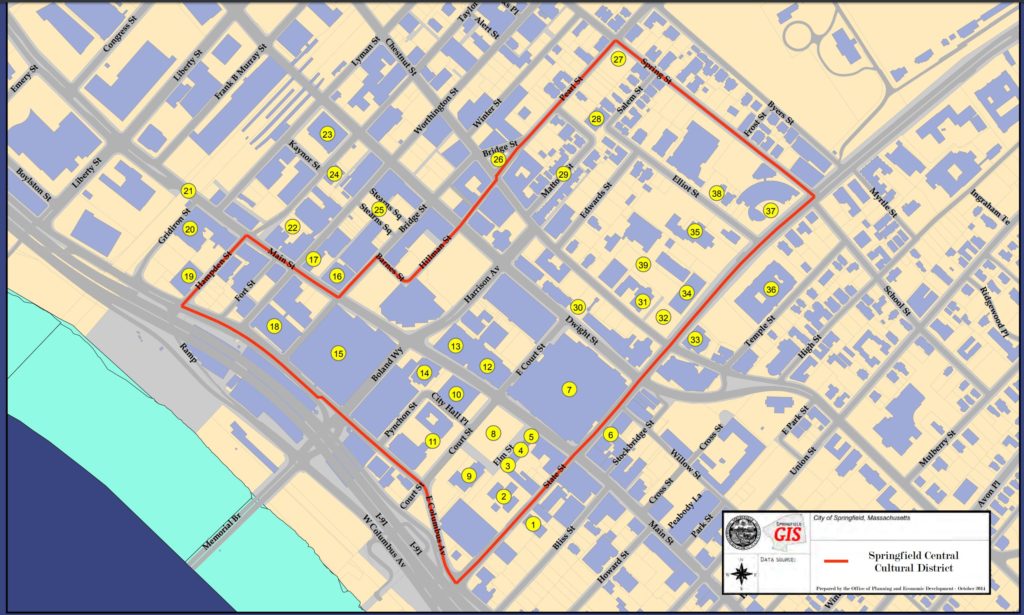 A walkable nine-block area in center-city Springfield, the state-designated district is one of 45 across charged with fostering culture to improve quality of life and stimulate tourism and economic activity. It includes Symphony Hall, the MassMutual Center, the Springfield Central Library, the Quadrangle museums and historic buildings. Finn is attracted to the work because it suits her outlook. “I think that arts and culture are huge drivers in our economy,” she says. “They can help drive people into cities where they want to stay and feel a part of it and be enriched.”

She adds, “At heart, I am an advocate and I am here to advocate for the artists and the artists organizations. This is my home, and I want it to be an enjoyable place to raise my family and to be present. Arts and culture bring that.”

Finn has her sights set on “connecting the dots” among artists and organizations in the Cultural District and throughout the city.

Unlike cultural districts that are part of local government, the Springfield Cultural Partnership is a member-based, independent nonprofit funded by competitive grants from the Massachusetts Cultural Council and philanthropic foundations.

This structure gives the Cultural Partnership, in Finn’s words, “the ability to stretch our arms a little further than the Cultural District and draw in artists, schools and organizations from other parts of the city. It also allows us to work closely with the Business Improvement District.” 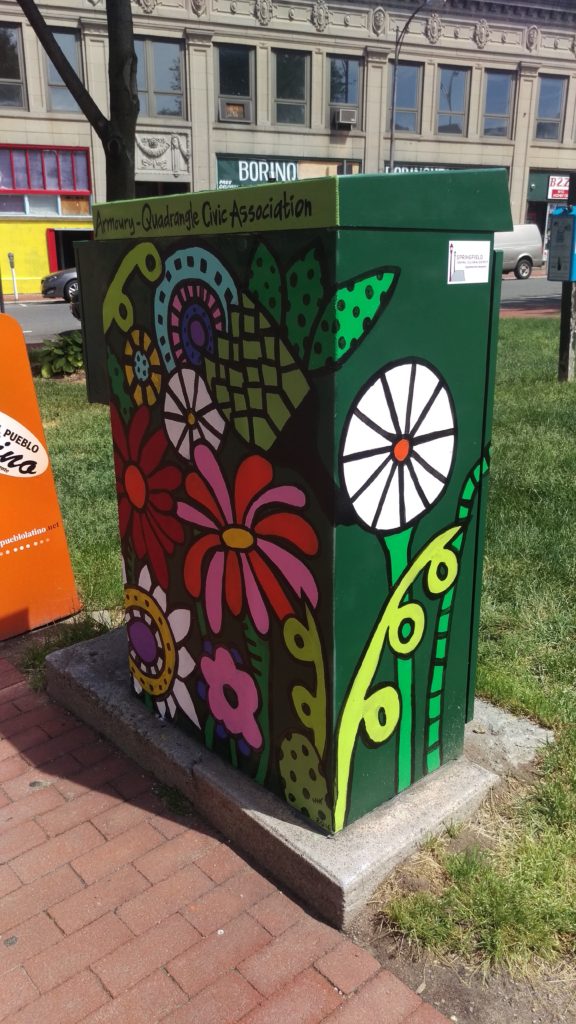 The Partnership has more than 50 members, including Public Television station WGBY, New England Public Radio and Focus-Springfield Community Access Television. Cultural mainstays outside the district partnered up include the Springfield Armory National Historic Site, the Drama Studio and the Bing Arts Center in the Forest Park neighborhood, and area colleges and universities.

Highly visible manifestations of the work of the Partnership in the Cultural District are the Art Stop pop-up art galleries—where local artists exhibit and sell—and public art projects such the Painted Pianos and the Utility Box Murals. Finn also points to the behind-the-scenes database of artists she hopes to develop even further to connect the city’s creatives with those who want their services.

Finn brings fresh eyes to view the synergies developing in Springfield’s cultural community and is excited by what she sees.

She’s inspired as she describes the complementary work of the Cultural Council during its open pitch night for grant-seekers: “It was really moving to hear people’s passions, but it was really cool to hear how people could connect. Here you have 15 jazz musicians in a room. Maybe there’s a way they could collaborate in the future.” 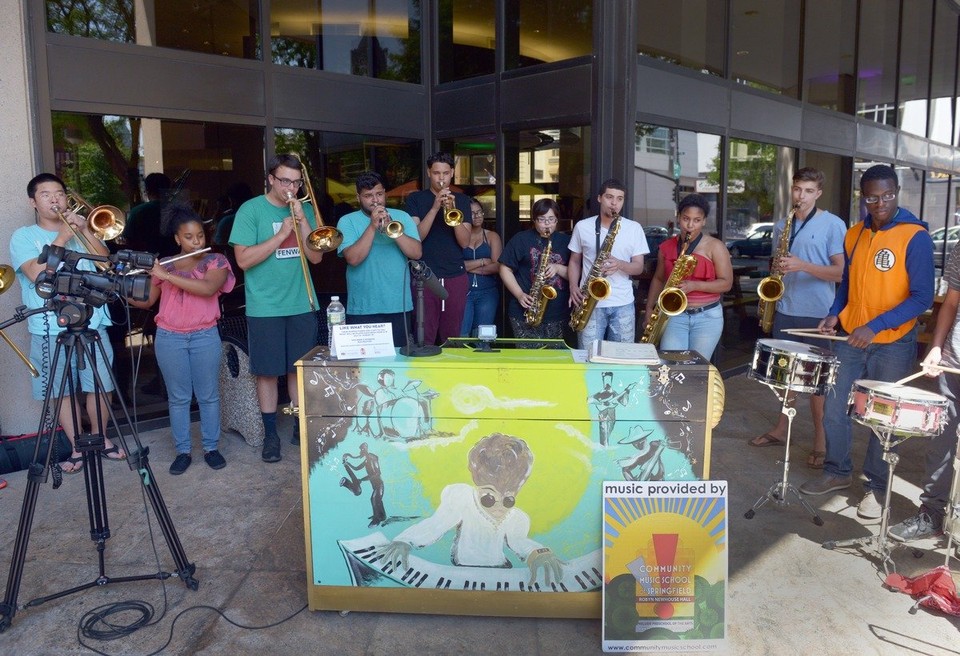 She’s connecting the dots: “Here are the people who applied for grants; here’s what their program is like; how can we try to connect them – so that next year they can come together and have a more comprehensive grant application, or maybe they at least walk away with a new friend or band member.”

Finn is energized by the exchanges in the Partnership’s meetings. “We can have 25 cultural organizations in the room and it’s like fireworks — ‘Ooo, I can help with that!’ ‘I know that person.’ ‘We’ve done that before; I have lesson learned.’ You have this group of people who are committed to each other.”

She’s almost giddy about the expanding restaurant scene in the Cultural District. “We have a restaurant district in Springfield now. In March, we’re going to have three or four new ones. They literally are popping up every month. We now have a Springfield Macarons in the Shops at Marketplace.”

The fortitude of Springfield’s people impresses her. She recounts being told about a homeless glass artist who’s working at the Make-It Springfield shared space on Worthington Street. “The people here are strong, they’re hardy, they’ve overcome various histories. Also the tornado in 2011. Springfield stands pretty strong. I think that’s what we want to highlight.”

And she’s alert to what the advent of MGM-Springfield casino means for the city. It’s the top question she gets from other cultural districts. It’s a bit early to tell, she says. “I’d like to see concrete numbers. They have not been here a year yet, so I think they are still figuring out what works for them.” 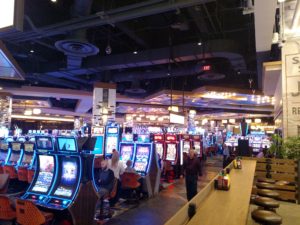 Can MGM bring more than a gaming culture? (WMassP&I)

“Their success brings success to downtown,” she continues. “The city’s arts and culture can really help [MGM] convert people who are day visitors into overnight visitors.” MGM also employs a lot of people, another prospective audience for the Partnership. Both entities are in talks about what their relationship will look like.

Finn points to the lack of available and affordable space of creative activity in Springfield as something on her radar. “We are at the brainstorming stage,” she says. “One dream would be to find the spaces that already exist and find the low-use times and activate them for use by local artists and performers.”

Another work-in-progress is the ongoing mission of the Cultural Partnership to make Springfield a premier cultural destination in the state and across the region.

Finn’s assessment: “I think we’re still in the foundational stages. We’re doing a good job locally for people in Springfield to stay and play after work.” As for achieving the larger goal, that has to be a collective effort, she says. “It has to include the City. It has to include MGM because they’re drawing a whole new crowd.”

As we wrap up our conversation, Blues to Green founder Kristin Neville arrives at Finn’s door to talk about synergies with her summer Jazz & Roots Festival in Court Square, now in its sixth year.

Finn grins and prepares to connect some more dots.