Culture Vulture: The Joint Was Jumpin’ at State and Main… 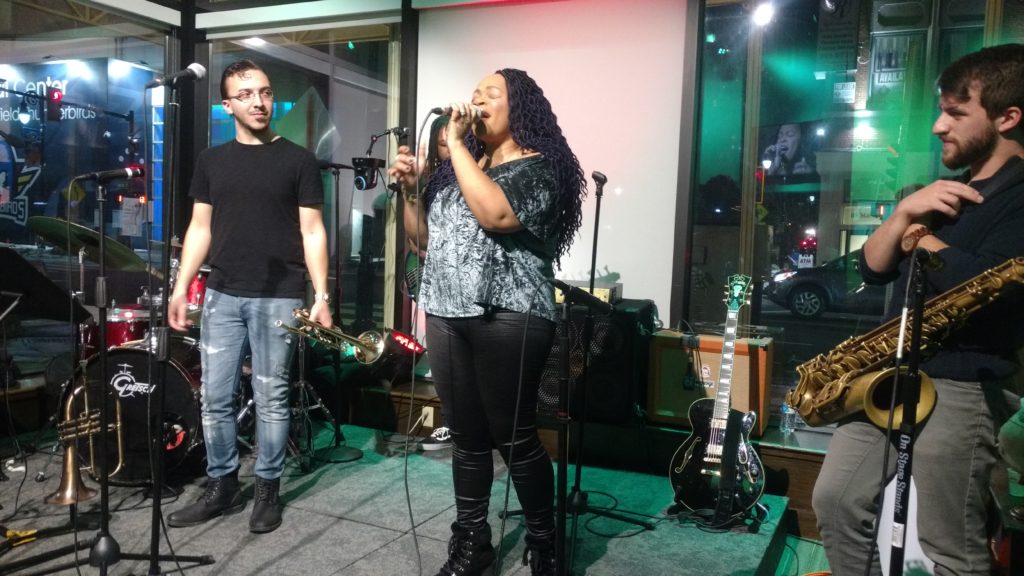 SPRINGFIELD – What started as an intimate session with friends in a Springfield living room went public in a big way Friday night as energized jazz musicians packed Focus Springfield TV’s lobby for a jumpin’ three-hour jam. The sights and sounds, punctuated by subtle washes of colored lights, spilled out onto the sidewalks at the corner of State and Main creating a compelling urban tableau – just the right vibe for Springfield’s aspirational downtown scene.

The Springfield Community Jam is what can happen when a musician and a guy who digs music want more of a good thing.

The musician is Springfield jazz trumpeter Jeremy Turgeon, whose Jeremy Turgeon Quintet gigs regionally and in New York City. When Turgeon couldn’t find many improvisational jazz jams in the Valley, he decided to take matters into his own living room. “We quickly outgrew my apartment between musicians and friends who just wanted to hang and vibe with us,” he said. 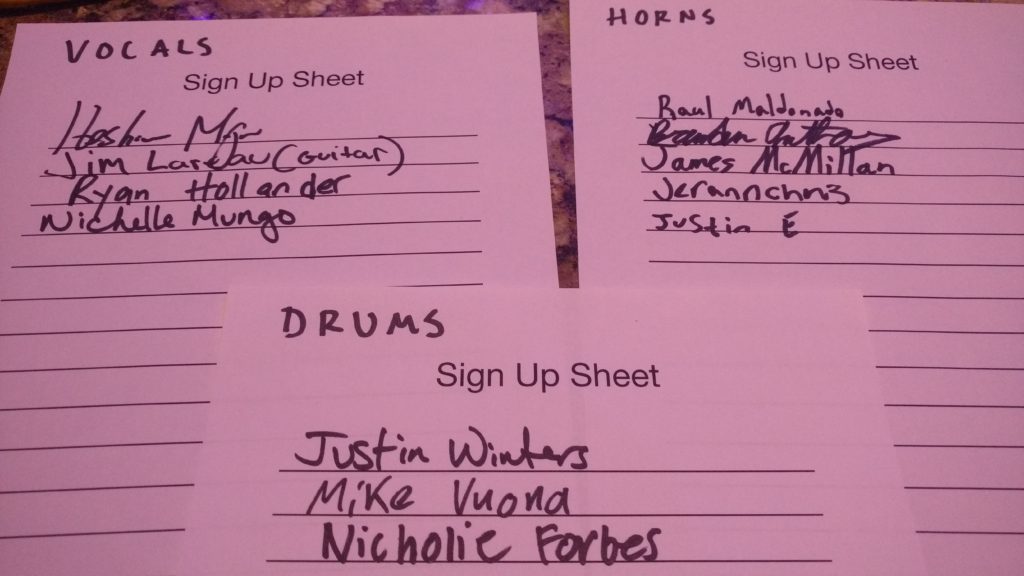 Musicians signed in at the door for a turn at jamming. (Linda O’Connell for WMassP&I)

Digging Turgeon’s growing house sessions was Focus Springfield staffer Brendon Holland. Holland went to his first concert at four months old strapped to his father’s chest. He played a variety of instruments but gravitated toward producing. “I love being able to make musicians sound their best and helping others feel the rush of endorphins I feel during a great show,” he said.

Holland and Turgeon thought it would be cool to connect even more jazz musicians in the Valley by opening the jam sessions up to a live audience, recording them, and streaming them on Facebook. So did Holland’s bosses, Focus Springfield’s executive director John Abbott and station manager Steve Cary. It fit right in with their plans to build on the nonprofit community TV station’s government and education content with more music, arts and culture programming.

They hatched a plan to pilot their inaugural Community Jam with invited guests last October. Its success led to Friday’s doors-wide-open event.

Focus Springfield operates the cable public access network in Springfield and is funded by fees Comcast pays for the right to operate in the city. While some municipalities retain funds for their community access stations, Springfield established Focus Springfield in 2012 to operate the station and produce its programming. The network’s management takes an expansive view of its public-service mission, sponsoring and broadcasting events like the Community Jam.

Turgeon presided over the evening with contagious energy. After a tight opening offering from his band, he invited musicians who signed up at the door to sit in with the quintet – on keyboards, guitar, bass, horns, drums, and vocals. 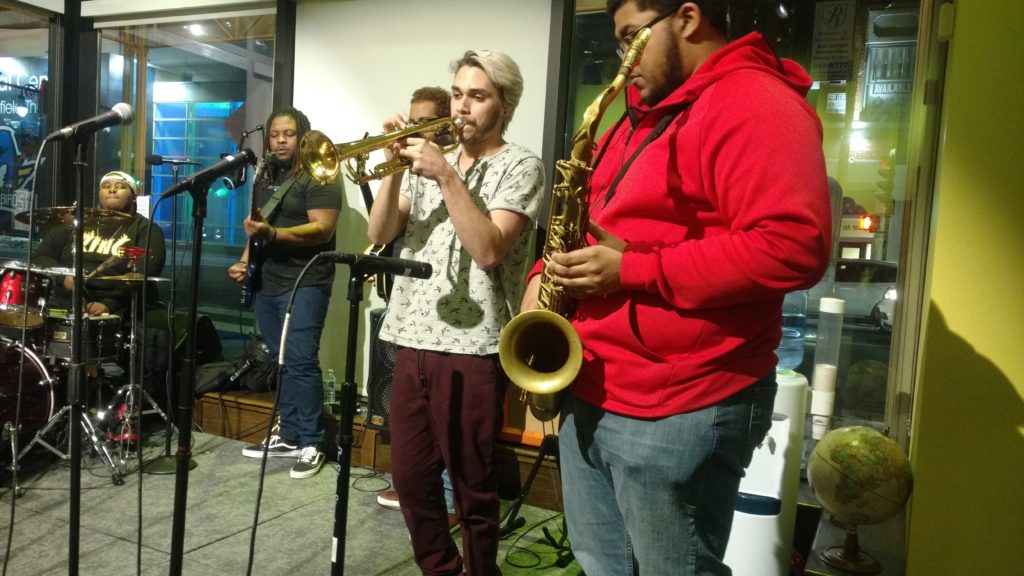 Trumpeter Jeranndchrist Rivera of Springfield stepped in with a spare and thoughtful improvisation. He said later that he loves the “magic” a jam can create. “There’s just something about the freedom to be able to express yourself,” he said. “What I played is what the group made me feel.”

Teenage trumpeter Raul Maldenado, a Sci-Tech student, stepped up to experiment. It was a rare opportunity. “I like improvising, but I rarely do jazz,” he said. “I want to get better at it, so I thought, ‘Better now than never.’” Maldenado was tentative at first, but the band urged him on with musical support and shared smiles. Later he was joined on stage by four more members of the famed Sci-Tech band, who took well-rewarded turns at the mics. A jam like this is a real gift to musicians who are too young to hone their skills at bars.

After a turn at the keyboard, Matt Twaddle, a UMass student from Pennsylvania, said he reveled in the freedom and communion a jazz jam delivers. “It’s all about how you communicate with the other musicians,” he said. “You figure each other out.”

Tenor sax player Alton Skinner, a former high school classmate of Turgeon’s at Sci-Tech, expressed what was becoming clear as the music flowed. “There needs to be more of it,” Skinner said. “It’s good right here downtown. The atmosphere is right, and it’s drawing people to play.”

Turgeon’s quintet also got to swing, displaying cool musicianship and easy communication in showcasing their new single “Just Feels Right,” with the horns boosted by baritone sax and flugelhorn.

Band members are Nick Biagini on tenor and baritone sax; Jarreau Pitts on keyboard, Forest Loomis-Dulong on bass; Ashdon Reynolds on drums; with Turgeon on trumpet and vocals.

A highlight of the evening was the appearance of band friend Heshima Moja, who handled his six-string bass like a lead guitar. His flashy under and over the neck fingerings were a thing to behold. 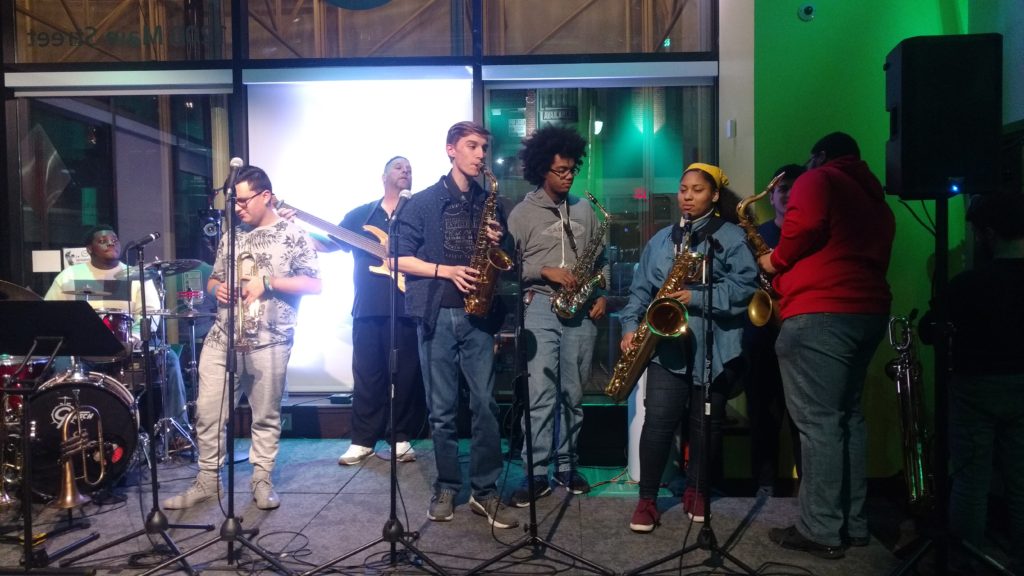 Throughout the admission-free evening, Holland ran the sound board, grooving to the music and making it work in the relatively small space. From his vantage point, he estimated that between 80 and 100 people, including the 15 musicians who came to play, had dropped in. The crowd, as well as the musicians, was deliciously heterogeneous age-wise, gender-wise, and skin-color-wise.

The quality of the Jeremy Turgeon Quintet was a serious treat for those stopping by. Geoff O’Connell of Springfield (this reporter’s husband, and a composer/keyboardist) observed that the outfit he had heard recently in a Washington, D.C., café was not as “tasty.”

Another listener was Springfield resident Jeff Sullivan, a member of bar band The Blood Brothers, who by day is president of New Valley Bank. Sullivan viewed the jam in light of downtown Springfield’s hoped-for renaissance. “Downtown is building up,” he said. “To have something eclectic like this is very cool.”

Also on hand was Mark Sherry, president of the Holyoke-based New Music Alliance, which aims to support Western Mass musicians who produce original music and to promote the region’s music scene. Sherry’s assessment of the evening’s doings: “Great! There should be more.”

On my way out, I spotted Jingyuan Zhang seated in the alcove in front of the door. Zhang, who came to the United States from China and now lives in Springfield, was listening intently. Her interest in the music captured the power of music to communicate and spoke to an overarching significance of evening for me. “I don’t understand jazz, but I want to learn,” Zhang told me, “because it’s part of American culture.”