This week I’m drawn to two opportunities to engage in cultural dialogues. Springfield’s Art for the Soul Gallery offers artist Dane Tilghman contemplating a slice of African-American history that speaks to him. Meanwhile, in Longmeadow people are reading Shakespeare for pleasure! 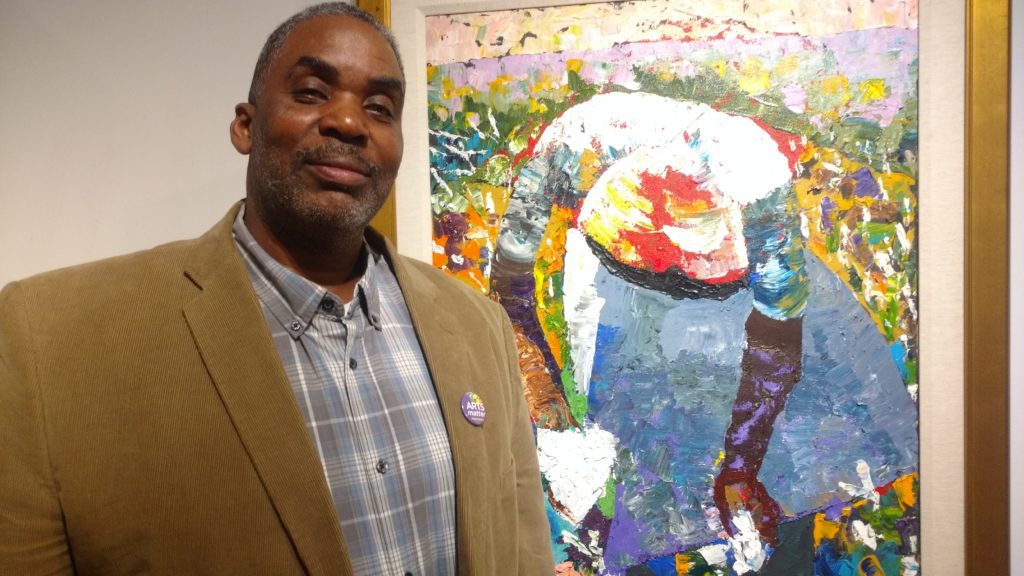 Dane Tilghman was on hand to explicate his work at Art for the Soul gallery opening. (Linda O’Connell for WMassP&I)

Making a Soul Connection to Those Who Came Before

Artist Dane Tilghman has been channeling aspects of the African-American experience throughout his career in ever-evolving styles. An outpouring of his paintings contemplating daily life in the Jim Crow era is now on exhibit at Springfield’s Art for the Soul gallery. The work is accessible and compelling.

Born in rural Pennsylvania in 1957, Tilghman began his career as a graphic designer. As a painter, he gained commercial recognition for his art depicting Negro League baseball and African-American golf. One of his paintings hangs in the Baseball Hall of Fame Museum in Cooperstown, New York, and he was muralist for Turner Stadium in Atlanta. A frequent exhibitor in galleries and museums and at regional festivals, Tilghman has also made his way into other spaces. For example, Sylvester Stallone’s 2015 movie “Creed” featured his painting “Church Picnic.”

The recent show opening at Art for the Soul found the warm and avuncular artist offering a guide to his process and his perceptions. The work in his “Just Talking” series, he tells me, is drawn from his study of black and white photographs taken in the early to mid-1900s in the American South. Historic images, many of which he harvested from the Library of Congress archives, called out to him.

Tilghman and I first stop at his painting “Gentleman Farmer.” The acrylic on canvas is based on a portrait by African-American photographer Richard Samuel Roberts, who operated a studio in Columbia, South Carolina, from 1920 to 1935. Roberts’ images reveal the social, economic and cultural realities of the black South and document the rise of the black middle class.

In his painting, Tilghman interprets the photo of man attired in a suit holding the reins of a cart horse. “I try to pick photos that speak something to me,” he says.  Viewing a black and white image lets him “feel the soul” of his subject. “And once I’ve made that soul connection, it’s easier for me to paint because I have to honor that individual,” he says. 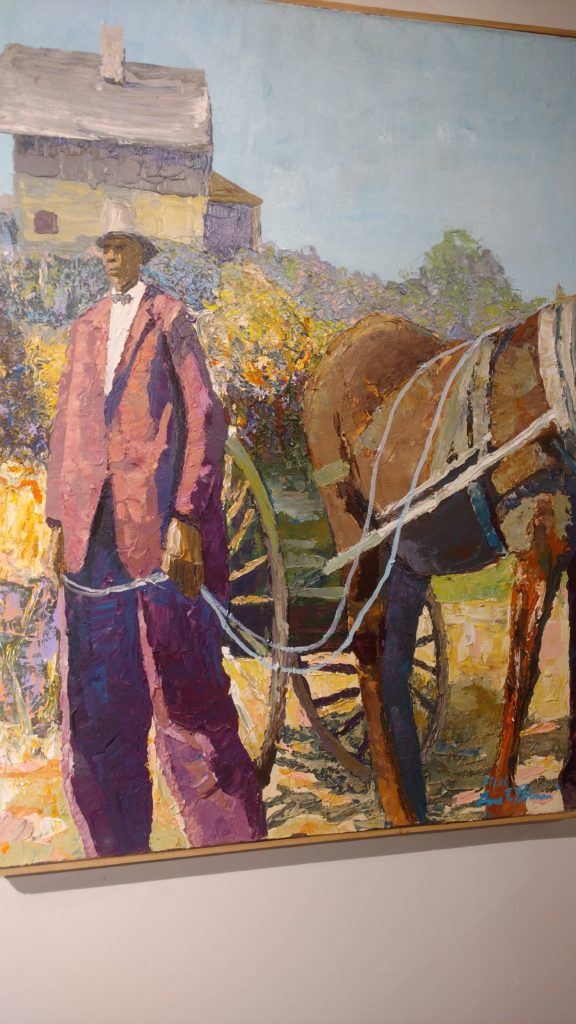 Notable in the painting is Tilghman’s departure from the literal photo. The horse’s head  is out of view and the figure elongated so it tapers upward from heavy, grounded legs to a small indistinct face. He describes this primitive elongation technique as part of a personal folk-art influenced style he calls “tall tale art.” For him, the elongation enhances the story-telling.

Then, he narrates this gentleman farmer for me: “This is the kind of individual I would like to know – how he became a farmer, his philosophy for running that farm, that sort of thing. He was probably a father, a grandfather, husband. He had his own land, which wasn’t uncommon back then but a lot of African American men probably worked as tenant farmers.”

We leave the farmer and wander on to “The Basket Makers,” based on a photograph taken at a trade school at St. Helena’s Island in South Carolina. The faces of the grass-basket weavers are again obscure, their legs rendered prodigious by swirling impressionistic brush strokes. “For me the personality of the individuals was not important. It’s celebrating the ingenuity, the ability to create something from the natural environment and turn it into money,” Tilghman reflects. 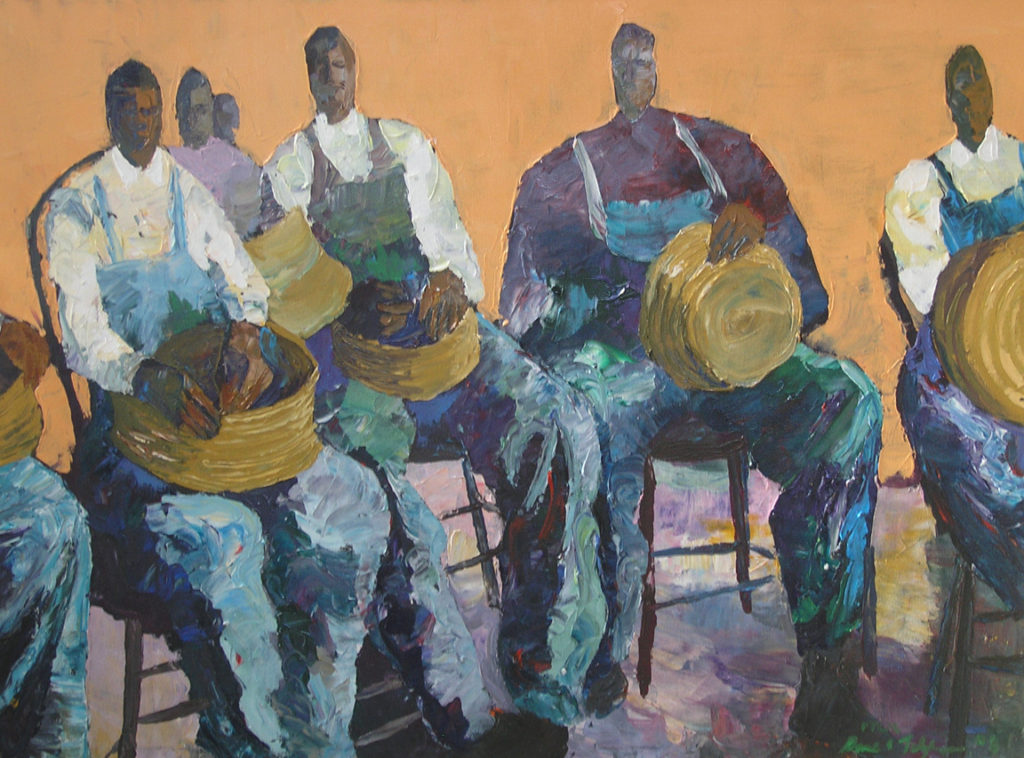 Most of the work in show is in acrylic, which Tilghman now gravitates to. He explains: “When I was doing pencil and water color, I thought I was limited to realism. I could do somewhat impressionistic stuff. I could do the ‘tall tale art’ stuff, but I couldn’t do texture.”

Next, we turn to the stunning “On a Dusty Road,” depicting four figures in a wagon passing through a field on a dirt road. Here Tilghman has dug into texture, wielding his paint with modeling paste to create wheel ruts that stand off the canvas with evocative power. 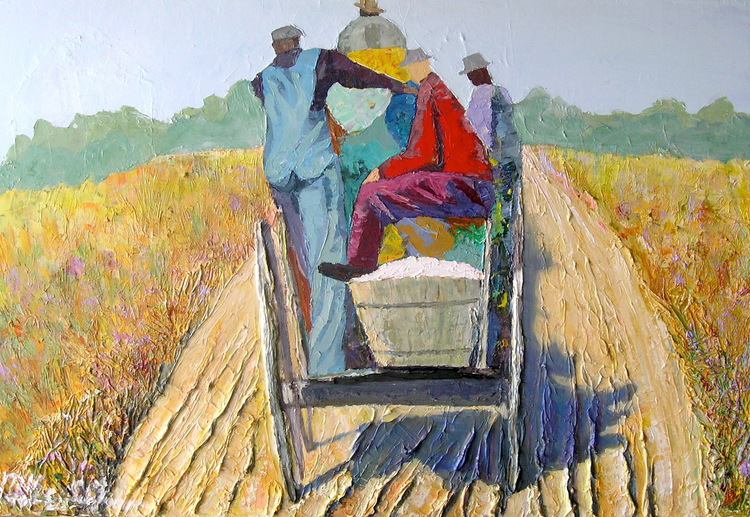 The addition of modeling paste adds to the imapact of ruts in “On a Dusty Road.” (Courtesy of the artist)

As we step back from the paintings, Tilghman shares his drive to retell the stories he has encountered in photographic images of the early 20th century. He recalls playwright August Wilson telling an awards ceremony audience that we stand on the shoulders of those who came before us. “I say these people live, they were here, they made their mark even though they weren’t famous. They made a difference to somebody. It is my job to tell their stories,” he says.

“It helps me to connect again with my history, my ancestry” he continues. “My dad used to tell me about my grandmother and his brothers and sisters. He was full of a lot of stories, and I think that’s the foundation for my art, knowing that he was honoring them just as much as I’m honoring these people.”

“Just Talking” continues at Art for the Soul through March 31 with 17 paintings for show and sale. Prices range from $750 to $14,000. A generous selection of framed prints is also available with price from $30 to $110. You can see more of  Tilghman’s work at Multicultural Art.

Shakespeare Is Alive and Well in Longmeadow

Lisa Ruch, Ph.D., is an academic and a medievalist with a penchant for comparative literature. She’s spent a lot of time in the hallowed halls of learning pursuing such arcane subjects as Arthuriana, paleography and “the vague line between legend and history in the Middle Ages.”

But Ruch is also quick to tell me that Shakespeare’s plays “Hamlet” and “Much Ado About Nothing” are available to the reading public in Klingon. Yes, Klingon, the made-up language of “Star Trek’s” truculent Worf. (Kyle Kallgren has that story at “Brows Held High.”)

Perhaps it’s Ruch’s penchant for bridging antique thought and contemporary culture that has her a two-season favorite with an adult reading group at Longmeadow’s Storrs Library.  Back by popular demand, the assistant dean of the School of Liberal Studies at Bay Path University is finishing up a six-session series on the works of Shakespeare this month.

Acknowledging that that the bard is a tough sell for some people today, Ruch draws a contemporizing comparison. “When he was first produced, people weren’t going to see the greatest writer in the English language,” she says. “They were essentially going out to the movies.”

Shakespeare is apparently alive and faring well with Ruch’s touch. The group numbers as many as 20 people. Many have hung in for the whole series. And they range in age from 30s to 80s.

On March 19, Ruch and her readers will be discussing “Pericles.” A bit obscure? Yes, but one of the bard’s most popular plays during his lifetime. “It’s a crowd-pleaser, a soap opera, a silly adventure story,” she says. And it has one of her favorite motifs in literature – “I thought you were dead and you’re not!” 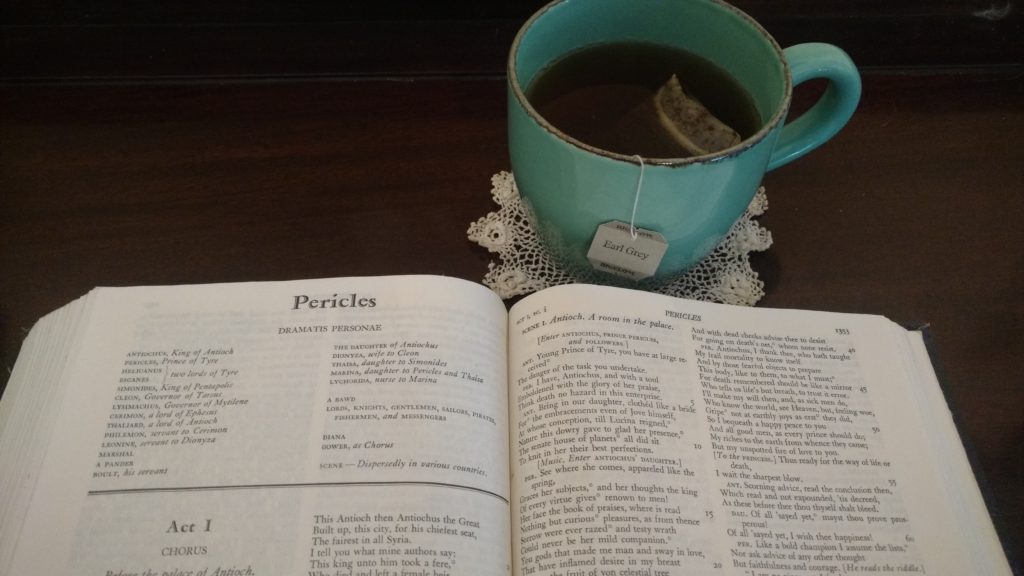 Another draw for the reading group is that no one has to dust off old college texts to engage. “Some people are just listening to it in the car on the way to work,” Ruch says. Others are watching videos. Grant funding ensures that the library can supply everyone with the material in multiple formats. “Not everybody has the same thing – that’s part of the joy,” says Ruch.

However, some people do bring blast-from-the-past college texts and happily compare their notes.

And – no pressure. Some people have notes and ask a lot of questions, Ruch says, but “others just sit back and let it wash over them.” Everyone is invited to catch a wave at the final session March 19 from 6:30 to 8 p.m