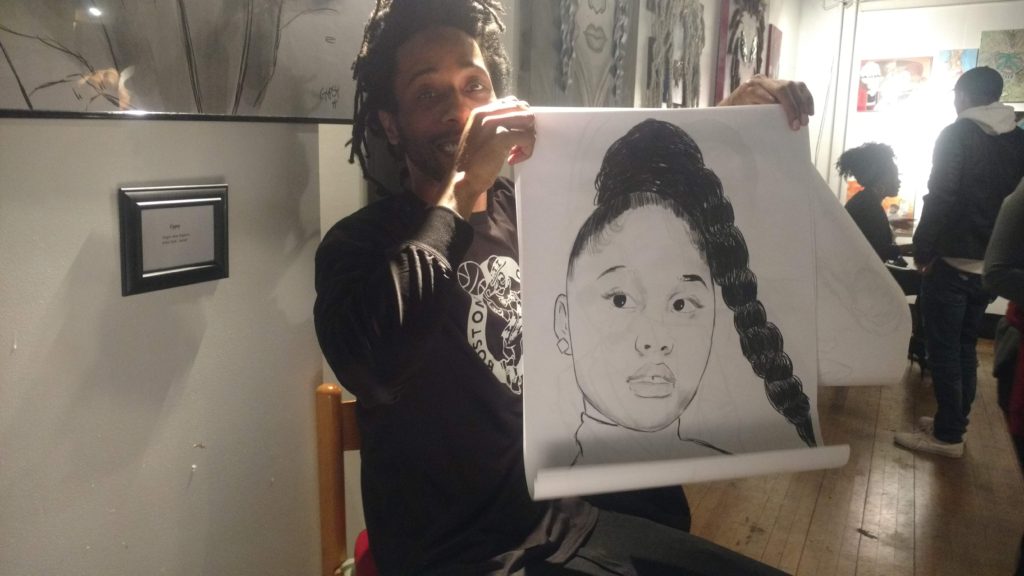 Artist and clothing designer Gypsy is optimistic about opportunities for creatives taking root in Springfield. (Linda O’Connell for WMassP&I)

SPRINGFIELD—Flowers are raising their heads outside my window. Last Friday, the city’s artistic community bloomed downtown. I like this eventuality: April showers, then May flowers with promise.

The artistic flowering was the Art Stop(s) celebration showcasing Springfield’s emerging creative scene. Organized by the Springfield Cultural Partnership, the three-hour event comprised an outpouring of the city’s artists and their work in downtown’s art galleries, pop-up galleries set up in downtown buildings and other locations including Make-It Springfield on Worthington Street and the Valley Venture Hub on Bridge Street. Visitors strolled among the venues as street performers buoyed the mood on a misty evening. 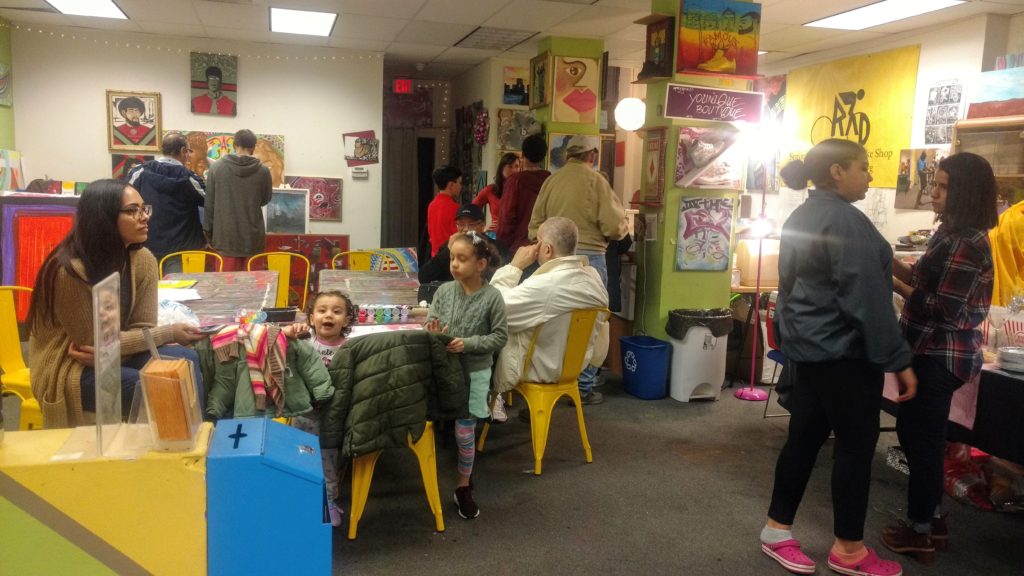 The third annual Art Stop(s), on which the fledgling Artists of Springfield collaborated, underscored a point that arts advocates increasingly make: There’s a significant creative community growing in Springfield that’s still not highly visible within the city or in the artistic community in the Pioneer Valley. Time to change that.

I made an eclectic sampling of the Art Stop(s) offerings, digging into the venues that most intrigued me. I met powerful artists and encountered stimulating art.

The Words of Wisdom Art Studio on Chestnut Street teemed with a strong community vibe, with artists at work on sketch pads around the funky front room. Attracting my attention with an embracing portrait sketch was Gypsy, a rapper turned clothing designer whose portraits adorn some of his clothes. Born in Springfield, Gypsy only recently returned after a peripatetic life starting in childhood. He’s sticking around now, he says, “because there are a lot of opportunities burgeoning here.”

In Florida, Gypsy encountered the Art Basel Miami Beach art festival, one locale for the renowned international showcase that features contemporary art masters and meaningfully promotes emerging artists. “Springfield can make its own version of that,” he offers. Gypsy sees the Words of Wisdom studio as “the hub” for an emerging future. His vision and optimism are infectious.

Moving deeper into the capacious shotgun-style space, I encountered an openly political painting depicting children with a menacingly outsized Donald Trump. At my elbow inquiring if I like the piece was a young artist in a suit jacket over a cool red hoodie framing his chest-length dreads. 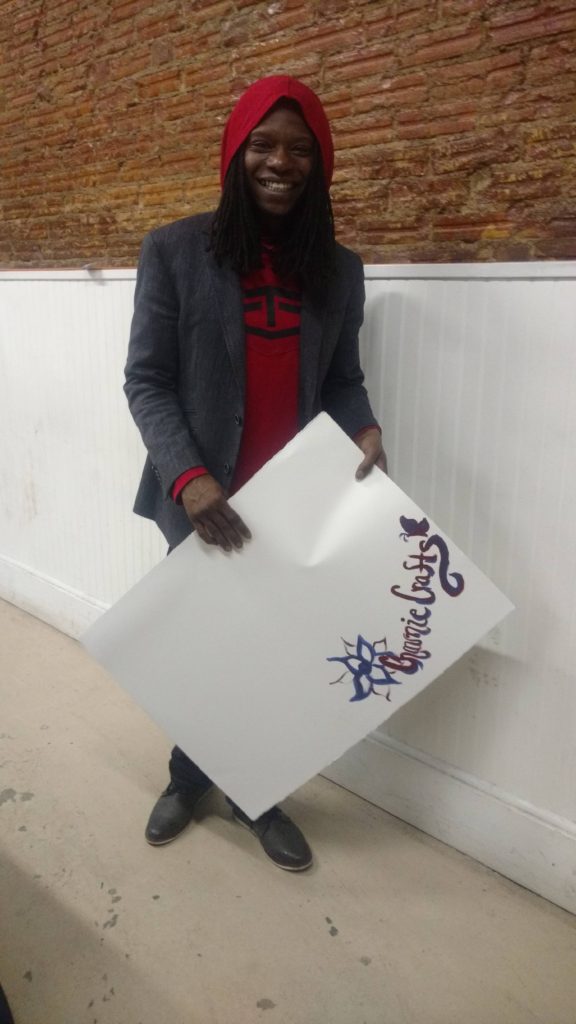 Chris Agyei opened W.o.W. studio last June. He’s Springfield all the way. “I went to Duggan, Sci Tech, STCC and Porter and Chester,” he said, majoring in psychology and criminal justice in college. “I know. Isn’t that what everybody does?” he noted, smiling.  At Porter and Chester, he studied automotive technology. But he has followed his childhood passion for drawing and now teaches art at the Springfield Public Schools’ Liberty Preparatory Academy. The auto tech is only for friends.

Agyei said he founded W.o.W. “to uplift the community.” He articulates the mission of his collaborative space on the studio’s Facebook page: “It is important for us within the community to use the arts as a pathway to create platforms which further opportunities and development of wealth.”

I vowed to return for more of this story but, mindful of time, headed out, touching base on the way with 19-year-old photographer Briana Serrano of Chicopee, a first-year student at Bay Path University who was chosen through Art Stop(s) call for artists, and Chaunacey, a W.o.W. artist who was sketching in a corner flanked by a wall of work in her free-wheeling range of styles. 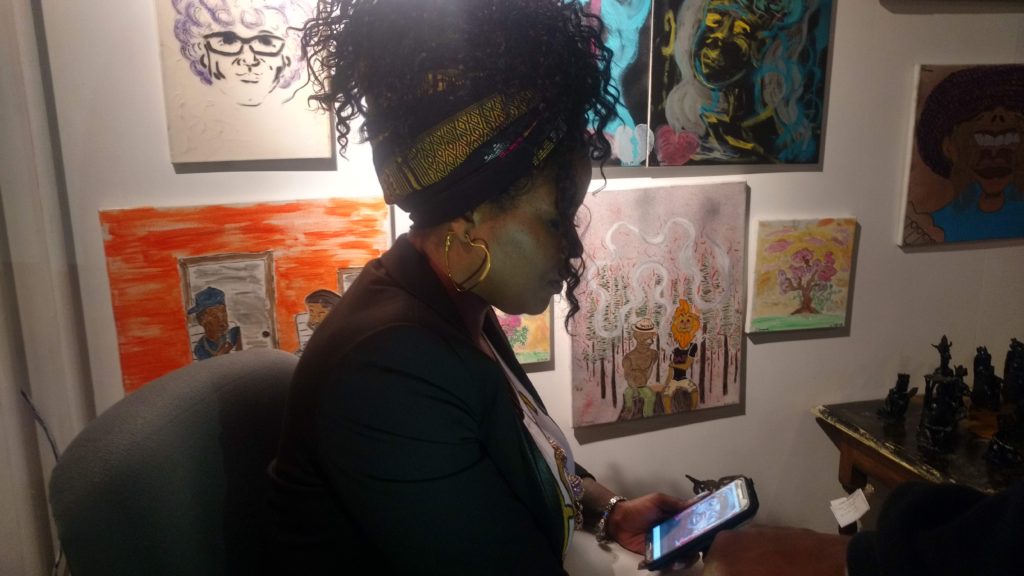 Chaunacey works on a sketch at W.o.W Art Studios. (Linda O’Connell for WMassP&I)

Down on Main Street, there was a sprinkling of map-wielding walkers in small groups, but the sidewalks weren’t bustling. I wanted more Arts Stop(s) signage to make wayfinding breezier. Quibbles aside, I enjoyed a public perk of the event’s concept—a chance to view art in the classy studios of New England Public Radio at 1525 Main Street in the former Springfield National Bank building.

Besides the impressive vintage vault in the space, an unexpected treat was an ornate wood paneled room that hosted Springfield National Bank’s “private bank for women,” where women could be about the indelicate business of money in modest privacy. Thanks to the station’s creative staff for sharing.

NEPR’s Art Stop(s) attraction was painter Catherine Adams Burton with “Discombobulated,” a descriptive set of works rendered in bold black outlines and assertive primary colors. A Springfield resident for 38 years, Burton confessed to being an introvert, although she was willing to encourage art-seekers in what she perceives “as a growing awareness” of the Springfield arts scene. “I believe it will grow more,” she said. “People are very receptive.” 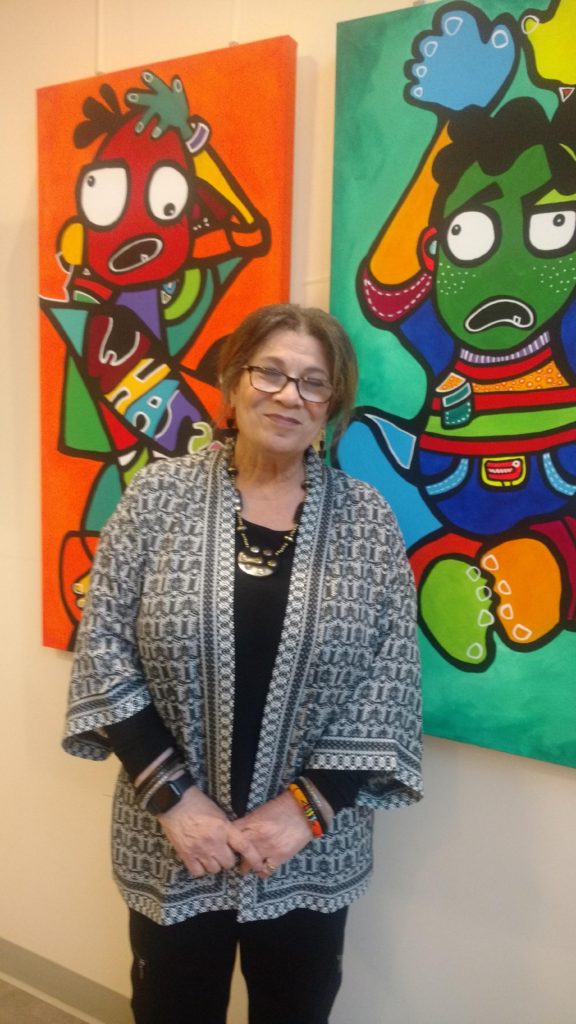 Around the corner outside Make-It Springfield, which serves an expanding group of makers and creatives, story-teller and puppeteer Ken Harris greeted visitors with a shadow puppet show featuring handmade figures in a homemade cardboard box theater. He warmly broke down the components of the art form for some attentive kiddos—just the kind of interaction that makes a maker’s heart warm. 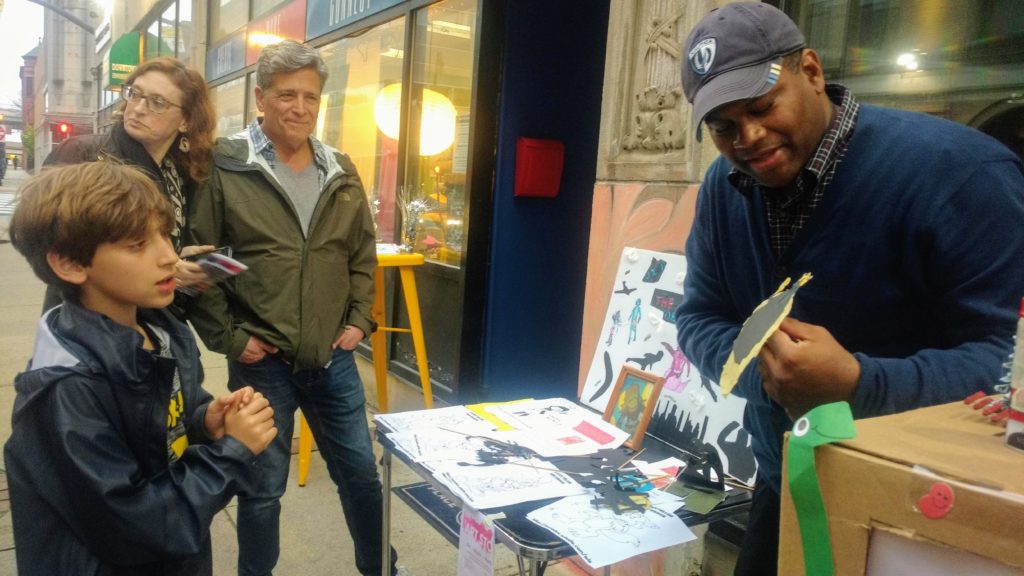 Ken Harris explains the craft of shadow puppets to visitors outside Make It Springfield. (Linda O’Connell for WMassP&I)

Nipping across the street to 1550 Main Street, I encountered the intricate, disciplined mandalas of invited artist Jennifer Delgado on the main lobby wall. I was struck by how the mathematically resonant pieces complemented the perpendicularity of the building’s interior lines. Also at 1550 Main were works by students in STCC’s Visual and Performing Arts program. The digital image of frolicking cow, both consuming and adorned by daisy petals, by Goddessah Reyes commanded my attention with its piquancy. 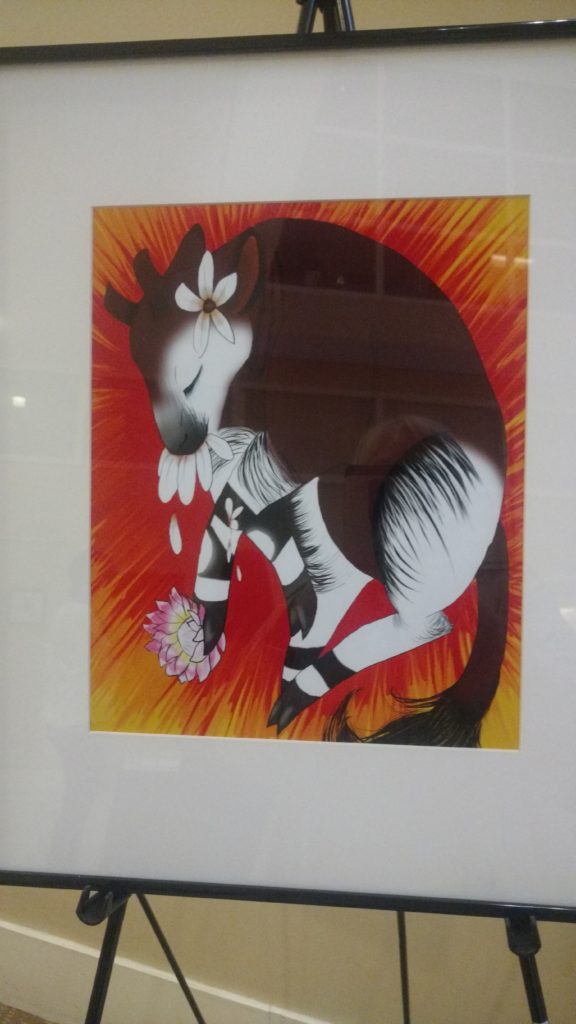 I didn’t make it to the art arrayed at 1350 Main Street complemented by stilt-walkers on the street, but I did catch the simple, beguiling work by several of the Springfield Museums’ teaching artists at the Museums’ Blake House Café on Edwards Street.

Dominated by still-lifes, the work was tastefully displayed on easels and attended by sitar music. The Polish cut paper folk art, wycinanki, was represented by teacher Susan Urban, a West Springfield artist who seemed delighted to share her odyssey to Poland to perfect the art of her grandparents’ native culture.  Eliza Moser’s oil on canvas photo realism was especially compelling for its precision nod to classical techniques she honed in Florence, Italy. Moser works from her studio in Springfield.

Creating a contemplative mood for work of the museum’s artists were the sitar stylings of Robert Markey. The Ashfield artist, whose mosaics light up the walls of the Dwight Street railroad underpass, struck a fitting chord for me in his lived devotion to beauty—which we all know is truth. 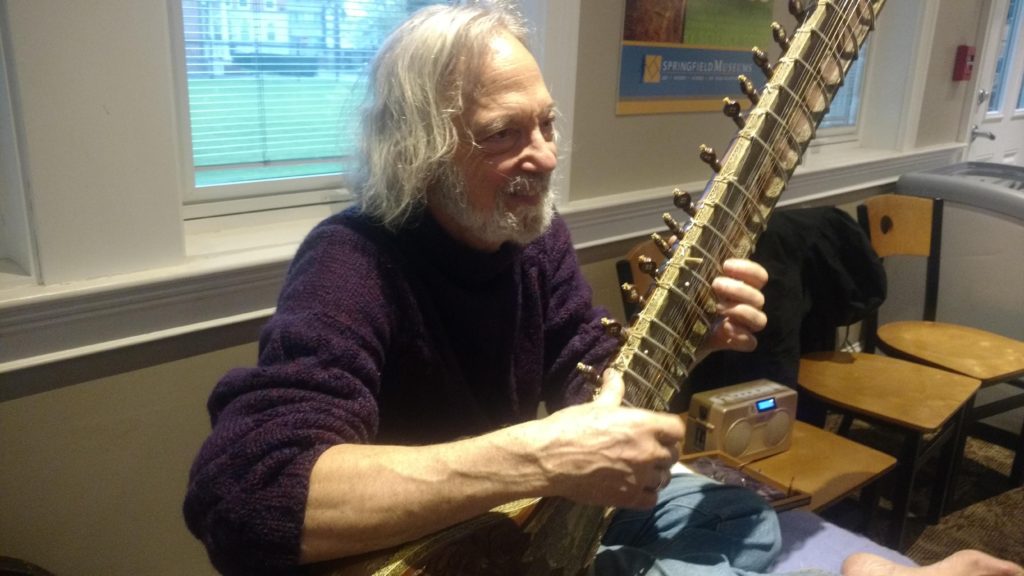 Markey spent his undergraduate years at MIT immersed in physics and math “because they were just so beautiful.” He wasn’t interested in their practical application, though. Instead, he followed a path that led to construction work, wood sculpting, social activism in Central America, teaching computer science at HCC, expansive visual art and the sitar. “Art became my focus,” he said. “Music keeps me sane.”