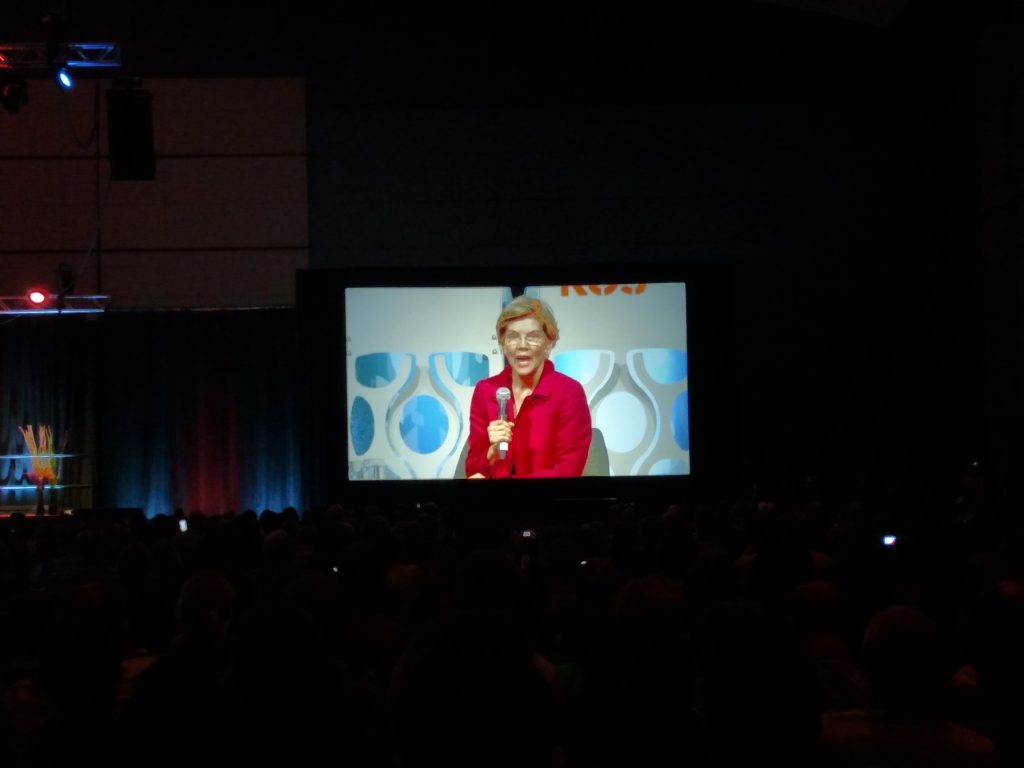 “Let the little Netroots come to me…” Elizabeth Warren at Netroots in Philadelphia. (WMassP&I)

PHILADELPHIA—For years now, United States Senator Elizabeth Warren has been a staple of Netroots Nation, an annual gathering of progressive political activists. Her earliest visits talked up the Consumer Financial Protection Bureau, the financial product regulator Warren successfully lobbied to include in the 2010 financial reform bill. This time was a little different.

On Saturday, during the Netroots Nation presidential forum, it was clear how much love she has banked from this group. All attending White House aspirants—New York Senator Kirsten Gillibrand, former Housing & Urban Development Secretary Julian Castro, and Washington Governor Jay Inslee—had their applause lines. But during a riff about potential human rights abuses along the border, Warren received the grandest of ovations, partly for one particular flourish.

“You break the law of the United States of America,” she said, when officials physically, sexually or negligently abuse immigrants. “And Donald Trump may be willing to look the other way, but President Elizabeth Warren will not.”

This is largely par for the course for Warren. But it was the first time she addressed the conference as a candidate for president. Warren won hearts here long ago with her wonkiness and holds them with her parade of plans. 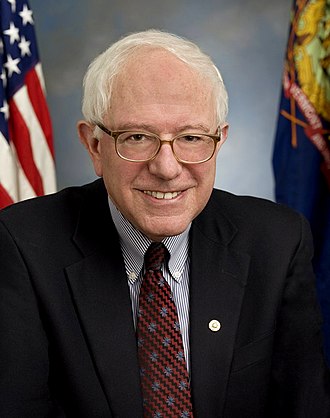 Bernie Sander worry about connecting with activists? “Fuhgeddaboudit!” (via wikipedia)

But why is Netroots Nation her territory and not her colleague and rival Bernie Sanders of Vermont? First of all Sanders skipped the conference. The Washington Post’s Dave Weigel argues it wasn’t fear or beefs, but rather a calculation.  Sanders will be in town Monday for a rally to oppose the closure of a hospital. But Netroots may fit Warren’s practice of politics better.

Many here were on New York Rep Alexandria Ocasio-Cortez’s side amid her “feud” with Speaker Nancy Pelosi Although, Donald Trump’s latest Twitter bombing may, despite old adages wrong, prompt intra-Democratic peace. Yet, Netroots is not a disestablishmentarian enterprise. Party stalwarts, consultants electeds, and their staff mingle and mix with the crowds and panels of activists, organizers, and reformers.

NBC News’s Alex Seitz-Wald observed that Warren has synched her Senate work with progressive group’s efforts. It mirrors the hand-in-glove approach she took to save the CFPB in 2010. Sanders, by contrast, usually goes off on his own. Seitz-Wald adds that Warren also tends to the personal minutiae of politics that Sanders ignores.

Netroots Nation is very much an Elizabeth Warren crowd and not quote a Bernie Sanders one — they're different!

She just took stage to a standing-o, chants. He's not here.

She's been coming for years. (I first met her at Netroots in 2012 in Providence.)https://t.co/4p1oDHgnSd

The room at @PplsAction, for instance, was much more working-class, diverse, less-professional.

Progressive mvmt not a monolith! https://t.co/uhAk10ITr1

Both Seitz-Wald and Weigel note segments of the progressive movement are more eager to back Sanders.

Warren freely ladled up policy Saturday, but how she did it, and campaigns generally, explains her rise in the polls.

Warren spoke about education, breaking up Big Tech, the Supreme Court, and of course, immigration.

While discussing antitrust actions against Big Tech, Warren got her wonk on, breaking down the online monopolism Amazon enjoys. The online behemoth accounts of 49 percent of online retails sales, she said. Wal-Mart, by contrast, only has nine percent of brick & mortar retail sales.

Smiling for long? (logo via wikipedia)

Where Amazon rigged the system, she said, was it was often both a platform for other retailers and a competitor to them. After letting a store set up shop—Warren used pet cookies as an example—on its platform, they would harvest the data. Then Amazon would open its own pet cookie store and consign the original vendor to the bowels of amazon.com. She would make Amazon choose whether it is a platform or a retailer.

Warren also, yes, has a plan soon to address another aspect of the retail apocalypse: private equity and hedge funds ownership. The issue came up Saturday, though it was posed to Secretary Castro. He gave a stock “regulate the banks” answer.

Responding to a question about the Supreme Court, Warren was leery about restructurings that could only politicize the Court further. Rather, she said Congress should act to affirmatively protect abortion rights, fortify unions, and halt gerrymandering.

By far the most powerful moment came on immigration. The subject came up after protesters—Netroots is famous for such happenings—raised a banner condemning deportations.

“I come from a tradition of witnessing,” she said as she described her visits to migrant detention facilities. Warren had earlier released a plan to make illegal crossing of the border a civil offense, introduce a pathway to citizenship, and enshrine an end to family separations in law. 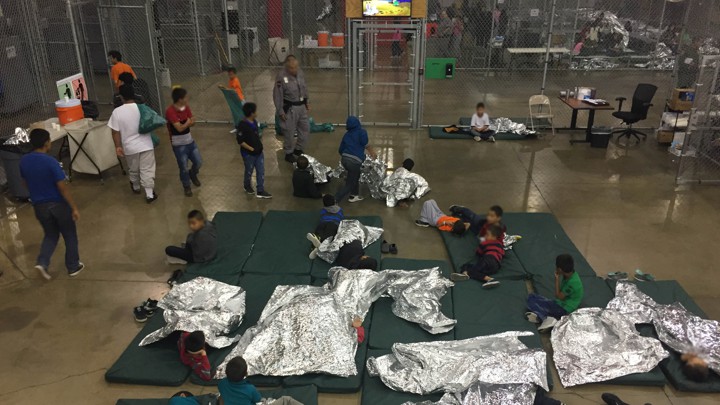 Warren did not have the earnest emotional lane to herself, though. Senator Gillibrand, who is having a moment after rightly explaining the difference between white privilege and general economic insecurity, revisited that on stage. She expanded on those remarks, discussing the higher risk black teens and young adults have of getting shot or facing discrimination.

Throughout, Warren projected that folksiness she has ably used since her earliest days as a pol.* Describing her support for marijuana legalization—it’s principally a social/criminal justice issue—she said it was not “for those you who think it’s fun” and “not just for the mellow folks in the back.”

As early as 2011, Warren got a rap for being unrelatable.

The media has largely backed off this idea, but the fumes of that bad take linger.

Rather, Warren has people skills, both person-to-person and before crowds. It may not always be “mellow” humor. However, the exuberance and human touch come from the same place. After a rocky start to her pre-campaign last year and her actual campaign this year, Warren is hitting her stride.

For people already down on Warren, the magic doesn’t work. But for those who like her generally, if vaguely, those selfies—35,000, Warren notes—can seal the deal.

What the plans prove is that there is substance behind the charm, something many pols lack.

Warren does face challenges in her presidential quest. None of them were apparent at Netroots. Her biggest threats, Sanders, former Vice-President Joe Biden, and California Senator Kamala Harris, were not in Philadelphia. Aside from Sanders, who primarily presents a mathematical problem because of similar voter bases, Biden and Harris underscore how the problem is not her weaknesses but their strengths.

Polling is increasingly showing that Warren has been doing better against Trump. But Biden presents an option that may bring in more moderates—including within the Democratic primary. He also attracts elements of the party coalition that are drawn to his association with former President Barack Obama.

Harris’ background as a prosecutor has attracted opprobrium, but her Judiciary perch and joust with Biden last month show she can take on tough opponents. That is helpful not just for Trump, but when parrying bad actors in Washington or abroad.

If Warren has any weakness likely to make a real difference, it may be fears of losing her in the Senate. 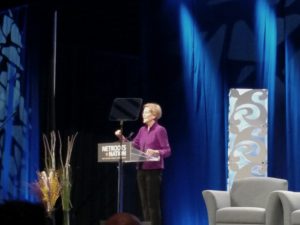 Netroots depicts how far she has come over the last decade. While hardly the only reason—Massachusetts voters were obviously a big factor—this group’s support helped her create the CFPB. They donated to her campaign. Her visits to Netroots return the favor and explain how a Harvard Law Professor became a top-tier presidential candidate.

“People in this room fought back,” she said, recalling the CFPB fight. “In the end you don’t get what you don’t fight for.”

“It starts by getting in the fights we believe in,” Warren continued, to uproarious cheers.