A Changing Ward 4, an Open Seat, & Lots of Choices… 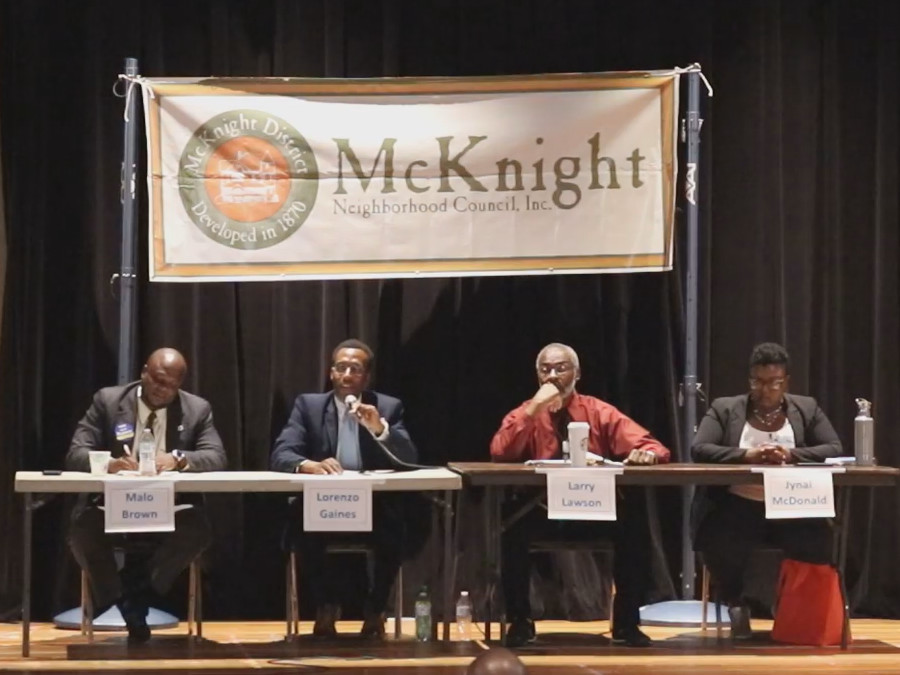 SPRINGFIELD—The retirement of E. Henry Twiggs from the Ward 4 Council seat has kicked a spirited race in the heart of the city. There are other contests for the municipal legislature. Yet, between the longevity of Twigg’s tenure—he has served since ward representation returned in 2010—and the subtler shifts within in the ward, Ward 4’s contest could reveal a lot.

A venerable city civil rights leader, Twiggs has faced electoral challengers. However, his firm support overcame them while papering over subtle shifts within the ward itself. A quarter century of dogged neighborhood activism and demographic trends has changed Ward 4 perhaps more than any place in Springfield outside the casino zone. That presents a prime background for an open seat race.

The candidates in the race are, to some extent, familiar to city politicos. Among them are legislative aide Malo Brown, businessperson Lorenzo Gaines, activist Larry Lawson, community and union activist Jynai McDonald, and George Savage.

Ward 4 consists of McKnight, the Old and Upper Hill neighborhoods, and parts of the Six Corners and Bay areas. It is anchored by Mason Square. 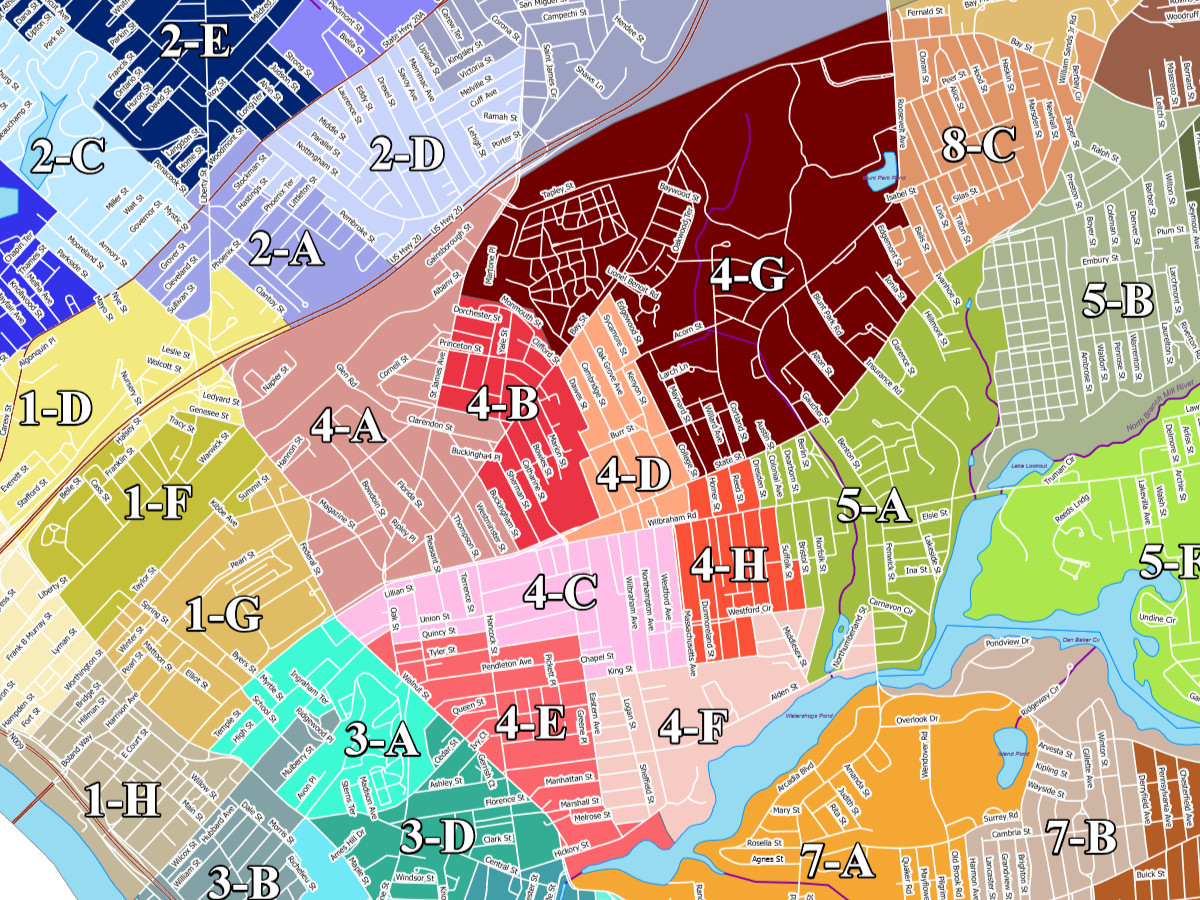 Ward 4 in Springfield colored in reds, pinks & maroons by precinct. (via Mass. Sec of State)

The preliminary on September 10 will shrink the field to two who will compete in November. City handicappers the chances of Brown, who is Rep Bud Williams’s legislative aide, and McDonald, the Family Childcare coordinator for Service Employees International Union, Local 509. Their campaigns have enjoyed visible and broad support.

By comparison, Savage missed the McKnight Neighborhood Council’s August 27 debate and Lawson has a reputation as an eternal perennial candidate. Lawson dryly acknowledged this at the debate, noting his consistent losses.

Gaines knows he risks the same reputation. He has sought city office before, unsuccessfully. His most recent campaign was sidelined after his son nearly drowned in a pool. In an interview, however, he argued the open seat was a perfect fit.

“I know what the issues are,” Gaines said. Pointing to his contacts in the ward, he added, “My whole campaign is about relationships.”

Indeed, at the McKnight debate he rattled off names of residents and spoke with authority on many issues. 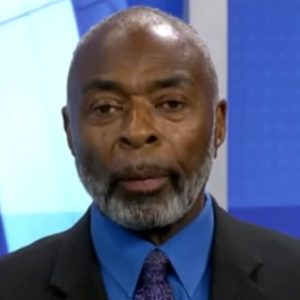 Larry Lawson in 2016 (via still from Youtube/WWLP)

In conversations with some candidates, it is clear relationships are key. The preliminary could come down to mobilizing supporters, but the connections candidates enjoy could deliver victory for whoever advances to November.

Lawson could not be reached and Savage did not return an email requesting comment.

In a phone interview McDonald stressed her ground game. She said she has been knocking on doors for some time. In addition to her work on police-community issues, McDonald unsuccessfully ran at-large two years ago. However voters recalled her campaign and, consequently, many are favorably disposed toward her.

“More people than I expected had heard about me or remember me from 2017,” she said.

As is common ward races, residents are emphasizing hyper-local concerns. For example, McDonald highlighted the need to clear and/or rehabilitate blighted properties and sidewalks. She also sees potential in the Council’s decision to earmark a portion of marijuana taxes for neighborhood development.

American International College sits in the heart of Ward 4. Springfield College and STCC are not far away. (via aic.edu)

Ward 4 is also home to or near several of the city’s institutions of higher education. She would like to see more engagement with them. Beyond building bridges with their neighbors, McDonald also thinks the colleges could play an indirect community investment role. While they do not pay taxes, the school do pull construction permits. Some of that revenue could finance trusts that fund neighborhood improvements.

At his kickoff last month at the Cozy Corner, Brown touched several subjects. In an interview with WMassP&I, he underscored micro issues like helping the elderly clear litter from their sidewalks and yards.

Following a parade of speakers, Brown told the crowd crammed into the facility’s indoor bar, that his opponents have many ideas. Yet, he suggested, they have no plan to implement them. He argued he could.

“How are you going to do it?” he asked rhetorically. Speaking for himself, Brown continued, “I’m up for this challenge.” 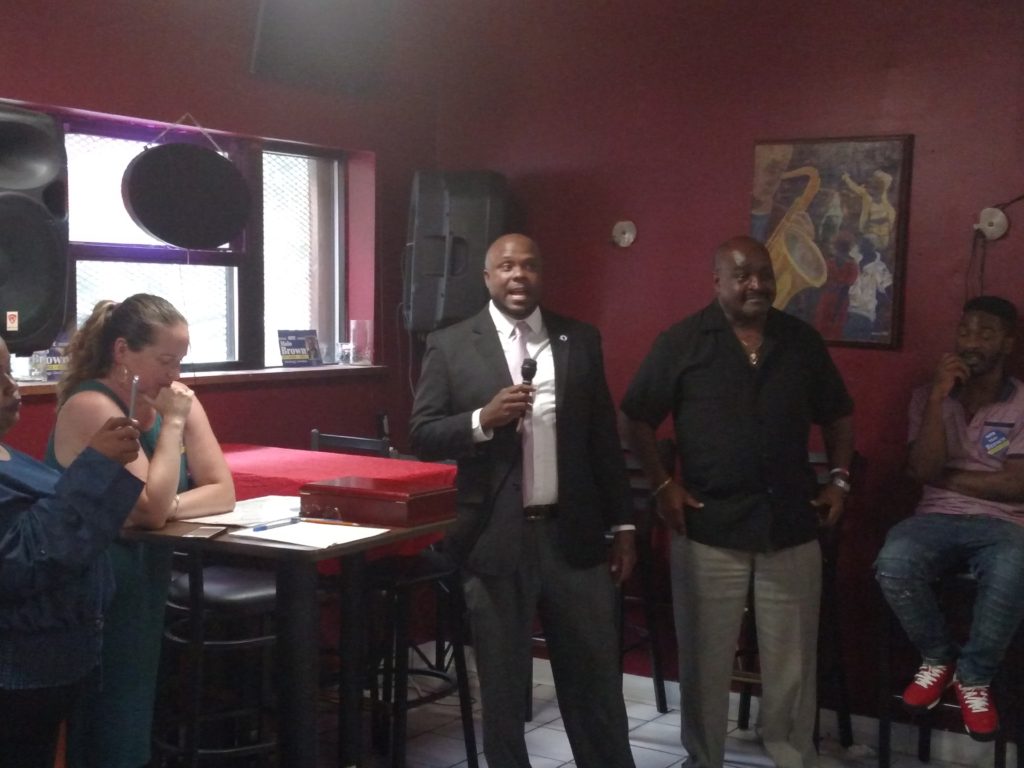 Malo Brown addresses supporters on August 13 after phalanx of speeches, including from his boss Rep. Bud Williams, at right. (WMassP&I)

Throughout the campaign, Brown has leaned heavily into work for Williams. During the McKnight debate, he featured it in several answers.

In short, Brown argues he can accomplish more for Springfield, especially where local and state government meet. That comes, he said, from a background in activism—including working alongside his perhaps better-known brother Dejuan and sister-in-law Chelan. Having been at Rep Williams’s side for nearly three years now he can help the community realize many of its goals.

This is not ground McDonald will cede, however.

“I have very similar experience,” she assured. “I was just in Boston last month testifying on behalf of a bill,” as part of her job she said.

“I’m not just at the state house, I am in the room that is creating the legislation,” McDonald continued. This was in addition to building coalitions and running trainings. 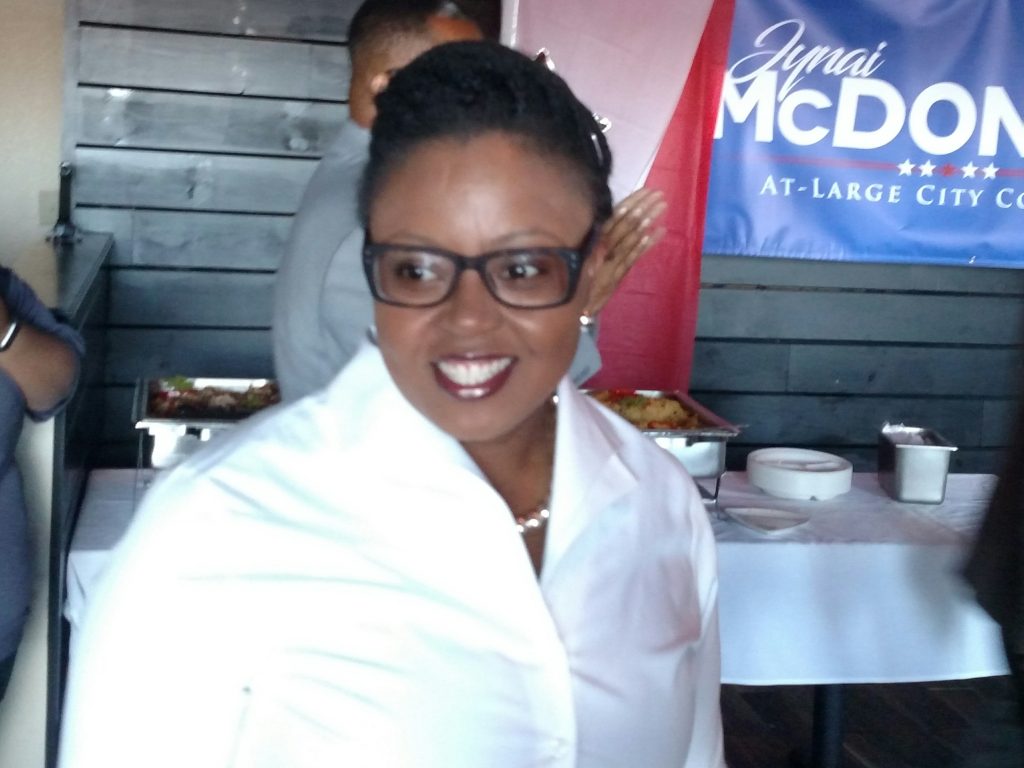 Plus, she again points to her prior run as a key distinction from Brown. She has been the campaign wringer where he has not, McDonald observed.

Not surprisingly, both McDonald and Brown enjoy a slate of endorsements. Williams—obviously—and his predecessor, Ben Swan, are backing Brown along with School Committee at-large member LaTonia Monroe Naylor. At-large councilor Jesse Lederman, who grew up in the ward, and Twiggs are behind McDonald as is at-large councilor Justin Hurst.

But endorsements are certainly not everything. Gaines correctly noted that that community ties and connecting with voters will be paramount. He went further at the McKnight debate, indirectly knocking his opponents’ big-name support

“I don’t owe anyone any favors,” he said in response to a question about representing the entire ward.

Although the city’s turnout is depressingly law, those who do vote, often take their selections very seriously. Gaines said he has noticed more activity among neighborhood groups like among the Hill neighborhoods and Bay area. That presents opportunity to candidates putting in the work. 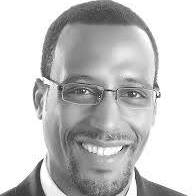 “The ward is getting stronger and more engaged,” Gaines said.

Historically, identified as the heart of black Springfield, Ward 4 has diversified along with the rest of the city. While Latinos there are not as organized as in Ward 1, they are a potential pool of voters. Most of the campaigns appear to appreciate the potential of outreach to Ward 4’s various sectors.

Then there is the McKnight Historic District, which probably leans a little more affluent than other parts of the ward. Plans to finally build a rail trail along the former Highland route, which cuts across the ward, could attract people of all persuasions seeking big, historic homes but want urban resources and amenities.

None of this happened overnight. People in the ward, and McKnight specifically, have pressed for investments and pitched the area to homebuyers and investors. They did so with minimal help from City Hall. Still more work remains around transportation, housing and recreation. 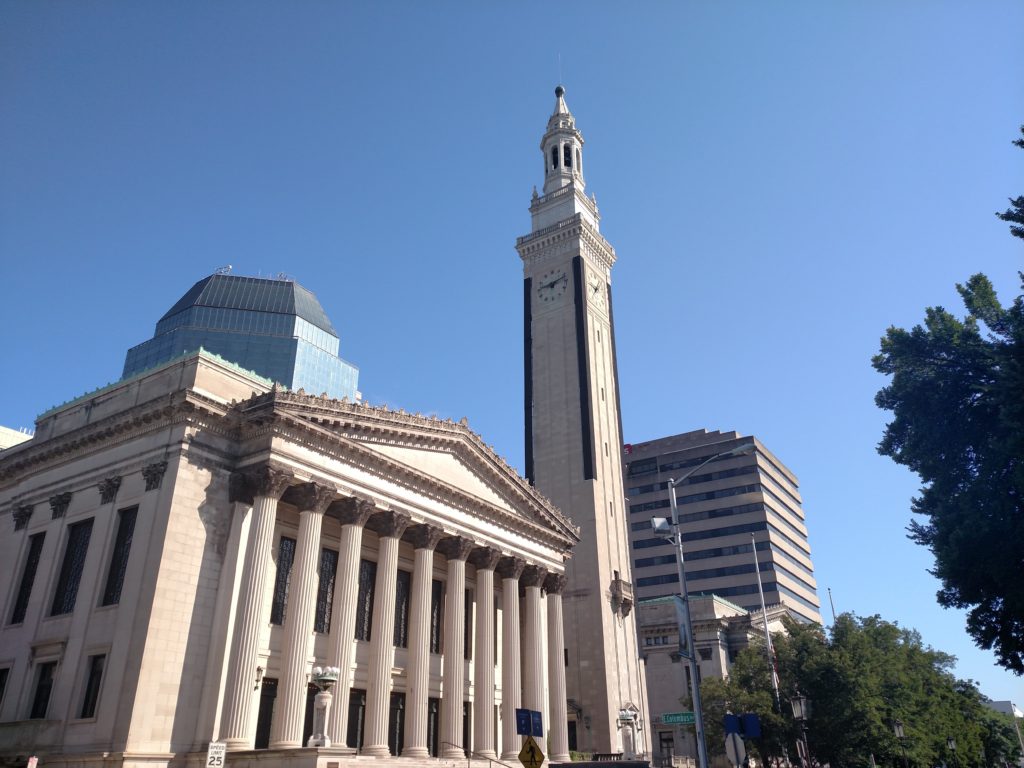 To make it here… (WMassP&I)

Part of Twiggs’s strengths over the years was his participation in the neighborhood’s transofrmation. The next councilor the ward’s residents elect will have to maintain his tempo. They may need to go even further as Ward 4’s needs evolve.

Twiggs was able to keep voters’ confidence during his 10 years in office. Over the same period, however, Springfield residents elsewhere have not hesitated to turf underperforming ward councilors.