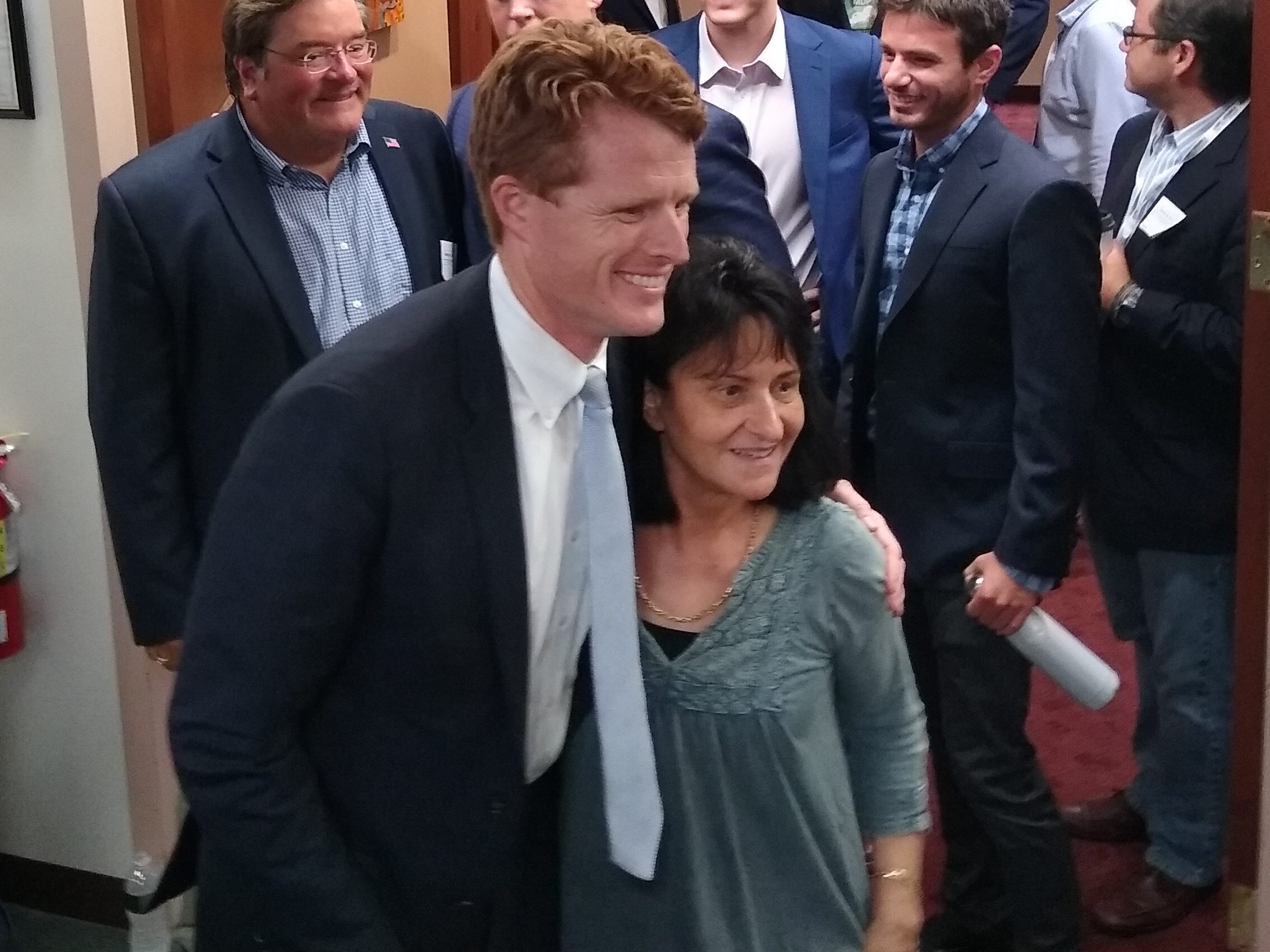 Joe Kennedy, in Springfield on Saturday, coming a campaign stop near you? (WMassP&I)

US Representative Joseph Kennedy, III, a scion of the storied Massachusetts political family, has been toying with a US Senate run for some time. Last month, his efforts, including a poll testing him against incumbent Senator Ed Markey, were unmasked. Since then, Kennedy has toured various locales across the commonwealth, including two stops in Springfield. Now, he is going for it.

Earlier on Wednesday, The Boston Globe first reported that Kennedy will kick off his campaign for Senate in East Boston this Saturday. Media reports have noted the significance of the location. Though rapidly gentrifying, the neighborhood is among the city’s last redoubts of working-class Boston. But it is also where members of his famous family first landed in the United States.

Markey, having sensed the challenge coming—and cannily acting to discover the source of Senate polling—has been staffing up. Both establishment Democrats and many progressive Democrats have lined up behind him. Markey had been rallying the troops ever since labor attorney Shannon Liss-Riordan and businessman Steve Pemberton entered the race. But when the threat of Kennedy materialized, Markey recruited top political talent to man (and woman) the barricades. 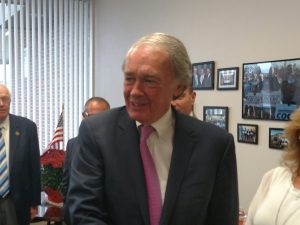 Supporters say Markey’s new challenger is to his right. (WMassP&I)

Kennedy will almost certainly be making a generational argument. Markey, 73, was first elected to Congress four years before Kennedy, 38, was born. After 36 years in the House, Markey took the Senate seat John Kerry had vacated to become Secretary of State. Kennedy was first elected to the House in 2012.

While some on the left bemoan, with some justification, that Kennedy’s record is less reliably progressive than Markey, the former has some considerable advantages. It comes with instant name recognition and the power of nostalgia, especially among older Democrats. Moreover, while Markey is no cultural reactionary, Kennedy has taken a lead on several prominent social issues like LGBTQ rights.

That alone does not explain Kennedy’s calculation, however. While a legislative maven for longer than Elizabeth Warren, Massachusetts’s senior senator, Markey is less well-known than his professor-turned-pol colleague. As Kennedy’s granduncle, Edward Kennedy, was more prominent than Kerry, Warren has a higher profile than Markey.

Like many top Massachusetts Democrats, Warren has endorsed Markey for re-nomination. Though she has declined to malign her former law student. 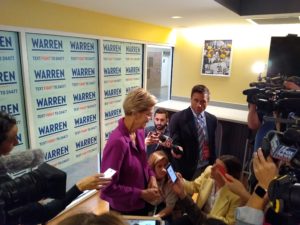 Sen. Warren meets the national and state press before hitting the stage at the Democratic convention in Springfield. (WMassP&I)

Last Saturday, before she addressed the Democratic Convention in Springfield, she deflected reporters’ questions about her former law student’s then-theoretical challenge.

Even if Kennedy starts out with these unusual advantages for a challenger, there is a sense Markey could chip away with a siege campaign. That would manifest in an emphasis the elder pol’s record and shows of force like the one on the convention floor of the MassMutual Center.

Kenendy’s strategy, by contrast, appears to take some advantage of Markey’s lower profile. His earlier Springfield visit to the Paramount was a chance to meet inner-city luminaries who owe little allegiance to Camelot or the establishment left. During that visit, he likened Springfield, and its needs, to Fall River, which partly falls into his district.

Kennedy did not address the convention—as a sitting federal Massachusetts official, he had that right. However, he did moderate a panel that featured Holyoke Rep Aaron Vega on race and equality.

Shortly after the convention formally concluded, however, Kennedy greeted curious politicos at 1350 Main Street across from the MassMutual Center. State Senator Eric Lesser, whose relationship with Kennedy dates to Lesser’s time as a White House aide, introduced Kennedy at the event. Kennedy gave brief remarks and then moved around the room to chat with attendees individually. Those remarks somewhat echoed Lesser’s, who had touched on the 413 often being forgotten by the state. 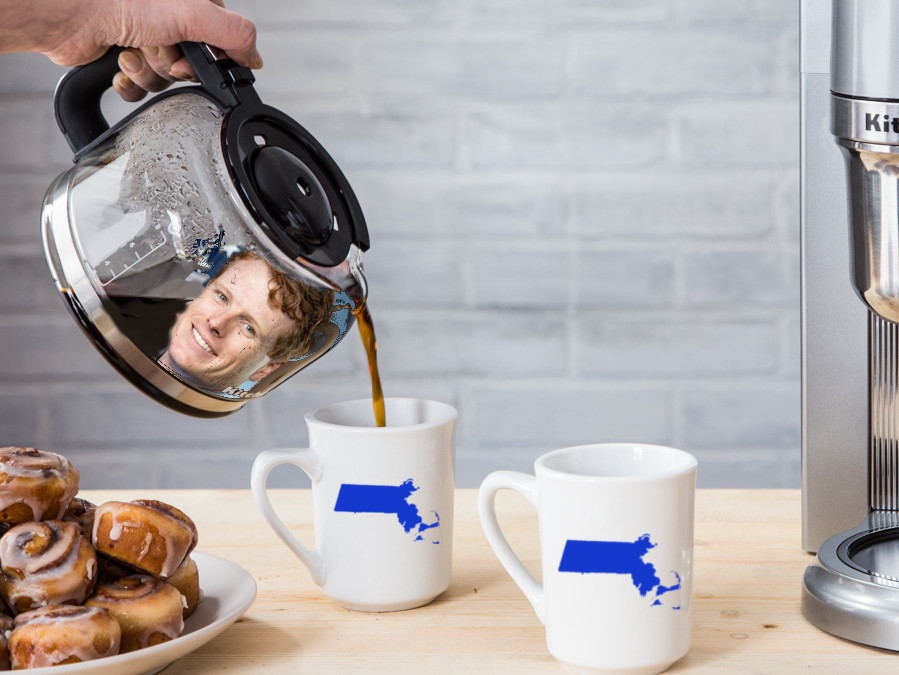 Get used to this graphic. It seems Joe’s Senate campaign is brewed and ready to serve. (created via Google images & wikipedia)

Together, these visits suggest Kennedy will campaign on paying more attention to urban Western Mass and the region in general. This strategy could have currency in other areas outside I-495, too.

Such appeals have worked before, even if, in this instance, they would unfairly imply Markey lacks interest in the Massachusetts Occident.

Yet, as inseparable as the Kennedys are from politics, so too is Massachusetts politics inseparable from its reputation as a full contact sport.