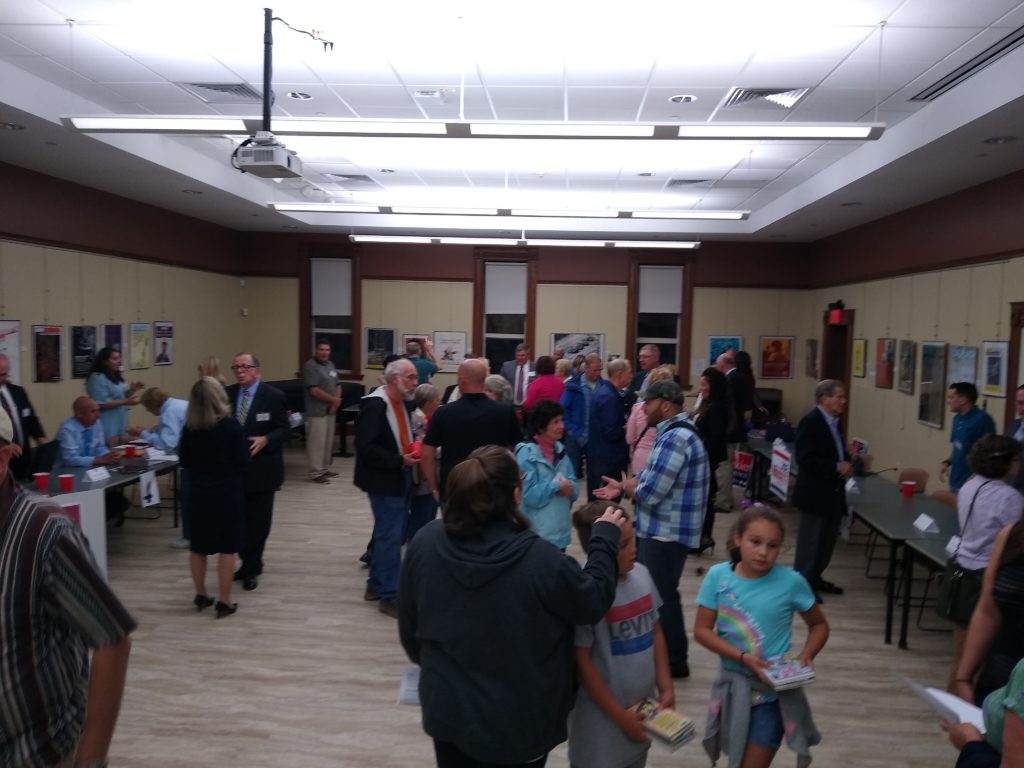 Chicopee Democrats’ candidate night, after the crowd had thinned. (WMassP&I)

CHICOPEE—While turnout in the 413’s second city has generally beat its bigger neighbor to the south, Chicopee’s elections have struggled in the excitement department. At-large races have gone by without opposition. Minimal turnover in many seats have fed complaints that City Hall has become sclerotic and unrepresentative.

That could change this year. Set against the retirement of once and again Mayor Richard Kos, a surge of candidates including women and people of color have entered the mayoral, Council and School Committee races. That interest comes amid concerns the complexion of municipal government lags shifting demographics. Meanwhile, at the heart of the mayor’s race is a split in Chicopee over the quality of the status quo.

All of this was on display last Thursday at the Chicopee Democratic City Committee’s candidate night at the Public Library here. The entire mayoral field and nearly all Council and School Committee candidates attended. Even unopposed elected executive post incumbents like Treasurer Marie LaFlamme showed.

“I’m very happy with the turnout and enthused by all the new faces,” Meghan Balakier, the City Committee chair, told WMassP&I. Adding to the latter point, she said she was “inspired” that so many people were running this year.

The turnout was notable given how soporific recent city races had been. Balakier said members had been pitching the event on social media and at community events like the Downtown Getdown.

Fervent support for both the status quo and change is a factor, too. 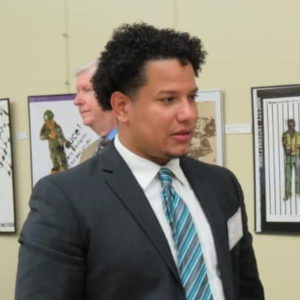 Johnny Miranda at the candidate night (via Facebook/Miranda campaign)

For example, Ward 2 Councilor and Council Vice-President Shane Brooks is facing a challenge from Johnny Miranda. Miranda argues that he can better represent the needs of the ward, which includes some of the city’s most diverse areas including downtown.

In addition to the multi-unit housing of downtown, Ward 2 features swaths of single-family homes. That creates a tension both Miranda and Brooks noted.

“Diversity in our Council gives us richer public policy,” he said.

The incumbent seems keenly aware of this, too. Brooks acknowledged the growing challenges the city faces as its population changes. Concurrent socioeconomic factors like the region’s weaker economy relative to the entire state is another factor. Chicopee schools now offer free/reduced lunch to all students regardless of income. 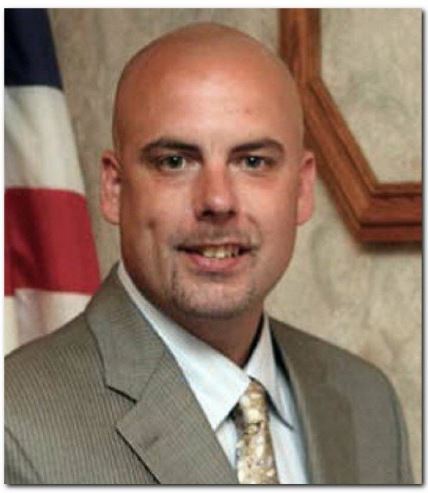 That lessens the social stigma of the program and food insecurity. Yet, it reflects the city’s challenges.

A persistent challenge has been rehabilitating downtown, which struggles like Valley city centers have. Simply sprucing things up will not overcome the issues with homelessness and drug use. The city needs to reach out and help people congregating there.

“We have to be advocates,” Brooks said of the Council. “There are many more places we can improve.”

While quality of life issues broadly speaking are animating the race, waste played particularly prominent role. The city recently transitioned to using smaller trash bins. Additional bags of waste will cost residents more. The change has prompted some backlash. Outcries have aborted similar plans in Springfield. While most incumbents have defended the plan, they also concede the city needs to do more education and outreach to explain the program’s benefits.

Council President and longtime councilor for Ward 3 John Vieau had long been rumored to succeed Kos. He entered the day days after high school vice-principal Joseph Morisette. For much of the race, they were, respectively, totems for maintaining Kos’s course and changing direction.

“I just felt it was the right time,” Vieau said of his decision to run in an interview. An ally of Kos’s, Vieau said he wanted to keep building on Kos’s work. He pointed to renovation of the public safety complex and hiring of civilian dispatchers, the latter of which, he said, would put more cops on patrol.

Yet, Vieau offered no clear departures from Kos. When pressed, he pointed to his background as a civil engineer which could help deal with the city’s sewer system. Whether to rebuild the current treatment plant or hook in Springfield’s will be high on the next mayor’s agenda.

By contrast, Morisette has found an appetite for something different. 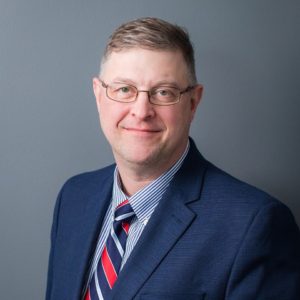 “I just don’t feel we’re in as good a place,” he told WMassP&I. Residents he has spoken with complain taxes have gone up without improvements to services. Meanwhile, city employee pay is stagnant.

“There are concerns if the same people stay in place,” he continued.

More candidates followed Vieau and Morissette. Angela Breault-Klusman, a business owner, joined in the spring. Former Mayor Michael Bissonnette jumped in after her. Bissonnette served from 2006 to 2013. In 2013, Bissonette lost reelection to Kos, who had also served as mayor from 1997 to 2004.

WMassP&I was unable to speak with Breault-Klusman and Bissonnette. However, some observers think he has a good chance Tuesday, if voters long for the pre-Kos II days.

Reached for comment, Bissonnette said worries about city finances, labor unrest, and a lack of responsiveness fueled his return. He cited under-utilization of social media as a prime example, in comparison to his use, as with storms, when in office.

“Seeing the [Kos] mistakes made with trash toters and water meter replacements shows just how political things were,” he wrote in a Facebook message. The implication being proposals were getting through without proper scrutiny. 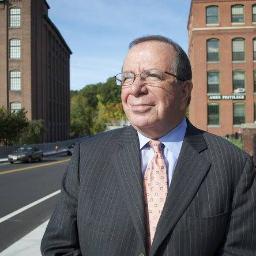 “While I have a great relationship even with those members supporting other candidates, I expect all to deal with finding solutions to our common problems on a cooperative and collegial basis,” Bissonnette continued.

Despite the sense that this may be a change election—or not—many incumbents are happy to run on their records.

“Anybody can run. I encourage people to run,” LaFlamme said. Like many of his colleagues, he intended to talk up work on public safety, municipal fiber-optic internet service, and public safety. LaFlamme added he would be reaching out to voters on these issues even without challengers. However, he said having opposition makes it easier to reach voters. 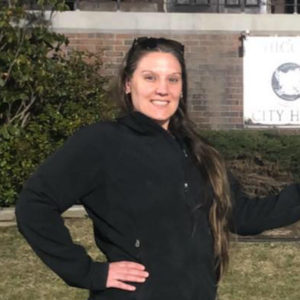 “I’m engaged all the time,” he said. “I don’t take anything for granted.”

Samson is the only woman running at-large for Council. Along with Goonan, she certainly marks a generational break from the incumbents. A 2014 graduate of Springfield College and Chicopee High alum, she emphasized her ties to the community and the need for change.

“It’s time for some new blood,” she said.

Asked why she chose to run at-large—a mathematically and logistically difficult endeavor—Samson said she wanted to reach more people in the city.

“I want to speak for everybody,” she said.

Only two School Committee ward seats are contested. The incumbents at-large members face no challenge. Four Council ward seats have contested races, including the one Vieau is vacating. 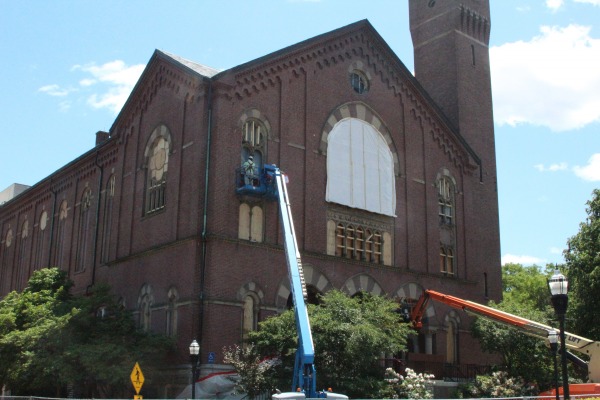 However, it is much harder to read into these challenges. Ward 1 Council Joel McAuliffe has not been shy about his criticizing Chicopee’s status quo. Yet, he faces a challenge from Haley Jarvis, a first-time candidate.

In Ward 3, however, the preliminary could define how much the race will be a break from the present. For example, Kaween Fernando, has promised more independence from the mayor’s office regardless of who wins there. He faces Lucjan Galecki and Scott Maziarz in Tuesday’s preliminary.

Crime and cleanup from microbursts over the summer are big issues in Ward 3 particularly.

A common thread is a hope that turnout is decent on Tuesday. Brooks, the Ward 2 councilor, said Chicopee had about 33,000 voters. “We should be able to get 10,000,” he said in a mix of optimism and lament. “Choice is a good thing,” he said. 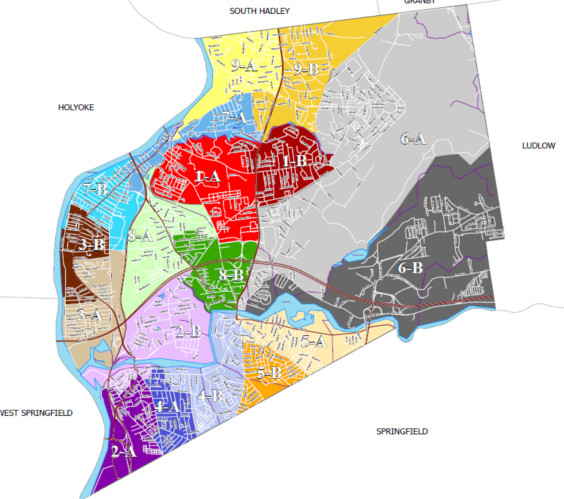 Chicopee Ward Map. Of the Wards mentioned in this story: Ward 1 is in reds. Ward 2 is in purple/violet. Ward 3 is browns. Ward 5 in orange/melon. Click for larger view. (via MA Sec. of State)

Four years ago, city activists including those on the Democratic City Committee worried about the number of uncontested races. They held events to educate residents about the process and prepare the next generation of candidates. They may not have expected a shift so quickly. Three Millennials joined city government in 2017, including McAuliffe, Ward 6 Councilor Derek Debosz, and Ward 1 School Committee member James Tanhauser.

Also four years ago, the late Miguel Roldan-Castro tried to win the Ward 5 seat. The incumbent Fred Krampits won easily. It might have been a tough climb even if the seat was open.

Unlike the Poles, French Canadians and others who came to Chicopee a century ago—and whose descendants still dominate City Hall—newer arrivals from Asia and Latin America particularly are too diffused citywide to influence elections in wards. At-large seats are even harder to win. In Holyoke and Springfield, by comparison, Latinos have the critical mass to elect one of their own to ward seats.

As for gender parity, progress may be further along. Women already hold a chunk of School Committee seats. Plus, it is telling that fewer challengers are running there.

“I think women bring a level of compassion” and a sense of the “broader picture,” Jarvis, the Ward 1 Council candidate, said.

Studies have shown women often run for office at another’s suggestion not their initiative. Balakier, the City Committee chair, emphasized that today’s women’s candidates, win or lose, could inspire women to run in the future.

“Other people will see that these women tried,” she said.