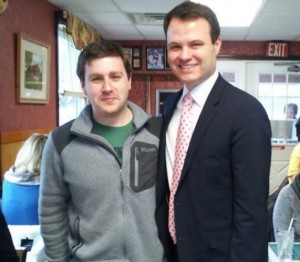 Clark and Lesser in 2014. (via Facebook/Lesser campaign)

The staff of Senator Eric Lesser experienced another shakeup this week with the departure of Michael Clark. A longtime advisor to Lesser, a Longmeadow Democrat, Clark has taken a new job outside government. He was the last staffer dating to Lesser’s original campaign in 2014.

Candy Glazer, then the chair of the Longmeadow Democratic Town Committee, had connected Clark to Lesser long before the latter ran for office himself. At the time, Lesser was an aide to David Axelrod, a top advisor to Barack Obama and Clark a rising Longmeadow poiltico. When the 1st Hampden & Hampshire Senate seat opened up, Lesser asked Clark to give up his day job to run the field plan.

“It’s really scary anytime you transition to a job and especially if its political,” Clark said referring to the uncertainty of an electoral gig.

However, Clark believed in Lesser’s message and campaign and embraced the opportunity. Obviously, everything worked out.

“Yes, it’s his name on the ballot, but I felt as much ownership over that as I think he did,” Clark explained in an interview. “When you’re with somebody from the very first day how could not?”

Clark’s last day with Lesser’s office was Friday. On Tuesday, he will start as the New England outreach director for a national public advocacy group. Clark’s responsibilities will likely go to District Director Joel McAuliffe and a future hire.

This has been a time of transition in Lesser’s office. Early last month, Lesser’s communications director, Ryan Migeed, departed the office to attend law school. Alex Reimer, a former commentator for WEEI and journalist, succeeded Migeed a couple of weeks later. 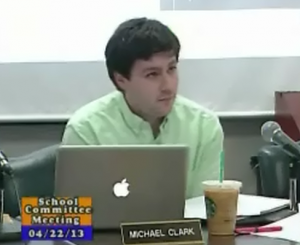 Michael Clark at a 2013 Longmeadow School Committee meeting. He made his intial political mark in town affairs. (Screen capture from LCTV)

Clark and Lesser had been active in the LDTC albeit at different times. While Lesser stayed in touch, his day-to-day involvement waned upon going to Harvard. When Clark’s entered town politics—he served two terms on the School Committee—he also joined the Democratic committee. He also worked for district attorney and governor’s council candidates and has served as its chair.

Glazer connected them circa Clark’s unsuccessful Select Board bid in 2010. Yet, their friendship began some months later. Obama was in Boston to campaign for then-Governor Deval Patrick’s reelection and Clark was there as part of a bus US Rep Richard Neal had chartered to bring in supporters from the 413. They struck up a rapport over lunch and the bus ride back west.

Lesser later invited Clark to Washington for Obama’s second inaugural and eventually got to know many of his closest Obamaworld friends.

“It’s funny to see how politics really ends up defining relationships,” Clark said. “You may not know it right away.”

For his part, Lesser was sad to see Clark go, but sounded a proud note about how his aide and friend had grown.

“Michael has been with me from the very start of my career and has been an incredible advisor, staff member and friend,” Lesser said in a statement. “I will certainly miss him but am very excited to watch his career continue to unfold and look forward to staying in close touch.”

During the campaign, Clark served as field director and, in the general election, as campaign manager, succeeding Lee Morrow. Once Lesser took office, Clark also went to Boston, ultimately becoming chief of staff.

Sen. Lesser with his second term staff in 2017. From left, Swanson, Clark, Lesser, Joel McAuliffe, Samantha Kelly and Migeed. Kelly has also since left the office. (via Twitter/@EricLesser)

However, the job included many administrative functions in Boston and Clark still lived in Longmeadow. To help resolve this logistical issue, Stephanie Swanson, who had been legislative counsel, took over as chief of staff. Clark became senior advisor and director of strategic planning. There he helped shape Lesser’s message in the district and led efforts to bridge the State House with the 413 and vice-versa.

The job had its ups and downs. For example, a challenging low-point had been resisting the institutional helplessness that defines politics generally and Western Mass vis-à-vis Boston specifically. Yet, Lesser’s office had been able to move the needle on East-West rail, opioids and economic development.

Asked for specific examples, Clark took pains to note everything in the office was a team effort. However, he noted both hyper-local projects and policy changes.

A longstanding responsibility was turning funding requests into something the Senate would vote on come budget or bonding time.

Early in Lesser’s tenure, Clark led efforts to accelerate the repair and reopening of the red bridge linking Ludlow and Wilbraham. The closure had sentenced residents to a seven-mile detour.

In policy, Clark pointed to the establishment of a drug court to Springfield. He worked alongside Pioneer Valley Project to realize that goal.

Don’t worry, he’ll still be at-large in Boston and throughout New England. (Image via wikipedia & Facebook)

Clark’s role put him in charge of assembling Lesser’s district presence. He would attend events, but more often, that meant creating moments to further Lesser’s agenda and/or outreach. For example, a major task has been planning Lesser’s annual Thrive after 55 fair.

“I spend like three months of my year getting that done,” Clark quipped.

These are what Clark will remember fondly and, arguably, will miss. But, he added, they also highlight a central theme of Lesser’s campaign: changing the culture in local and state politics.

“It’s this idea that we don’t take no for an answer. That we stand up and fight for ourselves,” Clark said.