Take My Council, Please: Enemies of the Good…

SPRINGFIELD—Queasiness about the city’s marijuana process had seemed set to dominate Monday’s meeting of the City Council. However, ratification of the first four host community agreements (HCA) flew by with little trouble. Instead, the struggle to reform police oversight stormed back to the fore, exposing divisions among councilors.

Opponents see the bill as capitulation to the mayor’s illegal abrogation of a duly passed ordinance. Supporters don’t disagree, but they counter the Council lacks an avenue to force the mayor to comply. They would rather put Pearl Street’s leadership on a legal posture, than expose the city to liability or wait for another party to enter the fray.

Ward 5 Councilor Marcus Williams was absent from the meeting.

The mayor’s action to declare the ordinance a violation of the charter and enact none of it—even the parts that violate nothing—is a dramatic power grab. The wisdom of a police commission versus a sole commissioner model is beside the point.

It is possible the ordinance debate robbed the Council of the strength to litigate the pot HCAs too much. 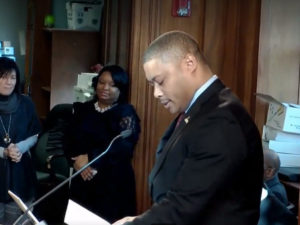 Consultants are common in these projects. Many essentially schedule meetings and provide political advice. That prompted Hurst to raise another concern: Fall River Mayor Jasiel Correia arrest for crimes related to that city’s marijuana process.

Despite Springfield Mayor Domenic Sarno’s histrionics, all applicants identified their consultants. None raised red flags and all were eager to cooperate with the Council.

Concerns about Davis faded, too. She was not at Monday’s meeting. Gomez remarked during his committee report it was unfair to put her in this position.

Each of the applicants offered elevator pitches for their proposals. Generally, all proposals included community investments and programs, many to broaden their reach into underprivileged areas of the city. Ward 2 Councilor Michael Fenton abstained from all marijuana votes because his law firm has taken on some marijuana-related business, albeit none is in Springfield.

Former City Council Timothy Rooke, who is heading a proposed shop at 311 Page Boulevard, noted his groups partnership with Springfield Technical Community College. This would include on-the-job training and scholarships. The Council ratified the project unanimously.

Payton Shubrick, who is leading effort to open a shop at Gasoline Alley on Albany Street, was showered with praised from councilors. Shubrick said she was partly motivated by Michelle Alexander’s book about mass incarceration and its impact on communities of color. Her shop, 6 Bricks, would be among the few minority-owned marijuana enterprises in Massachusetts.

The remaining two passed easily with some opposition.

Attorney Stephen Krevalin presented on behalf of Holistic Industries. Its dispensary would be near the intersection of Boston and Pasco Roads. Krevalin said his client was making stronger commitments to hire women, minorities and veterans following input from councilors. Hurst clarified this was only a suggestion, but Krevalin did not seem to have a problem with the request.

The final proposal came from INSA, one of the largest chains of dispensaries in the commonwealth. Its shop is slated for West Columbus Avenue in the former Luxe Burger. INSA features robust employment commitments—upwards of 60 employees—but has attracted controversy. It essentially gifted the city a six-figure grant for park programs. That could run afoul of statutory limits on payments to localities.

INSA has argued that the funds were unconnected to the HCA entirely. Their agreement also passed 10-1. Only Hurst dissented.

Aside from the police commission ordinance, the rest of the meeting was uneventful.

Comptroller Pat Burns presented the city’s monthly budget update for August. Burns said that the city was currently running a deficit, but that this was normal for the time of year.

The Council also received its second annual package of Community Preservation Committee (CPC) recommendations. Robert McCarroll, the Committee’s Springfield Preservation Trust’s representative, informed the Council that they would have more funds thanks to action on Beacon Hill. In addition to the property tax surcharge, the state kicks in a match. This has been notoriously underfunded, but the legislature modestly reversed that progression this year.

Consequently, about $1.6 million are available for this CPC cycle. All projects were presented Monday and referred to committee for additional review. Among the proposals are restoration of the Forest Park trolley pavilion, numerous park and traffic island upgrades, and a study of Old First Church.

Councilors also greenlit grants for the Elder Affairs, Library and Police departments. The largest of the library funds was from the Annie Curran fund which supports the Mason Square branch library. Various unpaid bills from last year and a land transfer in the North End—to renovate an adjacent gas station—also received Council approval.

During a slog through state procurement law, Pikula seemed to indicate that this was always necessary prior to advertisement. That is not exactly what the statute says. Ultimately, Pikula focused on this project’s rolling implementation, necessitating the advance authorization.

Lederman, observing Councilor Fenton has raised these pre-award approvals before said body cams were too important to delay. However, he assured he would return to the subject.

“It warrants more discussion in the future,” Lederman said. The authorization passed unanimously.

Fire Commissioner Bernard Calvi indicated the equipment slated for replacement dates to 1996. Purchasing was more advanced here. The new vehicle, Calvi said, had already been identified and the authorization would facilitate financing. It passed unanimously, too.

The impetus for the new police oversight ordinance was the revelation that the city destroyed records it had improperly subpoenaed. The subpoenas sought phone records of officers involved in the Nathan Bill’s fracas. To avoid suit with the patrolmen’s union, the city claims it destroyed the records.

Some councilors, troubled by this revelation and certain Sarno would never implement the police commission, proposed an ordinance to restore the sole commission and codify the review board. Left unstated is the dubiousness of Commissioner Cheryl Clapprood’s current authority to hire, promote, fire, and discipline cops. Should the Civil Service Commission or a court find that the unappointed-Police Commission actually has that authority, the city might owe canned or disciplined officers backpay.

Not all Commission supporters have clean hands, however. There was an opportunity to obtain counsel to sue the mayor, but City Hall sources claims key councilors balked.

“It is legal because I wish it!” -Louis XIV or Domenic I, whichever… (created via Business West & Hyacinthe Rigauld’s Louis XIV images)

The ordinance from earlier this year went to committee, prompting Sarno to petulenty declare he would act through executive order again.

Against this background councilors jousted anew about the issue Monday. Ward 7 Councilor Timothy Allen introduced the issue. He restarted talks with the mayor. The new order never came to be since it had been delayed at Pikula’s request. Moreover, no order could correct the ostensible reason this debate began: subpoena power. Only the Council can bestow that.

However, if the Council abolished the new Police Commission and reestablished the sole Commissioner model—Sarno has since appointed Clapprood permanently—she would have her own subpoena power.

In resurrecting the police review board—and abolishing the Police Commission—Allen said Springfield was among the few cities in Massachusetts with civilian oversight. While true, it is common among big New England cities.

The Public Safety chair, Ward 8 Councilor Orlando Ramos, defended the inaction since June. After the mayor’s conniption, Ramos abandoned efforts to draft amendments to the ordinance.

The refiled ordinance, identical to the earlier one, still had problems, Ramos insisted.

He works hard for the ordinances? Councilor Orlando Ramos in 2016. (WMassP&I)

“There is nothing in the original ordinance that will improve the system as it stands,” he said. However, Ramos promised to continue the heretofore incomplete committee process. “We’ll pick up where we left off,” he continued.

Still, a crossfire of accusations and resigned urgency descended on the chamber.

“Years have passed since it is has become clear that this is not something that is going to become implemented,” Fenton, a cosponsor of the ordinance said.

“I put in a lot of hard work and effort,” Ramos countered. “I held two committee meetings in which we discussed amendments that came out of that research.”

“We have councilors who have been working on this for a long time and are asking us to wait until that work is finished,” at-large Councilor Kateri Walsh said. “I think that out of respect for the work that has been done.”

Ward 6 Councilor Ken Shea tried to conciliate somewhat. “I think everyone on this council has worked hard on this. I don’t think we’re calling that into question,” he said. But like Allen, Fenton and Timothy Ryan, Shea urged passage of first step.

Other, like Lederman, took pains to note their support for a commission was not about Clapprood.

Ward 3 Councilor Melvin Edwards did not outright state his position, but his frustration was apparent. He observer there were still open questions like why former Commissioner John Barbieri departed so suddenly.

“To this day, we still don’t know why he went home in an Uber,” he said.

Edwards panned the notion that this ordinance represented a compromise and questioned why subpoena powers suddenly became important. To Edwards’s point, the new ordinances essentially enacts the 2011 proposal to codify the mayor’s executive order, albeit with structural changes. The current mayor’s order includes subpoena power, but this is generally viewed as a dead letter.

Barbieri, whose status as commissioner predated the current Police Commission ordinance, did have such power. However, in response to public records requests WMassP&I has filed, the city reported no record of him issuing a subpoena between 2015 and 2018. Most recent police scandals happened in that period.

The Council largely, if not unanimously, agrees on what it wants—a police commission. Councilors have split on whether to concede Sarno refusal blocks any hope of that happening. The schism reveals deep mistrust among members on the issue. A mix of frustrated political posturing and earnest righteousness colors both sides.

Meanwhile, a lawless mayor gets his way.