UPDATED 2:00PM: To include details of Commission Calvi’s letter and other investigations. 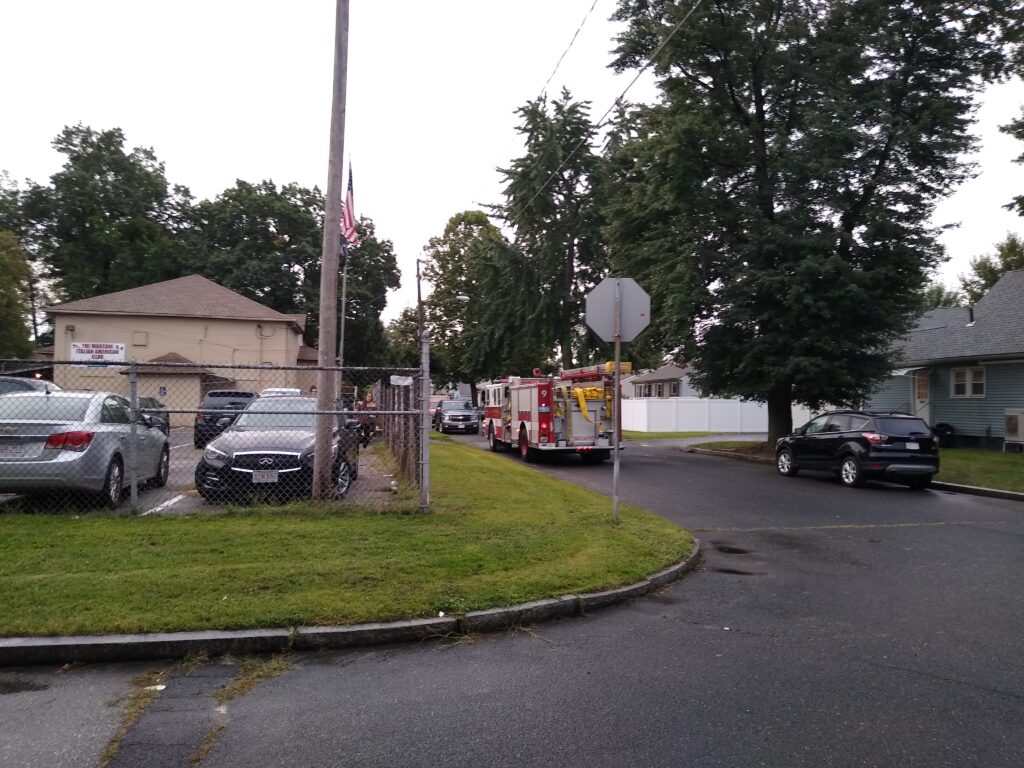 SPRINGFIELD—Before his online commenting past became public, Chris Pohner, a retired firefighter, was Domenic Sarno’s candidate for City Council at-large. On the afternoon of September 14, Sarno was rallying the troops at Pohner’s pig roast fundraiser at the Marconi Club on Parallel Street. The mayor was in shorts and a T-shirt, weekend wear before Saturday mass. The wardrobe of others may signal trouble ahead, though.

Behind Sarno were several firefighters decked out in turnout jackets and gear. Engine 9 was parked outside with no sign of fire. Video of Sarno’s remarks showed no alarm either. No law prohibits Springfield’s Bravest from supporting candidates for political office on their own time. Given Pohner’s history in the department, it is not surprising many firefighters would back him. However, state ethics Law bars the use of municipal assets, titles and time to support a political campaign in any way as ostensibly happened here.

Typically, responsibility may rest with any uniformed city employees using municipal resources for a political purpose or any superiors who knew, condoned or ordered it. Indeed, by campaigning in front of uniformed firefighters, both for Pohner and to a lesser extent for himself, the mayor may have drawn responsibility closer to himself. 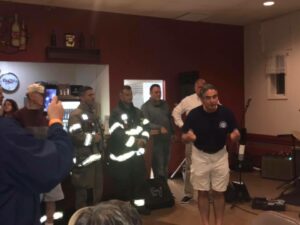 Sarno has not been as obliging of Pohner since WMassP&I reported on the former’s history of derogatory and bigoted online comments aimed at minorities and LGBTQ people. The mayor backed away from Pohner. Sitting councilors, candidates, community leaders and a statewide LGBTQ group called for him to drop out. The Western Massachusetts Area Labor Federation unanimously voted to rescind their endorsement.

Pohner faces few discernible repercussions if municipal resources were found to be used to benefit his campaign. He has since retired from the Fire Department and holds no command that could impute responsibility upon him. Similarly, no off-duty, out-of-uniform firefighter would face consequences for simply attending the event or donating.

Campaign finance regulators might rule that the presence of uniformed firefighters and their truck outside constitutes a contribution. However, a simple report correction might cure this barring other discrepancies.

Massachusetts ethics law is complex, but less so in this area. State and municipal employees cannot solicit money for political campaigns, even if they are the candidate. They also cannot use their office or government assets for the benefit of any political candidate. Elected officials can fundraise—unless they hold another, non-elected government job—and use their title to campaign for others and themselves.

The McCormack Building in Boston, home to the State Ethics Commission. (via Wikipedia)

The essence of these ethics laws is the recognition that government itself cannot choose sides in elections.

In a 2011 advisory, the Massachusetts State Ethics Commission is very clear about what is not allowed. Aside from exceptions related to ballot questions and elected officials, “a public employee may not (Commission’s emphasis) engage in political activity, whether election-related or non-election related, on his public work time; while acting in his official capacity or while in his official uniform;… or with the use of other public resources, such as staff time, public office space and facilities, public office equipment…”

Although elected officials can use their title and time for political purposes, they cannot direct official resources to such ends.

When the Ethics Commission has confronted uniform cases, it often involves law enforcement at political events or appearing a circumstance that seemed to lend state power to a non-state action.

For example, last year the Commission fined a Medford cop for posing with people costumed as caricatures of 2016 candidates, implying disapproval of one candidate.

Another verboten circumstance arose when sheriff’s deputy tried to collect rent from tenants in uniform and accompanied by an armed correctional officer. The Commission ruled such an appearance could appear to intimidating, with the force of state behind the landlord. 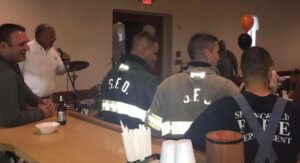 The SFD lettering is clearly visible in some photos, indicating this was city equipment. (via Facebook/Marconi Club)

Municipal equipment usually interacts with prohibited political activity in somewhat subtle ways. Common problems are the use of office equipment to print flyers or the solicitation of support over a government email system.

In this circumstance, there are several issues. The first would be the apparent endorsement of Pohner by the Springfield Fire Department by virtue of firefighters appearing in firefighter jackets. In some photos, their SFD labeling is unmistakable.

The second matter is allocation of a government asset: Engine 9. The truck is based at the Raymond Sullivan Safety Complex on Carew Street. However, at about 5:45pm when WMassP&I observed it on Parallel Street outside the Marconi Club, it was almost a mile away from its stationhouse. It sat idle for at least ten minutes. At one point, it appeared to be entertaining children at the fundraiser.

Whether it merely ferried the firefighters to the fundraiser or served some other purpose, it seemed to be serving a political end and not an official purpose.

Like all municipal employees, the mayor undergoes semi-regular ethics training, including reviews of rules about allocation of municipal resources for political uses.

Sarno’s office did not return a request for comment about how Engine 9 and firefighters in uniform came to attend the fundraiser. 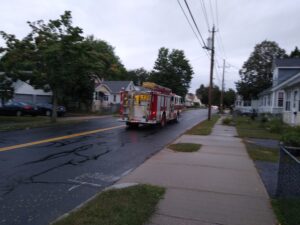 However, on Friday, after this story was published, Sarno directed his chief of staff to reach out to Fire Commissioner Bernard Calvi to look into this matter. In a letter released by the mayor’s office, Calvi indicates this was the first he had heard of the situation. He has opened an investigation, which remains ongoing, and has re-posted policies and procedures related to political activity.

Chatter has already begun about state ethics complaints and more investigations. It is unsurprising correspondence to and from Calvi did not mention the mayor, and it may fall to state entities to consider his role given how open and obvious it was.

What’s clear is as the firefighters stood in the background—and the firetruck waited outside—Sarno exhorted the crowd to not let up.

“Send the message that common sense is going to prevail for the city of Springfield,” he said during his remarks.