Take My Council, Please: Wanting It Is 1/2 the Battle…

SPRINGFIELD—The City Council returned from its Election Day hiatus to a relatively tame agenda. The items most prone to discord did not get an airing. A separate reserve servicemembers program has support, but councilors agreed more financial information was needed. However, a new tax work-off program for seniors received final approval from the body.

The program was authorized under state law 17 years ago. Springfield, trapped in a fiscal crunch for much of 21st century, had balked, desperate for all the change in the municipal couch cushions. The budget is more flexible now, providing space for a modest start to the program. Successful applicants to the program will be able to work off a portion of their property tax bill up to $1500.

Councilors-elect Malo Brown and Victor Davila of Wards 4 and 6 respectively joined the Council inside the rail.

Several high-profile items remain stabled in committee. Among them are a ban on facial recognition and a concession to the mayor’s refusal to implement the Police Commission ordinance.

Form over function? Graphic of proposed redesign of the X. (via Springfield City Hall)

An order to bar land takings for reconstruction of the X intersection in Forest Park will debut next month, its chief sponsor Timothy Ryan said. The outgoing at-large councilor introduced the measure this Fall to arrest or at least force changes to the project. On Monday at-large councilor Kateri Walsh noted that the design, as it currently exists, lacks support from the neighborhood.

“At every public meeting, there have been numerous concerns,” Walsh said. However, people “do not seem to get very far voicing their concerns.”

As proposed, it would divert all Belmont traffic heading into the X onto Sumner Avenue. Sumner would also be widened, taking out several trees along the way. Ward 3 Councilor Melvin Edwards, invoking recent reconstructions in and near his ward, panned elements of the project. He said it seemed to privilege the creativity of planners over practicality. Plus, Edwards suggested, the administration’s motive was not need, but an inability to refuse money.

“Please take this very seriously,” Edwards said, “because the neighborhood, they don’t want it.”

Also remaining in committee was the adoption of the BRAVE Act, which would expand benefits for city employees called up for active reserve or national guard duty. It went to committee last month over the objections of Walsh, its lead cosponsor. This Monday, she concurred with gathering more information first.

Because nobody was available to speak on them, the Council sent confirmations for the Mobile Home Rent Control Board to committee instead. Utilities reports were accepted without incident.

Site plan for the new combined school. DeBerry School Park would be taken up by the new building. (via Western Mass News)

The Council advanced a home rule petition to transfer parkland. Under Article 97 of Massachusetts’s constitution, parkland cannot be given away unless replaced with an alternative. Beacon Hill’s approval is required.

The swap Springfield seeks is for the proposed Homer-DeBerry combined school. Part of DeBerry Park will be used for the new school. New parkland near King Street and Wilbraham Avenue will replace it. The vote to advance the petition to the legislature was unanimous.

The Council greenlit grants for libraries and gambling addition programs for $315,000 and $160,000 respectively. Another $100,000 to building trails near Camp STAR was also approved. Smaller grants for recycling and housing also received Council approval.

A $132,000 federal JAG grand from the US Department of Justice also passed. Ward 1 Councilor Adam Gomez inquired whether the there was any reduction compared to other years. Deputy Chief Administrative & Financial Officer Lindsay Hackett said its value was about average.

Gomez then dryly observed that the city did not lose funding after approving the Welcoming Community Trust ordinance last year. The law generally bars the city from inquiring into immigration status. Mayor Domenic Sarno’s incontinent invective against the ordinance included claims the law would jeopardize federal funding.

The Council acceded to four land transactions. Virtually all new owners would use the land for green space or parking. All votes were anonymous, though Ward 8 Councilor Orlando Ramos abstained on a Cardinal Street transfer.

As for the senior write-off, qualifying applicant can apply for the program’s initial 20 slots. Selectees can work off up to $1500 of their residential tax burden. Councilors feted the item’s sponsors, namely Councilors Ramos, Gomez, and at-large Councilor Tracye Whitfield. It passed second and final step unanimously.

The Council’s last significant items were zone changes. One related to additional special permit requirements for medical offices. It is thought to target methadone clinics like the controversial one in the South End. 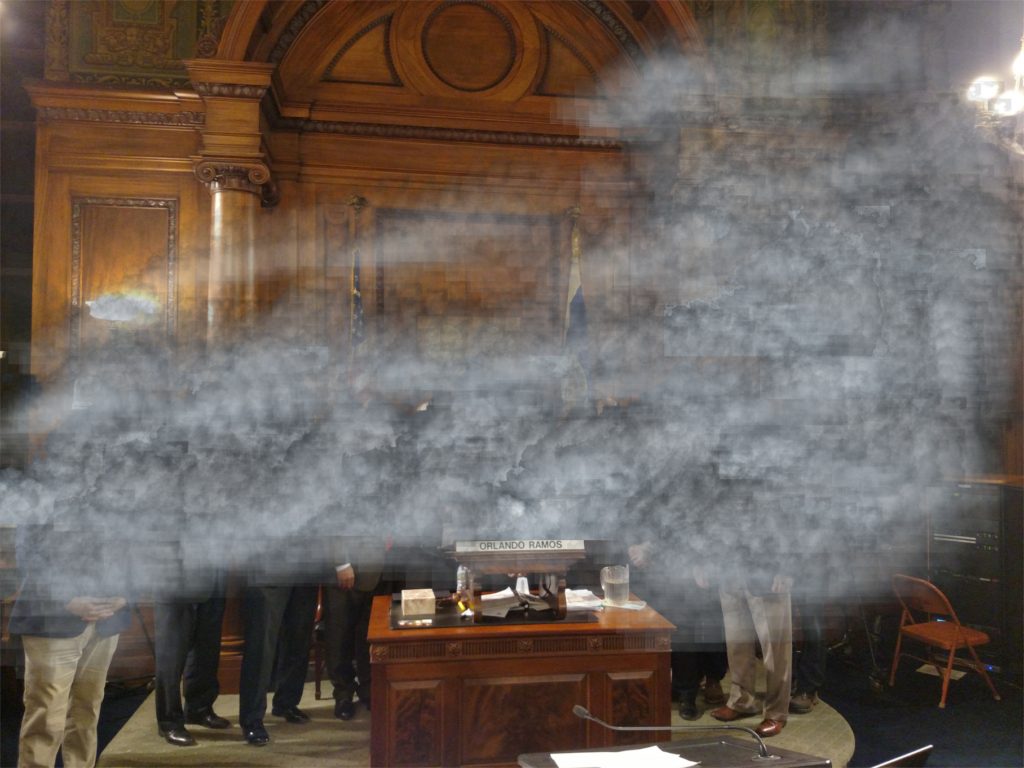 The Council wants the good stuff. (created from WMassP&I images)

Another change would broaden where marijuana cultivation facilities could open. Some councilors thought it might affect the number of retail pot shops allowed in Springfield. It would not. However, non-retail marijuana facilities have no cap, but they are permitted in only a few areas.

“We restricted it so much so that it became almost impossible,” Ramos said, even as he said the city had one of the best pot ordinances in the country.

Gomez explained the change would allow cultivation at “Business B” as well as “Industrial” plots. If passed, weed-growing or packaging could find homes at the city’s growing portfolio of derelict retail properties.

Both zone changes went to committee for now.

The only other matter a discussion on pending litigation related to marijuana. All councilors voted to enter executive session, save Ward 2 Councilor Michael Fenton who abstained. Fenton has largely abstained from the city’s reefer madness because clients of his law firm may have dank business soon.

The Council’s first post-election meeting was quite calm and notably quick. Sarno may have been reelected, but so was a Council that has asserted its right to set city policy. The items in committee are a reminder of the battles ahead—and they are only a sample.

With Twiggs’s passing, the Council will likely only have 12 members until January. It is legally possible for a replacement could take office before the end of the year, but the timeline is very tight. Nevertheless, these events will close this Council on a sadder note than usual next month.