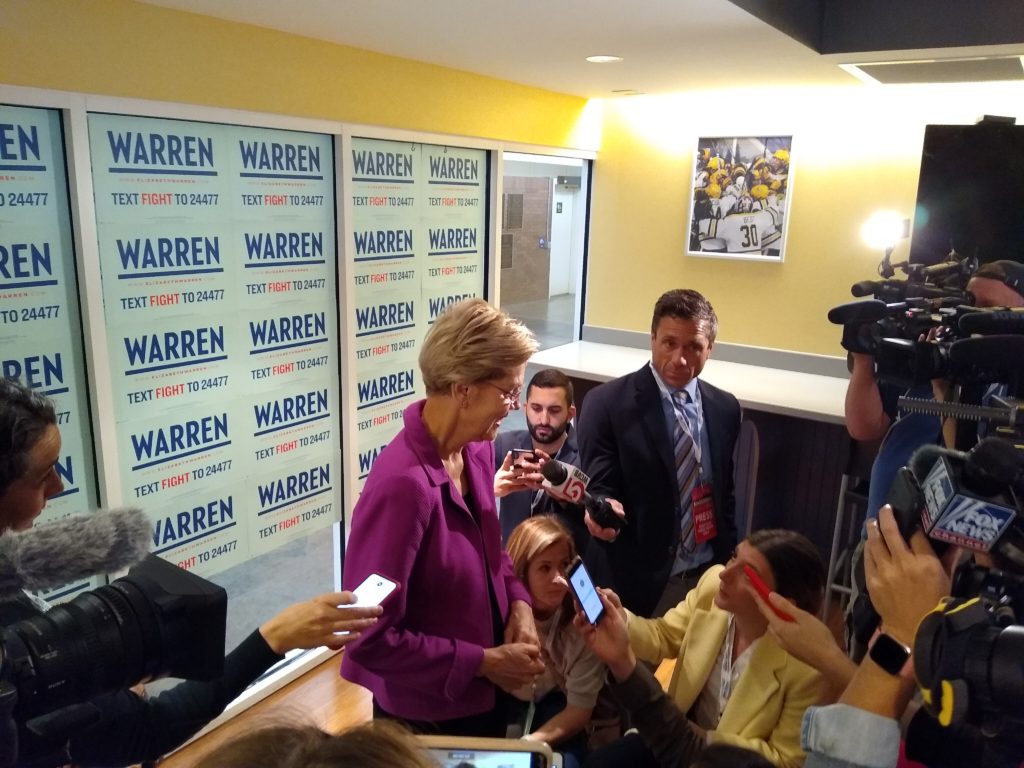 There would be multiple phases of the Warren Medicare Universe. (WMassP&I)

A recent string of polls suggest the high, if not the party, may be over for Elizabeth Warren. After an early Fall where she seemingly eclipsed former Vice-President Joe Biden, the senior senator from Massachusetts has seen her star fade. South Bend, Indiana Mayor Pete Buttigieg has returned to the spotlight and other moderate have revived efforts to cannibalize Biden’s support.

Pundits are right to point out that her Medicare for All (MFA) position is a factor. More accurately, the whole arc of her relationship with the policy is the problem. Many voters worried about the political liabilities of the proposal. Others seemingly bailed when she seemed to publicly temper her plans. Still, she was entirely right to take this path. MFA cannot pass in her first two years and other matters must take precedence. It may be the best way to make MFA happen, too.

To be clear, this blog is agnostic about single-payer or MFA. We do not care how healthcare is delivered or financed, provided that it is effective and universally accessible, regardless of ability to pay. We fear that while supporters may be right on many of the facts, they wave off the political targets MFA bears.

Supporters will often point to America’s abysmal standing in health access compared to the rest of the West. But this ignores some key facts. Many Western countries created their systems whether a truly socialist endeavor (Great Britain) or tightly regulated public/private insurance schemes (France & Germany) after the World War II.

By almost any measure the United States, Canada and the Antipodes were not nearly as devastated by the War as Europe and even Asia were. Aside from the United States, these other countries created universal government-financed systems, but the US never did. 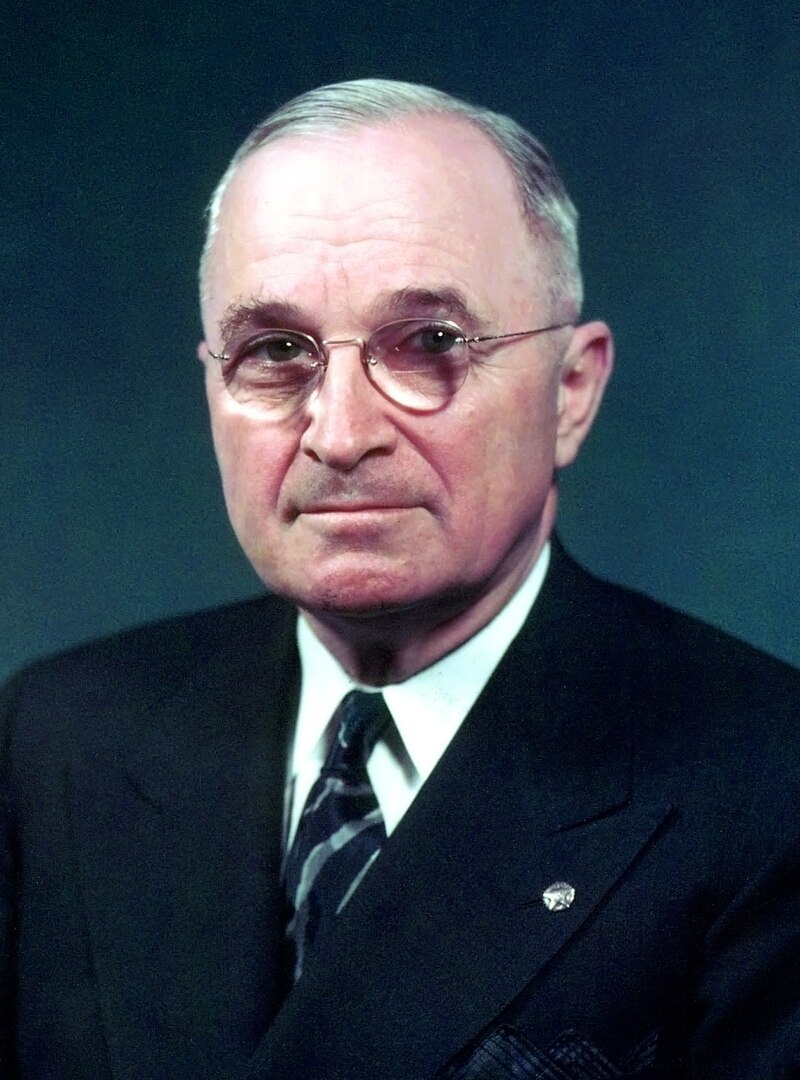 In a very different political era,  the Mad Titans of the Medical/Business establishment beat back Truman’s universal healthcare proposal. (via Wikipedia)

Harry Truman tried, an effort that would have put a quick end the growing practice of employer-provided health insurance. The healthcare industry freaked and hired crack operatives to kill the effort.

What almost none of these countries did abolish private health insurance. But Senator Bernie Sanders’s MFA bill does this. Many leading Democrats eyeing the presidency, including Warren, signed on, hoping to corral the left. As hated as health insurers are, their abolition stirs fears of disruption, just as the Affordable Care Act and attempts to repeal it did.

The problem is not necessarily supporting a single-payer system. It was supporting this bill, which did not have a plan attached to it about payment and certainly didn’t come with a guidebook on how to maneuver the politics. This was part of Republicans’ folly in repealing the ACA. They had to plan to meet their objectives without adverse consequences and couldn’t.

Warren eventually likely realized this, especially as Buttigieg began advancing. Despite the criticism from some quarters, Warren met the challenge of financing. Her rivals dropped that subject.

However, she still went on to announce a bifurcation of establishing MFA. Essentially, in her first 100 days, she would establish a public option via reconciliation, which maneuvers around the filibuster on certain fiscal matters. No later than her third year in office, after implementing a host of other health-related proposals, Warren would push to pass MFA legislation.

Technically, Warren’s two-part response does not back away from MFA. Saying otherwise is a lie. What it does do, which can be as blasphemous in politics, is bow to political reality. 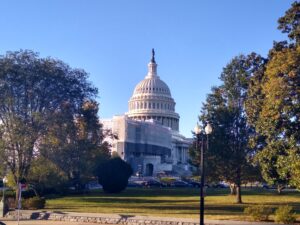 Deny it all you want, only phase 1 can get greenlit in Warren’s first two years as president. (WMassP&I)

The fact is that under the sunniest of circumstances, MFA is not happening before then anyway. Warren supports ending the legislative filibuster, but Democrats have to win the Senate first. There’s not guarantee they’ll have the votes to change the rules. Democratic Senators Kyrsten Sinema, Jon Tester and Joe Manchin are dead-set against it. There little leverage to for a change mind.

Even then, there is no reason to believe there will be 50 votes plus the vice-president to pass the bill in the Senate sat in 2021. It will take sustained fighting and the survival of Democratic majorities in 2022 to make this happen.

This will be true for a major reason: time. As much as Warren has cobbled together answers to MFA’s critics, the bill or bills necessary to implement it will take time to write, take testimony and ultimately sell to the American public. (Without the abolition of the filibuster, the many changes will likely be ineligible under reconciliation).

By comparison, depending on where you start in history, it took at least three years of legislative work before the Social Security Amendments of 1965—which created Medicare and Medicaid—became law. Arguably, efforts backdate to the Truman administration.

In short, while it may be satisfying to shove MFA through during President Warren’s first years in office president, the risks both to the program and political are great.

There’s another reason why Warren’s approach is better. MFA is not America’s most pressing issue competing for legislative time. Certainly, it will bring relief to millions of people, if its supporters are right. However, it pales in comparison to action on climate.

Reconciliation can only be used once every fiscal year and many climate initiatives can be executed through the budget. Shoehorning in massive action to save the planet must take precedence.

MFA was probably not originally one of Warren’s mightiest policies. (WMassP&I)

There is also the inescapable fact that while Warren does care about MFA, income inequality, financial regulation, and business reform are clearly more important. Indeed, they are elements of her pre-MFA reforms, and executing them outside an exclusive healthcare context will have a broader impact.

This need not be deemed a cave. Good legislation shouldn’t be rushed anyway. A better bill can come about without crowding out other priorities and the table will be set to implement when the support exists in Congress.

Her outline does differ from Buttigieg’s approach, which is passive, only arriving at single-payer if a public option kills off private insurance.

Again, this blog is agnostic about MFA. We doubt, in the end, any system will completely abolish private health insurance or private payments for healthcare. Virtually no system in the West is like that. Even Sanders has effectively given ground, if not flip-flopped, on this point.

Yet, transferring primary responsibility to the government for all Americans must be done right and cannot be done at the expense of other, perhaps more important issues (read: climate).

The biggest changes in American political history come in evolutions. Other than the first, revolutions have a mixed history. Though frustrating, slower evolution have longer-lasting consequences. The heart of the New Deal survived—and largely still survives—despite increasingly conservative Republican presidencies because it was a pivot not a catapult from the laissez-faire status quo of the 1920’s. Likewise, despite Reaganism’s best efforts, major pillars of the Great Society endure.

This editorial is not an endorsement of Warren—we remain neutral on the race for now—but MFA supporters should see not see her not as a apostate or coward. This is how to get things done. The revolution many seek may come over time, not instantly. Incidentally, compromise is how Sanders has made a difference throughout his whole career. Why should Warren get any less credit?