2020 Vision: Pols Traveling North of the Border for Warren…

UPDATED 1/14/20 1:07PM: To correct a previous version of this story that called Michelle Wu a former Boston City Councilor. She is still on the Council, but is its former President. 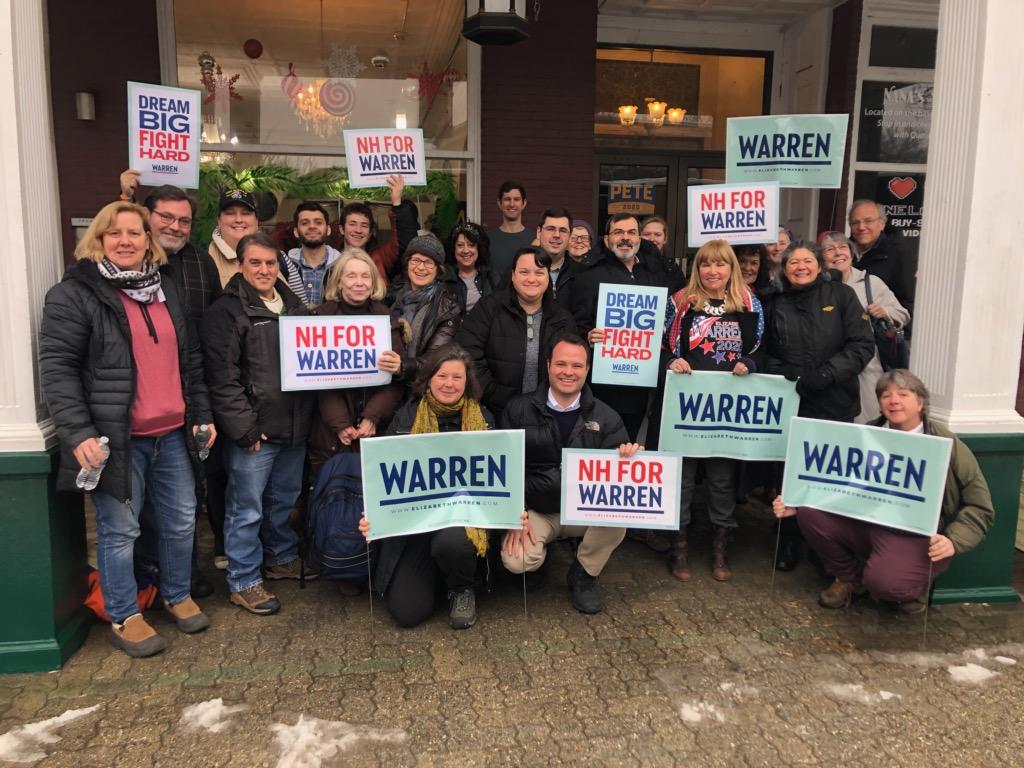 In New Hampshire, the gang’s all here (that was on the bus). (via Elizabeth Warren campaign)

CLAREMONT, N.H.—Despite the drizzly weather and half-frozen slush last Saturday, a bus load of Elizabeth Warren supporters from the 413 were traipsing through the streets to canvass for her. They braved the mucky if not inhospitable conditions to boost the senior US Senate from Massachusetts ahead of the nation’s first presidential primary contest.

Leading the trip last week to the Granite State were Massachusetts State Senators Jo Comerford and Eric Lesser and State Rep Dan Carey. However, theirs was only one of many Bay State pols have put together on behalf of Elizabeth Warren. Other campaigns are doing the same, including that of former Massachusetts Governor Deval Patrick, but the earliness of her bid and the proximity of her state offer Warren a helpful boost.

“It this it is important for people from her home state to be on the road for her,” Comerford said in a later phone interview.

Comerford noted that she could also speak as an elected official who has worked collaboratively and effectively with Warren’s office. Lesser agreed, noting the attention Warren has given the 413.

Indeed, since her election to the US Senate in 2012, Warren has cultivated close relationships with like-minded electeds up and down Massachusetts.

Vermont Senator Bernie Sanders likely has hordes from the Green Mountain State crossing the Connecticut River into New Hampshire, as Warren has from Massachusetts. All presidential contenders have their in-state support, too. 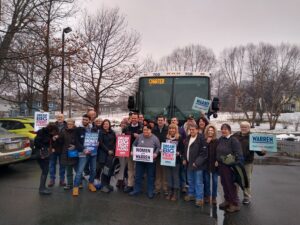 All aboard in Northampton last Saturday. (WMP&I)

Warren has one advantage in the proximity department: scale. More people live in Western Massachusetts than all of Vermont. The Comerford-Lesser-Carey express is not the only effort from the 413. Warren’s Northampton office teems with volunteers and her Massachusetts state director, Jossie Valentin, hails from Holyoke.

Out east, the senator has even more reinforcements. Three of the state’s most visible and in demand electeds, Attorney General Maura Healey Boston City Councilor Michelle Wu and Boston Congresswoman Ayanna Pressley have stumped for Warren up north. US Senator Ed Markey and Reps Katherine Clark, Joseph Kennedy, III, James McGovern and Lori Trahan have campaigned for Warren, too.

In an interview with WMP&I on the way back from New Hampshire last weekend, Lesser highlighted a key reason to come north to campaign for Warren in person. It gets around the blizzard of cable news and social media and reaches voters directly.

The bus picked up volunteers in Springfield and Northampton before journeying north to Claremont.

A former mill town in the Valley region of New Hampshire, Claremont typifies some of the mill town struggles endemic in New England. Twenty years ago, it was the lead plaintiff in an education funding equity lawsuit against the state. 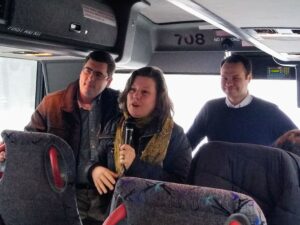 Senator Comerford addresses the bus after getting on in Noho as Rep Carey and Sen. Lesser look on. (WMP&I)

In this way, Western Mass officials campaigning for Warren offers another benefit. Comerford observed that concerns she heard here about declining economic opportunities and healthcare coverage were very familiar to those she hears in her sprawling district that runs from Northampton and Amherst to the Vermont and New Hampshire borders.

The issues were “resonant between what I’ve heard here at home and what people in New Hampshire are talking about.”

The campaign office here in Claremont sits in the center of town in an old office building. The campaigns of Sanders and former South Bend, Indiana Mayor Pete Buttigieg were in the same building overlooking the town square.

In a large conference room that may have once been a small banquet fall or board room, volunteers underwent training and coordinated car rides to their respective turfs. The frosty rain falling here slowed but did not stop Warren’s supporters. Some found few folks home—or unwilling to confront the elements outside—but others had good conversations on the doors.

“I talked to people who wanted a candidate who will make real people’s life a little bit better,” Comerford said. Warren “doesn’t want to head to Washington to do rarefied removed policy work. She wants to bend government in the name of making people’s lives better.” 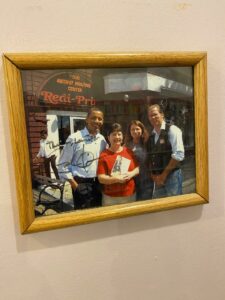 Now at Violet’s Book Exchange, a picture of then. (courtesy Eric Lesser)

Lesser said many people he met were undecided voters, which often made for better conversations. People remember their interactions with campaigns.

As it happened, Lesser noticed that a bookstore near the campaign office was the same Barack Obama had visited during the 2008 campaign. Lesser was among Obama’s campaign staffers then.

Inside is a signed photo of the not-yet-44th President of the United States. Lesser recognized a friend and fellow staffer Samantha Tubman in the background.

“It just shows you that there’s a lot of history. These visits really matter,” Lesser said. “That’s now 12 years ago and the pictures is still up on the wall.”

Today, Comerford and Lesser are working to shepherd history again. Warren has slipped from her high last Fall. Sanders has seen a surge, but breakout moments in this race—for Warren and Buttigieg in particularly—have prompted a wave of scrutiny.

The race remains very unsettled. Victory or a high-placing finish in New Hampshire will boost those campaigns, but the race is likely to remain competitive through Super Tuesday on March 3 when Massachusetts, among other states, votes.

“I think that is a really important message to get out,” Comerford said, referencing Warren’s emphasis on beating Donald Trump. “Warren sees herself as one of the people who want to step forward and take the country back from Trump.” 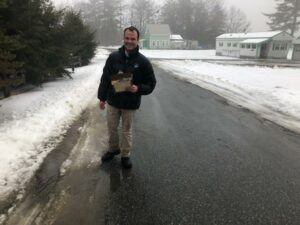 “Blessed” as Lesser himself might say, but soaked while canvassing last Saturday. (via Elizabeth Warren campaign)

Lesser opined that the dedication of volunteers on the bus for Warren was a good sign about the state of democracy.

“The bus left at 830 in the morning on Saturday in 35 degree temperature raining, and everyone is here. Everyone is positive. Everybody’s excited,” he said. “Everyone marched through rain, snow, ice driveways, on their day off for free, because they care.”