Our One Hundredth: Leveraging a Position in Hampshire County… 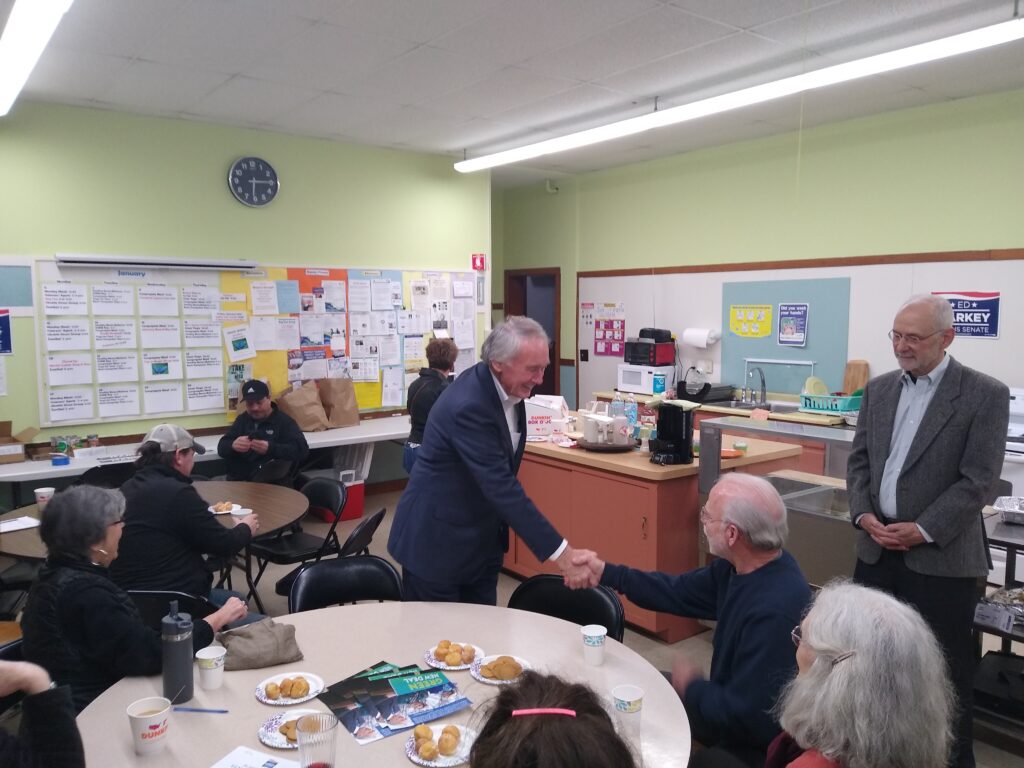 You can’t say Haydenville without “Hey!” Senator Markey in Williamsburg on Jan. 11. (WMP&I)

WILLIAMSBURG—The candidates for the Democratic US Senate nomination have been barnstorming the state since the race erupted last September. At this stage, neither have ceded territory favorable to the other, but patterns of support exist. How well they hold up could define the race.

Last weekend, incumbent United States Senator Ed Markey attended an organizing session with supporters here. The topics were many, but one seemed to traipse directly into the territory the senator’s opponent, Newton Congressman Joseph Kennedy, III, is making. A Markey supporter asked about Democrats winning the Senate and GOP obstruction.

“The idealized version of the Senate no longer exists,” Markey said. Frank Capra’s Senate from Mr. Smith Goes to Washington “is gone.”

As rare as votes on bills are, votes on amendments are even rarer along with the debates on them. “It’s to the detriment that these debates don’t take place.”

In addition to a debate about being present across the state, the Senate race has become something of a referendum on how best to utilize a Massachusetts Senate seat. The battle lines are easily drawn in some cases, but many Democrats are torn.

Markey’s appeal in Hampshire County and its students and progressive activists lies in his environmental advocacy embrace of the details of policy. Speaking to supporters he hoped to put to work, he highlighted accomplishments, even amid the Senate’s deterioration, on robocall regulations and additional funds for Alzheimer’s research. Such legislative victories, in addition to his position on the issues, are foundational to Markey’s effort.

With only a few areas of policy disagreement, Kennedy’s two-pronged argument focuses on showing up in the commonwealth and taking the fight to all parts of the country. The first—which implies Markey is absent and which his camp vehemently rejects—speaks to age-old geographic divisions of Massachusetts. It is particularly resonant in its farthest flung parts—Western Massachusetts. 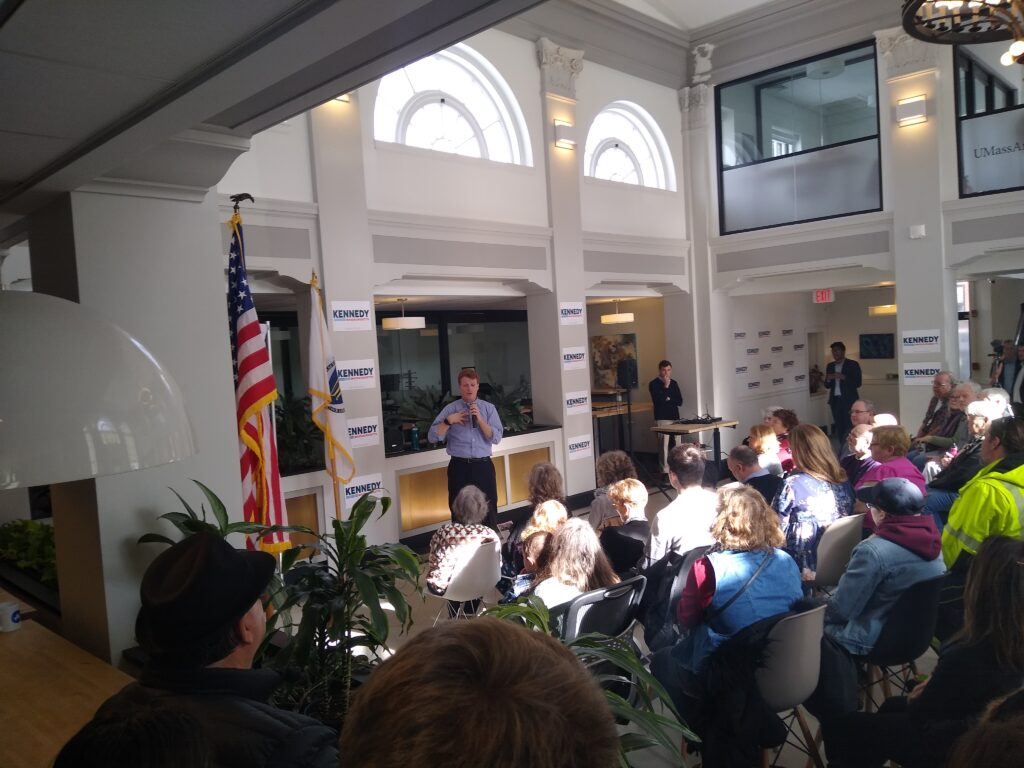 Joe Kennedy & friends (or at least interested parties) at Amherstworks on Jan 19. (WMP&I)

On Sunday, he told his town hall crowd in Amherst that a Massachusetts Senate seat can be leveraged beyond its 1/100 vote in the Senate. He pointed to Senator Elizabeth Warren’s accomplishments in her short seven years in the Senate, both legislatively, but also in building and supporting Democrats across the country. Kennedy noted his own travels last year to help elect the now-Democratic House.

Voting the right way and filing good, perhaps even expert legislation is not enough, Kennedy argued.

“I do believe that Massachusetts and the country needs leaders who are going to do everything they can to maximize their senate to lead us through it,” Kennedy said to a capacity crowd at Amherstworks, a bank-turned-coworking space.

Markey would certainly not characterize it this way. However, his superpower over four decades in Congress, first in the House and now the Senate, has been attaching supplemental legislation to other bills heading to the president’s desk.

Deliberative constipation made man. (via wikipedia)

That has become harder however, as the Senate has ground amid Mitch McConnell’s quest for power. As minority leader, he used the filibuster to halt virtually everything. As majority leader, virtually no legislation referred from the House has come to a vote—nor has the Senate proposed alternatives to bring to a conference committee.

This may play into Kennedy’s hands. He has called for the filibuster—a near-misnomer as bloviating/speaking on the floor is no longer required—and the 60-vote threshold need to override it. Markey told WMP&I he considers it an option, too.

Of all the 413’s four counties, Hampshire County may lean the most toward Markey. In addition to his environmental record, Markey’s emphasis on the granular has won plaudits from some of the county’s most prominent officials. Among them Easthampton Mayor Nicole Lachapelle, Northampton Mayor David Narkewicz, Jo Comerford, the Senator for the Hampshire, Franklin and Worcester District, and Rep Lindsay Sabadosa.

In October, Comerford stood on the steps of Northampton City Hall to highlight Markey’s help with a critical if prosaic issue: water-sewer infrastructure, a costly but essential endeavor for localities.

“The very first office to return our call and offer painstaking help was yours,” Comerford said, turning to Markey.

Mayor Narkewicz underscored Markey’s commitment to battling climate change. However, in a possible rejoinder to the nation Markey is absent from the 413, Narkewicz also highlighted Markey’s personal support for Northampton’s opposition to Donald Trump’s divisive and racist policies at a town hall there.

“Senator Ed Markey has always been there for the people and families in Massachusetts,” he said. 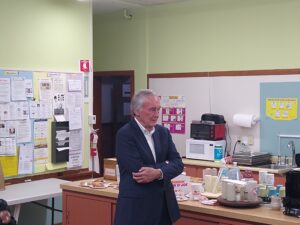 Both themes, wonkiness and presence, were on display last week at Town Hall here in the Haydenville section of Williamsburg.

Markey dove into the details of climate change efforts, including the Green New Deal (GND), and excoriated the inadequate briefings about the assassination of Iranian general Qassem Soleimani.

Global warming is on many Massachusetts voters’ minds, but in the 413, climate activists are particularly organized in Hampshire County. When asked how he was more progressive than Kennedy, Markey pointed to his environmental records and accolades, including his GND co-author, New York Congresswoman and progressive doyen Alexandra Ocasio-Cortez.

At one point, a supporter from the youth-led climate-focused Sunrise Movement, bounded into the room, to thank Markey for his work on the GND. A common refrain was shock that anybody would challenge Markey at all.

Still, there is the question about how to pass his agenda. Barring divine intervention, even a Democratic majority will face McConnell-orchestrated obstructionism.

In an interview with WMP&I last week, Markey acknowledged that, in effect, Senate rules and norms have changed or at least warped, shutting down lawmaking.

“The impact is that many issues just get stalled,” he said. Big issues like immigration are denied the “freewheeling debates” they need.

Markey said he would “absolutely” consider 86-ing the filibuster if there was no alternative. Though, he agreed there are probably enough votes in the Democratic caucus for that.

Rather, Markey argued a substantial Democratic win in November that displaces Trump and Senate Republicans majority could shake the GOP from its decade-long filibuster-happy posture.

“If that happens, we might actually be in a position that it makes it possible to pass big changes in in many areas of law in our country.” Markey said. “But if we don’t get those votes, but control the House and Senate, then I think that we have to put at the top of the list, just doing away with the filibuster so that we can move.”

Kennedy more effusively supports abolition of the filibuster, but the added fervor doesn’t change the arithmetic needed to change the rules. 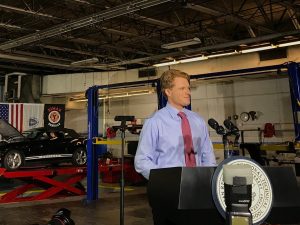 Some at Kennedy’s town hall mentioned his 2018 response to the State of the Union as one of the ways he was already out there for Dems. (via Twitter/@RepJoeKennedy)

However, his case about making the most of power could get under the nail with Hampshire County voters. Local Kennedy backers in Amherst have encountered interest, even in Markey country, in putting a Massachusetts Senate seat to work to win power across the country and by extension in Washington.

Ben Gilsdorf has an open mind on the race. An Amherst College junior and former College Dems president there, he admires Markey’s work on the GND. Yet, he also liked much of what Kennedy had said during his town hall in Amherst, including his engagement with a question Gilsdorf asked about the racial wealth gap.

This is a tension many of his classmates, who, like himself, are from Massachusetts, have experienced.

“A lot of people are really drawn to Senator Markey’s work in the green New Deal. I think climate change is probably the number one issue for young people,” Gilsdorf said.

On the other hand, Kennedy’s energy, willingness to advocate for Democratic causes and relative closeness in age has appeal, too. He also appreciated Kennedy’s explanation for challenging an architect of the GND, which Kennedy also supports.

“Instead of saying, you know, I’m going to try to replicate Senator Markey, we’re talking about how he himself has done things to try and move the cause forward,” he said.