Valentin Closes out Council Tenure While Going National with Warren… 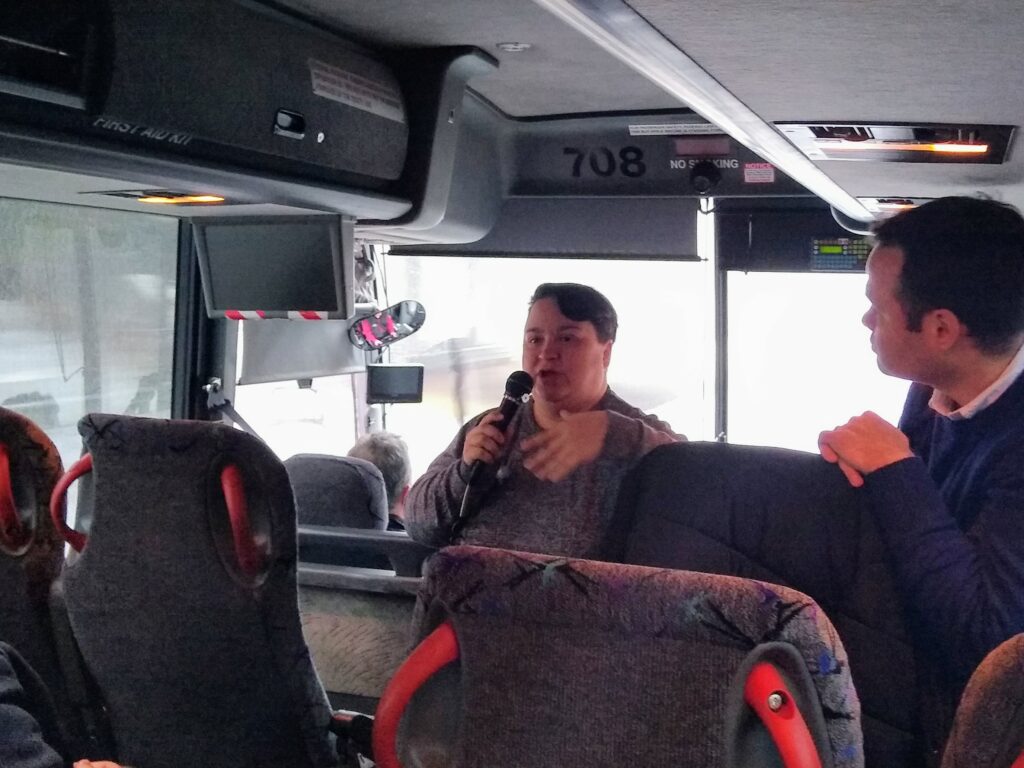 Jossie Valentin does a number (on door-knocking) while on the the bus to New Hampshire Saturday. Sen. Eric Lesser, one of the trip organizers, looks on. (WMP&I)

One year ago, Valentin quit her job at Holyoke Community College and became Massachusetts state director for Warren’s presidential campaign. An exhilarating ride has followed along with the conclusion of her municipal service. Notably, there is a through line between her Council tenure and her gig with Warren.

“She’s been a friend of Holyoke since the beginning,” Valentin said of Warren. “She’s a role model. She’s somebody who has been an ally and a champion for Western Mass and Puerto Rico, which are, you know, my two homes.”

In March, Valentin confirmed she would retire from the Council. She backed Libby Hernandez who won nearly 70% of the Ward 4 vote in November. Hernandez will be sworn in Monday. 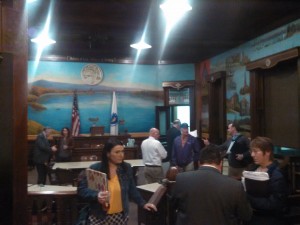 The Holyoke City Council chamber after a meeting in 2016. (WMassP&I)

Valentin is hardly the longest-serving councilor in Holyoke history. A predecessor of hers in Ward 4, Joseph McGiverin, now an at-large councilor, has served for 40 years. She served six. During that period, however, she came to embody both Holyoke tensions, but also its government’s potential to match the city’s changing complexion.

In an interview with WMassP&I at the front of the bus bound for New Hampshire, Valentin discussed her path through Holyoke politics. As the destination periodically peaked over the Connecticut River and through the trees, she reflected on her Council work and how it led to her sudden turn into presidential politics.

Dressed in a grey sweater and jeans for the Granite State’s chilly, rainy and slushy January weather, Valentin said her 2013 Council bid was her first real political experience in the Lower 48. While in college in Puerto Rico, she helped a friend’s mother on a state senate campaign.

However, politics were much different on the island than they were on the mainland. In addition to a different political landscape—the status of the island defines partisan differences there—the very culture of politicking was different.

“Politics on the island are so different than they are here. It’s very interactive, you know, we do the caravanas, which are driving around honking the horns,” she said.

“And then you get here and it’s like, door knocking. And it’s like, what?” Valentin continued with mock bemusement. “So it’s definitely, you know, a very different vibe.” She and others have imported caravanas to city elections.

Though, on this Saturday, Valentin and the Warren riders on the bus would be canvassing Granite Staters on the doors. After the February 11 New Hampshire primary, staffers like Valentin will focus on winning the Massachusetts primary on March 3 or Super Tuesday. 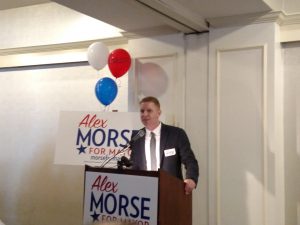 Mayor Alex Morse running for reelection in 2017. Valentin was a key supporter in each of his elections. (WMassP&I)

Valentin had backed Mayor Alex Morse during his successful challenge to an incumbent mayor in 2011. That exposed her to many of Holyoke’s needs and its lack of Latino and LGBTQ representation. She ran two years later. The incumbent, Jay Ferreira, ultimately did not seek reelection and Valentin won easily.

Both Latina and gay, Valentin has taken strong stances around issues of social justice and equality. That has not come without controversy. That is partly because many city politicos were not used to these issues being raised so explicitly. Plus, despite being heavily Democratic, demographic distribution and varying turnout have resulted in a Council that leans to the right of the city overall.

“Instead of controversial,” Valentin said, “I would hope that people can see it as moments that were brought to the spotlight that may not have been brought up if people like myself and Councilor Lisi and others that are more social justice/left leaning weren’t in those seats.”

It was not uncommon for her and her at-large colleague Rebecca Lisi to be the lone votes on some items and/or criticized, such as for participating in a Black Lives Matter march. Yet, those issues are not only what define Valentin’s tenure. 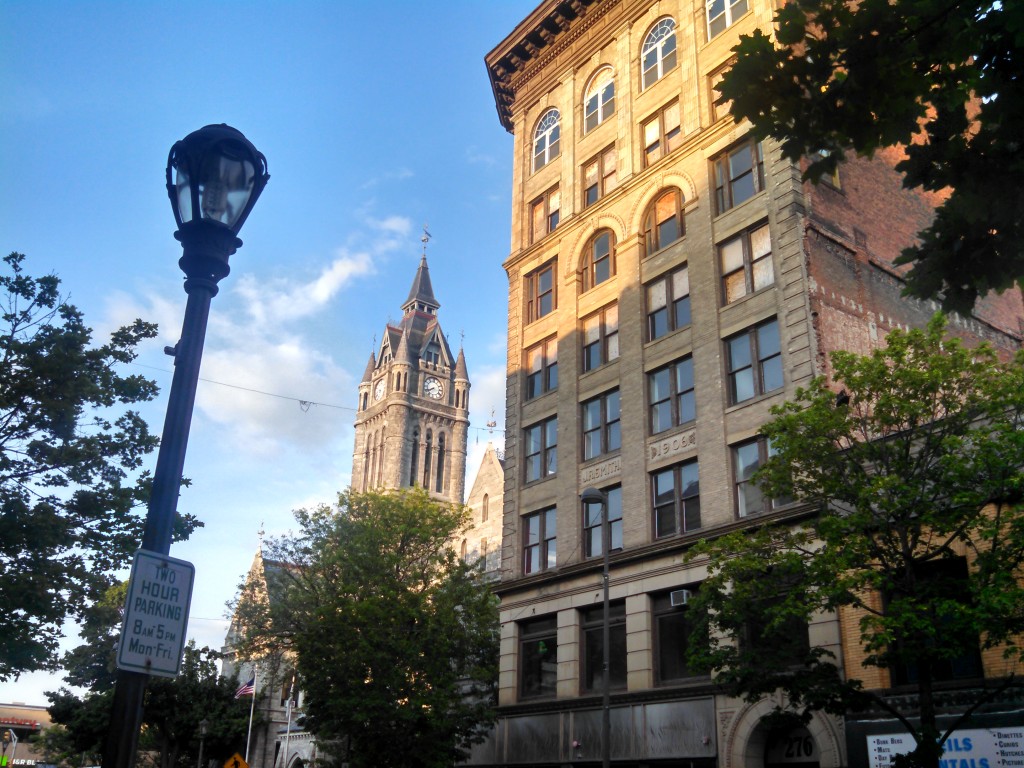 One of her proudest accomplishments was the local options tax, which came up during her first year in office. To Valentin, it stands as an example of the Council coming together to benefit the city and maintain services.

During the Great Recession, Beacon Hill passed legislation allowing communities to add and additional 0.75% taxes on meals. Despite opposition from some restaurateurs, it passed 11-2, three more than necessary with two councilors absent. Holyoke began collecting the tax July 1, 2014.

“At this point, it’s half a million dollars every year that come into the City of Holyoke for the infrastructure of the city,” she said. “And it’s literally pennies on people’s bills.” 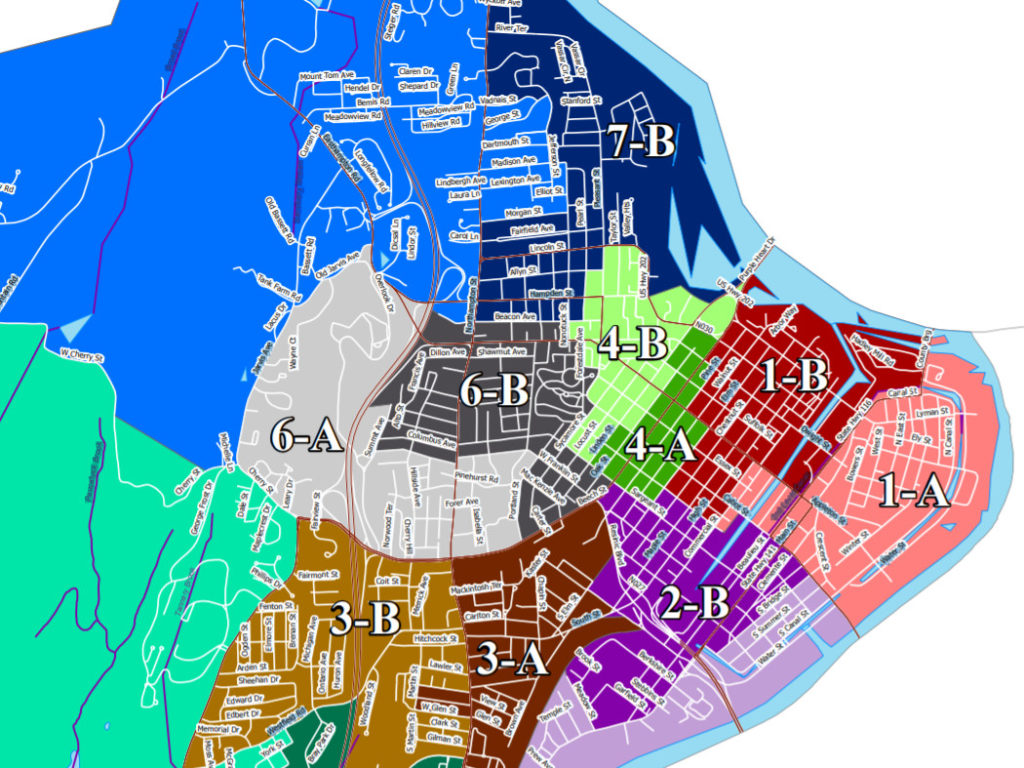 Holyoke Map of Central Wards. Ward 4 is in greens. (via Mass. Sec. of State) Click for larger image.

Valentin’s ward, where she lives with her wife Myriam and their children, lies just off downtown. Largely urban, it encompasses apartment buildings, historic homes, vestiges of industry and city facilities like the senior center. The population is a mix of longtime residents and newcomers attracted to the housing stock’s potential.

In Ward 4, quality of life issues stand out. For example, residents often complained of speeding on city streets, vandalism and abandoned properties. Maintenance of alleys, which are nonexistent in areas like almost-pastoral Ward 7, was another frequent concern. Communication is also key.

“I was one of the first people in Ward 4 to serve the district as a fully bilingual person. Just having access to me was huge” for many residents, Valentin said.

Valentin recalled working with then-Treasurer Jon Lumbra to identify property tax scofflaws in Ward 4. She personally sent letters to the owners, several of whom responded by agreeing to payment plans.

Still, Valentin suspected that she might have done as much as she could as a councilor. While she would have run for reelection last year absent Warren’s campaign, Valentin had planned to run for State Senate in 2020. The same lack of representation she once saw on the Council was a motivation.

That was before she got the job from Warren’s now-campaign manager Roger Lau. 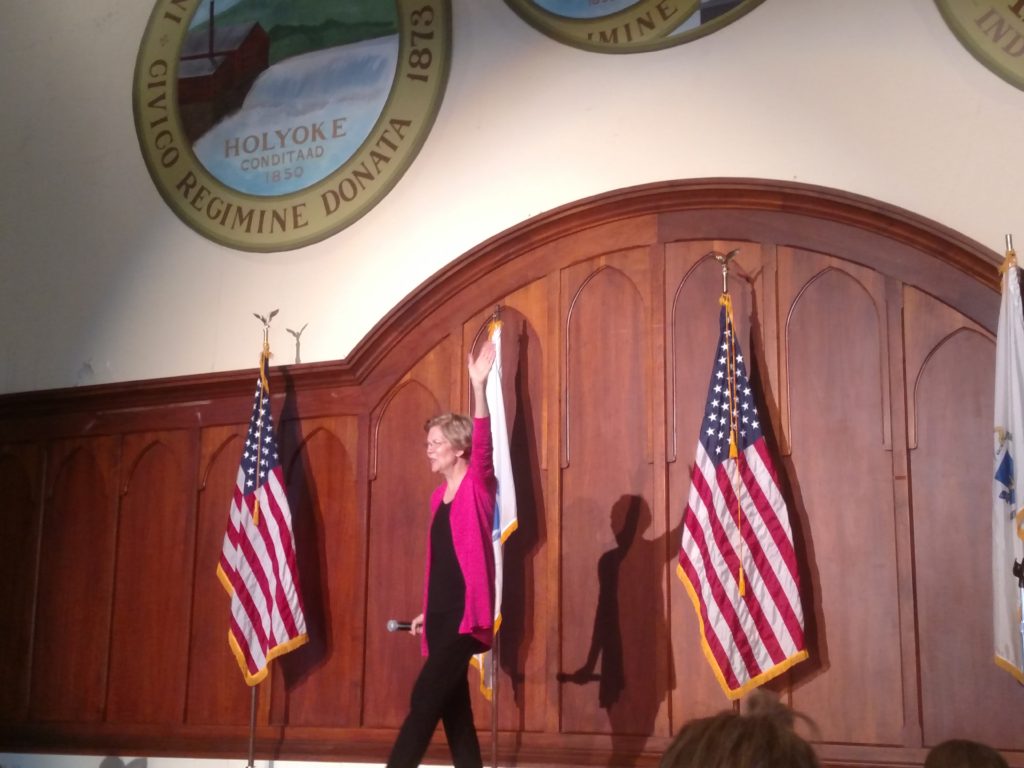 Sen. Elizabeth Warren in Holyoke in 2018 when she first announced a “hard look” at a presidential run. Paper City Warren supporters joke her campaign began here, not in Lawrence. (WMassP&I)

Although an unrepentant Bernie Sanders delegate, Valentin had long admired Warren and would have supporter her had she run in 2016. The outgoing councilor appreciated Warren’s work and her advocacy for Puerto Rico. The Holyoke councilor grew closer to Warren and her staff after Hurricane Maria devastated the island in 2017. Valentin led her own relief efforts and Warren questioned Donald Trump’s woefully inadequate response.

Warren’s campaign has Holyoke roots, too. While running for reelection to the Senate, she first declared her public interest in running for president as Valentin, who had been moderating the Q&A, looked on.

There was never any question whether she would want to take Warren’s offer. Valentin just needed to check in with her wife. 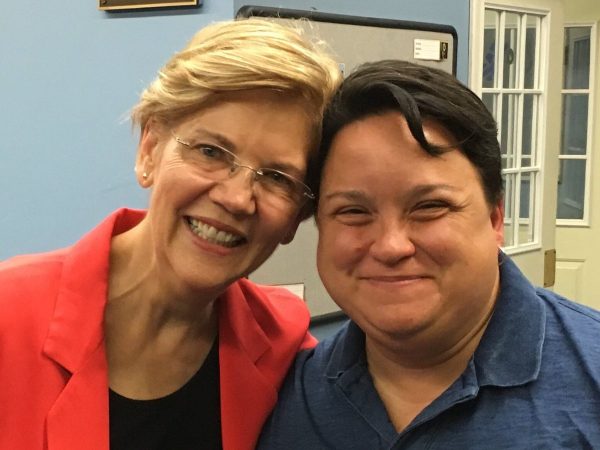 Selfie with the (now-)boss! Jossie Valentin with  Elizabeth Warren in 2018. (via Twitter/@jossievalentin)

Over the past year, in addition to her duties in Massachusetts, Valentin has had the opportunity to act as a surrogate in Houston and Miami at debates, particularly with Spanish-language media. Many of her duties mirror the work of a councilor or an HCC adviser. All involve reaching out and developing relationships.

If Warren became president, Valentin said she would love to join Warren in Washington.

However, aside from zero interest in one office many ask her about, Valentin doesn’t rule out a future run for something.  “I mean, I’m gonna leave the door open,” she said. “I wouldn’t say no.”

“But I do know that I do not want to run for mayor [of Holyoke],” Valentin added firmly, though with a smile.