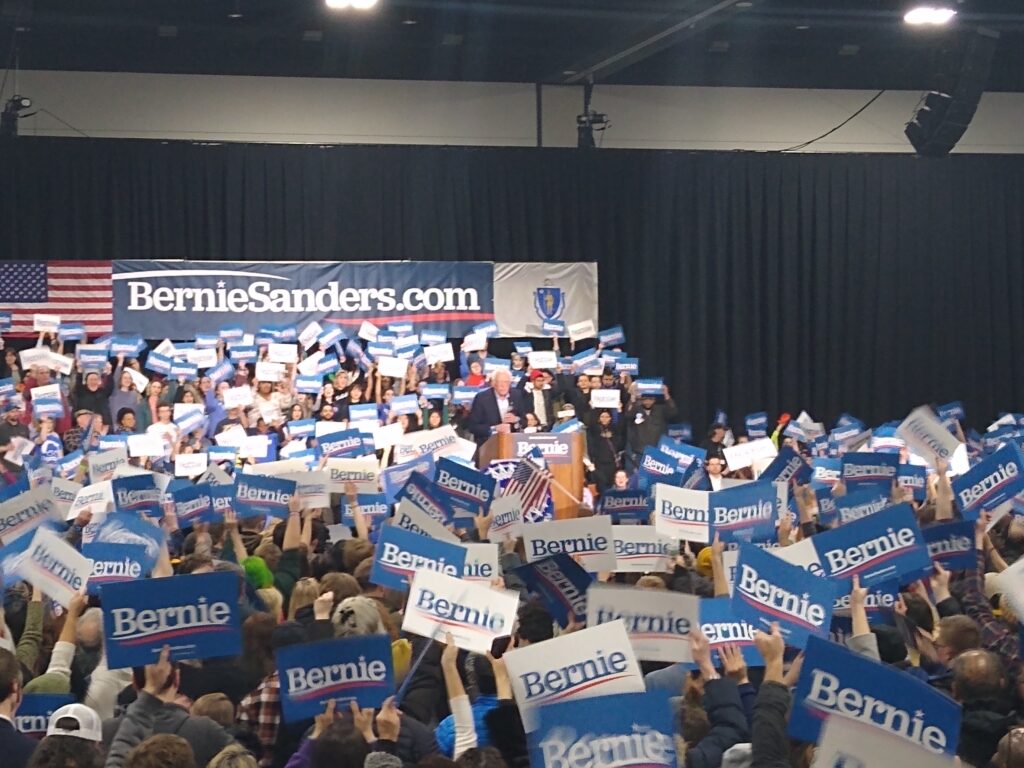 SPRINGFIELD—In a MassMutual Center exhibition hall behind the main arena, Vermont Senator Bernie Sanders headlined a raucous rally, one of two stops in New England ahead of Super Tuesday. Hitting on his classic campaign themes before a capacity crowd of 4750 of his closest friends, Sanders railed against Donald Trump and promised a slew of new programs including student debt relief, immigration reform and Medicare for All (M4A).

At numerous times, Sanders pleaded with supporters to canvass voters and urge peers to get out and vote. However, he and each of his speakers also took pains to emphasize his “multi-racial” and “multi-generational campaign.  The senator made that pitch while campaigning in one of Massachusetts’s most diverse cities. However, the speaking program included nobody from that city or who reflected its diversity, despite several Springfield elected and labor leaders being in attendance.

“This is a great generation, but it doesn’t vote in high enough numbers,” Sanders warned at one point.

Sanders’s visit here Friday night was the first of a two-stop tour of the commonwealth. Saturday held a rally in Boston on the Common under the looming State House. Massachusetts is one of 11 states voting this Tuesday—i.e. Super Tuesday—when about a third of delegates to the Democratic National Convention will be awarded.

Before former Vice-President Joe Biden’s win in South Carolina, Sanders had won or nearly won the preceding three state contests, making him the frontrunner. While talk of revolution has not completely dissipated, he has tried to emphasize some broader themes, including one that assuredly united Democrats: ending Trump’s presidency.

“What this campaign is about, number one we’re gonna beat Donald Trump,” Sanders said nearthe top of his speech.

Polling has shown Sanders is competitive with the state’s own presidential contender, Senator Elizabeth Warren. While the Sanders camp has told outlets like Politico his aim was to stimulate GOTV efforts, the visit was widely seen as an attempt to pull ahead here and nudge Warren out of the race following a defeat in her own state. Warren has betrayed not concern. In fact, Springfield Congressman Richard Neal endorsed her Friday night.

Sanders ramped up campaigning in Massachusetts rather suddenly, opening an office last Monday and summoning supporters from nearby states. Indeed, on Friday, the streets of Springfield were filled with Connecticut, Vermont and other out-of-state license plates, seemingly bound for downtown. Though, the MassMutual Center also hosted a hockey game simultaneous to the rally.

But in the scramble to bring the Sanders campaign up to a 10, it somehow failed to include any local voices at the rally. Sources close to the organizers said that the intention was to have a short speaking program to maintain a tight schedule. 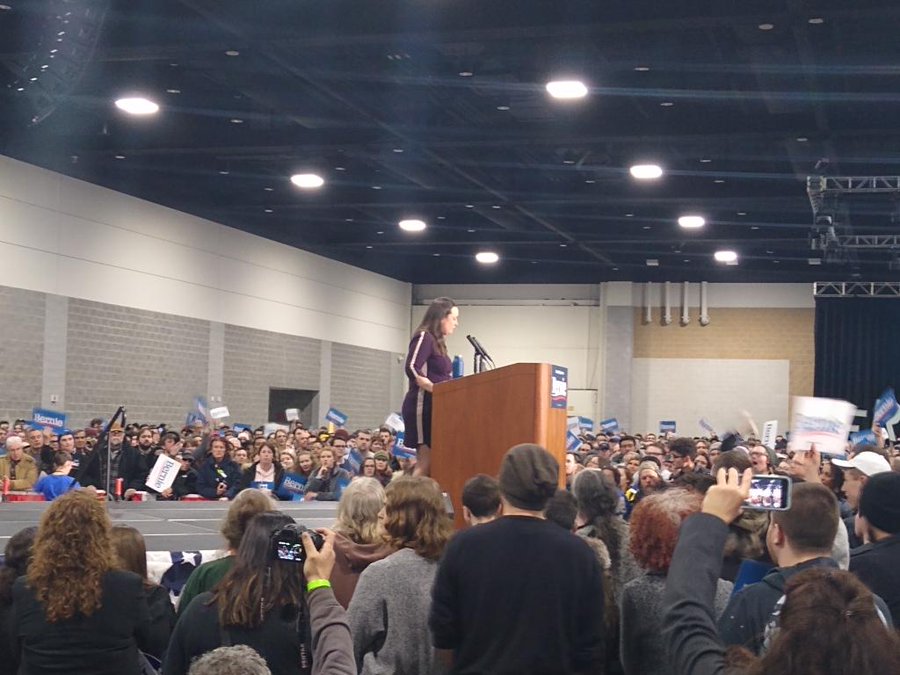 Rep Sabadosa’s warms up the audience with a Medicare for All number. (WMP&I)

All spoke to the dramatic change Sanders would bring if elected president. Sabadosa made an impassioned case for M4A, a single-payer healthcare system, citing stories of people who still had high drug costs and healthcare bills despite Massachusetts’s near-universal healthcare coverage.

“These are just some of the stories that underline where we have universal health cover, true healthcare remains unaffordable and inaccessible,” she said.

Sanders did not omit the issue in his remarks.

“We will end the national disgrace of being the only country on earth to not guarantee healthcare to every man woman & child,” he said.

While passion was not missing, any connection to the rally’s location remained elusive. In attendance were several prominent Springfield Sanders supporters including City Councilors Victor Davila and Jesse Lederman. The campaign had even plugged Lederman’s endorsement earlier that week.

Yet, neither of them nor other labor and political leaders from Hampden County were ever on stage Friday night. Not only were voices representing the minority-majority city missing, but the speakers were monochromatic, and none represented areas as diverse as Springfield.

Sanders has made considerable headway with Latinos as evidenced in his Nevada caucus win, though black support remains elusive. In South Carolina, blacks overwhelmingly favored Biden.

At-large Councilor Jesse Lederman can carry a tune at a rally. (WMassP&I)

The Sanders campaign, when asked why city leaders did not speak, only observed that three speakers were from Western Mass—the reps and Madeloni, who hails from Northampton. It indicated that two city councilors met with Sanders afterward, which WMP&I has independently confirmed.

Other than to reaffirm his support for Sanders, Lederman declined to comment.

Sanders’s speech did not contain any riff or mention of issues specific to Springfield or Western Massachusetts either. Sanders watchers say this is not unusual, though.

But Sanders did tweet opposition to an East Boston development earlier in the week, arguing it would prompt gentrification. The point divided his own supporters, but it was decidedly local and topical in Boston.

We need affordable housing for all instead of more gentrifying luxury developments for the few. I stand with the longtime residents of East Boston fighting displacement from the communities they have spent generations building. https://t.co/OGpZAD755O

Springfield had no such pre-rally shoutout, despite some matters receiving national press attention. One example is Mayor Domenic Sarno’s refusal, pursuant to a Trump executive order, to allow the resettlement of additional refugees in Springfield. Despite its diverse population, it joined the company of states like Texas and several blood-red counties to refuse new refugees. The Trump EO is stayed, meaning that resettlement can continue here, but an appeal is likely.

Sanders even made a point to mention immigration, though not refugees explicitly, during his remarks.

“We’re going to bring major reforms to our immigration system,” he said. Among the promises were a pathway to citizenship and restoration of legal status to undocumented residents brought here as children, better known as DREAMers.

Supporters certainly had plenty to rock out to, even as the speech aimed to spur supporters to get out the vote.

“I know the power of Wall Street. They are enormously powerful,” he said at one point. “The major problem is the limitation of our own imaginations of where we want to be.” 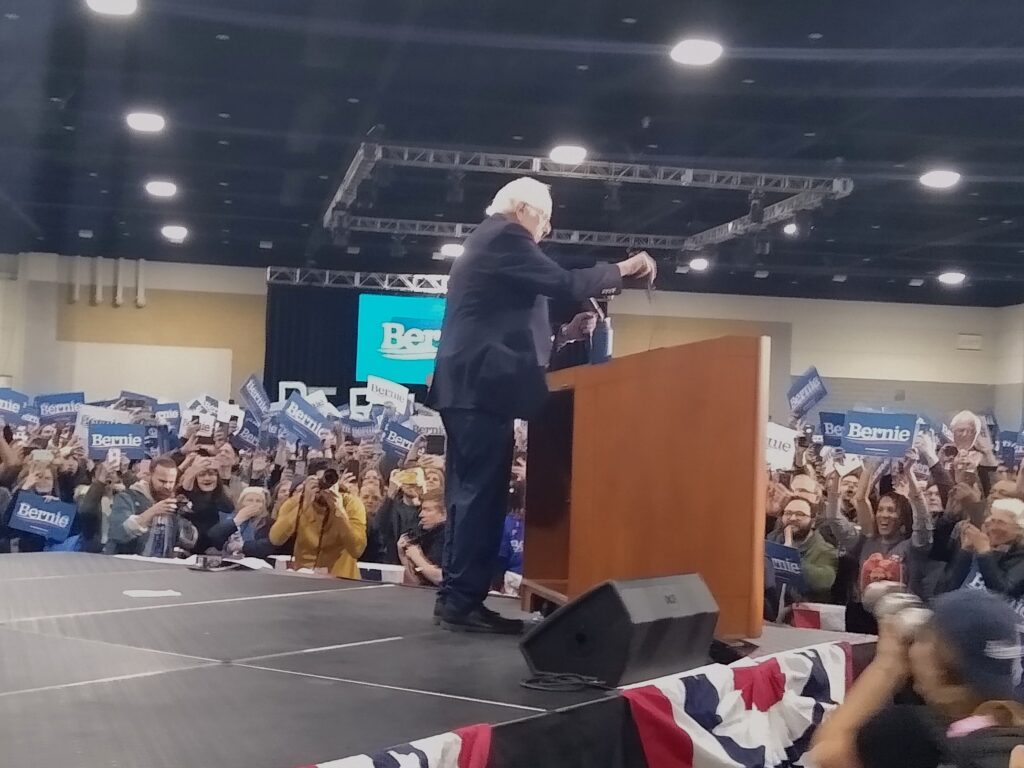 It will motivate supporters, but given the rally’s aloofness from its host community, its efficacy may be blunted. The same speech might have had more impact in Amherst, where Sanders held a rally four years ago, and where his voters probably need a firmer kick in the ass to turn out.

It was a point Sanders himself seemed to acknowledge, in urging his supporters, namely the younger ones, to get their friends out to vote, too.

“Many of your friends think that politics is bullshit, right?” he said. His supporters must tell friends to think beyond their rent, crummy pay or paying student debt. “Stop complaining!” he continued, “Tell them to get involved in the political process.”