Take My Council, Please: The Shroud of the Coronavirus Has Fallen…

SPRINGFIELD—Though less than 200 nanometers in size, the novel coronavirus behind the COVID-19 pandemic now casts a pall large enough to cover even Springfield’s iconic 300-foot Campanile. In the adjoining City Hall on Monday, the Council held its last live meeting in chambers for the foreseeable future to minimize spread of the virus, which can cause fatal respiratory distress.

Fittingly, the meeting began with a briefing from Health and Humans Services Commissioner Helen Caulton-Harris, who is one of the city’s most respected bureaucrats. Much of what Caulton-Harris said mirrored what other health officials across the country have advised. However, the consistency on the local level no doubt was appreciated among those in attendance.

“The biggest concern is our hospital systems being overwhelmed,” she said in her authoritative cadence.

Caulton-Harris is no stranger to Council meetings, often in attendance to present grants for her department. However, Monday night, she was there to offer some reassurance and explanation to wary officials and their constituents. 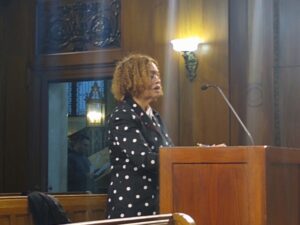 “We’re asking individuals if you’re feeling sick, stay home,” Caulton-Harris continued. That was not just about skipping work. It applies to medical visits, too. “Don’t just show up at the emergency room.”

Before she concluded, Caulton-Harris also noted the mental health component of what amounts to de facto quarantine for thousands of residents and their children.

“This not normal and certainly our children are feeling this,” she said.

The meeting had a hushed, apprehensive vibe. Councilors were spread out as Council President Justin Hurst later explained to maintain social distancing. Some councilors might have had to sit outside the rail.

As it happened, it didn’t matter as five councilors, some who had conveyed concerns to Hurst, were absent. They were Malo Brown, Melvin Edwards, Kateri Walsh, Marcus Williams and Tracye Whitfield.

Substantively, the Council’s agenda was light and moved quickly.

The body sent a Rules of the Road revision about horses to committee. Utility reports for both Comcast and Eversource, essentially permission to excavate a street, were accepted without much debate.

The Council also accepted a $240,000 increase in the Police Department’s at-risk youth program. It summarily accepted $8500 for parks. The Council also moved some money around to pay for snow and ice removal. A transfer of $85,600 was made within the Facilities Department for snow and ice removal. Unlike DPW, Facilities does not have authority to deficit spend so the transfer had to be authorized to pay contractors.

There was another $47,700 transfer to the School Department to allow the city to meet its obligation to match state education funds. There were some questions as to whether or not the Council could actually effectuate the transfer with only eight councilors. Normally a transfer across departments mid-year would need 2/3 of the Councilor 9 members.

The Council decided to take the vote anyway after City Solicitor Ed Pikula said he would investigate whether Governor Charlie Baker’s executive orders included any language waiving such a requirement. Baker’s COVID-19 orders have already touched municipalities by allowing them to sidestep the open meeting law to enable social distancing. 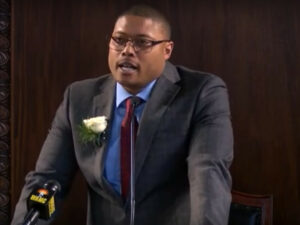 The Council postponed the balance of its agenda including permits, an unfinished ordinance and a bill that would establish a revolving fund for the city’s health clinics.

The meeting closed with Hurst confirming that there would not be any meeting in the chamber until at least May if not longer. Like many councils in the area, it would not be meeting in person so as not to risk COVID-19 spread. He noted that Mayor Domenic Sarno had, like leaders in many cities, closed City Hall effected the next day.

Although Baker’s order allows for board and commissions to meet remotely, they must maintain digital public access. Hurst had indicated Monday that a March 30 Council meeting would move forward if financial orders were necessary, but The Republican later reported that it had been cancelled.  The next scheduled meeting is not until May.

The Council is working with Focus Springfield, the city’s public access network, to figure out how the Council could use an online meeting platform to meet and vote down the line.

Hurst added that councilors would be receiving regular briefings from the mayor’s office about the state of the COVID-19 pandemic and its impact on the city. These were to begin the following week and while obvious for the moment, do represent a shift from mayor-council relations even on the coronavirus.

Before adjourning councilors asked Pikula to get them a rundown of the “sweeping powers” Sarno claims from his declaration of emergency.

With that, the meeting ended. Councilors and the few individuals allowed to attend filed out. The lights in the chamber always go off eventually after meetings although not right away. But Monday, within minutes of the gavel, the room was dark.