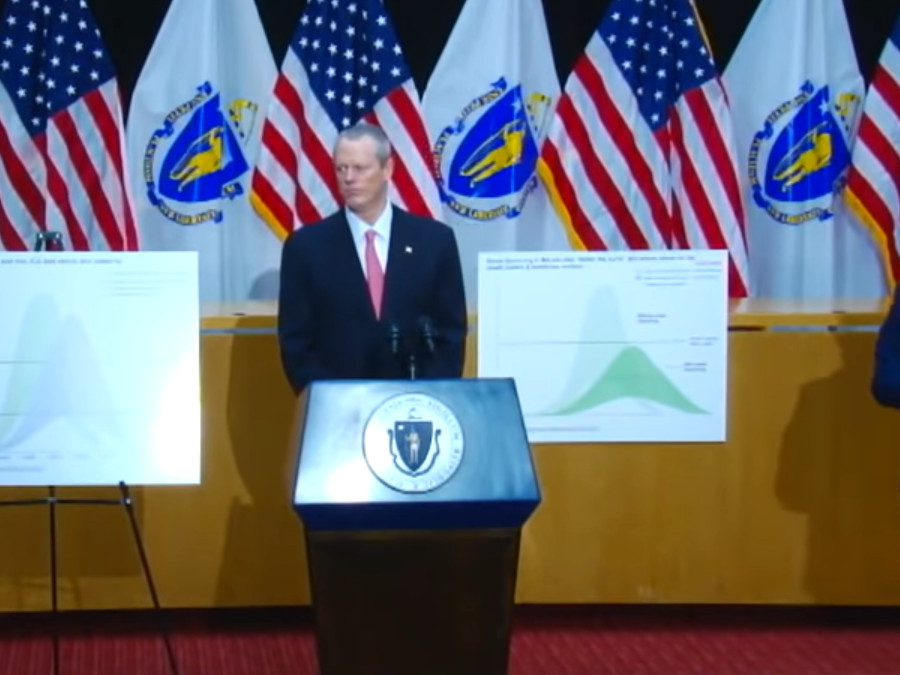 Via his regular updates in his not-quite dulcet tones, Massachusetts Governor Charlie Baker has become the central figure in the commonwealth’s response to the novel coronavirus ravaging public health and the economy. This has been the case with governors across the country, especially given the leadership black hole stationed at the White House.

But how His Excellency has done compared to his peers is harder to discern. On the one hand, he was mid-vacation when the situation escalated in early March. He came back early and by the following week, social distancing rules had ramped up. Yet, he never seemed as proactive as the West Coast governors, nor as in control as New York’s Andrew Cuomo. Baker’s above average, if not stellar response mirrors the strong reactiveness and middling proactiveness of his administrative style.

With a fast-moving public health crisis and poor direction from Washington, states have largely been on their own. It was not until mid-March that the Centers for Disease Control began strongly recommending such small gatherings that the operation of bars and restaurants became impossible. Illinois Governor J.B. Pritzker became the first to order his states’ eateries and watering holes to close. California ordered the first statewide shutdown.

Cuomo’s has not been especially proactive and his long-running rivalry with New York Mayor Bill de Blasio has not helped. With de Blasio Hamlet-ing on action, Cuomo should have taken an earlier lead the shutdown public events, bars and restaurants. But Cuomo seized control of moment. His press conferences are more human and rival Donald Trump’s on COVID-19, the disease the novel coronavirus causes. He doesn’t spare bad or terrifying details, but the truth can be oddly empowering.

Not number 1 on action, but Cuomo takes the gold on command performances. (via Wikipedia)

Baker doesn’t lie, meander of mislead as other chief executives have. However, there’s no denying that his presentations are not as gripping as Cuomo’s. This is partly because of their different political personas. Baker is a down to his bones bureaucrat with limited political skill. He speaks comfortably with jargon sounding technical notes.

Cuomo, who once ran his father’s successful campaigns for governor and won statewide office himself four times, channels emotions, a potent political skill. Emotion shouldn’t excuse his political ruthlessness and frequent tactical moderation, but those can easily fade during a crisis.

Cuomo may also have more latitude than Baker. It is not clear how expansive emergency laws are in New York, but some states’ are quite broad. In Connecticut, for example, Governor Ned Lamont has near-dictator authority to suspend virtually any law in ways he deems necessary to protect public health and safety. In Massachusetts, Baker has considerable authority, but it is broadest power is confined to public health. Thus, he needed the legislature to change things like unemployment rules or the tax filing date.

In his runs for governor, Baker had sold himself as the uber-manager Massachusetts badly needed. That pitch was largely bull crap, but Baker is a technocrat and especially a bureaucrat. That explains His Excellency’s tendency toward over-caution before said cow excrement hits the ventilation system. Afterward, he can and does take relative charge of situations.

The steps he took to lock down social situations—and with it, the economy—in Massachusetts offers a good example. Baker did not leap toward closures of bars and restaurants until the weekend before St. Patrick’s Day when it became clear that limiting occupancy wouldn’t be enough. It was Boston Mayor Marty Walsh who took some initiative, closing Southie establishments for Sunday brunch after they blithely ignored limits the night before. Baker’s shutdown order came later that day. 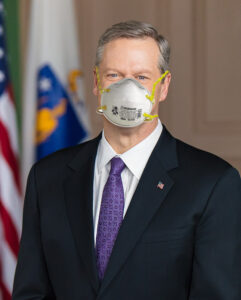 What me worry to soon? (created via wikipedia & Google image searches)

Baker also dithered on wider shutdowns on the economy. Mayors in Chicopee, Holyoke and Springfield shut down hair salons, barber shops and tattoo parlors—businesses often owned and staffed by residents there—well before Baker established a blanket closure for non-essential businesses.

However, that same caution rightly led Baker to resist calls for a lockdown in Massachusetts. While California Governor Gavin Newsom was right to order one, from a public relations perspective his shelter-in-place order probably prompted confusion and some panic nationwide.

In the first place, it was not a true lockdown—he only closed nonessential businesses leaving people no reason to leave the house. When Cuomo did something similar, he retitled it a Stay at Home order. Rhetorically, a minor switch, but it may have staved off panic.

Likewise, Baker never ordered shelter-in-place or a lockdown. To do so would have likely prompted a run on grocery stores—and the soon-to-close nonessential businesses—further endangering public health.

That caution was good. Yet, the caution to not close other businesses sooner, like salons and massage parlors could have prevented unnecessary spread, perhaps more so than even closing normal retailers.

Baker’s firm response to the crisis at the Holyoke Soldier’s Home is another example. On Monday, Baker’s administration removed Bennett Walsh as the facility’s director after it was learned several residents may have died from coronavirus. At least 12 have. The move came after the intervention of Holyoke Mayor Alex Morse, working off a tip about unreported deaths there. For his part, Bennett Walsh claimed that he informed higher-ups as soon as he learned of the problem. Again, the reaction is praiseworthy. However, with nursing homes a persistent problem in the COVID-19 crisis, one must wonder whether there was enough oversight from Baker, Sudders, and Veterans Services Francisco Urena in the first place. The Chelsea Soldier’s Home had a coronavirus death, too, but no accusations of protocol violations have been alleged.

The fact is that politics and funding at the Holyoke home have been a persistent problem for years, even predating Baker’s inauguration in 2015. This is despite its otherwise good reputation among patients and families. Since the facility is steeped in local politics—pols from throughout the 413 have their hands on the facility—has Baker & friends been keeping the proper eye on the place, especially in the age of COVID-19?

Public health experts are at the @HolyokeSOHO conducting a thorough review of the health status of staff and residents to plan appropriate next steps.#COVID19MA

The story of the Holyoke Soldier’s Home will come out, but how much freedom Pearlstein has to do his investigation will be crucial.

Finally, Baker deserves credit for trying to do what many states have seemingly abandoned until new case numbers fall. He has pressed ahead to make Massachusetts one of the most prolific testers of COVID-19. In the absence of a cure or vaccine, widespread testing and tracing COVID-19 cases is the only way to reopen the economy without exposing the medical system to another surge in cases.

Overall, Baker has done well-enough. He has been nowhere near as feckless, cowardly and moronic as the governors of Florida, Georgia and Texas, all Republicans like Baker. Nor has he come across as the reassuring force Cuomo has. His caution has cut both ways, but it left him trailing governors like Pritzker and Ohio’s Mike DeWine, a Democrat and Republican respectively. But the testing accomplishments could put Massachusetts on solid footing for the future.

Nonetheless, once all this passes, some assessments will be called for. Every state will be reconsidering its public health emergency plans, but Massachusetts will be looking at the Holyoke Soldier’s Home. It should also autopsy the governor’s initial response to the super-spreading Biogen event and whether more could or should have been done then.