The Coronavirus Looms over Campaigns up & down the Ballot… 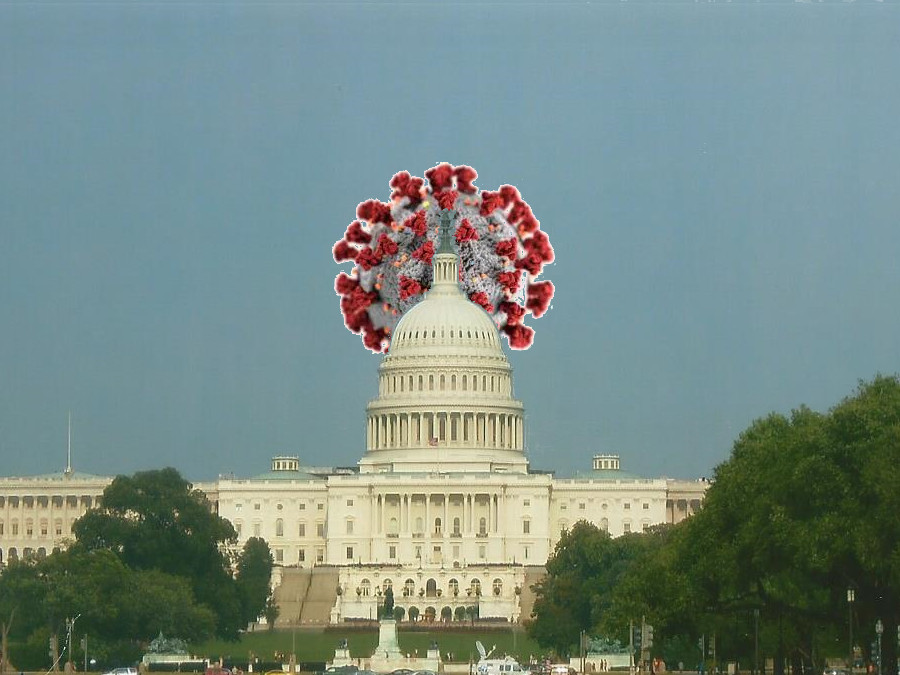 A looming thread to elections to federal and state offices. (created via WMP&I and Google Image search)

The video opened with 90 seconds of tropical elevator music before cutting to a split-screen of US Senator Ed Markey and Association of Flight Attendants President Sara Nelson. “Hello! And I hope you’re all staying safe,” he said opening their discussion about protecting airline workers. “Hope you’re all staying socially distanced from each other.”

On another day, the feed began with Newton Congressman and Senate candidate Joe Kennedy, III sitting down after turning on the camera.

“Hey everybody, thanks for checking back in,” he began before answering questions from his remote audience the Defense Production Act to explaining the COVID-19 outbreak to children.

Such is campaign life, with varying degrees of production, in the COVID-19 era. Normal activities are off-limits. Gathering signatures at caucuses and supermarkets is out, creating existential crises for campaigns. Door-knocking is verboten. With the economy cratering, fundraising can seem gauche. Virtual events, wellness checks with volunteers and emailing lists to support relief efforts are in vogue.

“The kinds of things that you’re observing with [the campaign] is a number of weeks of putting our heads around this,” Markey campaign manager John Walsh said of adjusting to COVID-19 restrictions. 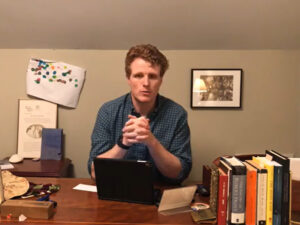 Markey’s campaign has observed his pace continued since raising alarms about the coronavirus in January. In online appearances, Kennedy often notes the time spent on the phone trying to get equipment for health care personnel.

“There’s a lot of issues you have to balance [in Congress] and those needs are always present and urgent, but you’re now dealing with the potential spread of a pandemic, every single day across the district or state,” Kennedy said during one of his last in-person interviews before Massachusetts began shutting down.

“All three of them won because they went everywhere,” he said in an interview. 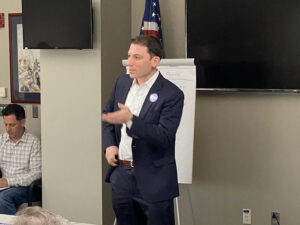 That was his strategy, logging 16-hour days traveling the 4th district, which undulates from Brookline to Fall River. The outbreak shifted everything online to protect district residents’ health and safety, Cavell explained. Zoom meetings and streamed events with health experts are the norm.

Down ticket candidates have less capacity to produce online content to substitute for in-person events.

“That’s not possible at voters’ doors for the time being and it’s unclear when that will change,” he said in a Facebook message. “It means seeking that meaningful engagement through alternate means.”

Denise Hurst, a third-term at-large School Committee member in Springfield, is also seeking the 9th Hampden seat. Though no stranger to campaigns, COVID-19 has made this year’s like no other. 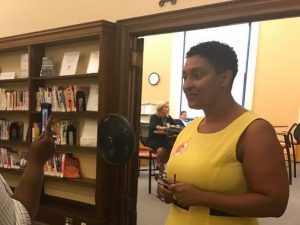 Denise Hurst running for reelection to School Committee in 2017, a simpler time. (via Facebook/Hurst campaign)

“Of course, this campaign looks a lot different than any other campaign I’ve been involved because our new normal is something that no one has ever really experienced,” she said in an interview.

Like other officeholders a lot her time is spent assisting families coping with closed schools and an anesthetized economy.

In the nearby 7th Hampden district centered in Ludlow, James “Chip” Harrington, that race’s lone Republican, acknowledged there wasn’t much to do right now.

“The best way I can be useful is sharing information that Governor Baker has or that’s coming out from the CDC,” he said.

However, his campaign is thinking about what the next moves might be once things start to loosen up.

“Thankfully with technology, I’m still able to talk to multiple people at once,” Harrington added.

Zoom, the online meeting platform, has become a lifeline for many campaigns.

“As soon as things started to pick up with respect to COVID, we stopped all offline activities.” said Max Clermont, campaign manager for Holyoke Mayor Alex Morse who challenging US Rep Richard Neal. 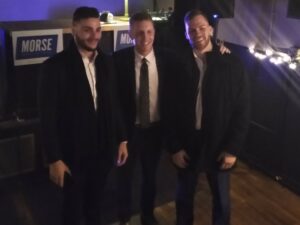 Mayor Alex Morse with supporters, technically in December 2019 but it feels like decades longer ago. (WMP&I)

Clermont is no stranger to campaigns, including Morse’s mayoral bids, but his background is in public health. Pandemics were the thing of textbooks.

“I didn’t think I’d be managing a campaign during a pandemic. My two worlds coming together,” he said.

Morse’s campaign has used Zoom and social media to reach supporters and brainstorm about how to check on people less comfortable with technology.

Markey and Kennedy have done the same.

Like his colleagues running for US Senate, much of Neal’s time has been taken up with COVID-19 issues, in Congress. However, he also holds a top leadership post int eh chamber Democratic control.

Rep. Neal, when committees could meet without risking a public health hazard. (via YouTube/Ways & Means Cmte)

As the chair of Ways & Means Committee, which oversees healthcare and unemployment, he often sits across the negotiation table from Treasury Secretary Steven Mnuchin.

Some candidates are considering how the outbreak could shape them in office.

Cavell said the crisis had not changed his priorities, but has underscored the need.

“The truth I think this crisis has revealed the urgency of a lot of underlying issues that were already central to the campaign and the work we needed to do,” he said.

“The glaring thing for me has been around preparedness as a commonwealth with respect to access to remote learning and what that looks like,” she said.

One thing COVID-19 has not upended in Hurst’s race is ballot access. Another rival, Ward 8 Councilor Orlando Ramos announced his ballot certification in early March. Hurst told WMP&I she was certified and Mullan said he would have enough signatures. 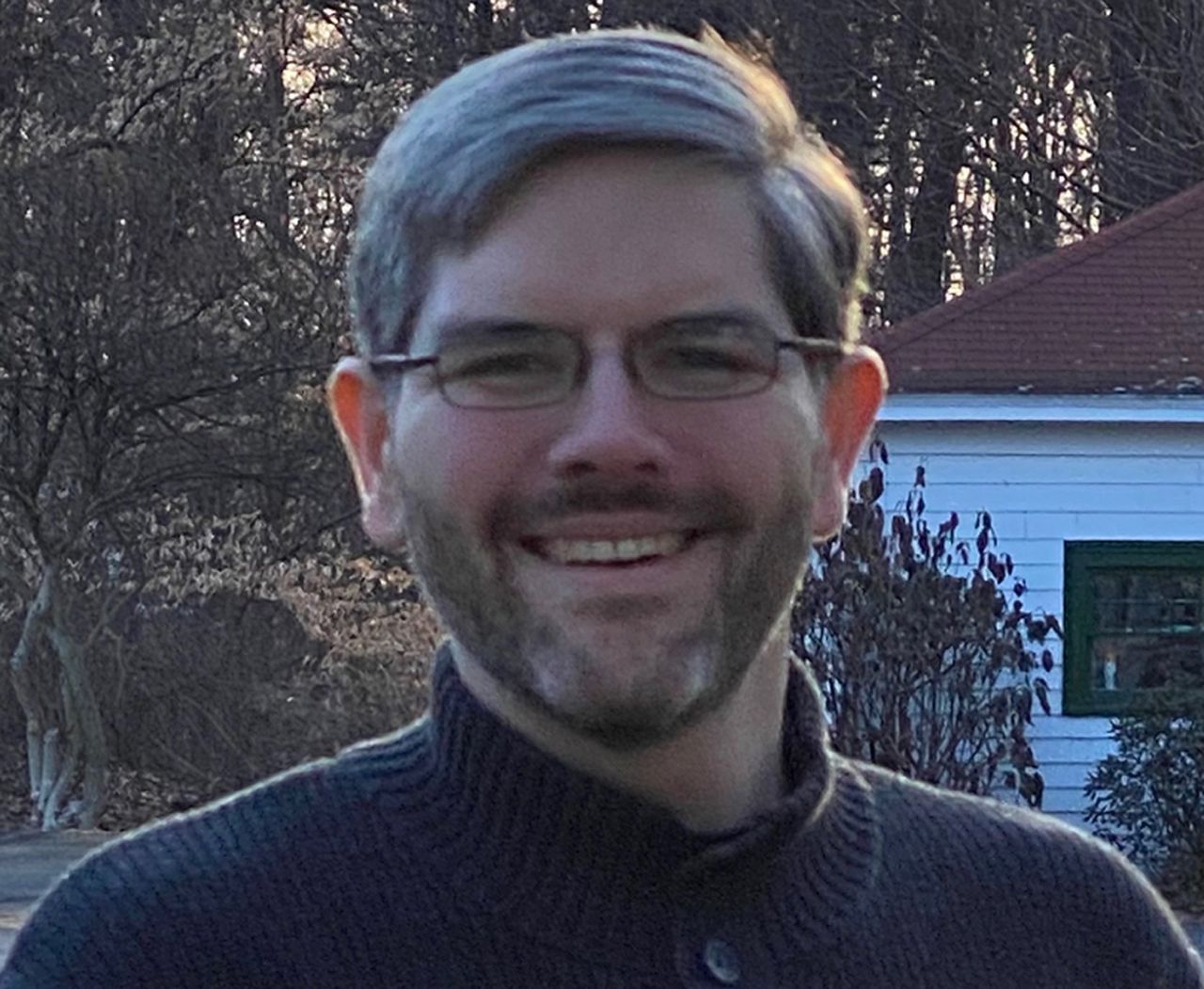 Sean Mullan, when zoom lenses were not necessary for headshots. (via Masslive/candidate submitted photo)

“If I hadn’t started early, I could see it being stressful to get signatures,” Mullan said.

Others started early, too. Jake Oliveira, a Democratic candidate for the 7th Hampden, said he would have enough signatures. His primary opponent, John DaCruz, did not immediately return an email inquiry. Harrington, the Republican in the race, was also confident, adding he got a good start early.

Patrick Beaudry, running in Holyoke’s open rep race, confirmed he had his signatures in. In an email, another candidate, David Bartley, did not comment about his signature-gathering, but also demurred at changing the process.

“There is no flexibility in the deadlines or the method by which papers must be submitted and certified,” emailed Debra O’Malley, spokesperson for Secretary of State Bill Galvin. “We have tried to offer whatever suggestions we can, within the bounds of the law, about gathering and submitting nomination papers during this time.”

State and federal candidates must submit their signatures to local election officials for certification by April 28 and May 5 respectively.

O’Malley said the Secretary’s office has made suggestions like leaving signature sheets on porches for voters to sign. Patricia Duffy, another Holyoke Rep candidate, did exactly that. On Thursday, Duffy told WMP&I she was submitting her signatures to City Hall.

Sec. Bill Galvin, likely at a time when the only challenges to getting on the ballot came from suspiciously well-funded citizens. (via Twitter/@BillGalvinrMA)

Nevertheless, legislation to cut the signature threshold or move deadlines is pending. A bipartisan group of candidates for various offices is suing Secretary Galvin for changes given the outbreak. Politico first reported the suit.

In Cavell’s race out east, the field is split among those with sufficient signatures according to WPRI. Cavell told WMP&I he was on his way to getting the necessary signatures. However, he supports changing the threshold and/or deadline to mitigate the choice between public safety and participating in the democratic process.

“This crisis is one of the biggest threats to our democracy and we need to adapt to that,” he said.

United States Senate and House candidates must submit 10,000 and 2000 signatures respectively to dozens or hundreds of local election offices. Each have different policies for receiving paperwork during the outbreak.

“We have enough signatures collected and certified to secure a place on the ballot, and we will work with city and town clerks as they are able, recognizing the unprecedented challenges they are facing right now,” said a spokesperson for Neal.

Neal is believed to have submitted at least several hundred signatures with well more than a thousand in transit to election offices or in hand.

Likewise, a Kennedy spokesperson confirmed his campaign had collected and is submitting 15,000 signatures.

Markey has work to do. The Boston Globe reported Tuesday Markey only had 7000 signatures.

Walsh was not worried, though and touted the campaign’s “relational organizing” efforts. Markey’s campaign has been emailing supporters to sign the senator’s papers and ask others to do the same. It has also produced a video explaining the process.

It takes less than a minute to help me get on the ballot. Go to https://t.co/YcY1QgHeCV and join our movement. pic.twitter.com/srmyIIJ2qr

“We have some 4700 people who have not just said they’re with Ed but done something for him,” Walsh told WMP&I. “If there’s any way to consider ourselves blessed, we’ve been fortunate to have built a model that works.”

Morse’s campaign manager admitted ambitious signature goals were waylaid by COVID-19. Clermont did not enumerate their signatures thus far, but he was confident Morse would be on the ballot.

“We’re very close if not there already,” he said. They said they are connecting with supporters and mailing additional papers as needed. “We’re not losing sleep over it.”

Like Markey, the Morse camp has made an appeal to supporters, in this case through Facebook, to receive and circulate signature sheets.

While the outbreak limits campaign activities, down ballot candidates may bounce back long-term depending on how long restrictions last. Voters often do not tune in until the last weeks before the primary, which is September 1 this year.

The situation is less advantageous for the ticket-toppers. Some like Morse and Neal are in the news frequently or have held COVID-19 updates. Last month, Neal held a pair of telephone town halls with doctors from largest health systems in Springfield and Pittsfield.

The Senate candidates though have lost in-person town halls and the convention as potential earned-media events.

Earlier on Thursday, Kennedy spoked with Chelsea city leaders about the disproportionate effect COVID-19 has had on communities of color. Markey had a conversation scheduled with Jim Steyer of Common Sense Media about protecting children’s online privacy during remote education.

Communities of color have been ravaged disproportionally by COVID-19 | Emergency Frontline Broadcast https://t.co/PDEv4A6pFI

In addition to Nelson, the AFA president, and many other labor leaders, Markey has spoken with the actress (and climate activist) Jane Fonda and his former rival labor attorney Shannon Liss-Riordan. Both Kennedy and Markey have hosted of local officials and medical professionals.

Hmm, are they talking about protecting airline workers? (via Facebook/Markey campaign still)

Not all streamed events featured heavy topics. Markey recently welcomed Bob Ryan, a Boston Globe sportswriter, to discuss—lament?—sports when none seem possible. Kennedy, assisted by his wife and two young children, tried to make soy cola chicken with the help of Chef Tiffany Faison via.

This digital engagement will never be a substitute for in-person campaigning, which appeals, literally, on a human level. But it may prove useful in another way. Many of these notable guests might not be available for an in-person event or, absent COVID-19, have little reason to engage campaigns like this.

The distribution of information and, perhaps, comfort is never bad in these times.